What’s happening to the U.S. Gulf Coast is difficult to exaggerate and even more difficult to ignore. Floodwaters from Hurricane Harvey have killed several people and displaced countless others. Situated higher in the Hill Country, Austin has been spared the worst of what Harvey has wrought in cities like Rockport, Houston and Corpus Christi. But it is near enough to the coast that most of us who call it home know someone afflicted by this particular natural disaster. In a way, it has become personal to us. Communities – and in the United States, states are absolutely communities – are funny like that.

Nature, of course, is indifferent to communities. It is ignorant to the objects of our study here at GPF. It doesn’t recognize the strategic imperatives of the United States any more than it recognizes those of China, which, like Texas, is currently a victim of nature’s capricious power. Typhoon Hato, which earned a signal 10 – the highest possible rating in Hong Kong’s classification system – struck the region Aug. 23. The South China Morning Post described it as “the worst typhoon that Macau has seen since 1968.” Typhoon Pakhar, which earned a signal 8 rating, hit the region a few days later on Aug. 27.

At GPF, we presume to chart the course of international events because, if you know where to look and how to interpret the data, the behavior of nations is predictable. Their behavior is predictable partly because it is anchored to impersonal forces. The Himalayas, a stalwart fixture in southern Asia, shape relations between China and India. The North European Plain – the superhighway for military invasion – has defined European politics for centuries and will define it for many more. Changes to these kinds of fixtures come slow, if at all.

Natural disasters like Harvey and Hato are unpredictable. (Advances in meteorological technology clue us in to general arrival times and broad behavior, sure, but even as late as this week no one could confidently say whether Harvey would turn east or west.) They come quickly and, compared to great plains and mountain chains, leave just as quickly. Put simply, there are things that cannot be accounted for ahead of time. Think about Japan’s bad luck at the Battle of Midway. Remember Gen. Robert E. Lee’s miscalculation at Gettysburg. Recall Mount Tambora, whose eruption in 1815 would destroy crop harvests around the world, giving the world in 1816 what would be known as the Year Without a Summer.

No matter how diligent or rigorous we of GPF are, there are circumstances we will not be able to anticipate, and the only antidote for that is to be quick to recognize when those circumstances are upon us and to correct our course accordingly.

Hurricane Harvey, and the concurrent storms of southern China, are serious enough to consider whether they qualify.

A Challenge in Relief

Let’s consider, then, the geopolitical importance of the storms that have stricken China and the United States, the largest economies in the world. We’ll start with China. The importance of these typhoons stems not from the tragic deaths and injuries resulting from the storm – although they are indeed tragic. Their importance stems not from the economic fallout – sure, it’ll be a costly reconstruction process, estimated by some to be roughly $1 billion, but China can afford it. Their importance stems not from trade – none of China’s most important trade infrastructure was harmed by Hato and Pakhar. Their importance does not even stem from location – though the most affected areas, Hong Kong and Macau, are vital to China’s economic interests, they serve mostly as a means to access capital markets. It is easier to rebuild a broken stock market than a broken port.

No, the geopolitical significance of these storms results from the political situation they created. In between landfall of the two typhoons, 1,000 People’s Liberation Army troops left their garrison in Macau and took to the streets, at the behest of Macau’s chief executive, to assist with clean-up operations. Though Macau is part of China, it boasts an autonomous government, so the deployment of troops is no small matter.

Of course, disaster relief is not the same as a military invasion, and the deployment can hardly be seen as an act of aggression. But it brings into relief one of China’s most pressing political challenges: managing its special administrative regions. Over the past week in Hong Kong, one such region that is particularly suspicious of Beijing’s intentions, tens of thousands of protesters demonstrated against the arrest of democracy advocates. Though technically a separate issue from the situation in Macau, many protesters believe the troop deployment sets a precedent for losing more of their own autonomy. (Tellingly, Hong Kong reporters have been banned from entering Macau.) It’s unclear whether their suspicions have any merit, but Beijing certainly wants to enhance its control over these territories, and the typhoons have given Beijing pretext to deploy troops.

Hurricane Harvey is more geopolitically relevant than Hato or Pakhar are. Harvey hit the heart of the U.S. oil industry. So far, Harvey has shut down 11.2 percent of U.S. refining capacity (about one-third of all U.S. refining capacity is in Texas’ Gulf Coast) and roughly 25 percent of U.S. oil production from the Gulf of Mexico (accounting for about 20 percent of U.S. crude production). It has also closed all ports along the Texas coast. Based on current refinery operations, it is estimated that anywhere from 1 million to 2.2 million barrels per day of refining capacity are offline, as well as just under half a million bpd of production. The U.S. has been producing around 9.5 million barrels per day, and in general, U.S. production has beaten 2016 Energy Information Administration estimates for 2017 production. This production has played a major role in keeping global oil prices low, in turn hurting oil-dependent countries like Russia and Saudi Arabia. 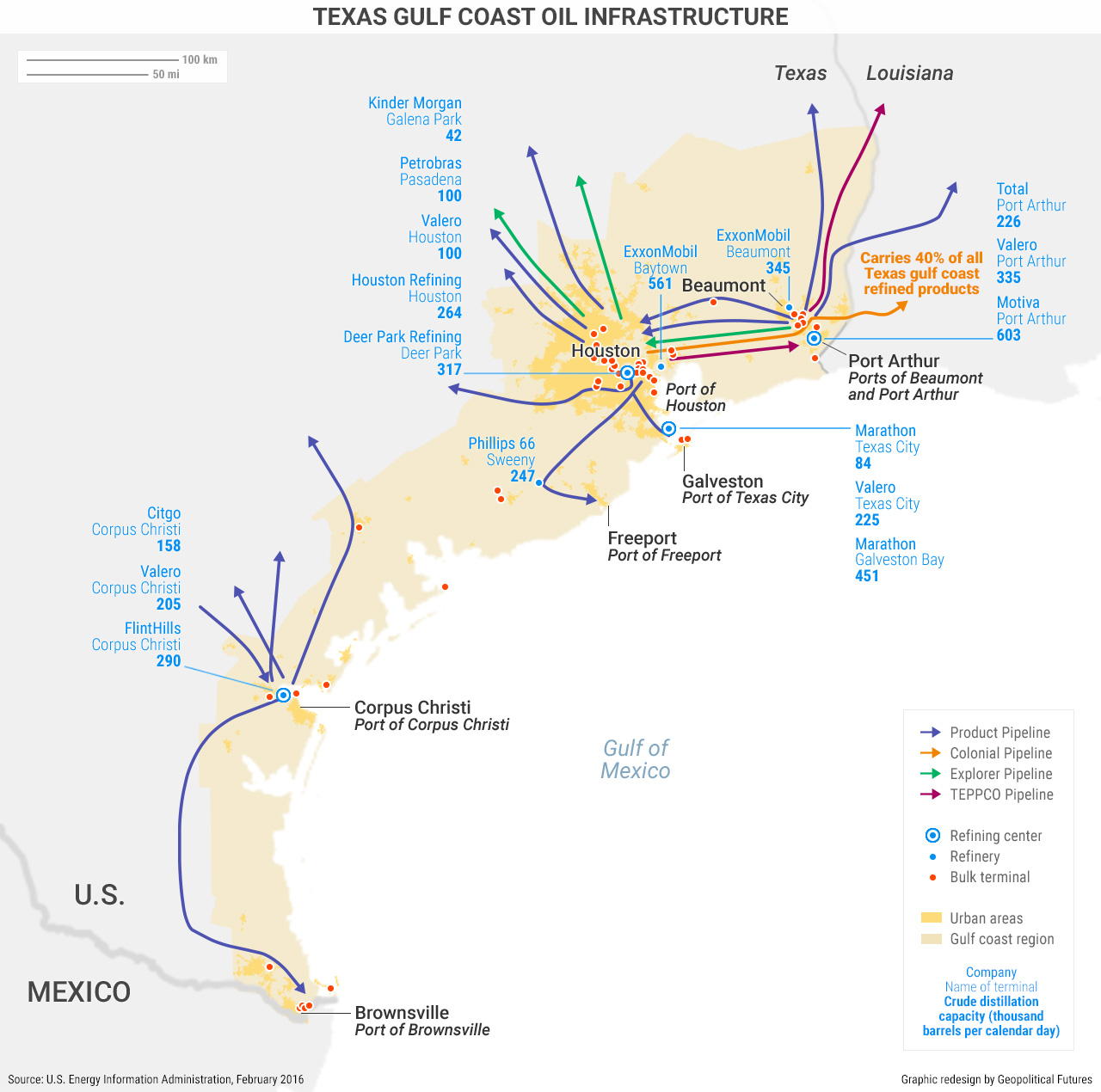 Harvey’s impact on U.S. oil production will be temporary, even if it is severe. In the short term, though, it could be globally significant. The storm has stalled out over Houston and promises to dump more and more rain over the area. If it damages the Colonial Pipeline – which transports more than 40 percent of the Texas Gulf Coast’s refined product, according to the EIA – U.S. consumers would not only have to pay more at the pump, but U.S. policymakers would have to deal with Russia, which would greatly benefit from even a momentary spike in prices. It won’t be clear what will happen to oil prices until we know what kind of damage coastal facilities have sustained, but the possibility of higher prices can’t be ruled out.

No discussion of the Gulf Coast would be complete without mentioning New Orleans. If in a tragic and horrible turn of events Houston were wiped off the face of the Earth, oil production would be set back by years, during which countries like Russia would fill their coffers once again with higher oil revenue. But the U.S. would rebuild, and its oil would come back online. A hurricane won’t prevent the United States from exporting oil in the long term, and losing Houston wouldn’t jeopardize U.S hegemony, even though, it must be said, the human toll would be catastrophic.

The same could not be said of New Orleans, an irreplaceable city that is well acquainted with natural disaster. U.S. power was built on the control of the Mississippi River, and New Orleans is its most important port, making it an essential component of U.S. prosperity. The city has largely recovered from Hurricane Katrina, but it is still beset with problems. Only a few weeks ago the city’s mayor was unaware that 16 of the city’s drainage pumps were broken.

This bodes ill for a city at the mouth of America’s mightiest river. How can it keep floodwaters at bay if the pumps designed specifically for the purpose don’t work? This time it was Houston, but next time New Orleans may not be so lucky. For it more than most understands the Mississippi is fickle, as evidenced by the Great Mississippi Flood of 1927 and the Great Flood of 1993. In neither instance did New Orleans bear the brunt of the damage, but it famously did more recently during Hurricane Katrina, whose 12-year anniversary was Aug. 29.

The point is not to condemn New Orleans. Local politics and bureaucratic inefficiencies plague the U.S. as much as they do anyplace else. But since New Orleans is so important to the well-being of the United States, the natural disasters that occur there can disproportionately affect the global system, and for New Orleans, Harvey was far too close for comfort.

Storms such as Harvey introduce unknown variables into our model. We can’t predict them, but we can design our model to account for them when they happen. And why wouldn’t we? Nation states tend to act differently when they stare down the ultimate geopolitical power: nature itself.