Today marks the 75th anniversary of the end of the Battle of Midway. The books and movies about this battle have been legion. They focus on the long odds facing the Americans, the luck and breathtaking courage, and the brilliance of American codebreakers that led to victory. They assert that the American victory sealed Japan’s fate in World War II. But they rarely consider in detail the consequences if America had lost the battle, which it might easily have done. The Japanese were also extraordinarily courageous. Had they been luckier, and had they changed the Japanese code well before the battle as they should have, Midway could have ended in the destruction of three American carriers, with the Japanese navy intact. On this anniversary, I want to consider the war had the battle gone Japan’s way.

The immediate consequence of a defeat at Midway would, of course, have been in the Pacific. The Japanese plan appears to have been to follow Midway with an assault on strategic islands in the South Pacific. They would have faced light forces on the islands and no naval threat. They would have taken islands, built airfields and constructed overlapping areas of air power that would have prevented merchant shipping from entering. The flow of U.S. troops and materiel to Australia would have slowed to a trickle or dried up altogether. This would have meant that the U.S. would not have taken Guadalcanal and New Guinea until much later. It also would have given Japan much more time to consolidate a line, for example, from Samoa to Midway to the Aleutians, which was also part of Japan’s Midway strategy.

The United States, lacking a sufficient carrier force, would not have been able to launch a Pacific offensive until mid-1943, and that offensive would have had to be focused on the South Pacific rather than the Gilberts, Marianas and Marshalls. The cost in time, men and materiel of bringing Japan into range of American bombers would have been substantial. Submarines would have had to launch from Pearl Harbor rather than Midway, which is 1,300 miles (2,100 kilometers) longer, and much of the time would have been spent on submarine operations to interdict supplies instead of attacking Japanese warships. Japan would have had time and materiel to increase its strength.

The Americans’ problem in the Pacific would have been securing Hawaii as a forward base and maintaining the line of supply from the West Coast. The Japanese were unlikely to invade Hawaii, given that all operations there would take place within the range of U.S. air power. But the Japanese could have used submarines based in Midway to interdict supplies from the West Coast. If Hawaii ceased to be an effective base, then the Japanese would dominate the Western Pacific. They would have had options to strike the West Coast, and certainly to take Dutch Harbor in Alaska or even Anchorage. They already held the islands of Attu and Kiska. The Americans would have had to answer. 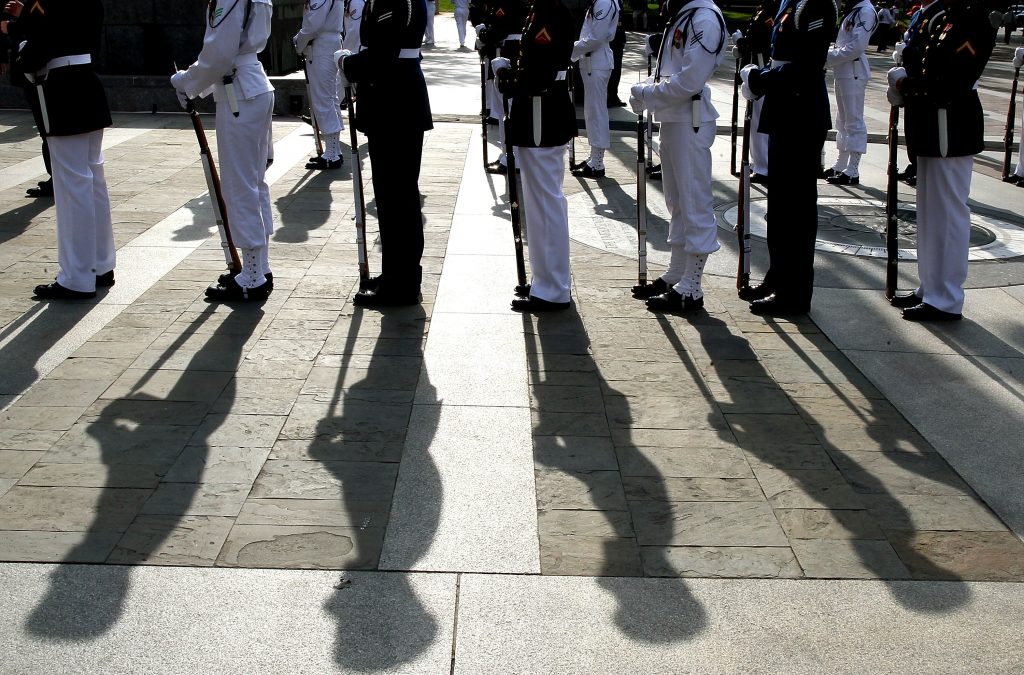 Members of the U.S. military cast shadows while participating in a ceremony and commemoration of the 70th anniversary of the Battle of Midway at the U.S. Navy Memorial on June 4, 2012 in Washington. Mark Wilson/Getty Images

In 1942, the Battle of the Atlantic was at its peak, and that summer and fall, an extraordinarily high 10 percent of all Allied shipping in the Atlantic was being sunk. It is at this point that the United States would have had to decide whether to risk the isolation of Hawaii or reduce the number of destroyers based in the Atlantic. It couldn’t do both – U.S. production of naval vessels wouldn’t really be able to surge until mid-1943.

The shipping of supplies to Britain was meant to support Britain and the Soviet Union, an excellent long-term strategy for pursuing American interests. But this was a political problem. The immediate threat to the American homeland would likely trump long-term strategy.

Given the stakes in the Pacific, the odds against U-boats in the Atlantic and the delay in increased production of naval vessels, the U.S. would have had little choice but to transfer destroyers to the Pacific. But that wouldn’t be enough. It would also greatly increase land-based aircraft on the West Coast. The aircraft production program was beginning to gain steam in 1942, but most of that at the time was being assigned to the Royal Air Force, the U.S. Air Force buildup in Britain or the Soviet Union. That would have changed.

We must consider the impact of all this on Allied powers. Australia would have depended on its own resources. The Japanese were unlikely to invade, but the Australians couldn’t be sure of that. For things to change, the U.S. would have to launch a new Navy, fight its way through the South Pacific and then launch operations northward to push the Japanese away from Australia. To that point, neither the British nor the Americans appeared very effective allies. At the very best, the U.S. was a year away from offensive operations, and opening the line of supply to Australia might not happen until 1944, if ever.

Immediately upon the U.S. defeat at Midway, Australia would have had to demand that the last Australian forces in North Africa return home while the Suez Canal was still open. The battle of El Alamein was being fought from summer 1942 until the British victory in October. A British defeat would have enabled the Germans to take the Suez Canal and likely control the Mediterranean. Australian troops had been critical to this victory, and though the Australians had withdrawn many troops after Pearl Harbor, the 7th Division remained. The 7th Division proved to be the critical force in the final, victorious phase of El Alamein. Had the Australians withdrawn the 7th in summer 1942, which they would have had Midway been an American defeat, it is altogether possible that the British still would have won at El Alamein, but it would have been substantially less likely than with the Australians there.

But the homeland would have to take precedent. The Australians wanted to be certain that Australia was not occupied by the Japanese, but they had no military way to prevent it and no reliable allies. Their national strategy was hoping the Japanese had other plans. The Japanese had no real interest in Australia except for making sure it didn’t become a base for the Americans. The Japanese also wanted Australia’s raw materials. A peace agreement was possible. Australia, isolated and with no options, would have done what was unthinkable before Midway: signed a friendship pact with Japan guaranteeing neutrality, with a mutually beneficial trade agreement included.

At about the same time of Midway, the Germans launched an offensive in the south that would evolve into the Battle of Stalingrad. The offensive surprised the Soviets, who were expecting the assault to come on Moscow. The Soviets had also underestimated Germany’s strength. At the same time, the Soviets would have seen the American defeat at the Battle of Midway and understood that it would mean a decrease in lend-lease, if not its complete disruption. The British, who also depended on lend-lease, would be in no position to replace it, and Soviet industrial production was not yet capable of providing for a powerful defense at Stalingrad by itself.

And the Soviets had a second problem. Prior to Pearl Harbor, the Soviets had feared, and the Japanese had considered, an alternative strike into Siberia. Russia’s maritime region had oil, and Japan needed oil. The Japanese attacked south toward the Dutch holdings instead, but the interest in Siberia was still there. With a victory at Midway, the Japanese could have halted operations in the Pacific and focused on building defenses on Pacific islands that would bog down the American counterattack in mid-1943 in island-to-island fighting, with a vast Japanese fleet to challenge the landing party.

But Siberia was open. Right after Pearl Harbor, the Soviets shifted to Moscow the force that had been protecting Siberia from Japan. It was this force under Gen. Georgy Zhukov that stopped the Germans. A Japanese victory at Midway would have reopened the possibility of a Japanese invasion. But the Soviets would not have been able to send Zhukov back. Until the defeat of the German southern thrust, which would happen in early 1943, everything had to go there.

The Soviet Union faced two problems. One was that it didn’t know that it could win at Stalingrad with the absence of lend-lease shipments. The other was that critical Soviet lands were at serious risk. If the Soviets couldn’t contain the Germans’ southern thrust, the best they could do was retain a rump state in the north. If they won but Japan attacked Siberia, they would still have lost the east, and the Japanese would control the Western Pacific, China and Siberia.

In 1943 and 1944, there were discussions between Germany and the Soviets on a peace agreement that never worked out. I don’t know that either side took these talks seriously. The Germans certainly wouldn’t have considered talks had Japan won at Midway, forcing the U.S. to shift its grand strategy away from the Atlantic, putting lend-lease in jeopardy and exposing the eastern Soviet Union to Japanese attack. I think without the assistance of the Americans in 1942, the Soviets would have lost the war. In our alternate history, the Americans probably would have thought the Soviets were going to lose anyway, but history proved them wrong.

It is true that in the years after Midway, American productivity would grow to be enormous, but the enemy doesn’t wait for production to rise. Adm. Isoroku Yamamoto’s intention was to destroy the U.S. naval force in the Pacific and to create an impregnable belt of islands to block American advances. That was the purpose of Midway, and had it worked, I think there would have been a different outcome in the global war. This is because the United States was the industrial foundation of the Allies, but in 1942, that production had not really gotten underway. A defeat at Midway would have forced a reallocation of industrial production and warships. This would have left key allies, Australia and the Soviet Union, in an impossible position.

The U.S. would have had towering production by 1943 or 1944. But the Soviets would not be there anymore. Nor, I suspect, would Australia. Britain would have made it so long as it won at El Alamein without Australia’s help. The problem was that massive production without Allied forces and forward bases would have left the U.S. fighting alone. And given the distances and multiple enemies, that wasn’t possible.

This all raises a serious question for me. My work is in finding the order and predictability in history. There was nothing predictable at Midway. The Japanese should have won even with the U.S. breaking their code. The numbers were so lopsided in their favor that their defeat was a freak. And that freak created the world we live in. The Japanese were as brave and as smart, their weapons as good if not better, and they had far greater numbers. They should have won, and the things I have described should have happened, and the history of the world should have been quite different.

China and the Element of Surprise

Toward a New Geopolitical Model