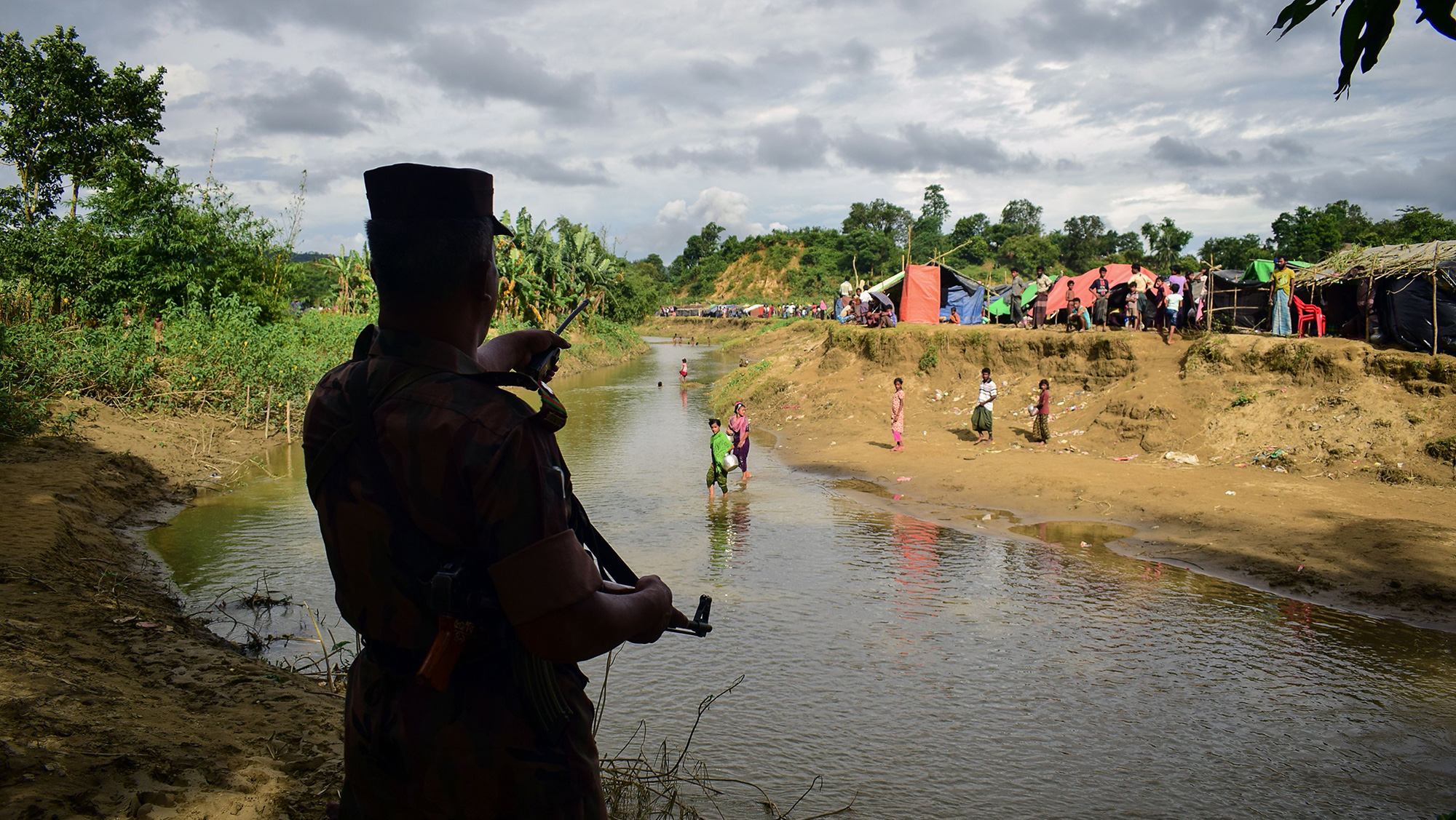 The Rohingya, the embattled, mostly Muslim minority group from southwestern Myanmar who are fleeing their homelands in unprecedented numbers, are caught in the crosshairs of regional geopolitics. The area they have long occupied is geographically isolated and historically surrounded by weak states and so has been largely ungoverned for decades. But that space is shrinking. As Myanmar emerges from decades of international isolation, the central government is attempting to exert authority over its restive reaches – no small task, considering it is also trying to manage all the political forces unleashed by its democratization. China, meanwhile, is pushing south in search of access to the Indian Ocean and influence in a crucial buffer state. Wary of the encroaching forces, Myanmar’s neighbor India is looking for a way to push back. The government in Naypyidaw will seek to play the larger powers off one another, but the Rohingya, effectively a stateless people, have little ability to do so.

On his way back from the BRICS conference in China, Indian Prime Minister Narendra Modi began a three-day trip to Myanmar on Sept. 5, his first to the country since taking office. The stated purpose of the trip is to strengthen bilateral cooperation on security, infrastructure development and trade. The unstated purpose is that Myanmar is uniquely important to India. India has an imperative to develop its hinterlands such as those that border Myanmar, riddled as they are with insurgent movements. Before it can become the power it has the potential to be, it must secure its borders and gain access to foreign export markets, particularly those in Southeast Asia.

Improving relations with Myanmar brings India closer to these objectives. Consider India’s “Act East” policy, which means to improve trade and security ties with all of Southeast Asia but is fundamentally an expression of its interest in Myanmar. The policy promises to increase economic development and trade. (Notably, some of the associated projects have been difficult to complete. The Thailand-Myanmar-India highway is unfinished in certain areas, and its completion date is unknown. Another project, the Kaladan Multi-Modal Transit Transport Project, meant to connect Myanmar and India via sea and road links, has seen delays and is slated to be finished in 2020.)

Consider also that security would improve with better relations. The border they share is porous, and the contraband that has passed through it has made its way into the hands of insurgent groups in both countries, not to mention Bangladesh. It might also help to curb the flow of human traffic. 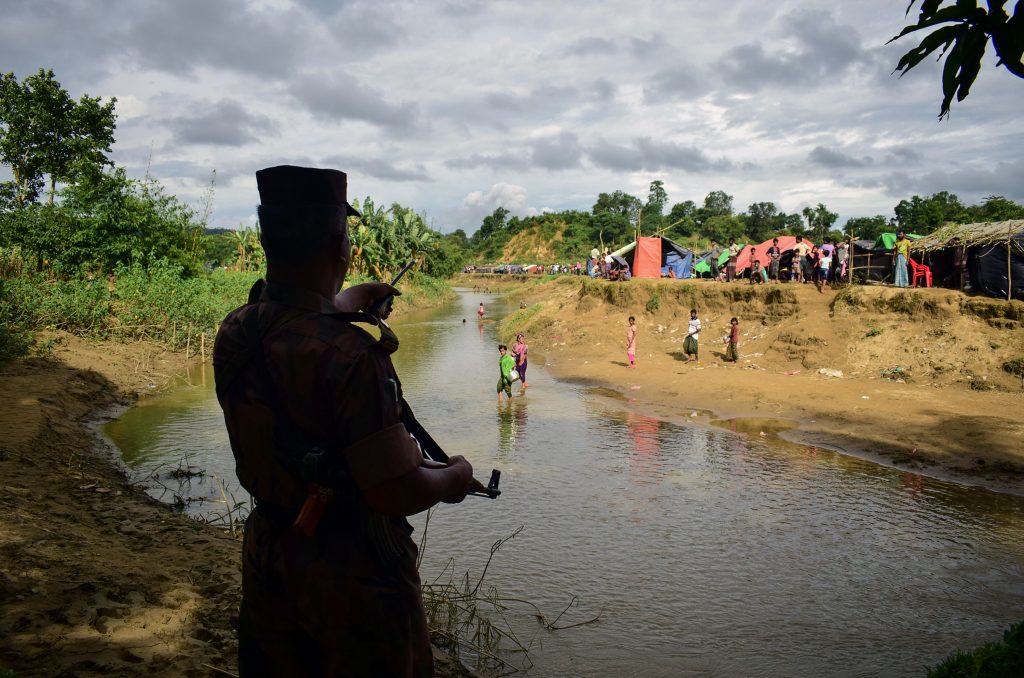 A Bangladeshi border guard near the Bangladeshi town of Ukhiya orders Rohingya refugees to return to the Myanmar side of a small canal between the two countries on Aug. 29, 2017. EMRUL KAMAL/AFP/Getty Images

Myanmar benefits from the arrangement too. The country desperately needs infrastructure development and financing, and China, ever the checkbook diplomat, is one of its only sources of aid. A partnership with India could give it leverage when it negotiates the terms of future deals with China.

China, meanwhile, is also pursuing a closer economic and security relationship with Myanmar. Doing so helps further two of Beijing’s strategic imperatives: gain access to the Indian Ocean through overland routes and improve the economic development of its non-coastal provinces. According to a 2015 Department of Defense study on the Chinese military, 82 percent of China’s crude oil and 30 percent of its natural gas imports from the sea pass through the Strait of Malacca, a narrow, easily blockaded strip of ocean in Southeast Asia. China’s industrial economy requires energy imports and manufactured goods exports to function, making alternative supply and delivery routes of the utmost importance to China. Since Beijing cannot patrol all the waters from Malaysia to Pakistan, it needs Myanmar to develop supply lines through South and Southeast Asia.

Already there are fruits of this partnership. The Chinese-financed Kyaukpyu port, which sits on the Bay of Bengal, accepts oil tankers from the Middle East and then pipes the oil to China. The pipeline is projected to supply 6 percent of China’s crude oil imports.

Myanmar also offers a way to help China develop its interior provinces, which have seen fewer rewards to China’s economic growth than their coastal counterparts. These landlocked areas have lower incomes and fewer economic opportunities and must rely on coastal ports to access global markets, lowering their potential profits.

Yunnan province, which borders Myanmar, Laos and Vietnam, is one such province. By gross domestic product, it is China’s second poorest. Greater connectivity to the Association of Southeast Asian Nations countries, with Myanmar as a point of entry, could infuse Yunnan and others like it with much-needed capital and employment. It would also enable Beijing to enrich these areas by circumventing the need to export through the coast – something China has always struggled to accomplish. Like India, though, China has had trouble completing some of the works underway. It has, for example, failed to complete the Myitsone Dam project because of complaints about flooding, environmental impacts and the greater share of produced electricity that would be sent to China.

Myanmar will take what it can get, but as a vastly inferior economic and military power, it has little choice but to play Asia’s giants off each other and exact from them the best deal possible. The humanitarian crisis with the Rohingya, those displaced peoples from Myanmar, has meanwhile captured the media’s attention, but its geopolitical importance will be measured by how it factors into the larger power struggle underway.

Taking Raqqa from the Islamic State