About 75 years ago, U.S. Marines landed on the islands of Guadalcanal, Tulagi and Florida in the British Solomon Islands. Their mission was to block the Japanese from building an airfield on the island and, after blocking them, to build their own base to fly from while the Marines drove the remaining Japanese out. The U.S. Navy would land the Marines on the island, block Japanese resupply and reinforcements from landing, and secure the American line of supply from Australia and New Caledonia.

Two months earlier, the Japanese had suffered a strategic defeat at Midway, losing a substantial portion of their fleet in the process. Japan was not without resources, but its primary thinking was now the strategic defensive. It sought to secure its gains by two means: reinforcing the layers of islands it had, and conducting regional offensives in defense of its holdings.

The American fleet wasn’t ready for major operations, nor did the U.S. Air Force yet exist in force, but the U.S. strategy had become obvious. There were two lines of attack available. First, there was a western offensive, running from Australia to New Guinea to the Philippines to Taiwan and Okinawa. Second, there was an offensive from the east: Hawaii-Gilbert Islands-Carolines-Marshalls-Marianas-Bonin-Okinawa. Put in terms of the critical and famous islands, this was an offensive through Tarawa, Saipan and Iwo Jima to Okinawa – and many other brutal but less famous islands. 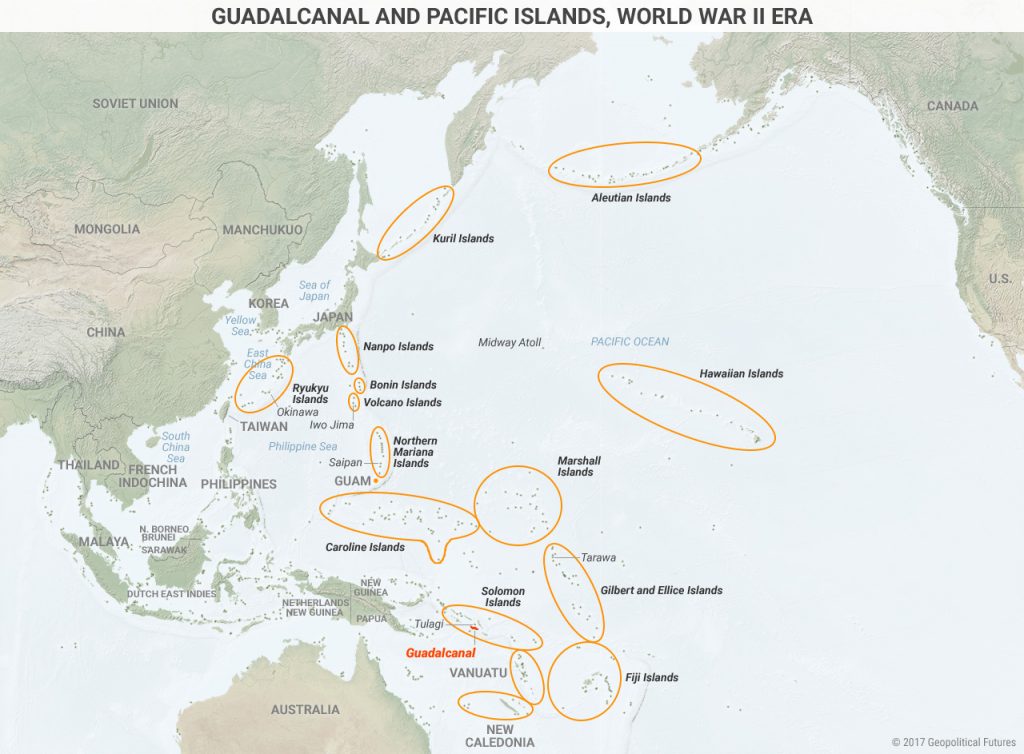 Two island groups were the key: New Caledonia and Fiji. Together, they made both offensives possible. They were directly on the line of supply to Australia and to the southern flank of any attack on the Gilberts. Adm. Isoroku Yamamoto had considered a direct assault on these islands as an alternative to Midway, but he had hoped to force the U.S. fleet into defending Midway, destroying the fleet and later taking the southern islands. He succeeded in getting Adm. Chester Nimitz to engage his fleet. He didn’t anticipate defeat.

Two months after Midway, the importance of New Caledonia and Fiji to Japan was greater than ever, but its available force had shrunk. The Japanese had to move away from large-scale carrier operations, but they had a solid alternative. On both sides, land-based aircraft based on the small Pacific islands made the movement of naval vessels dangerous. Airfields built on select islands enabled aircraft to block critical passages and make enemy offensives dangerous. American strategy later in the war was to neutralize Japan’s land-based aircraft and take the islands as bases for their own aircraft. The U.S. Navy delivered the firepower and troops who landed on an island, and in many cases the airfield was seized or created, blocking forces for hundreds of miles around. This was the island-hopping strategy the U.S., always on the offensive after Midway, adopted. It was the strategy that Japanese land-based aircraft tried to resist. The naval war undergirded an air war, the bases won by the blood of the infantry.

In August 1942, Japan was still on the offensive. It wanted to isolate Australia and then flank the assault on the Gilberts. It wanted to capture New Caledonia and Fiji. But the key to that was Vanuatu, and the only asset the Japanese had to support an offensive was an air base in the Solomon Islands. The ideal spot for an island base was Guadalcanal. If Japan couldn’t mount an invasion on New Caledonia or Fiji, aircraft from Guadalcanal could interdict supplies to Australia by threatening New Caledonia.

Australian coast watchers – plantation owners who stayed behind after the Japanese had landed in the Solomons – observed the movement of ships and noted the construction underway on Guadalcanal. They recognized that Japan was building an airfield there, and they knew that if it were completed, a strategic threat might materialize. They also realized that if they waited until the airfield was finished, an invasion would be incredibly costly, if not impossible.

The Americans weren’t ready for such an operation. The Marines available for it were unseasoned and few in number. Army support was not yet available. The U.S. Navy consisted of cruisers and destroyers and too few aircraft carriers to risk any of them. The only positive was that Japanese intelligence had underestimated the size of the available U.S. force.

Nimitz and Gen. Douglas MacArthur understood the potential significance of the Japanese move, and they understood that they were in no position to launch a counterattack. They also knew that if they waited until they were ready, an invasion would be impossible. Japanese aircraft would devastate the landing force, and no carrier would be able to get close without being sunk.

If Japan established its air base in Guadalcanal, it could launch a massive operation against U.S.-Australian supply lines, forcing the U.S. to abort the future New Guinea attack and exposing the western flank of any future U.S. offensive. Japan would then be able to concentrate on the islands of the Central Pacific, making the eastern offensive problematic for the United States.

Nimitz, in strategic command and a meticulous planner, had to shoot from the hip. He had to launch the first Allied offensive of the Pacific War.

The plan was that the Marines would land nearby on Tulagi and the island of Florida as well as on Guadalcanal. Their mission was to capture the airfield before it was activated by the Japanese. Having done that, Navy construction brigades known as Seabees would land and prepare the base for American aircraft, which would then support the Marines in holding the island and, after reinforcement, project power northward.

The Americans didn’t want to take the island, and they didn’t want to start the offensive here. It was the Japanese that forced the Americans’ hand. The Japanese forces on the island were unequal to the task, but the Marines were in even worse shape. The Marines had a huge advantage, however. Their mission was to take and hold Henderson Field, the name they gave the airfield under construction. Then they would be on the defensive. The Japanese would have to dislodge them, moving through the swamps and elephant grass that could slice a man open. Given the available forces and the tactical and strategic reality, the Marines were in a powerful position.

The Japanese understood as much. They realized that if they lost the airfield, the situation in the Solomons would reverse, New Caledonia would be secure, and any hope of isolating Australia would be lost. They had to reinforce Guadalcanal and keep sending supplies to it. The U.S. had to do the same. This was a naval problem, and the Japanese navy had the cruisers and destroyers to protect supply ships. The Americans focused on cutting off Japan’s supply route.

During the invasion, the Americans and Australians sent in cruisers and destroyers. The U.S. also sent in an aircraft carrier to provide air support for the Marines. But the commander withdrew the carrier, afraid to lose it. He was bitterly chastised by the Marines, who felt abandoned, but in my view he did what was strategically necessary. It would be almost a year before a large number of carriers were available. The U.S. could not afford to lose any, lest Yamamoto take another shot at the Central Pacific. But though he was right, the decision left only surface vessels and some submarines to maintain the U.S. lines of supply and to sever the Japanese line of supply. 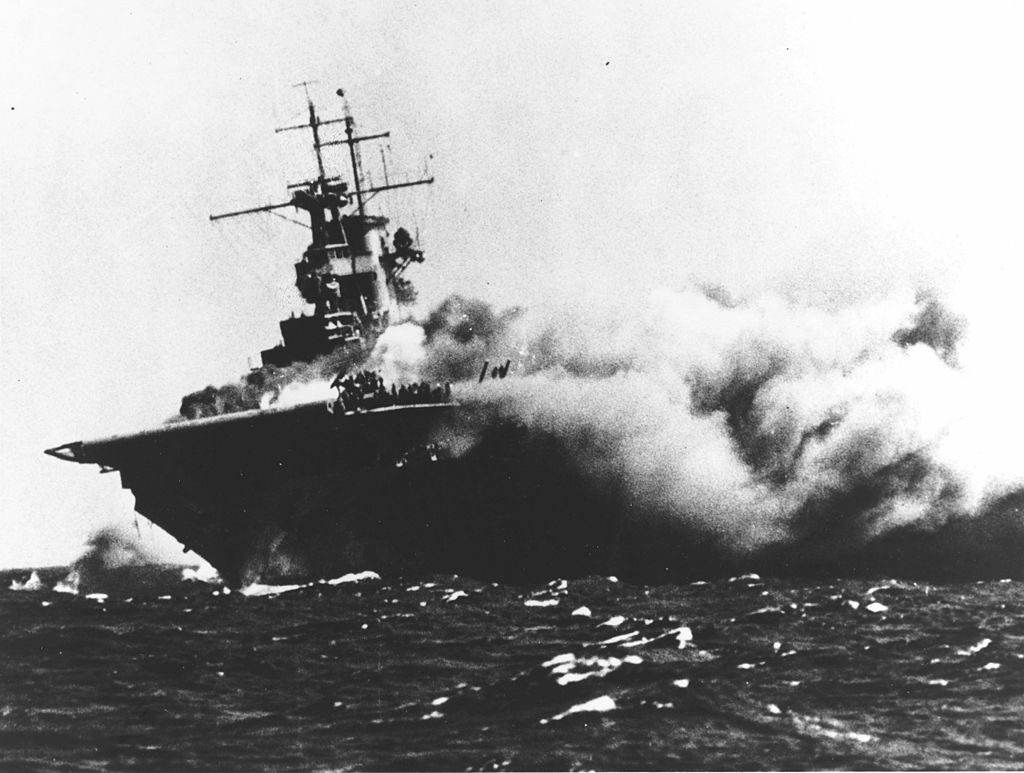 The U.S. Navy aircraft carrier USS Wasp (CV-7) burning and listing after she was torpedoed by the Japanese submarine I-19, on Sept. 15, 1942, while operating in the Southwestern Pacific in support of forces on Guadalcanal. U.S. NAVY

Most of the attention around Guadalcanal focuses on the Marines, but it was fundamentally a naval battle. This is because the Japanese had concentrated on naval technology before the war. They had a torpedo with a much greater range than American torpedoes. They also had flashless powder. When the U.S. fired, the Japanese could count the guns and the range. When the Japanese fired, the Americans couldn’t see them. The water off Guadalcanal was nicknamed Iron Bottom Sound because of the number of ships sunk.

In spite of all this, the supplies, from bullets to aviation fuel, made it in. The Marines pushed forward toward Japanese lines, with or without air support. They moved to tactical defensive positions during the night and absorbed countless Japanese attacks, slowly winning a war of attrition. The Japanese sent replacements, but the U.S. Navy and aircraft slowly choked the Japanese supply effort. Finally, the Japanese evacuated the island of surviving troops.

The Beginning of the End

This ended Japanese strategic operations, which were already sparse after Midway. The U.S. no longer had to defend the line of supply to Australia, and American troops surged to Australian bases. As important, the U.S. had its first taste of amphibious warfare on any scale. The lessons learned about the need for air superiority and massive naval support, as well as the importance of not getting bogged down in attritional warfare, were all carried forward.

This was the moment that Japan might have sought out truce terms. It’s possible they would have gotten them. Guadalcanal made clear that the Japanese, even in defeat, could exact an enormous price – and the Japanese lines of defense hadn’t been pierced yet. There would be almost three years of war yet, and in 1942 the Americans could reasonably think there would be many more. The U.S. dreaded a separate peace between Russia and Germany and eagerly wanted to create a second front in Europe and lend-lease for the Russians.

For Japan, however, it was unthinkable – culturally and conceptually – to seek a truce. The Japanese had lost a battle on a Godforsaken island. Far from the Japanese leadership’s mind was any notion that Midway had closed to door to victory or that Guadalcanal had locked it.

The war went on for two and a half years. The United States never lost the initiative. Japanese forces were scattered on small islands, and the Japanese navy could not sortie to their defense. Having turned amphibious warfare into a replicable model, the U.S. chose which island to assault and never withdrew forces after it had landed. From this point on, the Japanese were simply waiting for the end, with many on both sides waiting to die.

Midway and Guadalcanal, in retrospect, ended the Pacific War, if not the death or the fear on both sides. Those battles would give the United States control of the Pacific, a control that has been in place for the past 70 years or so. And they would lead, in the circuitous path of history, to North Korea today. Whatever fears we have in 2017, they would have been very different had the battles of so many decades ago gone differently. That is the measure of the importance of these battles.

1942 was the year the outcome of World War II was defined. Two more battles, El Alamein and Stalingrad, came later in the year but not in importance.

The Fragmentation of the European Union