On June 4-7, it will be 75 years since the Battle of Midway, the battle in which the United States won the war in the Pacific and prevented the defeat of Britain and Russia. Guadalcanal, El Alamein and Stalingrad followed, all mostly fought in the second half of 1942. Over two years of horror would remain – neither Japan nor Germany was prepared to concede the point – but the war was won by the beginning of 1943.

These were extraordinary battles in an extraordinary war. I want to devote some time this year to considering the battles on their anniversaries and, I want to try to explain how these battles were an interlocking whole – really a single, rolling, global battle that collectively decided the war. By the end of the year, my goal is to show that a single global battle, beginning at Midway and ending at Stalingrad, defined the fate of humanity.

This is not simply antiquarian interest, although surely June 1942 to February 1943 must rank with Salamis, where the Greeks stopped the Persian surge into Europe; Teutoburg, where the Germans halted the Roman advance; or Lepanto, where Christian Europe halted Muslim Ottoman expansion. These battles defined the future of a civilization; June 1942 to February 1943 defined the future of the entire world.

World War II defined the global civilization in which we now live. It ended Europe’s imperial project, opened the door to American global power, created what was called the Third World and set the stage for the emergence of the Asian mainland as a significant global player. The war also bred a distrust of nationalism, gave rise to multinational institutions and turned an interest in technology into an obsession with its redemptive powers. We live in the shadow of World War II and are now in a global revolt against the world it created.

All of this must be discussed, but to understand a war, we must understand it on its own terms, its own grammar. Many talk of wars without wanting to understand their logic, from the details of an artillery barrage to the tonnage of supplies that must flow to the battlefield. War, as all things, is a matter of detail, and the detail must be framed by both the logic of a war and its purpose. World War II had a unique logic. Many Americans long for the days when Americans were united in war. They mistake World War II as the way in which Americans once fought wars, with shared values. That was never the case. The American Revolution, the Mexican-American War, of course the Civil War, and the Spanish-American War were all fought with a vocal and angry faction opposing the war while it was underway. The dissent of Vietnam or Iraq was the norm of American warfighting, and World War II (and to a lesser extent World War I) was unique in its unity. That’s because it was a unique war.

I divide wars into two types: political wars, of which there are many, and systemic wars, of which there are only a handful. Political wars are those intended to achieve limited ends. The ends may be important but not existential. The loss of the war does not mean disaster for the nation. Most wars are like this, and many have idiosyncratic or diffuse ends. The Korean War was intended to demonstrate the will of the United States in resisting communism. The Vietnam War sought to shore up the U.S. position in Southeast Asia – a significant but not decisive goal – and to maintain the credibility of the U.S. commitment to the alliance system it depended on. Throughout the history of all powerful nations, political wars abound. They are frequently not intended to be won in a conventional sense but to signal resolve or achieve limited political goals. A defeat is manageable. Such wars appear frivolous and unnecessary to segments of the population and therefore breed dissent – which is tolerated, since the wars are not worth the price of silencing dissenters.

Systemic wars differ in two ways. First, avoiding them is usually not an option. Second, losing them can be catastrophic. They aren’t rooted in transitory political interests but in tectonic shifts in the global system. The shifts are not driven by the intent of a nation but by the inevitable rise and decline of nations, the imbalances this creates, and the inevitable rebalancing, which frequently leads to wars. These wars are rare because tectonic shifts take a long time to occur, longer to mature, and longer still to lead to changes in power that are both widespread enough and consequential enough to end in war.

The Napoleonic Wars in Europe in the 19th century were systemic, as was the Seven Years’ War in the 18th century. Mongol invasions, European imperialism and the like all were systemic events containing decisive wars. World War II was a systemic war. Some argue that it was a continuation of World War I, and in Europe this was true. But World War II was different from World War I in an important way: The Pacific war between the Japanese and Americans added a new dimension.

Yet both world wars flowed from the rise and fall of powers. In the 19th century, three new powers began to emerge: Germany, Japan and the United States. Germany destabilized Europe. Japan destabilized East Asia. The United States destabilized the world. The unification of Germany in 1871 created a power of enormous economic dynamism, but one extremely vulnerable to simultaneous military attack from Russia and France and to blockade by Britain. Japan was also an economic dynamo but, bereft of natural resources, was unable to maintain its industrial base without imports of oil and other industrial minerals. Its access to these minerals depended on the willingness of suppliers to sell and ability to deliver them through waters controlled by the British and American navies. The newly emergent economic powers were both militarily insecure. This compelled them to seek a rectification of the balance of power against older and frequently weaker powers. 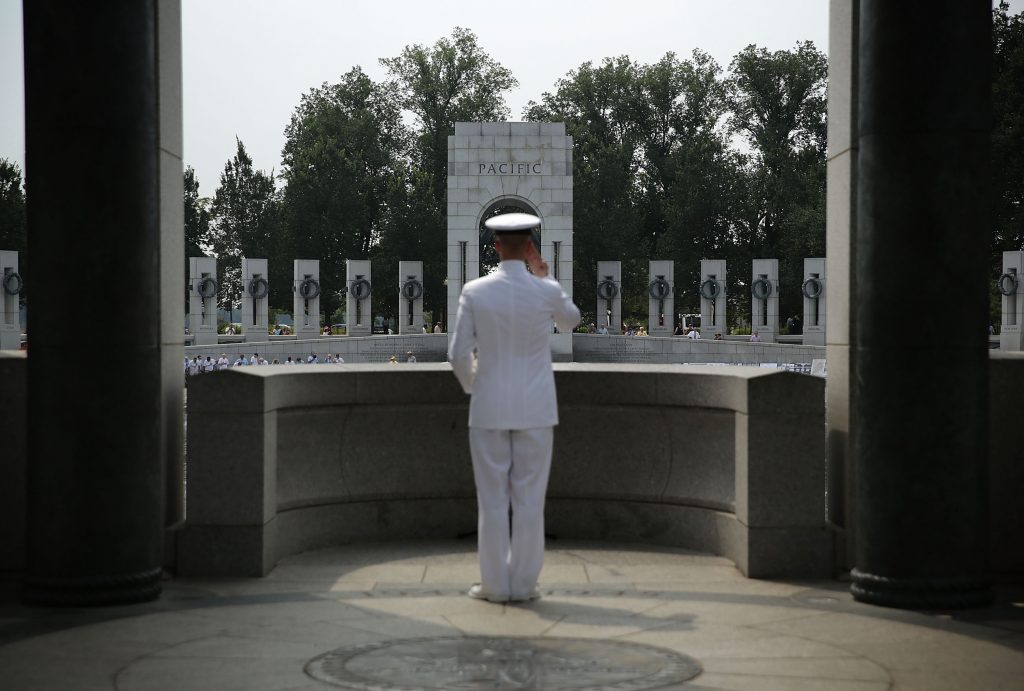 A U.S. Navy Ceremonial Band bugler salutes during an event to commemorate the 70th anniversary of the Allied forces victory in the Pacific and the end of World War II on Sept. 2, 2015, at the World War II Memorial in Washington, DC. Alex Wong/Getty Images

The rise of the United States was the most radical shift. The U.S. had become the leading economic power in the world in a startlingly short time. The United States’ only vulnerability was from the sea, and the major naval powers were the British and Japanese. The United States constructed a massive navy in response, which unsettle the Japanese in the extreme and made the British uneasy. But behind this was a fundamental reality. The European empires, and particularly the British, were built on a balance of power that was no longer in place. The existing system didn’t make room for the Germans and Japanese, but it also had no place for the Americans. The Americans did not seek formal empire, but they rejected the idea that they should be excluded from economic activities in the British and French empires. A system that marginalized the United States, Japan and Germany was unsustainable.

Systemic wars are complex. Alliances shift, and the motives of allies diverge. The Japanese fear of a U.S. blockade triggered the attack on Pearl Harbor. U.S. lend-lease to Britain was contingent on the British surrendering their naval bases in the Western Hemisphere to the United States. The British fought to preserve the empire. The U.S. was content to see it collapse. The Soviet Union was intent on fomenting uprising in Britain and the United States, but both supported Soviet military operations against the Germans. I make no attempt here to write the story of World War II but rather to point out that systemic wars involve many nations, tend to be global and are complicated. Their outcome also determines the fate of nations and, for a while, of the world.

One measure of a systemic war is the degree to which the geopolitical systems change. The first change resulting from World War II was the collapse of all European empires in the 20 years following the war’s end. The second was the rise of the United States, not only as a major economic power but also as the dominant military power. Both Japan and Germany, the nations that rose along with the United States, collapsed after the war and then re-emerged as primarily economic powers, and as such, were limited forces in the world. The defeat of Japan opened the door for a communist regime in China that was succeeded by a more complex system that allowed China to emerge as a major economic power.

The Forces of Chance and Will

Powers rise and fall, but the process doesn’t happen quickly. It’s driven by shifts deep within the structures of societies. It takes generations or even centuries – too long to be decided by individual leaders or elections.

What is decisive in the story are wars. War, particularly modern wars, are driven by necessity. Modern wars are wars of industrial production, and the size and creativity of the industrial plant shape the outcomes of wars, as does the ability to destroy the enemy’s industrial capability. At the same time, there appear to be moments in the systemic war that don’t seem tied to the underlying structure of war-making but much more to the durability of a social order, the commitment of warriors and the chances of war.

Geopolitics is, as I have argued and tried to show, predictable. If you consider the deep structure and the imperatives and constraints of the nation-states, and ignore personalities and the public opinion of the moment, you can discern the process that is underway and see where it might be going. You can predict who will be in a war and who is likely to win it. But it is in war that the eccentric forces of will and chance coalesce to create outcomes that, if not violating expectations, give it unexpected dimensions.

It was from June 1942 to February 1943 that those eccentric possibilities showed themselves. They allow us to be surprised, certainly by how the war turned out, but also by how close it came to not turning out as we might have expected. Seventy-five years after Midway, Guadalcanal, El Alamein and Stalingrad, there are few who fought in those battles who are still alive. That is a good point for us to consider during these months. We now have to gain perspective over what was, in retrospect, a little more than eight months that redefined the world.

It is one thing to see the deep structure of a thing. But in systemic wars, you must also master the battles, in the grammar of war itself. So, in contrast to history, which moves slowly from a human standpoint, battles are measured in seconds, minutes, hours and days. The long wars we speak about today are political wars. Systemic wars rip apart the world and redesign it in a matter of years, with the heart of the matter determined frequently in minutes. In two weeks, we will begin with what I regard as the single-most decisive battle of World War II for all combatant powers: Midway, where the allies could have lost but didn’t, all because of events that transpired in mere minutes.