International military efforts against the Islamic State are showing signs of progress – even if at a snail’s pace. However, the anti-IS coalition is not winning the far more significant struggle against the jihadist narrative, despite the tremendous amount of resources being deployed in building counter-narratives. The problem is not resource availability but rather political disagreements between the forces fighting IS. These disagreements are unlikely to be resolved anytime soon.

Earlier this week, I attended a conference organized by George Washington University’s Program on Extremism. The event brought together senior U.S., European and Middle Eastern officials, executives from Facebook and Google, academics and journalists to discuss the challenge of countering online radicalization and extremism. Several topics were addressed, including technological innovation, encryption and censorship. The central topic, however, was counter-messaging, which remains an Achilles’ heel for those aiming to fight jihadism. 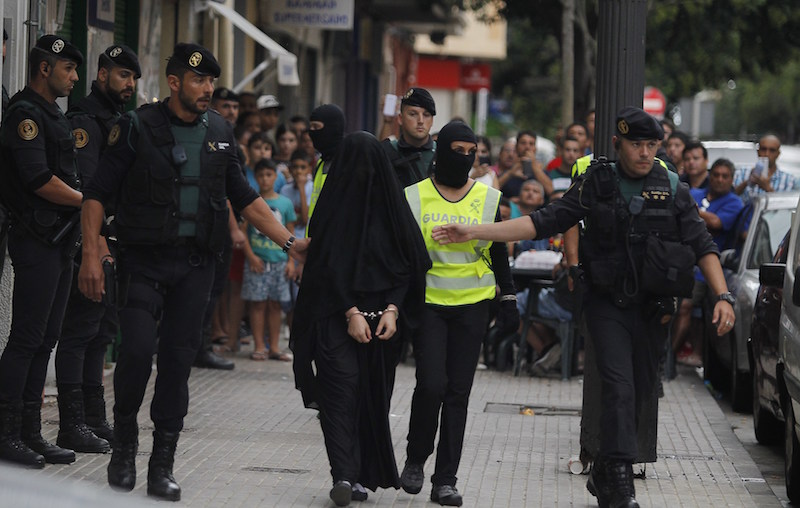 Spanish police arrest an 18-year-old Moroccan woman suspected of recruiting other women via the internet to the jihadist group Islamic State, in Gandia on Sept. 5, 2015. JOSE JORDAN/AFP/Getty Images

The concept of counter-messaging has gained more attention since the 9/11 attacks, as it is increasingly clear that military power alone is insufficient to defeat jihadism. Islamist terrorist entities are a manifestation of a much deeper problem – the proliferation of religious extremism and radicalism in Muslim-majority countries and the West. This extremism has produced different types of violent Islamist actors, who subscribe to a variety of radical views. The formation of the Islamic State out of al-Qaida is but one example.

Simply keeping up with the growing complexity of this landscape is a massive undertaking. None of this, however, compares with the Herculean task of trying to confront the ideologies that motivate jihadism to stop people from becoming radicalized and carrying out attacks. Extremism and radicalism are often recognized only when attacks take place. However, extremist ideas continue to attract and inspire people even when violent acts are not committed. Aiding the flow of these ideas and, with it, the spread of jihadism is the same technology that we use in our everyday lives.

Though designed as a means to enable the free flow of information in real time, the internet ironically sustains the engine of terrorism and insurgency. This is because Islamist radicals spend a great deal of time using it to recruit, preach, spread their message and communicate how to carry out attacks. A casual examination of jihadist videos, among other material, is enough to underscore the extent to which jihadists have exploited this technology to develop sophisticated psychological operations, as is evidenced by a BBC report that IS videos have improved in quality. While ungoverned spaces in the Middle East and elsewhere continue to act as staging grounds for jihadist activity, a great deal of radicalization actually takes place online.

Both messaging and counter-messaging consist of two parts: the means of dissemination and the content that is being disseminated. In terms of the former, the United States and its allies have the best capabilities on the planet. They can produce high-quality counter-messaging material and spread it through social media platforms. However, while they have strong technological capabilities, they have not been able to provide an inspiring counter-message, and this is why the United States is unable to compete with jihadists.

This situation is akin to having the best delivery system without the required payload. The warhead here is a narrative that can help in efforts to deconstruct the jihadist narrative. Jihadists don’t have to make their own delivery systems – they can just use technologies produced in the West. Their edge is that they have a message – an area in which their opponents remain weak.

Since the narrative is a religious one, it is only natural that the United States, a largely non-Muslim, secular republic, cannot offer a counter-narrative. This issue is even more problematic because adherents of this religion are themselves having a hard time countering the jihadist narrative. Radicals and extremists have a better command over religious texts and are more persuasive and effective in communicating their religious messages than those we call (for lack of a better term) moderates.

And this is where the problem becomes even bigger. While numerous types of radicals and extremists exist, their underlying narrative is the same. They argue that the solution to the world’s problems is the establishment of Shariah. Meanwhile, many moderates do not share the same view of what moderate Islam means. More importantly, moderates do not have a coherent counter-narrative that the masses can comfortably relate to and believe is authentic and legitimate.

The situation gets further compounded when the West gets involved in this fray. The West naturally prefers to partner with actors it can relate to. Usually, these are secular, liberal individuals and groups. But they are a commodity in short supply in Muslim communities around the world.

The West’s attempts at counter-messaging are also unsuccessful because many view these attempts with suspicion. Even religious leaders who enjoy support among the masses risk undermining their credibility if they participate in a counter-messaging exercise. By no means are we saying that there is no way to square this circle. But unless we find a way around this predicament, counter-messaging is unlikely to work, and we will run around in circles between a host of moderates and extremists. This issue is more important than ever because there are signs that IS and others will seek to further exploit these means in the future after losing territory. And right now, there is no good defense ready to meet them on this new battlefield.