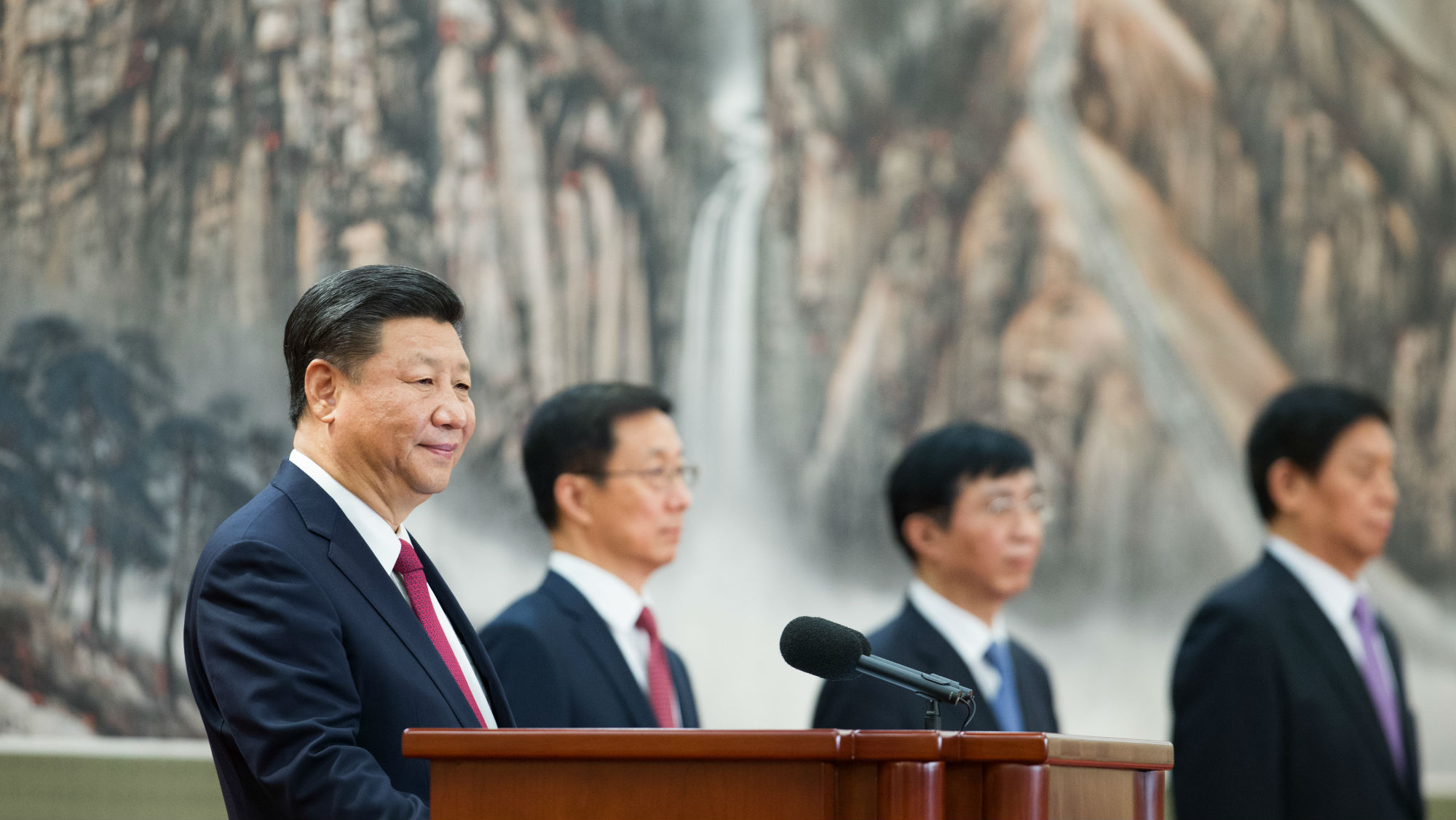 The 19th National Congress of the Communist Party of China has ended, but a new era has just begun. President Xi Jinping, who used the occasion to consolidate his control, is more powerful than ever. In fact, he is more powerful than nearly all his predecessors. His name and his ideology, a unique take on “socialism with Chinese characteristics,” have been enshrined in the party’s constitution, an honor previously bestowed only to communist China’s founding father, Mao Zedong, and its great reformer, Deng Xiaoping. He has removed political rivals and replaced them with men loyal to him. On Oct. 24, he rounded out his personnel changes by announcing members of China’s top leadership bodies: the 25-member Politburo and the seven-member Standing Committee. The upper echelons of Chinese power are now stacked heavily with Xi loyalists, tightening the president’s grip on critical levers of power. He has declined to name a successor and so has left open the possibility of an unprecedented third term in office. And he has done all this with the tacit approval of powerful allies and rivals alike.

Now that he has this power, he means to use it to enact the structural changes China desperately needs to reform its economy and take its place as a global leader – two things he believes can be done only through centralized leadership. But can one man really alter the trajectory of China’s future?

At GPF, we tend to downplay the role individuals play in geopolitics. Political currents are fickle, and even the strongest leaders are often held hostage by things they cannot control – things like geography, natural resources and demographics. But we’ve paid an inordinate amount of attention to China’s leadership transition because leadership transitions are somewhat unique there. Throughout its history, China has swung between periods of political consolidation and political fragmentation. Dynasties routinely expand only to overstretch themselves trying to control such a large and mosaic countryside before collapsing. When the central power expands, it often becomes more assertive beyond Chinese borders. When the state fragments, it subordinates international affairs to its domestic affairs. The Communist Party is just the latest such dynasty. And though China is not a superpower and is unlikely to become one, its continued rise (or subsequent fall) would necessarily disrupt the established order in such a geopolitically critical region.

What has unfolded over the past week at the party congress, then, reveals what the party intends to do to break from China’s historical patterns: dig in around Xi, who will lead them, come what may, into a new if uncertain era.

Chinese President Xi Jinping speaks at the podium during the unveiling of the Communist Party’s new Politburo Standing Committee at the Great Hall of the People on Oct. 25, 2017 in Beijing, China. Lintao Zhang/Getty Images

Xi’s first term was a period of profound transition that laid the groundwork for what was formalized in the congress this week. In the current state of play, Xi and his allies now have control over at least four fundamental sources of power in the Chinese system. The first is the Politburo and its Standing Committee, where most Chinese policy is made. Three of the committee’s seven members are now loyal to Xi. (Xi occupies the seventh spot.) Notably, none of the new appointments are younger than 60. Since party secretaries serve five-year terms, and since 68 is the semi-formal retirement age of Chinese politicians, none would be able to serve two terms as Xi’s successor following the next congress in 2022. (Xi was anointed by his predecessor, Hu Jintao, five years out. Hu was picked a full decade before he took power.) In other words, Xi has laid the groundwork for his rule to extend beyond the next five years. As for the Politburo, more than half of its 25 members are considered Xi associates. Xi had already replaced 23 of the party’s 31 provincial party secretaries – some of whom are now Politburo members – even before the congress started. With so many officials beholden to Xi, his orders are that much more likely to be executed.

The second is China’s anti-corruption body, the Central Commission for Discipline Inspection, which Xi used liberally during his first term to remove rivals, undermine independent factions, and dislodge obstacles to reform further down the hierarchy. Wang Qishan, Xi’s close ally who led this effort, has retired. In his place is another Xi protege, Zhao Leji, who will assume even more responsibility than Wang in compelling officials to comply with painful reform.

The third is the People’s Liberation Army and the security services. The military is the ultimate guarantor of the party’s power, but, like the bureaucracy, had become bloated, corrupt and resistant to the party’s directives under Xi’s predecessors. To resolve these issues, Xi purged top generals, oversaw a massive reorganization of the military’s command structure and cut hundreds of thousands of troops from the ranks, partly as a way to excise corruption and reduce the power of his commanders. Unlike his predecessor, Xi has chaired the all-important Central Military Commission since taking power in 2012. Now that the congress is over, the commission is stacked with his people.

Finally, Xi controls the party’s ideology and so has the ability to set party lines. The addition of Xi’s eponymous doctrine, along with several of his core policy initiatives, to the constitution means that to challenge Xi or object to his policies is to challenge the legitimacy of the party itself. Moreover, another Xi loyalist, an ideological theorist, has been elevated to the Standing Committee, and still another has been placed as head of the party’s top propaganda organ. This, along with tight control over the Chinese media, allows Xi to frame his initiatives as one in the same with party dogma and to stoke public pressure to support his goals.

More remarkable about the congress, though, is what didn’t happen. There’s simply no evidence to suggest Xi was ever truly threatened by a backlash to his consolidation of power. Rather, he appears to have convinced enough elites that the party’s power structures needed to be rebuilt around him.

This was no guarantee, considering the collateral damage of his power consolidation. His anti-graft campaign dismantled well-entrenched fiefdoms and disrupted lucrative patronage networks. Powerful factions that had produced most of China’s top leaders in previous administrations have been undermined or co-opted. Billionaires have been jailed or exiled.

The success of this campaign, and the associated fear Xi has instilled in those who would oppose him, partly explains why there was so little dissent this week. But that explanation only goes so far. The deeper reason is that the Chinese elites believe the challenges their country faces can be met only if the party dominates every aspect of Chinese life. And party dominance requires a dominant personality at the top.

Their belief was imparted on them by the years that gave rise to Xi. In the 1970s, in the power vacuum left by Mao’s death, Deng Xiaoping needed to remake the party such that it did not rely on the cult of a personality. He created a model that governed not by dominating China’s various factions but by fostering consensus among them. Deng’s model kept the peace, its success due in no small part to the wealth his economic reforms generated. But over time, the scramble for wealth calcified China’s factions, impeded reform efforts and paralyzed policymakers in times of crises. It intensified the economic imbalances between the coasts and the interior. And it led to widespread corruption, which undermined the party’s legitimacy with the public and its control over state institutions and the economy. Xi’s two immediate predecessors, Hu Jintao and Jiang Zemin, were both compromise choices with small power bases. Hu, in particular, struggled to assert control over institutions that were headed by officials appointed by Jiang. (This is largely why Hu does not appear to have put up much of a fight against purges targeting his acolytes.)

Xi, too, was a compromise choice, as he had few links to China’s dominant factions. But it was clear from the outset that he needed to overhaul the system that put him in power. Mao himself warned that a system based on allegiance to factions or fiefdoms, rather than the party itself, could very well destroy the party. (Xi frequently invokes this line during speeches.) This is why Xi focused his purges on disrupting the sorts of patronage networks, vested interests, and institutional fiefdoms that allow factions to proliferate and develop into independent bases of power. Their power will be replaced by the power of the party – in the military, in the bureaucracy, in education and in all economic sectors. Xi believes the party must be empowered to act decisively in a crisis, as it had been unable to before, particularly during times of slowed economic growth.

Of course, none of this may be enough. China’s problems are fundamental and unchanging. The country is trapped by contradictory forces, and trade-offs cannot be wished away, no matter how powerful Xi becomes. It cannot implement the structural reforms needed to put the Chinese economy on solid footing without assuming untenable political risks. It cannot reap the full economic benefits of liberalization without relaxing party control, but it also cannot let market excesses and foreign influence undermine party legitimacy.

Still, anxieties about whether China can ease these pressures are what fueled Xi’s rise. Xi has made the case that his power is the party’s power — that there’s no other path forward. And his counterparts have been given ample reason to agree.

In the US Trade War, Vietnam Waits With Open Arms