Chinese Premier Li Keqiang told the National People’s Congress that China’s GDP growth rate would drop from 7 percent in 2016 to 6.5 percent this year. In 2016, the country’s growth rate was the lowest it had been since 1990. The precision with which any country’s economic growth is measured is dubious, since it is challenging to measure the economic activity of hundreds of millions of people and businesses. But the reliability of China’s economic numbers has always been taken with a larger grain of salt than in most countries. We suspect the truth is that China’s economy is growing less than 6.5 percent, if at all.

The important part of Li’s announcement is that the Chinese government is signaling that it has not halted a decline in the Chinese economy, and that more economic pain is on the way. According to the BBC, Li said the Chinese economy’s ongoing transformation is promising, but it is also painful. He likened the Chinese economy to a butterfly struggling to emerge from its cocoon. Put another way, there are hard times in China that likely will become worse. 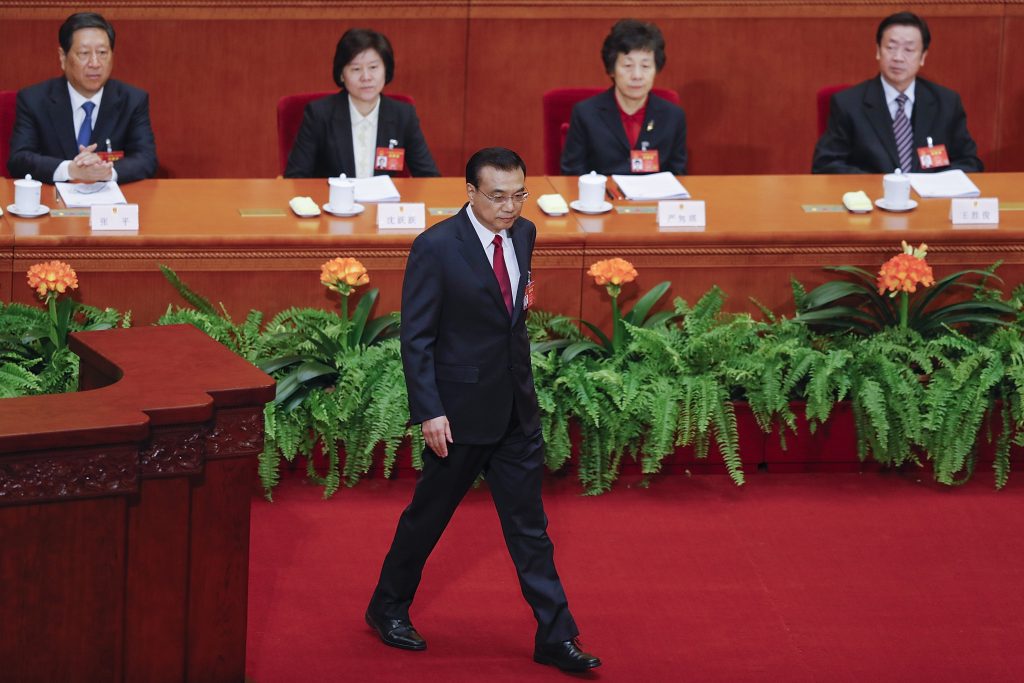 Chinese Premier Li Keqiang attends the opening session of the National People’s Congress at The Great Hall of the People on March 5, 2017 in Beijing, China. Lintao Zhang/Getty Images

China’s economic miracle, like that of Japan before it, is over. Its resurrection simply isn’t working, which shouldn’t surprise anyone. Sustained double-digit economic growth is possible when you begin with a wrecked economy. In Japan’s case, the country was recovering from World War II. China was recovering from Mao Zedong’s policies. Simply by getting back to work an economy will surge. If the damage from which the economy is recovering is great enough, that surge can last a generation.

But extrapolating growth rates by a society that is merely fixing the obvious results of national catastrophes is irrational. The more mature an economy, the more the damage has been repaired and the harder it is to sustain extraordinary growth rates. The idea that China was going to economically dominate the world was as dubious as the idea in the 1980s that Japan would. Japan, however, could have dominated if its growth rate would have continued. But since that was impossible, the fantasy evaporates – and with it, the overheated expectations of the world.

China’s dilemma, like Japan’s, is that it built much of its growth on exports. Both China and Japan were poor countries, and demand for goods was low. They jump-started their economies by taking advantage of low wages to sell products they could produce themselves to advanced economies. The result was that those engaged in exporting enjoyed increasing prosperity, but those who were farther from East China ports, where export industries clustered, did not.

China and Japan had two problems. The first was that wages rose. Skilled workers needed to produce more sophisticated products were in short supply. Government policy focusing on exports redirected capital to businesses that were marginal at best, increasing inefficiency and costs. But most importantly – and frequently forgotten by observers of export miracles – is that miracles depend on customers who are willing and able to buy. In that sense, China’s export miracle depended on the appetite of its customers, not on Chinese policy.

In 2008, China was hit by a double tsunami. First, the financial crisis plunged its customers into a recession followed by extended stagnation, and the appetite for Chinese goods contracted. Second, China’s competitive advantage was cost, and they now had lower-cost competitors.

China’s deepest fear was unemployment, and the country’s interior remained impoverished. If exports plunged and unemployment rose, the Chinese would face both a social and political threat of massive inequality. It would face an army of the unemployed on the coast. This combination is precisely what gave rise to the Communist Party in the 1920s, which the party fully understands. So, a solution was proposed that entailed massive lending to keep non-competitive businesses operating and wages paid. That resulted in even greater inefficiency and made Chinese exports even less competitive.

The Chinese surge had another result. China’s success with boosting low-cost goods in advanced economies resulted in an investment boom by Westerners in China. Investors prospered during the surge, but it was at the cost of damaging the economies of China’s customers in two ways. First, low-cost goods undermined businesses in the consuming country. Second, investment capital flowed out of the consuming countries and into China.

That inevitably had political repercussions. The combination of post-2008 stagnation and China’s urgent attempts to maintain exports by keeping its currency low and utilize irrational banking created a political backlash when China could least endure it – which is now. China has a massive industrial system linked to the appetites of the United States and Europe. It is losing competitive advantage at the same time that political systems in some of these countries are generating new barriers to Chinese exports. There is talk of increasing China’s domestic demand, but China is a vast and poor country, and iPads are expensive. It will be a long time before the Chinese economy generates enough demand to consume what its industrial system can produce.

In the meantime, the struggle against unemployment continues to generate irrational investment, and that continues to weigh down the economy. Economically, China needs a powerful recession to get rid of businesses being kept alive by loans. Politically, China can’t afford the cost of unemployment. The re-emergence of a dictatorship in China under President Xi Jinping should be understood in this context. China is trapped between an economic and political imperative. One solution is to switch to a policy that keeps the contradiction under control through the use of repression.

The U.S. is China’s greatest threat. President Donald Trump is threatening the one thing that China cannot withstand: limits on China’s economic links to the United States. In addition, China must have access to the Pacific and Indian oceans for its exports. That means controlling the South and East China seas. As we have previously written, the U.S. is aggressively resisting that control.

Faced with this same problem in the past, Japan turned into a low-growth, but stable, country. But Japan did not have a billion impoverished people to deal with, nor did it have a history of social unrest and revolution. China’s problem is no longer economic – its economic reality has been set. It now has a political problem: how to manage massive disappointment in an economy that is now simply ordinary. It also must determine how to manage international forces, particularly the United States, that are challenging China and its core interests. One move China is making is convincing the world that it remains what it was a decade ago. That strategy could work for a while, but many continue viewing China through a lens that broke long ago. But reality is reality. China no longer is the top owner of U.S. government debt, an honor that goes to Japan. China’s rainy day fund is being used up, and that reveals its deepest truth: When countries have money they must keep safe, they bank in the U.S.

China carried out a great – and impressive – surge. But now it is just another country struggling to figure out what its economy needs and what its politics permit.

The Geopolitics of the Belarusian Election