Hong Kong’s nascent pro-independence movement has recently made headlines and increased its political profile. Now, Beijing and its local allies are suppressing some of the first elected representatives of this movement. This shows both Beijing’s strengthening political influence over the territory, and its perennial fears of open challenges to its legitimacy. Most people in Hong Kong are in favor of maintaining the status quo, but even the smallest defiance of China’s territorial integrity is treated as an existential threat by the Chinese leadership. 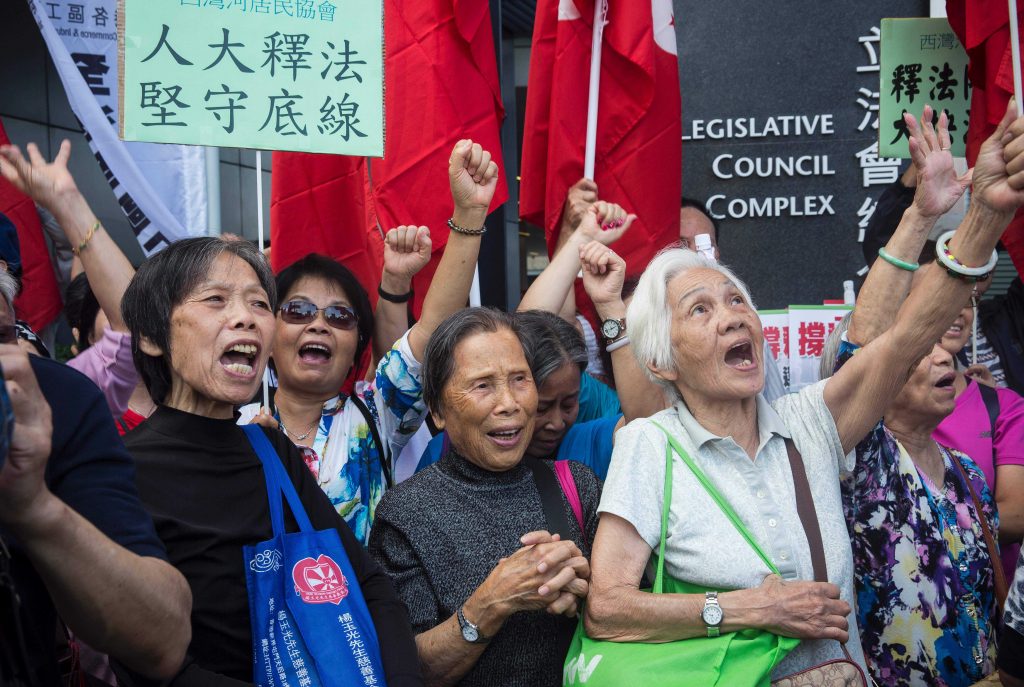 At their swearing-in ceremony in October, the two Youngspiration members displayed banners reading, “Hong Kong is not China.” While reciting a mandatory oath, Leung replaced the words “Hong Kong special administrative region of the People’s Republic of China” with “Hong Kong nation.” Yau went a step further, inserting expletives and the derogatory word “Che-na” in her oath. The Japanese used the term “Che-na” as a pejorative for China before and during the Second Sino-Japanese War.

The reaction from Hong Kong’s pro-Beijing camp has been swift and decisive. Pro-Beijing Legislative Council Secretary-General Kenneth Chen declared their oaths to be invalid under Hong Kong’s governing Basic Law and took the unprecedented step of barring their entrance into the body. Patriotic factions organized street protests outside the council, denouncing Leung and Yau as traitors and equating them with Japanese war criminals.

After a few weeks of political and legal maneuvering, the central government in Beijing intervened in the standoff. On Nov. 7, the Standing Committee, a powerful grouping of 150 lawmakers within China’s National People’s Congress, interpreted Hong Kong’s Basic Law. According to their unanimous interpretation, Hong Kong Legislative Council members must take their oath clearly and sincerely, and they can be legally disqualified from taking office if they fail to meet these requirements. This gives the Hong Kong government the right to decide on the sincerity of mandatory oaths made by elected lawmakers.

On Tuesday, Hong Kong’s High Court ruled that the Youngspiration members should lose their seats. Justice Thomas Au Hing-cheung said his ruling would have been the same regardless of the interpretation by China’s Standing Committee. Regardless of this claim, Beijing and its local allies have created an effective legal barrier between organized forces championing Hong Kong independence and the territory’s political system.

Pro-Beijing, pro-status quo political parties dominate the Hong Kong government. Currently, these parties have 40 seats in Hong Kong’s 70-member council. Meanwhile, pro-democracy parties have 23 lawmakers in the council. These parties want increased representative democracy, and they are wary of Beijing’s increasing influence. However, leaders of the established pro-democracy outfits have somewhat distanced themselves from Youngspiration’s radical protests, while supporting their right to serve as legislators. After the effective banning of Yau and Leung, pro-independence localist factions now have only four seats in the council.

The localist movement’s origins stem from the inherent tensions in the “one country, two systems” regime that governs Hong Kong (and nearby Macau). After 156 years of British rule, which ended in 1997, Hong Kong was a very wealthy financial center with a reputation for clean governance, personal liberty and rule of law. However, it never had meaningful democracy. From the late period of British rule onward, slow and incremental reforms were adopted to increase the scope and power of representative elections.

Beijing promised to incorporate Hong Kong into a “one country, two systems” paradigm in which the Chinese government would oversee Hong Kong’s military and foreign affairs while leaving the existing local order and legal system intact until 2047. However, China’s National People’s Congress has the legal right to interpret Hong Kong’s Basic Law. This authority gives Beijing huge political sway over contentious political issues in Hong Kong, and is a major cause of fear for the political parties opposed to Beijing’s influence. 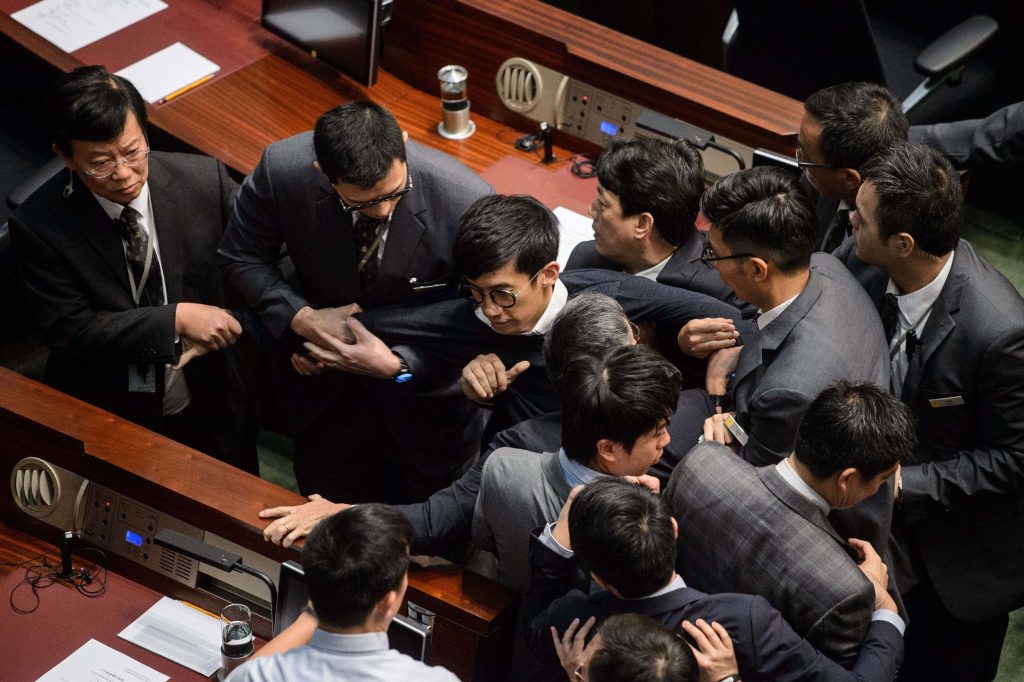 The gap between the generally young independence advocates and Hong Kong’s ruling parties has arisen from economic, generational and political factors. Hong Kong residents were in the prime position in the 1980s, 1990s, and the first decade of this century to profit from the mainland’s new economic outlook and low-cost labor. However, many youth now suffer from extremely high housing prices, increased cost of living, greater competition for jobs and other negative effects of the mainland’s enormous economic influence.

It is important not to overstate this issue. It is very unlikely forces advocating Hong Kong independence will gain much political power in the near future; those pushing for the cause represent a minority of Hong Kong residents. Demographics are also not in their favor, as Hong Kong has one of the lowest fertility rates in the world and a huge population of relatively conservative elderly residents. Those who benefit from close ties with the mainland are generally much wealthier and more influential than the pro-independence minority. The political forces opposed to Beijing’s increasing political sway within the territory are by no means united.

Because of the historical and contemporary nature of the Chinese state, Beijing is particularly sensitive to even marginal political, cultural and ideological threats to its internal unity. Chinese leadership perceives these threats in Xinjiang, Tibet, Hong Kong, and even in territories China does not actually control. In early November, Chinese President Xi Jinping warned that the “Communist Party would be overthrown” if it did not adequately react to any potential formal declaration of Taiwanese independence. The possibility of Hong Kong breaking away from Beijing’s rule is very small, but the Chinese state cannot ignore any organized opposition.

China is intent on maintaining its territorial integrity and will use all necessary means at its disposal to suppress and extinguish separatist movements. In Hong Kong, the Chinese government can appeal to Chinese nationalism and rely on the political system to counter the territory’s independence movement. Pro-Beijing forces have used the words and deeds of localist politicians and protesters to paint their political movement as unpatriotic sedition. Since the beginning of this recent drama, pro-Chinese protests have been significantly larger than pro-independence demonstrations, although many observers accuse pro-Beijing forces of paying elderly residents to participate in patriotic protests.

Beijing’s approach carries inherent risks. Localist political forces believe that Beijing has not interpreted Hong Kong’s Basic Law, but rather amended it. Many political moderates in Hong Kong are not in favor of independence, but they are troubled by Beijing’s increasingly proactive political machinations within the territory. Meanwhile, cutting off pro-independence groups from legal political representation could push them to take extralegal action to challenge the reigning system. While only the two Youngspiration candidates appear to be blocked at the moment, the pro-Beijing Hong Kong government now claims the right to decide on the sincerity of oaths taken by any lawmaker.

Open pro-independence politics in Hong Kong put Beijing in a difficult situation. Because of the “one country, two systems” dynamic, it would be politically awkward and likely counterproductive for Beijing to simply quash Hong Kong’s pro-independence parties with brute force. At the same time, the Chinese state cannot afford to appear weak, especially as the paradigm of political and social stability guaranteed by rapid economic growth is challenged by serious economic headwinds. China has always faced tensions between the center and the periphery, and it has always confronted the challenge of uniting an expansive, culturally diverse empire with divergent local economic imperatives. Even marginal political movements that openly challenge the legitimacy of the state and its territorial integrity represent potential existential threats.