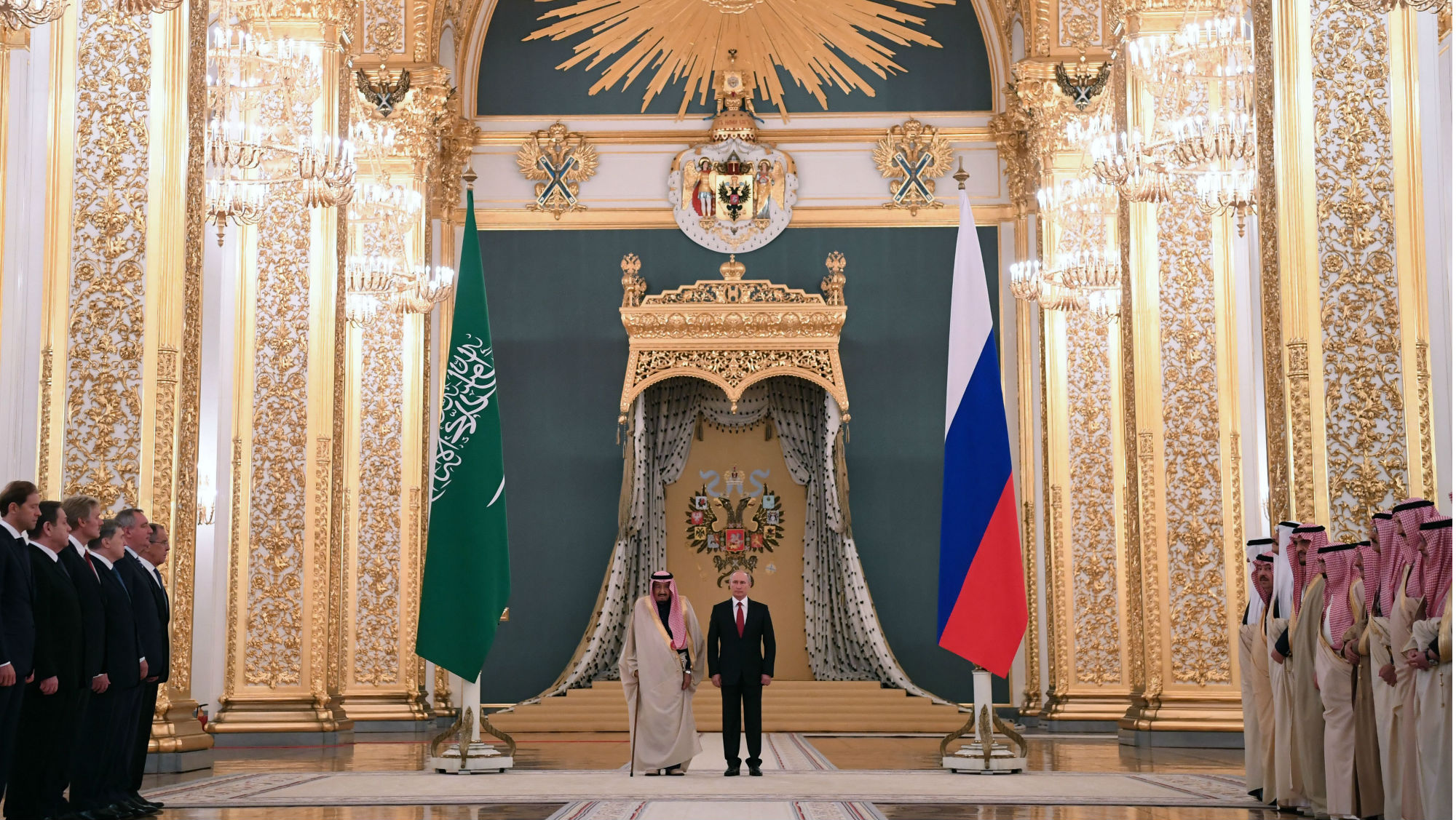 In what was the first ever visit by a Saudi monarch to Russia, King Salman bin Abdulaziz met with Russian President Vladimir Putin in Moscow on Oct. 5. As a result of deals signed during the meeting, the Saudis will pump billions of dollars of investment into Russia, and Russia will send military hardware, including the S-400 anti-aircraft missile system, to Saudi Arabia. This is a significant development for a country that usually gets its weaponry from the United States. Meanwhile, U.S. Chairman of the Joint Chiefs of Staff Gen. Joseph Dunford alleged that Pakistan’s premier intelligence service, the Inter-Services Intelligence agency, has ties to terrorist organizations. In addition, U.S. Defense Secretary James Mattis said Washington will give Pakistan one more chance to help settle Afghanistan before it turns to tougher options.

The U.S. has been an ally of Pakistan and Saudi Arabia almost since their respective foundings. They rose as the slow death of colonialism gave way to new nations, and they were looking for the support of great powers. Having risen to prominence after World War II, the United States confronted a new enemy, the Soviet Union, during the Cold War. It needed allies across the globe to help it contain the spread of Soviet influence. It found two such allies in Islamabad and Riyadh.

But the Cold War is over, and the logic that brought these countries together no longer exists. Saudi Arabia and Pakistan are drifting away from the U.S., albeit slowly, and as they search for new partners, the Americans will find it increasingly difficult to manage the Middle East and South Asia.

Saudi Arabia was founded in the years between World War I and World War II. At the time, the British were the leading power in the Middle East. It would be more than a decade until the United States became the hegemon we know today, and it would be five years until oil was discovered under Saudi sands. Its future uncertain, the young Saudi state needed as much political support as it could get – it especially needed international recognition.

At the same time, the Soviets were expanding their influence around the world. They seized the opportunity to be the first to recognize the new kingdom – doing so was part of their efforts to find allies among the newly emerging states of the Middle East. But soon after came World War II. When the dust settled, the United States had replaced Britain as the predominant power in the Middle East. Seven months before the war ended, Saudi King Abdulaziz and U.S. President Franklin D. Roosevelt met aboard the USS Quincy in the Suez Canal and forged a strategic partnership between their countries. With the Cold War looming, this marked the end of Soviet cooperation with Saudi Arabia.

But it marked the beginning of a long alliance between the Americans and the Saudis against the Soviets, who had found other Arab allies among the left-wing republican regimes in Egypt, Syria, Iraq, Libya and Algeria. During the 1980s, with Washington’s encouragement, Saudi Arabia increased its oil output, driving down prices to weaken the Soviet Union, whose economy relied on energy exports. But perhaps the most important joint venture was the 1979-89 war in Afghanistan, in which the U.S., Saudi Arabia and Pakistan teamed up to counter the Soviet military intervention in the southwest Asian nation.

A couple of years after its troops were forced to withdraw from Afghanistan, the Soviet Union imploded. The Saudis and Americans continued to work together, especially during the 1991 Gulf War, but without the Soviet threat, the basis for their alliance weakened. The 9/11 attacks later dealt a serious blow to the U.S.-Saudi relationship, which was further strained when the U.S. partnered with pro-Iranian Shiites in Iraq to topple Saddam Hussain.

Saudi Arabia is still a world leader in oil production, but it’s oil no longer gives it the leverage over the United States it once did. The shale revolution in the U.S. has enabled the U.S. to become a major producer – and exporter – of crude. Higher U.S. production, moreover, has driven prices so low that the Saudis can no longer generate enough profits from the sale of oil to balance their budget. 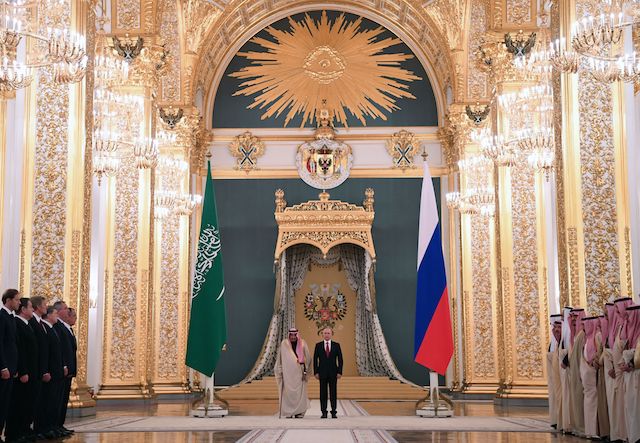 Russian President Vladimir Putin (R) and Saudi King Salman bin Abdulaziz attend a welcoming ceremony ahead of their talks at the Kremlin in Moscow on Oct. 5, 2017. YURI KADOBNOV/AFP/Getty Images

Washington and Riyadh continue to do business with one another; in fact, U.S. President Donald Trump was just in Saudi Arabia in May signing an arms deal. But the U.S. no longer depends on Saudi oil, and it doesn’t feel that it can count on the kingdom in its fight against jihadists, whose ideology overlaps with that of the kingdom. The U.S. has instead moved closer to Turkey and has reached an accommodation with Iran. Recognizing that the Americans were drifting away, the Saudis began to craft a new national security doctrine. Since 2011, they have taken the lead in addressing several regional security issues rather than waiting for the U.S. to do it for them. Reaching out to Russia is another part of this new security doctrine.

Pakistan, for its part, gained statehood in 1947, and by the mid-1950s it was part of the U.S. containment line against the Soviets. Pakistan’s neighbor and arch rival, India, eventually allied with Moscow. The Pakistani political elite was anti-communist and British-trained, so the United States was the natural choice of ally.

The high point of the U.S.-Pakistan relationship was during the Soviet war in Afghanistan. Pakistan’s military and intelligence establishment worked closely with the U.S. in backing the Islamist rebels who compelled the Soviet Union to withdraw its forces. The end of the war and the collapse of the Soviet Union abruptly ended the U.S.-Pakistan partnership. In fact, in the 1990s the United States imposed sanctions against Islamabad over its pursuit of nuclear weapons.

The events of 9/11, however, brought the Americans back to Afghanistan, and Pakistan was once again an important ally. But the renewed relationship was troubled from the beginning. To destroy al-Qaida, the U.S. needed to topple the Taliban regime in Afghanistan. But the Afghan jihadists were Pakistani allies. From Islamabad’s point of view, it couldn’t refuse Washington, but it also couldn’t abandon the Taliban and risk undermining its own security. Pakistan can’t get the Taliban to negotiate with the U.S., and it’s unwilling to deny the Afghan jihadists sanctuary on its soil. To make matters worse, many senior al-Qaida leaders have hidden in Pakistan, including, of course, Osama bin Laden. In the end, the United States finds itself caught in the longest war in its history, seemingly with no way out. Tensions have escalated to a point that the U.S. is now openly declaring Pakistan a hostile actor.

The conundrum for the United States is that while its relations with both Saudi Arabia and Pakistan have deteriorated, Washington still needs to work with both sides. It needs the Saudis to make sure Iran doesn’t grow too powerful in the Middle East. And it can’t afford to put too much pressure on Pakistan or the government in Islamabad could buckle, allowing the chaos in Afghanistan to spill over the border. The U.S. war on jihadists has taken a toll on both relationships. Washington forced both governments into difficult situations at home and has engaged with actors that both countries see as their enemies: Iran in the Saudis’ case, and India in Pakistan’s. Both the Saudis and the Pakistanis will thus be exploring other options. Pakistan is already trying to get tighter with China, while the Saudis are reaching out to the Russians. U.S. efforts to manage these regions just got that much more complicated.