Poland’s history can easily be summed up as a continuous struggle against invasions and divisions. The country’s geopolitical significance stems from its location between Russia and Germany. We have written about the challenges that both Russia and Germany will face in 2017; these challenges also pose unique problems for Poland, which is economically and militarily vulnerable. Recent developments have also helped Poland lay the groundwork for its eventual emergence as a regional power, as stated in our 2040 forecast.

Like Germany, Poland has relied on exports to fuel economic growth while using European Union funds to build infrastructure and attract foreign investment. While exports accounted for 47.4 percent of Poland’s GDP in 2015, foreign direct investment accounted for only 2.95 percent of its GDP that year. This figure peaked at only 6 percent in 2006, according to the World Bank. The country’s main partner for trade and investment is Germany. That means Polish production is part of the German supply chain. With global demand for German exports decreasing, demand for Polish products is also decreasing. Poland has looked for other markets, trying to diversify away from Germany and Europe and increase trade with the United States. In 2015, the percentage of Poland’s exports to the U.S. increased more than any other country. American consumption of Polish goods has grown by 20.9 percent since 2011. However, overall export growth has slowed during the last two years. 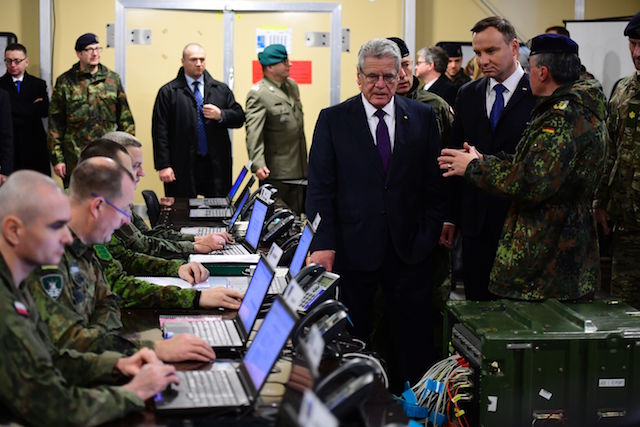 German President Joachim Gauck (C) and his Polish counterpart Andrzej Duda (Center R) listen to explanations inside the “Main Command Post” operated by both countries’ soldiers during a visit of the multinational NATO Corps in Szczecin on Nov. 28, 2016. TOBIAS SCHWARZ/AFP/Getty Images

Considering Poland’s relatively small economy, which gives it more room to maneuver, the decline in German exports could become an opportunity for Poland to maintain and increase its export competitiveness. Technology transfers have accompanied Western investment in the country, and with continued support for national research and innovation and its relatively well educated and cheap workforce, Poland could remain competitive on the global market. One major challenge Poland faces in the medium to long term is its demographic situation, which limits its potential because the country has the second fastest aging population in Europe. But the success of socio-economic policies that drive competitiveness is dependent on political stability.

Since taking office in October 2015, the Law and Justice (PiS) party has promised to lower the retirement age and has announced taxes on sectors dominated by foreign companies to provide incentives for local businesses. The governing party is part of a mainstream populist and nationalist movement in Europe, and while its popularity is high in the countryside, it has been challenged by opposition protests in major urban areas. When it tried to introduce an anti-abortion bill, claiming it would improve the country’s demographics, mass protests made the government withdraw it. Plans to reform media laws have prompted a new wave of protests, as the opposition accuses the government of restricting press freedoms. Since coming to power, the party has attempted to replace personnel appointed by the previous government to consolidate its control over the administration. In December 2015, a European Commission probe was launched into the rule of law in Poland after the government decided to replace judges on the constitutional court.

The government has also made massive staffing changes in the military. Nearly all of the inspectorate heads, chiefs of directorates at the General Staff and commanders of important units were replaced in 2016. Top leaders appointed by the previous government often have chosen resignation over firing, as the current political leadership of the Ministry of Defense consolidates power. Poland has been criticized for this, but every political party has done the same when taking office, especially when backed by high approval ratings, which PiS still enjoys. 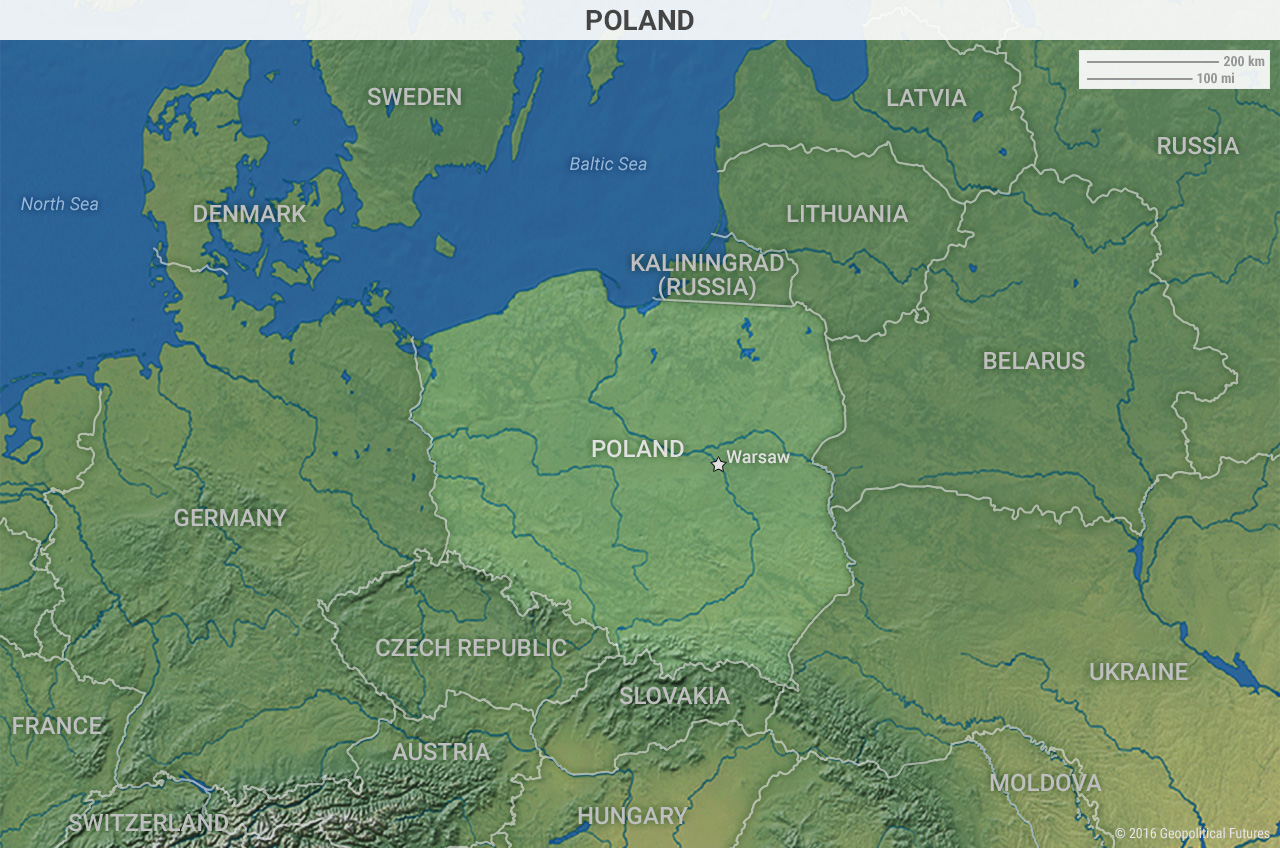 The current government has also been more outspoken in criticizing Western Europe’s approach to Russia and has been vocal in opposing Germany’s refugee quota policy from the beginning. Poland sees troubling developments in its vicinity – its flat plains mean the country is caught between Germany and Russia. As a result, Poland has seen invasions from both the east and the west. After the Cold War, Poland believed the best way to protect itself was to join multilateral organizations such as the EU and NATO. But it sees the EU becoming fragmented, with the eurozone and the German economy weakening, and growing challenges to NATO. Western Europe simply no longer shares similar strategic priorities with Poland. France’s and Germany’s foreign affairs focus is different than Poland’s – for French and German leaders, the top security concern is the refugee crisis, and Russia is secondary. To its east, Poland sees Moscow as willing to apply political pressure to preserve its traditional sphere of influence in Eastern Europe, and as the Russian economy weakens, Moscow may become more aggressive. Warsaw is likely worried by the U.S.’ significantly declining involvement in Central European affairs. It knows that the U.S. expects European countries to be more involved in NATO and take responsibility for their security needs.

Poland is aware that it needs to invest in its own defense capabilities. It has been pushing to shift NATO away from crisis management and back towards an emphasis on a deterrent posture. Since 2013, Poland has increased defense spending, which reached 2.2 percent of GDP in 2015, according to the World Bank. For the past three years, Poland has had a new chain of command that streamlined the command structure and increased its ability to undertake joint operations actions. The establishment of militia associations is another development. As the conflict in Ukraine escalated, Poland’s military began cooperating with civilian militia groups. Activities included organizing paramilitary exercises and offering courses on tactics and marksmanship. So far, these groups have been largely disregarded in national defense plans, but they are starting to be considered as a potential arm of Poland’s territorial defense capability. However, all these indicators mark only the beginning of Poland’s growing defense focus, while the country’s capabilities have not yet meaningfully increased.

This is why Poland’s priority is ensuring its strategic partnership with the U.S. is functional. During the last NATO summit, leaders agreed to establish the headquarters of a new U.S. armored brigade in Poland. Poland also is increasingly developing into a regional leader, seeking to form alliances in Eastern Europe with countries that hold similar views on security risks. It has used the Visegrad Group to support specific economic policies within the EU and oppose the German refugee quota policy. It has also become more engaged with Romania. The two countries have developed a bilateral strategic partnership and have used it as a platform to get Eastern European countries under the so-called Bucharest Format, to establish common goals and priorities for negotiations with Western partners in NATO.

With Western Europe disinclined to prioritize any potential Russian threats, Poland is slowly acting as a small regional leader by working with countries to establish and support common initiatives such as defense against Russia. Within the EU, Poland will continue to be the leading voice of Eastern Europe, distancing itself from the EU’s Western European members. Warsaw has been the main challenger of the Nord Stream 2 pipeline project proposed by Russia, effectively blocking it when the country’s anti-monopoly agency stopped the formation of the project’s consortium. Seeing that Belarus wanted to improve relations with the EU to access European markets, and considering Belarus’ dependence on Russia’s slowing economy, Warsaw has worked to improve ties with Minsk. Polish Deputy Prime Minister Mateusz Morawiecki met with Belarusian President Alexander Lukashenko in October and said a new chapter in Polish-Belarusian relations had been opened. The two countries have economic incentives to develop closer ties, and Poland will likely take advantage.

Trapped between Russia and Germany, Poland is aware of Russia’s increasing assertiveness and NATO’s challenges, including its members’ differing security interests. In the short term, Poland will likely feel the impact of Germany’s economic slowdown. Adaptation to the new reality of a declining Western Europe will not be easy or fast. The current administration will continue to seek the right balance between extending control over the economy and political institutions, and making sure its public approval ratings remain high. Considering the country’s defense imperatives, Warsaw will keep building strong ties with the U.S. and develop its regional leadership posture by working with Eastern Europeans on different levels.

Poland usually only makes mainstream news in the West when it has conflict with the EU over specific policies or when massive government protests erupt. The much more subtle and important thing to be aware of is how Poland is beginning to behave like a small regional leader. Warsaw will see increased tensions with Western Europe, and Germany in particular, partly due to economic problems, but mostly because of diverging views on security priorities. Increased Russian assertiveness will force Poland to invest in and make the most of regional alliances.

A Note on More Personal Considerations

In the Balkans, the Power of a Name