Coups may be going out of style, but purges are in vogue. Some of the world’s most powerful countries are in the midst of purges that reach deep into their political, military and security structures. Chinese President Xi Jinping calls it an anti-corruption campaign, and it has targeted everything from regional governments to vice chairman of the Central Military Commission. In Russia, President Vladimir Putin has reorganized his various security and intelligence services, is cracking down on corruption and cleaning house in some parts of the military. In Turkey, whether you want to call it a counter-coup or President Recep Tayyip Erdoğan taking advantage of the situation to eliminate what he refers to as the “parallel state,” the crackdown is wide ranging. In the U.S., we simply call it “elections.” 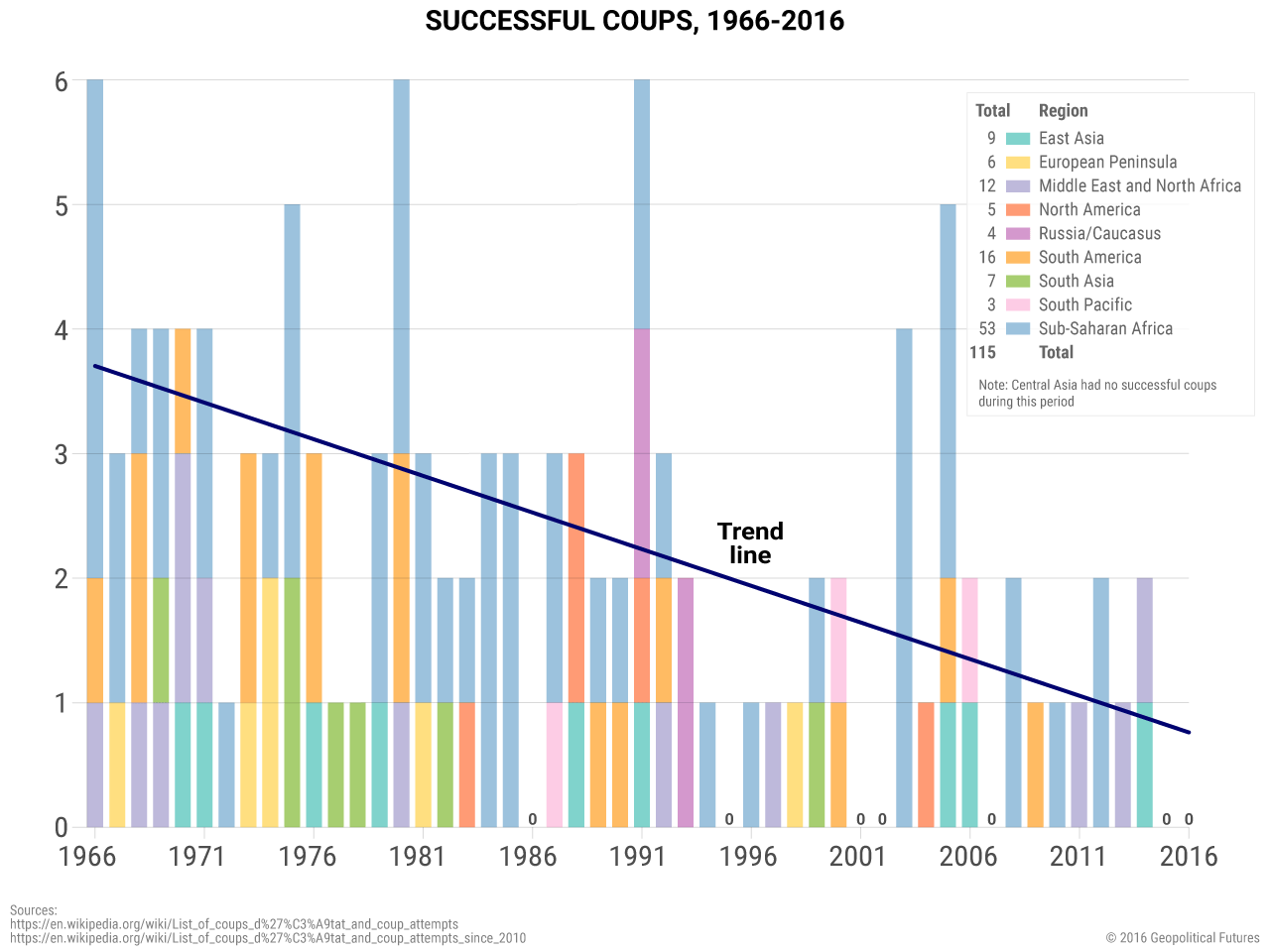 A purge can be a sign of strength, a sign of weakness or both. Some purges help to clear the road toward consolidating power. Other purges can so cripple a country’s institutional powers that the short-term benefits give way to disorder and chaos.

Xi’s purges in China began when he rose to the presidency in 2012. One of the slogans of the campaign is “tigers and flies” – it means to target senior officials (the tigers) and minor players (the flies) with the same level of urgency. The campaign has delved deep into the Communist Party and put various organizations like the Communist Youth League in its crosshairs. In the past year, the purges extended to the military, with a special commission set up early in 2016 to carry out investigations just within the military. Last week, a major general involved in planning an important military parade in 2015 came under investigation, and Guo Boxiong, a former vice chairman of the powerful Central Military Commission, was given a life sentence for violating the Communist Party’s “political discipline.”

China is no stranger to purges. In the 20th century, these purges have had profound effects on the way China has developed. In 1942, in the midst of war with Japan and conflict with the Chinese nationalists, the Rectification Campaign began in Yan’an. The Anti-Rightist Movement from 1957 to 1959 penalized hundreds of thousands among China’s most educated citizens for running afoul of Mao Zedong and the party. The Great Proletarian Cultural Revolution is perhaps the most famous purge. It began in 1966 and among the targets were Liu Shaoqi, Deng Xiaoping (who came to power after Mao) and eventually Lin Biao, the presumed successor to Mao until his mysterious death.

Xi is not Mao. But China is still China. Xi is striking a delicate balance. He is trying to make sure that the Communist Party is loyal to him and that the People’s Liberation Army (PLA) is loyal to the Communist Party. But he cannot purge with the same breadth and depth as Mao because he needs the institutions of the Chinese government to work. Xi’s supply-side reforms, his desire to remake the PLA into a modern fighting force, even basic issues like making sure the Chinese stock markets run with some level of consistency all require a functioning government and army. So far there has been little observable resistance to Xi’s moves and the Communist Party is not in a state of paralysis. But paralysis is at stake for Xi. He purges because he must. That makes him strong in one sense and profoundly weak in another.

Putin is in a similar situation in Russia. After Russia’s intelligence failure in Ukraine, Putin announced publicly in November 2014 that Russia’s most important security service, the FSB, would be “restructured” – a common euphemism for the type of purges we are talking about. Once the FSB was reorganized to his liking, Putin didn’t hesitate to put it to good use. Earlier this year, Putin embarked on something of an anti-corruption crusade of his own, and thus far the FSB has arrested mayors, governors and deputy government ministers (among many others) on various charges. Just earlier this month, Putin fired more than 50 officers of Russia’s Baltic Sea fleet, including a vice admiral.

Russia is also no stranger to purges. Josef Stalin’s Great Purge from 1936 to 1938 is perhaps the most famous, but they were a fixture of his rule. Historian Robert Conquest once estimated that 20 million died as a result of purges during the Stalin era and Alexander Solzhenitsyn immortalized the grim conditions of the gulag in print in 1973. The Soviet Union maintained its cohesion after Stalin’s death through its security services and Putin has gone back to that formula to keep his hold on the country as its economy suffers from low oil prices that will not be improving significantly anytime soon.

Putin is also no Stalin and these campaigns pale in comparison to what Stalin was capable of at the heights of his rule. Even more so than China, Putin is operating from a place of weakness. The Russian economy is in shambles, it misplayed its hand in Ukraine and now Putin is trying to keep his vast and struggling country together. It’s not clear whether this is one larger concentrated effort or whether Putin’s targets are more surgical. Perhaps like the FSB, Putin’s moves with the Baltic Fleet are a bit of spring cleaning to make sure his forces are competent in case of conflict. Or perhaps it is an issue of loyalty and Putin is eliminating sources of dissent throughout the system. Clearly, Putin is under pressure and he is doing what he can to control the situation.

Turkey has a less storied history of purges. Coups were the main vehicle for the Turkish military to maintain a degree of control over political affairs in the country. They happened in 1960, 1970, 1980 and 1997 (although often purges follow the coups). Much is being made of Erdoğan’s purges in response to the failed coup, but the ground for the failed coup this past month was in part laid in the early 2000s, when Erdoğan’s Justice and Development Party (AKP) and the Gülenists sought to declaw some of the military’s authority.

Evidently, the AKP was not able to eliminate all opposition to its power. But it was able to do enough damage to cripple military opposition to the point that the recent coup attempt was simply not strong enough to take control of Turkey as it had in 1960 or 1980. Together, the AKP and the Gülenists took on the “deep state” in Turkey. Now, Erdoğan has turned on the Gülenists – the “parallel state” – to get rid of another potential challenger.

Unlike Russia or China, Turkey is an ascending power. Every major power in the world went through a period of chaos and violence before they rose to prominence. The United States had the Civil War. France had the French Revolution. Japan fought a civil war before the Meiji Restoration. The list goes on. Erdoğan is retiring hundreds of senior military officers and firing thousands of judges and academics. CNN estimated that over 50,000 officials have been purged from the government so far, and there are likely to be more in the future. If Turkey is to emerge as a regional power, it must first develop internal cohesion. That can happen as a result of democracy or purges; the method isn’t important. The crucial fact is that unlike Russia or China, here the purge is not just about domestic control, but also a potential vehicle for power projection.

Some might balk at the inclusion of the United States in this piece. I would respond by saying that Chris Christie’s recent comment that Donald Trump would ask Congress to change civil service laws so he could more easily “fire” – read, purge – Barack Obama’s appointees should raise this question in the mind of U.S. readers. Reuters used the word “purge” in its headline on the story. However, purges in the U.S. government aren’t something new. Obama named an entirely new Cabinet of officials (except for Robert Gates) when he ascended to the presidency in 2009. That is a form of a purge. Franklin D. Roosevelt tried to pack the Supreme Court. In 1828, after Andrew Jackson won the presidency, New York Senator William L. Marcy famously said that “to the victor belong the spoils.” Both are also forms of purges. The U.S. just carries out its purges once every four years rather than letting the pressure build up in the system over a span of decades. It’s a mark of the health of a liberal democracy if its politicians, generals and officials can be summarily dismissed.

I am not trying to establish a direct equivalence between these countries. Obviously, the U.S. isn’t Russia. And obviously Russia isn’t the Soviet Union. I am, however, arguing that purges are a necessary and at times healthy part of politics, and that it just so happens that four countries crucial to our geopolitical model are either in the throes or on the cusp of major purges. One of these – the United States – is doing it on schedule. The others are on the front lines of global crises, and each is looking inward as a result. The fact that the word “purge” has a negative connotation can often hide its import or lead to a sense of moral superiority. Neither are productive when trying to understand what’s really at stake.