I have been writing for a while about what I, and others, regard as the fundamental social and economic problem facing the United States: the crisis of the declining purchasing power of the middle and lower-middle class. I expect it to cause significant internal tension, which will to some extent be reflected geopolitically. The problem is not one of inequality. Historically, Americans have been comfortable with wide disparities of income.

The problem is the contraction of the purchasing power of those living at or below the median household income. As we calculated, the take-home pay for someone earning the median income, after taxes and other deductibles, and assuming health care from their employer, would run at about $3,600 a month and would be enough, at current interest rates, to purchase a house and a car and maintain them without savings. Someone at the lower-middle class level would be earning about $2,000 a month, after taxes and with employer-provided health care. The lower-middle class would no longer be able to do more than rent an apartment.

The middle class had been able to buy a house a generation ago, but no longer. The middle class has lost all frills and with any greater deterioration of purchasing power would be priced out of the housing market as well.

That is why today’s news that the median income rose dramatically, by 5.2 percent between 2014 and 2015, is extremely important. It raises the possibility that the decline in income, and therefore purchasing power, has been reversed. With inflation in key commodities somewhat contained and income surging, this could be the reversal of a trend that has been going on for almost 20 years. 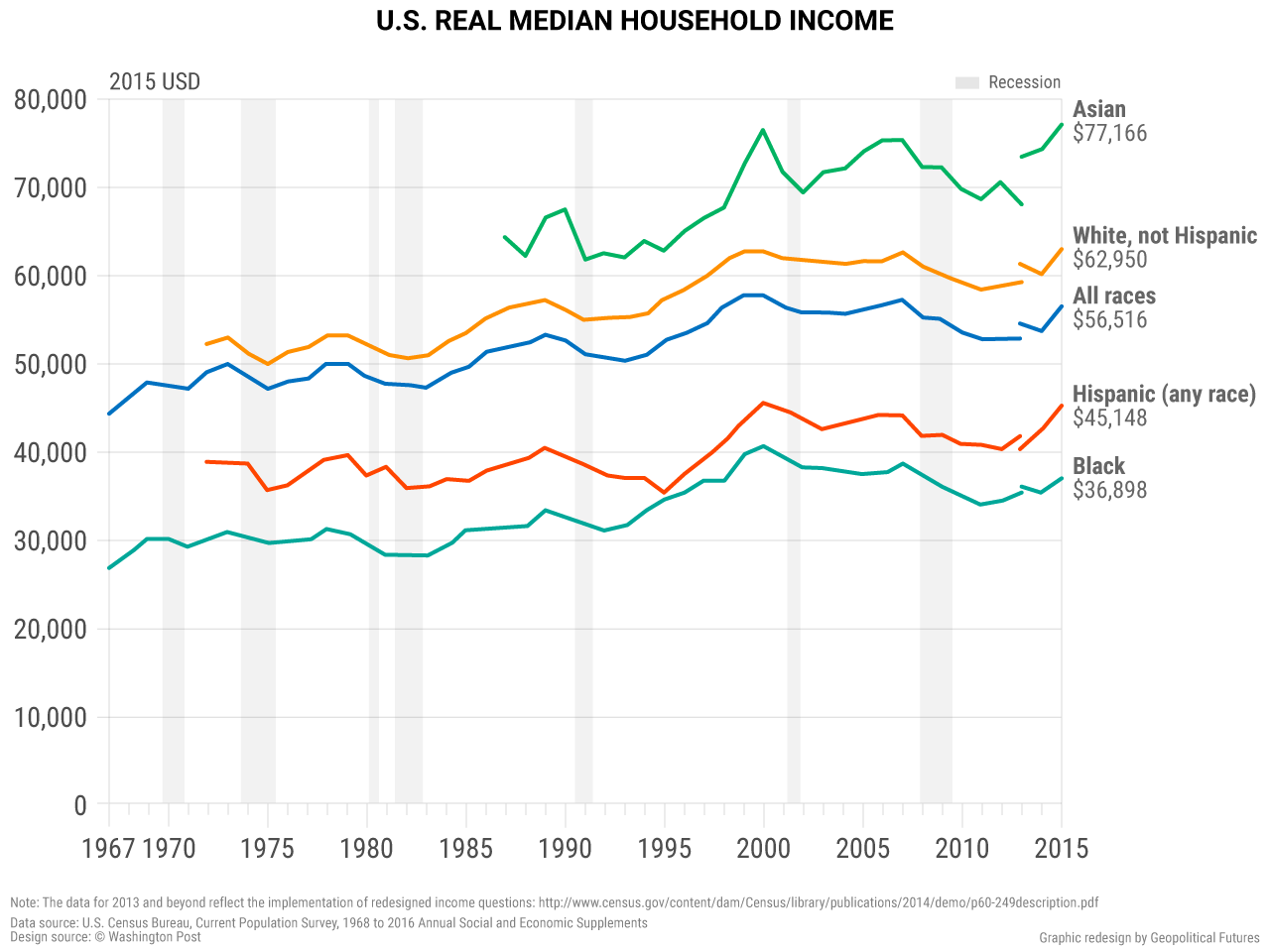 When you look at the chart, however, we have not yet had a breakthrough. Real median household income even after last year’s reported increase is 1.6 percent lower than in 2007 and 2.4 percent lower than the peak in 1999. There has been no expansion – this is the first increase since 2007. It is not just a matter of having taken this long to recover, but that having taken so long, it is not clear that it is sustainable – indeed the surge indicates emerging problems.

One of the early markers of a recession is that economic indicators start surging. Increasing prices for various classes of products indicate an increasing shortage of those products, which indicates that the economy is reaching a structural limit. The illusion sets in that we have reached a new normal, that traditional rules don’t apply and that the business cycle has been abolished. This is what Alan Greenspan called “irrational exuberance” just before the economic breaking point that signals a crisis initiating a recession.

The startling extent of the growth in wages, strikingly outpacing the rest of the economy, strikes me as a classic sign of the end of a cycle. In this case it is not housing or dot-coms that have surged without clear economic justification, but wages. With unemployment reported at 4.9 percent by the Bureau of Labor Statistics, the rapid growth of wages in 2015 seems, on first impression, as representing a structural shortage of labor. Businesses expecting the current expansion to continue are buying labor at higher prices, but regardless of how high the price is, the type of labor needed to maintain the expansion is not there. The economy will decline and wages will sharply return to at least prior levels.

It would be good for individuals if there were no recessions. But the business cycle is essential to a healthy economy. Without a slowdown, irrationalities and inefficiencies that creep into an expanding economy grow and eat away at the economy. Of course they are precisely the thing that makes a recession inevitable. Economies in which the state avoids recessions, or at least marked slowdowns, tend to create long-term problems. So recessions are necessary, as pruning is to plants.

My view at this point is that rather than celebrating this much needed increase, it should be taken as a warning sign of an overheated economy. Rather than concluding that a long-term and significant problem has been reversed, we need to read this as a troubling episode in that crisis. As we have seen, once dot-coms or residential home prices crash, it takes a while for their prices to rise. They may not reach prior values for a long time. If that is the case here, then the result could be lower wages for a long time.

From my point of view, wages and growth must at least track. We have had poor growth since 2008, and wages since then have very roughly reflected that. Prior to 2008, growth outstripped wage growth. So the middle class and below missed out on the pre-2008 growth, but suffered the worst of the post-2008 world. Now wages are outstripping growth. If growth picks up dramatically I will change my mind, but at this point, these numbers worry me more than they delight.