The Turkish military said on Feb. 6 that one soldier was killed and five more were wounded in a mortar attack while attempting to set up a military outpost in northwest Syria. The Turkish military statement did not include any details about who had attacked its soldiers, but Arab News – an English-language daily based in Saudi Arabia – claimed that the attack had been carried out by “Iranian militias.” A Saudi media outlet has an interest in playing this up, but various other reports simply noted that “pro-regime forces” had carried out an attack on Turkish forces. Either way, Turkey and Iran are on a collision course.

The two countries started down this path after Iran and Russia supported an offensive by Syrian President Bashar Assad’s regime into Idlib province, one of the de-escalation zones whose security Turkey was supposed to guarantee. That offensive, and the regime’s apathy in response to repeated Turkish objections, forced Turkey’s hand and resulted in last month’s Turkish incursion into Afrin. Despite stiff resistance, the incursion is making steady progress, to the extent that Turkey has been trying to set up a military outpost southwest of Aleppo for more than a week.

Turkey has already clashed with pro-Assad regime forces in this same location. On Jan. 29, a Turkish convoy of almost 100 armored vehicles, backed by the Turkish air force, attempted to establish a position between pro- and anti-Assad regime forces southwest of Aleppo. According to the Institute for the Study of War, the convoy met heavy resistance from Assad regime forces, halting the initial Turkish advance. At the time, the only report out of Turkey came from the Turkish General Staff, which noted that a Turkish soldier and a civilian support worker had been killed by a car bomb attack on a military convoy.

The Assad regime has consistently criticized the Turkish incursion without doing much about it. Aside from a few small-scale attacks and some leaks to Reuters claiming deployment of “new air defense and anti-aircraft missiles,” Assad’s forces have focused more on repositioning to defend Aleppo than on directly engaging Turkish forces. This was in part because Turkey’s incursion did not pose an immediate threat. The invasion of Afrin was beneficial to Turkey, however, because it allowed Ankara to connect previously isolated anti-Assad rebel groups and also put Turkey in a better position to threaten Aleppo directly should Assad continue his advance into Idlib. This was not an ideal circumstance for Assad by any means, but it was a limited incursion within tolerable boundaries.

Turkey’s recent moves in southwest Aleppo are more ambitious than the initial incursion, as they are increasing the threat to Assad forces. The position the Turkish military is reportedly attempting to establish is well outside of the Afrin region. The Kurdish-dominated Afrin region does not extend all the way to Aleppo; the regional capital, also named Afrin, is about 23 miles (37 kilometers) north of Aleppo. But Turkish forces have pushed well beyond this, reportedly attempting to establish an outpost in al-Eis, a Syrian town of roughly 5,000 that is about 12 miles from Aleppo – but southwest of the city. Furthermore, al-Eis is not in Idlib province – where Iran and Russia had agreed, at least in principle, that Turkey should be responsible for security – but in Aleppo province itself. 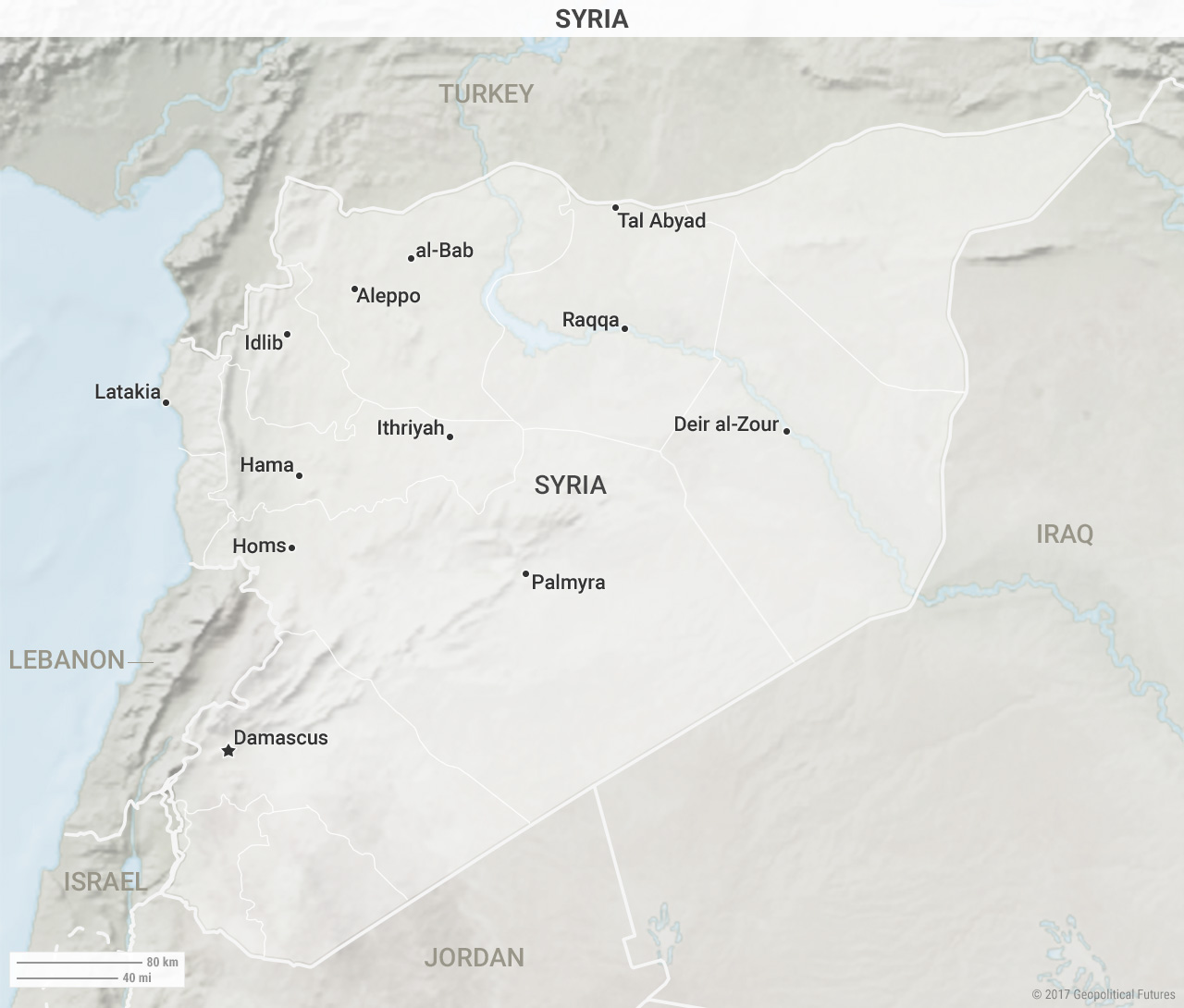 It makes sense, then, that the Assad regime and its Iranian backers have twice attacked this extension of Turkey’s incursion. Taking Afrin meant shortening the distance from Turkish territory to Aleppo. Setting up an outpost in al-Eis means preparing for a potential assault on the regime’s position in Aleppo. This is why Iran, in particular, has reacted with such hostility to Turkey’s recent moves, with President Hassan Rouhani saying on Feb. 5 that Turkey had flagrantly violated Syria’s sovereignty, and Iran’s foreign minister saying that Turkey’s actions were creating “insecurity, instability, and terrorism.”

Noticeably quiet in this squabble-turned-shelling is Russia, without whose tacit approval Turkey could not have entered Afrin in the first place. (Russia still controls the Syrian skies and would have had to approve any Turkish air deployments across the border.) Russia had a fighter jet of its own shot down by Syrian al-Qaida last week and in response has intensified air raids on jihadist targets in Idlib province. But Russia has not gone so far as to denounce in public Turkey’s invasion of Afrin. Still, Russia may very well have given equally tacit approval to Assad and Iran to attempt to block Turkey from ensconcing itself so far into Assad-controlled territory and so far outside of the stated purview of its Afrin operation. (It also bears mentioning that Turkey has carried out fewer airstrikes this past week, perhaps indicating Russian disapproval behind the scenes.)

On the one hand, Russia gains from all of this. It has decent relations with Turkey and an even stronger partnership with Iran, but that is an ephemeral state of affairs. Russia has long-term problems with both. The more Turkey and Iran are focused on competing with each other, the less focused they are on competing with Russia. Still, this is too much, too soon from the perspective of Russia, which is relying on a diplomatic settlement to the Syrian civil war so it can withdraw its military assets from the country in glory. Bringing home a fighter pilot in a coffin, watching its trade mission get bombed in Damascus and seeing the situation on the ground around Aleppo deteriorate to this extent was not part of the plan, and might necessitate new and more substantial Russian commitments to protect Assad.

None of this is a foregone conclusion yet. Turkey can still pull back, or at least reach a tense if workable arrangement with Assad and Iran about drawing temporary borders that satisfy the interests of both sides. But military operations like this, once underway, begin to take on a momentum of their own. All it takes is one serious miscalculation of the other side’s intention for a minor skirmish to turn into a more significant battle that would be hard to walk away from. Our view had been that 2018 would not be the year Turkey and Iran confronted each other directly; we expected their partnership, however uneasy, to continue throughout the year. That forecast is now being put to the test.