This time last year, Turkey was in the throes of a crisis. A faction of the military had tried to – and nearly did – overthrow the government. The putsch failed, and President Recep Tayyip Erdogan took the opportunity to purge the system of current and potential opponents to his rule. The purges haven’t stopped, and Turkey is still in a formal state of emergency, but the worst of the crisis has passed and Turkey is beginning to stabilize.

Now, the chaos isn’t in Turkey but around it. And one of the surest signs that Turkey is nearly back on its feet is the way it is confronting the chaos.

Consider for a moment the world from Ankara’s perspective. To the south, the Islamic State is slowly being crushed. In Iraq, it’s barely hanging on to its last strongholds; in Syria, it is under assault from the U.S.-backed Syrian Democratic Forces and the Russian-backed Assad regime. Turkey wants to see IS defeated, but it isn’t a fan of who is doing it: The SDF is made up of Syrian Kurds, who, to Turkey, are just as much a terrorist group as IS, and Turkey was an enemy of the Assad regime long before the Syrian civil war began. To the southeast, the Kurdistan Regional Government – an autonomous Kurdish region in northern Iraq – appears determined to go forward with an independence referendum on Sept. 25. Turkey has already told the KRG to cancel the referendum because it fears what a vote for independence would mean for the millions of Kurds who live in or on the border with Turkey.

Farther south, Iran and Saudi Arabia are flirting one minute and threatening each other the next. Turkey is getting in on the action, broaching the possibility of limited cooperation with Iran in some areas of mutual interest. Meanwhile, to the north, Turkish relations with Russia remain complicated and inextricably linked to the U.S.-Russia relationship. Russia and the U.S. are quietly cooperating in Syria in the fight against IS, but they are at loggerheads everywhere else. Across the Black Sea from Turkey in Ukraine, the U.S. is backing Russia into a corner, and two places we expect Russia to respond are the Balkans and the Caucasus. Turkey hopes to expand its influence into the former and is already a major player in the latter. Russian activity in either of these regions would affect Turkey, and the Turks must be ready for that.

Turkey’s response to these challenges is one that has become typical of Turkish foreign policy: It is trying to balance between all the various parties without solidly committing itself to any. The number of high-profile visits Turkey has hosted in recent weeks is telling. Last week, Iran’s chairman of the armed forces General Staff was in Ankara for talks. Earlier this week, Russia’s armed forces chief of staff also visited Turkey to discuss coordinating efforts in Syria. Then on Aug. 23, U.S. Secretary of Defense James Mattis arrived in Turkey for a marathon day of meetings with Turkish officials. 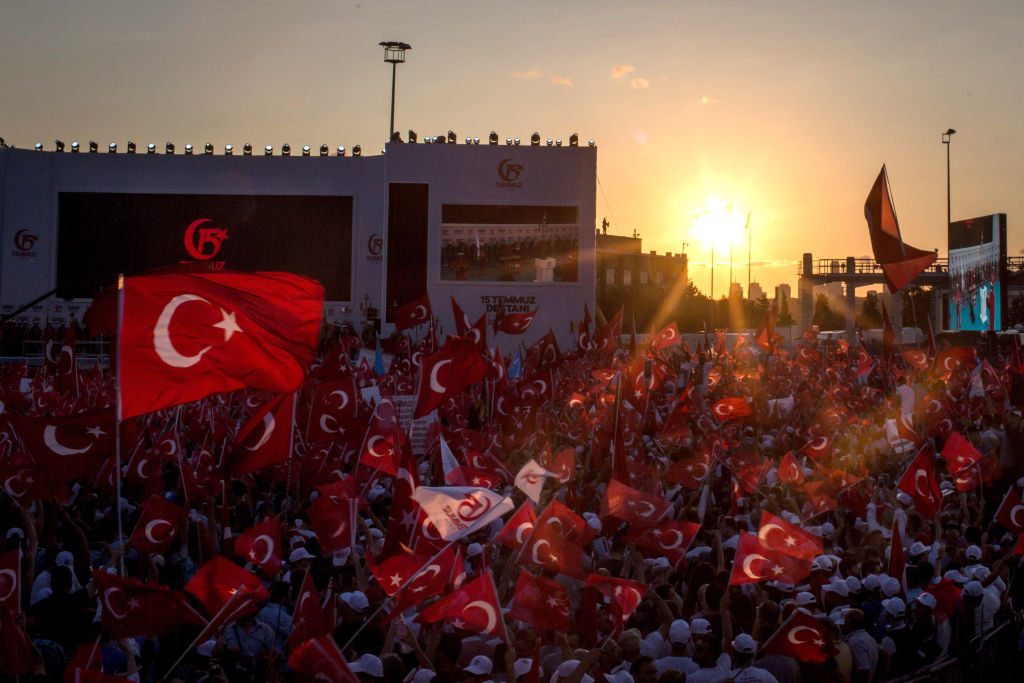 People chant slogans and wave flags in Istanbul on July 15, 2017, as they wait for official ceremonies to begin on the July 15 Martyrs Bridge on the anniversary of the failed coup attempt. CHRIS MCGRATH/Getty Images

With Iran, Turkey promised to boost military cooperation – something of a surprise considering that Turkey and Iran both aspire to regional leadership in the long term. Their interests are, ultimately, mutually exclusive. With Russia, Turkey agreed to tactical coordination in Syria and saluted Moscow’s understanding of Turkey’s concerns about the dangers posed by Syrian Kurds. As with Iran, however, Turkey has fundamental strategic differences with Russia in the short term (the future of Syria and Assad’s place in it) and the long term (competition in the Caucasus and southeastern Europe). There are tactical ways in which these powers can help each other – Iran and Turkey against the Kurds, Russia and Turkey against U.S. influence in the region – but these are not long-term alliances.

Then there is the U.S., with which Turkish relations have been deteriorating for years. The U.S. decision to begin arming Syrian Kurds in May was another blow to relations, and Mattis’ visit appears to have been in large measure to patch up the issue. The official statements out of the Pentagon are typical of political statements: sweet sounding with no substance. But unnamed Turkish officials have been telling any reporter who will listen about how Mattis pledged to help Turkey fight the Kurdish PKK militant group and how American support for Syrian Kurds is limited to the duration of the fight against the Islamic State. That Mattis came out publicly against the KRG’s independence referendum probably didn’t hurt either. For the moment, Turkey seems more publicly comfortable than it has been with the U.S. in months, so whatever Mattis promised in Ankara had the desired effect.

It’s the balance between Russia and the U.S. that is particularly difficult for Turkey to strike right now. In the coming years, Turkey’s imperatives will compel it to encroach on areas that Russia considers within its sphere of influence. Turkey isn’t ready for that conflict, and in the interim, Russia is a crucial player in the Caucasus and a powerful one in the Middle East.

Turkey’s imperatives jibe better with the U.S. vision for the region, but it isn’t a perfect marriage. The U.S. seeks a balance of power in the region and wants Turkey as a junior ally; Turkey sees itself as a rising power that doesn’t have to do anyone’s bidding, even if the one asking is the mighty United States. Turkey isn’t strong enough to push back against both, and kowtowing to one does nothing to advance Turkish interests either, hence its complicated relationship with both.

As if to underline the complexity of the game Turkey is playing, Mattis’ next stop after leaving Ankara was Kiev. Both Ukrainian and Russian media sources quoted Mattis as saying the U.S. had approved the delivery of $175 million worth of “special equipment that will strengthen the defense capability of Ukraine.” U.S. media’s reporting on the issue omitted this particular detail, but even so, there can be no doubt about the tone of Mattis’ meeting with Ukraine’s president and his comments afterward. The defense secretary decried Russian aggression and vowed that the U.S. would not tolerate Russian violation of Ukrainian sovereignty.

Mattis stopped short of throwing down the gauntlet: The U.S. is still debating whether to supply Ukraine with defensive weapons such as anti-tank missiles. Doing so would cross a serious line from Russia’s perspective. And there have been hints that the U.S. is at least open to dialogue: An upcoming meeting between the U.S. special envoy to Ukraine and one of Russian President Vladimir Putin’s presidential aides could be a step toward defusing the situation. But between Mattis’ strong language and recent U.S. sanctions against Russia, U.S.-Russia relations outside of Syria are trending toward distrust and hostility. Russia can absorb only so many challenges from the U.S. before the Kremlin will need to demonstrate that it is strong enough to prevent the U.S. from pushing it around.

All these issues matter to Turkey, and now the Turks are trying to formulate a coherent plan to pursue their interests that doesn’t outstrip their capabilities. For all of Turkey’s threats to intervene in Syria or to attack various Kurdish groups, it has stayed out of the fray. Turkey’s foreign minister even ruled out closing the border with the KRG if it goes through with its independence referendum. Turkey’s primary goal is to demonize the Syrian Kurds, who have more in common with Turkey’s Kurds than they do with most of Iraq’s Kurds, and to leverage the support it can offer to Russia and the U.S. to align the policies of both with Turkey’s immediate concerns.

The coup attempt weakened Turkey briefly, especially its ability to project hard power. But it also gave Erdogan a chance to clear the deck and pursue grander ambitions. Now, after a year of recuperation, Turkey is hosting the top defense leaders of the U.S., Russia and Iran, all in the course of a week and a half. Not only that, but those representatives are all coming to Turkey, and Turkey is setting the price for its help without committing itself to any agenda except its own immediate ones: to keep its national integrity intact, to rebuild its military and economy, and to let everyone else weaken themselves by fighting each other.

Turkey wants to stay in the eye of the storm as long as it can, but ultimately, Turkey can’t control everything that happens around it. All it can do is make itself strong enough and shape its regional environment enough so that when it does have to step out into the storm, it can protect its interests. The most important thing after this week is not just that Turkey is articulating that vision, but that it is forgoing opportunistic relationships to see that its vision comes to pass.

The Philippines’ Role in US Strategy