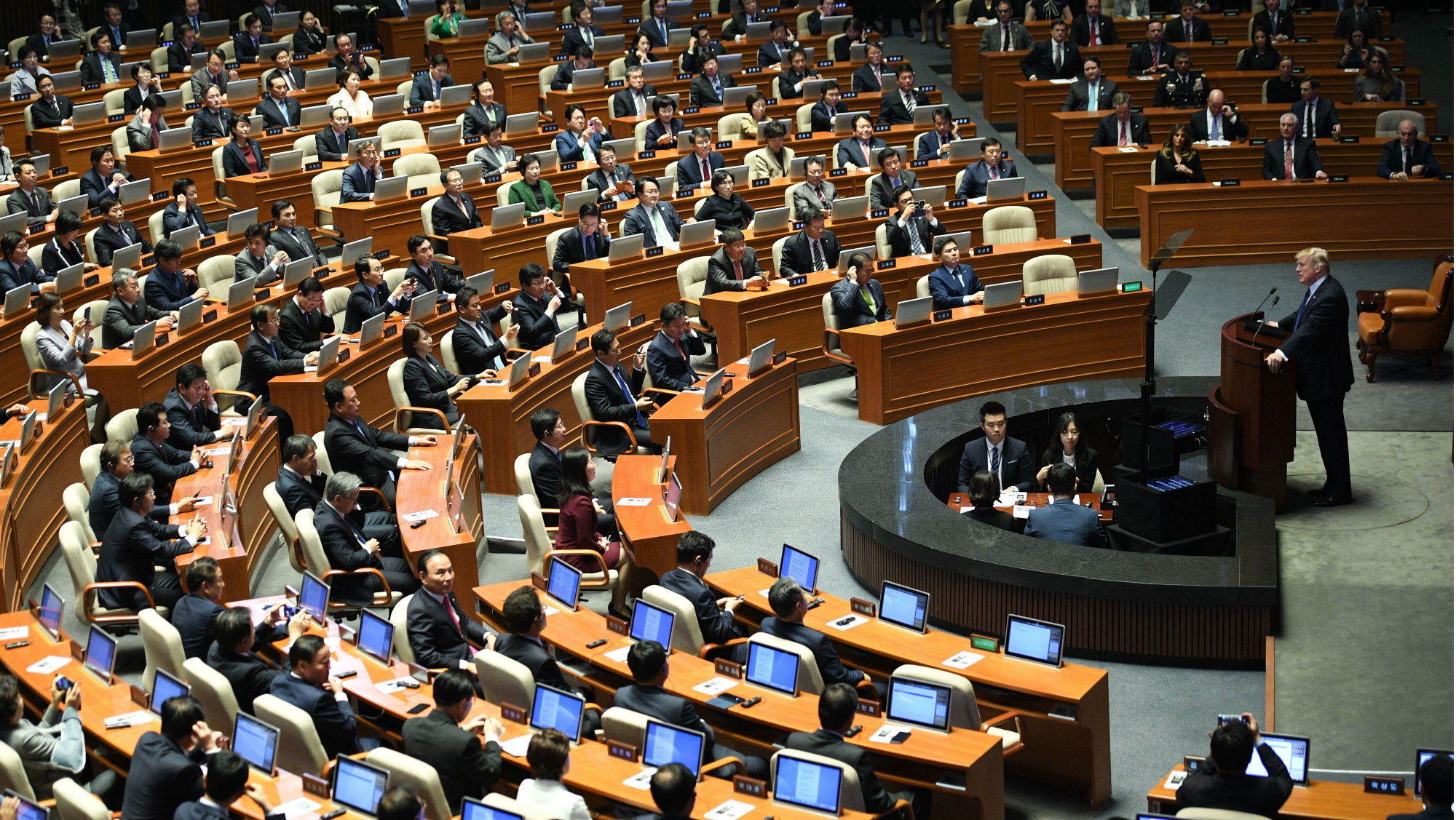 The importance of any speech is tricky to gauge. Occasionally, they can have great significance, like when Secretary of State Dean Acheson left South Korea out of the U.S. security umbrella in a speech to the National Press Club in 1950, an omission that, in a way, helped start the Korean War. But mostly they reside in the garbage bin of history. There’s a wide gulf between rhetoric and reality, and what is said for political purposes often has little to do with the impersonal forces that shape action. I remember watching then-Secretary of State John Kerry thunder away at a State Department briefing about Syria’s use of chemical weapons in August 2013, thinking to myself that surely a U.S. military strike on Syria was imminent. (I even went on television and said as much. Thankfully, the internet saves all things, so I can always look back and relive my mistake.) At the time, I couldn’t see how else Kerry’s severe language could be explained. But of course, the U.S. decided not to strike, despite then-President Barack Obama’s red line and despite Kerry’s fiery speech.

On Nov. 8, U.S. President Donald Trump gave us a new speech to consider. Addressed to South Korea’s National Assembly, it had three main objectives. First, to convey to South Korea the gravity of the situation on the Korean Peninsula and the depth of the United States’ commitment to preventing North Korea from acquiring nukes that threaten American soil. Second, to begin building a case to the American people for the U.S. to fight again on the Korean Peninsula. And third, to scare Kim Jong Un, and any country that may support his regime, into capitulating before a war starts. The odds of Trump achieving the third objective are slim at best, which means he will soon face a grave decision. What he decides will define his presidency and shape the balance of power in East Asia for years to come.

Trump’s remarks to the National Assembly were effusive and complimentary, but the content of the message was no different from his prior comments about South Korea. In September, he took to Twitter to criticize Seoul for what he called appeasement of the North Koreans. Many feared at the time that Trump’s comments may poison relations between Seoul and Washington. The tweets, however, were only an expression of frictions that already existed. The problem in the relationship started May 9 with the election of President Moon Jae-in, whose administration opposes a pre-emptive U.S. strike on North Korea. 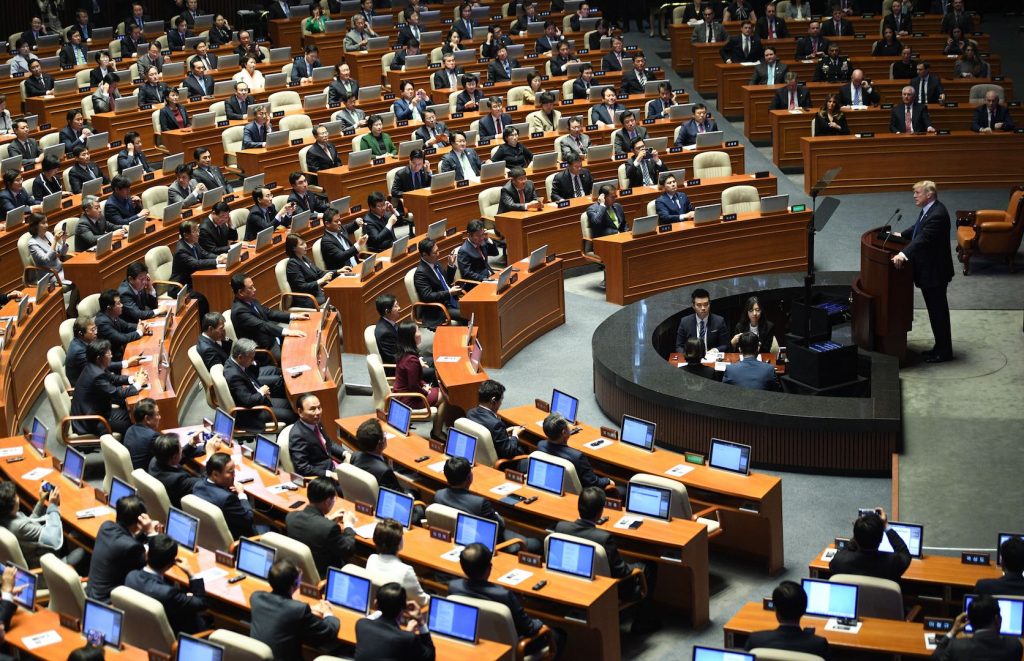 This threw a wrench in U.S. plans. From an operational perspective, attacking North Korea without South Korea’s help makes an already difficult operation close to impossible. There had been several signs in the first half of the year that the U.S. was preparing for military action against North Korea. In fact, at one point in May, three U.S. aircraft carriers had converged on the Western Pacific, and the U.S. seemed poised to strike. But Moon’s election forced the U.S. to slow its preparations and devote additional time to diplomacy. From a political perspective, Seoul’s defiance of Washington suggested weakness. Pyongyang intuited that there may be a split in U.S.-South Korean relations that it could exploit to bring about one of its long-cherished goals: the complete withdrawal of U.S. forces from the Korean Peninsula.

Despite Trump’s lofty rhetoric in Seoul, little has changed since the September tweets. South Korea and the U.S. still don’t see eye to eye on what should be done about North Korea. As long as that is the case, the U.S. will find it difficult to convince the North that it should fear American threats. So although Trump was far more gracious speaking to the South Korean National Assembly than he was on Twitter, his message was the same: Peace in our time can be achieved only through strength. Trump’s entire visit to Asia is symbolic, an attempt to shore up U.S. relations with key allies in the Pacific. But no ally is more important and more skeptical right now than South Korea, and no speech is going to allay South Korea’s concerns.

Other parts of Trump’s speech focused on the nature of North Korea’s dictatorship. These remarks were directed not at South Korean lawmakers – they are plenty familiar with their neighbor’s woeful economic situation and strict societal controls – but at the American public. That Trump’s speech was delivered at 11 a.m. Seoul time meant that it aired during prime-time hours in the United States. Trump laid out the reasons it is important for the United States to ensure that North Korea does not acquire nuclear capabilities. He made his argument from a security standpoint, an ethical standpoint and even a religious standpoint.

But the two men Trump was speaking to most forcefully were Kim Jong Un and Chinese President Xi Jinping. Trump’s words for Kim have been consistently bellicose, and that trend continued in Seoul. But Trump also went out of his way to criticize China in the speech. At one point, he told a story about a baby born in North Korea whose father was Chinese. The baby, according to Trump, was killed and taken away in a bucket, deemed undeserving of life because of its ethnic impurity. He finished the story with a rhetorical question: “So why would China feel an obligation to help North Korea?”

Trump is now in China, meeting with Xi. Publicly he has said nice things about the Chinese leader – that he has been very helpful on the North Korea issue and that there are many areas where the U.S. and China will be able to cooperate, such as the much-ballyhooed but insignificant business deals that will be signed during the trip. But make no mistake – the main topic of conversation between Trump and Xi is North Korea, and here, Trump has very little to be happy about. The U.S. president will demand to know why China has been selective in its enforcement of sanctions against North Korea, and why China is trading more with North Korea in 2017 than it was in 2016, even if it has abided by restrictions on importing North Korean coal. Xi will continue his charade of looking helpful on North Korea without actually helping.

The obstacles that have blocked an attack so far are still in place. South Korea, the critical ally, remains unconvinced that the U.S. can protect Seoul from North Korea’s artillery. The U.S. electorate favors an attack right now, according to recent polls, but once the fighting starts, support in the U.S. would decline faster than North Korea’s resolve. And U.S. diplomatic efforts to denuclearize the peninsula are being stymied by China and Russia, both of which have an interest in seeing the U.S. bogged down and distracted with what is, from their perspectives, a side issue. It wouldn’t take much to watch Trump’s speech and come away thinking the U.S. is readying for an imminent attack on North Korea. (After 2013, I should know.) But it is more likely that this is a continuation of the U.S. attempt to cow North Korea into submission, not a cry to let slip the dogs of war.