For all that isn’t known about Chinese economics and finance, it’s no secret that China has a debt problem. But debt may be even more problematic in light of new figures recently disclosed by the China Banking Association. Its 2017 annual report showed that off-balance sheet assets in the Chinese financial system are 109 percent of on-balance sheet assets (approximately $38 trillion). In other words, there is more debt in off-balance sheet assets than is currently held by banks. This is systemically risky for a country such as China, which relies heavily on its real estate industry to spur economic growth and whose economic problems are uniquely political.

What are off-balance sheet assets, and what is the shadow banking system? When a bank lends money, the loan is recorded on its balance sheet, a ledger that records the quantity of loans outstanding (its assets) versus its deposits (its liabilities). Credit extended by banks, then, are “on-balance sheet” assets. An off-balance sheet asset is a loan or investment that’s made that, for whatever reason, is not included or accounted for on the bank’s balance sheet. A bank might be incentivized to move assets off its balance sheet because if it does not need to record the loan on its books then it doesn’t need to carry reserve provisions for them, which lets a greater portion of its capital be lent out to generate profits. Of course, this increases the risk of bank failure if enough loans become nonperforming.

In China, many banks have subsidiaries that manage what are called wealth management products. WMPs seek returns on invested capital that are higher than can be provided for by bank deposits. Since they are technically not deposits at the bank – instead, they are managed by a separate corporate entity – they are not subject to banking regulations. (Banks, for example, are required to hold a certain amount of capital reserves.) Assets managed in WMPs and other similar bank subsidiary products are often not recorded on the parent bank’s balance sheet. The aggregation of these entities that manage off-balance sheet assets is what’s known as the “shadow banking system.”

Initially, WMPs were seen by retail investors as a substitute for deposits. Many believed they, like bank deposits, came with explicit guarantees by the government. Since WMPs provided higher yields, they became an attractive alternative for Chinese investors and savers. WMPs, however, are not explicitly guaranteed by the government since they are not deposits. And though this misconception has largely been corrected over the past few years, there is still a tacit understanding that the government will sometimes guarantee them. And why wouldn’t there be? Beijing has, in fact, bailed out large, failing WMPs even when it was not legally obligated to do so.

WMPs provide higher yields to investors than deposits do because they invest in riskier assets and projects. And since China doesn’t have too many opportunities for investment other than real estate, WMPs tend to invest heavily, though not exclusively, in this sector. Moreover, since the WMP investments are not considered banking deposits, reserve requirements that compel banks to withhold capital against the loans they make as protection against losses do not apply equally to WMPs. So these subsidiaries can invest far more capital – often in real estate projects that would be too risky for the bank itself to underwrite – with even fewer protections than banking reserve requirements would normally provide for.

It is not just the higher returns that appeal to investors. WMPs provide investors with exposure to real estate without the same upfront capital requirements to own real estate outright. Further, WMPs often have short investment periods – three, six or 12 months – which reduces the risk to investors that they will lose or not fully recover their money. But WMPs often fund projects with timelines exceeding the maturation periods of the underlying securities providing those funds. For example, a new building may take two years to be built but be funded with WMP capital with a 6-month maturity period. This creates the possibility that the capital required to complete the project will dry up midconstruction.

Investing too much in real estate, sometimes with insufficient funds, is a blight on the Chinese economy. If developers go out of business, WMPs will be unable to repay their investors in full, essentially footing the central government with the bill. Whether it decides to pick up the bill is another question. Though the central government allowed smaller WMPs to go under, it has intervened to prevent larger ones – ones whose failure could imperil the economy – from going under.

The central government understands these risks, and it knows it must try to lower the amount of credit extended through the shadow banking sector to the real estate industry. But the government can’t move too quickly. Reducing the amount of available credit drives down real estate prices, and when prices fall too quickly, developers are unable to sell new projects at the prices they used to underwrite the loan – or even above the value of the debt they took out to complete it.

Since other areas of the economy are dependent on real estate – for example, state-owned enterprises that provide construction material for real estate – a rapid correction in real estate prices could impact more than just real estate. Many of these SOEs are politically important because they provide jobs to urban populations. Some SOEs also pay out pensions, which are important for retired city residents. The more inflated the real estate sector becomes, the more painful the eventual contraction would be. A real estate-driven recession would not be confined to real estate – it would affect the entire economy and financial system. 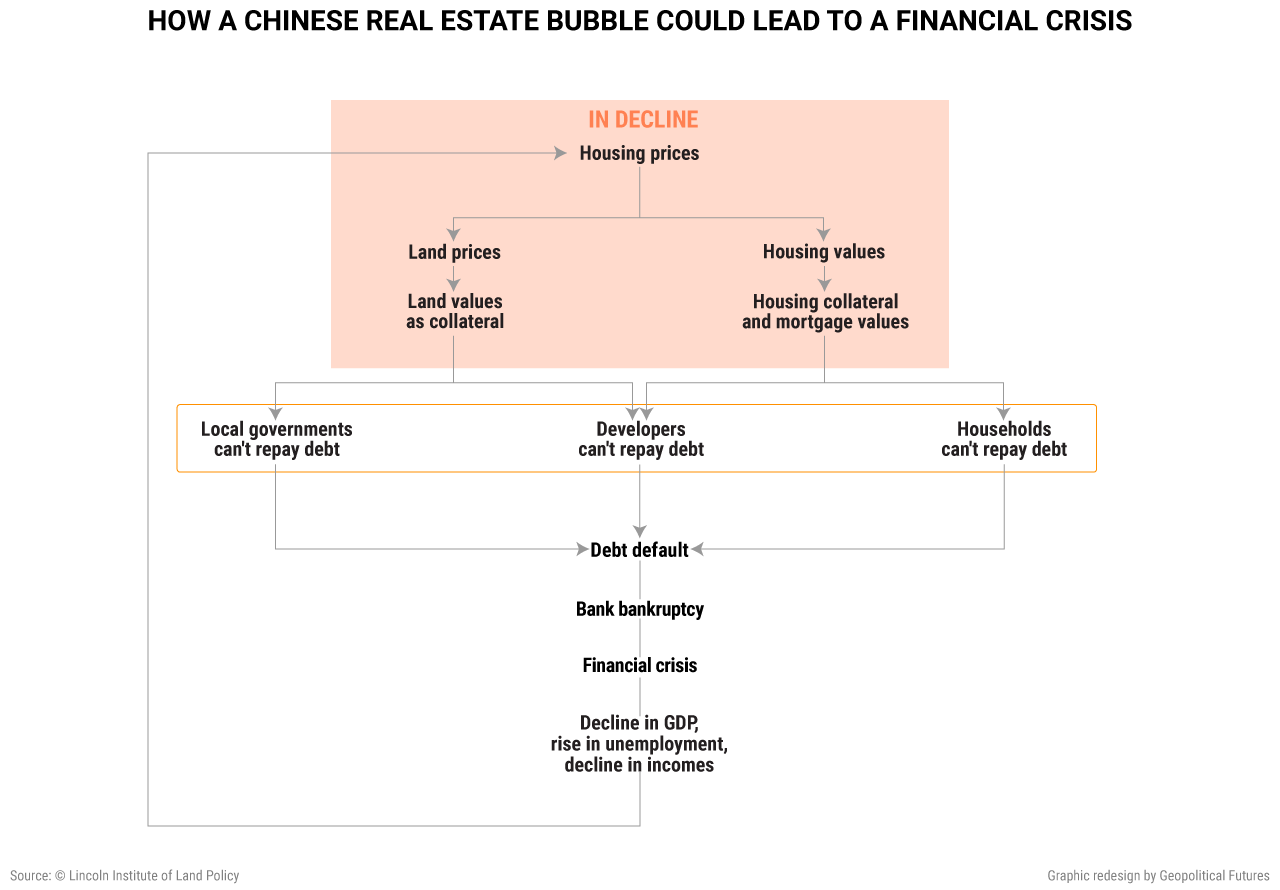 Thus is China’s balancing act. It must decrease credit and prevent housing prices from rising too far – which heightens the risk of a rapid contraction – without driving down prices by restricting credit. The government has pursued this policy incrementally. The People’s Bank of China gradually decreased liquidity in the banking sector through monetary facilities like the medium-term lending facility and its shorter-term standard lending facility. Restrictions on real estate transactions have been imposed in major cities such as Beijing, including requiring greater down payments, preventing homeowners from purchasing multiple houses for speculation instead of owner-occupation, and re-zoning multi-use property to commercial only.

The government has also attempted to address risks created by the shadow banking sector directly, increasing reporting requirements for WMPs and other banking subsidiaries so that regulators can better monitor the extent of the risk caused by the amount of credit they have extended to the market. In April, by implementing new regulatory requirements, the government restricted $1.7 trillion in liquidity that WMPs and other shadow banking entities previously had access to. This contributed to an unusual inversion in the yield curve of Chinese government securities that we observed in which both the seven-year bond and five-year bond interest rate traded above the 10-year bond. As capital was pulled from the WMPs, demand for these bonds decreased, driving their interest rates up. The inversion was caused in part by the lower trading volumes of the five- and seven-year bonds than the 10-year. This means the decrease in demand caused by the government’s restriction of liquidity had a greater impact on total demand for five- and seven-year bonds. Yield curve inversions are often signs of a coming economic recession, and have fairly accurately predicted recessions in the U.S.

Despite China’s initiatives to make the shadow banking system more transparent and to gradually reduce credit, the China Banking Association’s annual report shows the risks are still there. How successfully the government handles shrinking shadow banking loans will help determine the extent of systemic risk and the government’s ability to mitigate it.

Economics and politics are useful prisms for certain issues, but geopolitics dictates that they are inextricably linked. Perhaps in no country is this more apparent than in China, where the government has a much higher degree of control over its economy than most others. Separating these two issues is impossible for the Communist Party, and it must continue to consider the political ramifications its economic solutions would create.

What the Battle for Idlib Really Comes Down To