During President Donald Trump’s inauguration speech last Friday, he reiterated his promise to destroy the Islamic State. Previously, he also pledged to reduce international commitments that don’t benefit the United States. The two statements are not incompatible. Trump is simply saying that the destruction of IS is fundamental to the national interest. On the surface, this is not an obvious priority, so we must try to understand why IS is so important in his thinking.

IS is a Sunni movement, primarily located in Syria and Iraq, committed to re-establishing the caliphate and dominating the Islamic world. It has established a relatively contiguous area of control stretching from Mosul to Palmyra. Within this space, it has developed a government, and its capital is Raqqa. It maintains rudimentary services, raises taxes and conducts trade. It also maintains a substantial military that has been battling forces trying to retake Mosul. If it succeeds in uniting the Islamic world under a caliphate, it could represent a global challenge. A modern industrialized society governed by a single, integrated state based on Shariah and possessing that much territory would be a very real challenge to American interests. 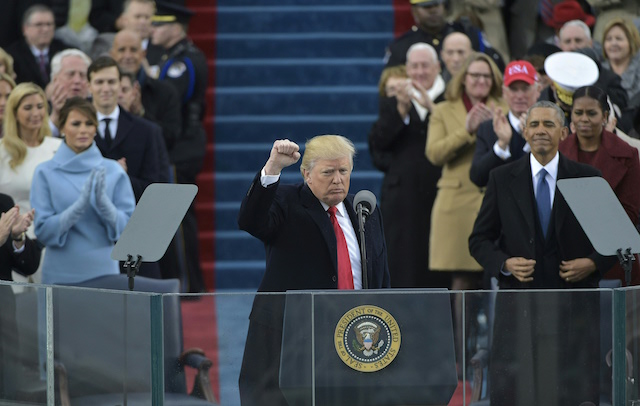 U.S. President Donald Trump pumps his fist after addressing the crowd during his swearing-in ceremony on Jan. 20, 2017 at the U.S. Capitol in Washington. MANDEL NGAN/AFP/Getty Images

IS is far from this goal and has many steps to execute on the way there, so the likelihood of this happening is extremely low. If it was moving in that direction, future intervention would make more sense. It also should be remembered that a Shariah-based industrial force able to project power globally would face tension between the social order commanded by Shariah and a truly global power. In addition, IS threatens regional powers like Turkey Iran, Saudi Arabia and Israel with its military capabilities, and others, including the United States, with intermittent terrorist attacks. In the end, the single power most hostile to the Islamic State is Iran, which IS challenges theologically and politically.

Looked at in this way, it would seem to follow that IS does not pose a direct threat now to the United States, and that plenty of intermediate, regional powers are in a position to block IS. Therefore, given the overarching theme of Trump’s global strategy, IS should be a problem for regional powers to deal with; the U.S. does not need to address it until much further down the line, if ever. We need to understand the reasoning for this.

We tend to think of the Middle East as we think of Europe: a group of independent nation-states collaborating or fighting with each other. Maps create this image, but they are deceiving. Thinking of only the Middle East is also problematic. To make sense of the issue, you need to think of the Muslim world, stretching from Morocco to the Philippines, and from Central Asia to Africa. It is a world of over 1.6 billion humans, roughly a quarter of all humanity.

The Muslim world was never under the control of a single caliphate, but massive regional powers emerged. For example, at one point the Mediterranean basin was controlled by Muslims. Their power dominated the Iberian Peninsula and stretched toward Vienna. Reasonable people might have thought that Christian Europe was vastly outclassed by Islam during that period. However, the balance of power there, in the Indian subcontinent and in Southeast Asia shifted back and forth between Muslims and their adversaries.

From roughly the 18th century, the balance began to shift toward the Europeans. As Christian European empires enveloped the world, this included the Muslim world as well. The Dutch in Indonesia imposed force that shattered political Islam in the East Indies. British and French imperialism overwhelmed political Islam in South Asia and North Africa, respectively. The Russian Empire imposed its force on the Caucuses and Central Asia. And as the Ottoman Empire weakened and fell, the Europeans overran the Middle East. European imperialism fragmented the political power of Muslims. It did not shatter the religious principles that powered political Islam. The ability to express them as a political force was limited by European power, but the core was not broken. And that core did not regard Islam as a private religion; it saw Islam’s public and private legitimacy and power as part of the same fabric. The religion was theocratic at its core. Its inability to act politically was developed over time, but it was not a permanent condition.

After the collapse of the European empires, a set of states remained, floating atop the wreckage the Europeans left behind. But beneath that wreckage was the layer of political Islam that had never gone away, however powerless it might have been the previous few centuries. It was that layer, freed from constraints, that gave rise to al-Qaida and IS, as well as numerous other organizations centered in the Sunni world, such as the Taliban. The emergence of political Islam was not an aberration, but a struggle on the part of Islam to return to its historical normal.

There is a great debate raging in the West about how to distinguish average Muslims from Islamist radicals. In the thinking that flows from Trump’s position, that is the wrong question to ask. Political Islam is Islam. Various weakened strands of Islam, broken by Europe’s domination, have pushed the political aspect to the side, but Islam is inherently a political religion. The core question is not distinguishing Islam and political Islam. They are one. However, this does not mean that political Islam must be savage.

But that doesn’t work at this point in history. After emerging from European domination, Islam is undergoing a wrenching revolutionary process. It is trying to reconstruct itself within the context of a dispirited Muslim community. Urgency and external pressure don’t radicalize Muslims. Rather, the entire process of reassertion is impossible without a radicalization of the Muslim community, because that process liberates the repressed beliefs of Islam. This pressure does not turn Muslims into radicals. It is release from pressure that opens the door to it. European revolutions, such as the Russian, German and French revolutions, proceeded barbarically. This should not bring anyone comfort. It signals what the human toll of creating an Islamic polity might be.

For the United States to back away from this and let nature take its course ignores the reality that radicalism tends to displace moderation, not the other way around. Therefore, simply allowing it to be contained by Turkey or Saudi Arabia fails to take into account that they are also subject to radicalization. Or to put it differently, the idea that radicalization is taking place misstates the reality. Islam is not searching for radicalization or moderation – but for authenticity. And an authentic Islamic state emerging to power is not in the American interest.

How, then, should it be dealt with? One solution is to continue the 15-year war that started after 9/11. All this does is strengthen the emergence of political Islam. The other is to use the balance of power, particularly Iran and Israel. The problem is they may decide not to be used, and in the case of Iran, what might result would be no solution.

Trump’s strategy would be to return the Muslim world to the status quo ante 1945. For centuries, Islam was political, on the defensive, demoralized and fragmented. That was achieved by Europe hurling itself against the Muslim world as it did against the rest of the world. And obviously, the Europeans are in no position to repeat that.

The key is to break the Islamic world’s growing confidence in itself. Defeating IS is not an end in itself but a means to an end. IS is merely a new construction of political Islam in its revolutionary form. But unlike other such movements, IS has stood and fought, indicating political Islam’s growing vigor. For Trump, the enemy is this rising confidence and vigor. Political Islam cannot be eradicated. But its confidence can. And notions such as “radicalization” that are used to argue against harsh measures miss the point. It is not anger at harshness that radicalizes, but pride and hope for the future that draws on it. That future has to be made enormously more distant.

Accepting this notion would lead to arguing for a massive insertion of U.S. forces designed not only to shatter a particular movement but to demonstrate the hopelessness of political Islam establishing itself for another century. This is what European powers did during their reign. The hopelessness of the situation was evident, and with it, the virtue of moderation. Without hopelessness, it is unclear what advantage there is in being moderate.

It is difficult to imagine what this attack would look like. I do not think that the Trump team believes defeating IS will solve this problem. The roots are in the population, and the population must be convinced that their hopes are beyond realization. The pronouncement on defeating IS and a large increase in the defense budget are of note. In my view, Trump appears to operate in a disjointed manner in order to keep his options open. He is aided in this by his enemies who deny there is any coherence to his thought process. But I have seen no evidence of incoherence, only things he doesn’t have the power to do at this point.

I do not understand what the military operation will look like, and I am of the generation that has seen too many plans burst into flames. I can follow his reasoning to the point that he wants to break political Islam. But in defense of his approach, we can say that the strategy of the last 15 years hasn’t worked, that former President Barack Obama’s attempt to be friendly didn’t help and that doing nothing and hoping for the best seems risky. None of the reasoning matters until the strategy is worked out.