During World War II, one needed to say only “the war” for others to know what was being discussed. We have reached the same point with the Russo-Ukrainian war. This is not what the Russians expected to happen. They expected the war to be over quickly because they regarded their military as self-evidently superior to what the Ukrainians would put on the field. Few nations start a war assuming they will lose. They start wars with the same expectation: Hit hard, and be home for Christmas. But the history of the world is filled with the stories of great armies and warriors fighting long and desperate battles. And the history of warfare is filled with examples of confidence meeting reality.

It is far from clear what the final outcome will be. The initial Russian offensive ended in failure, less because of Ukrainians forces, brave though they might have been, than because of a poorly developed Russian strategy, leading to supply shortages and command failures. The Russians regrouped, focused on more modest advances in the expectation that over time they would break the Ukrainian forces and occupy, if not all of Ukraine, then at least a substantial amount of it. 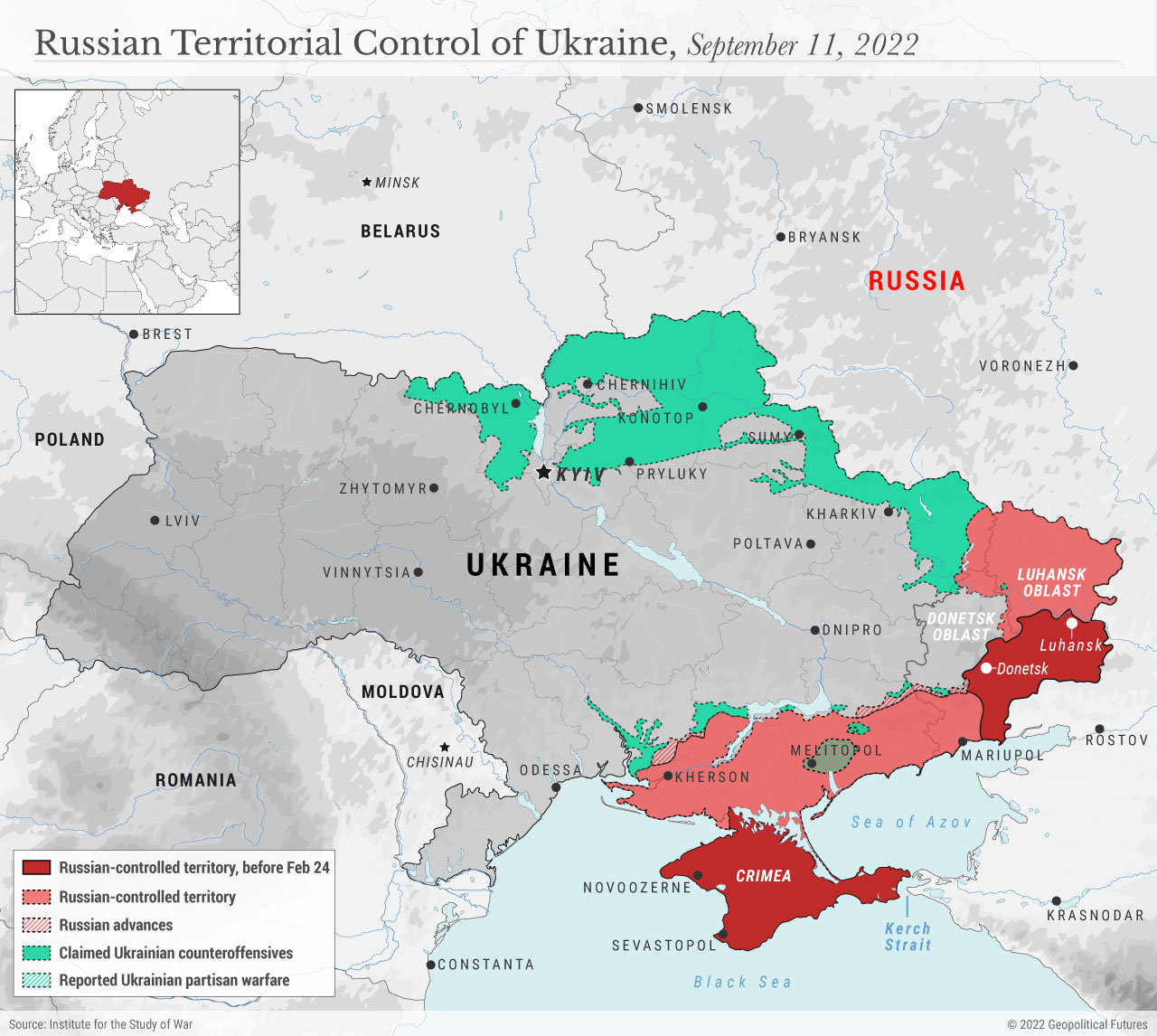 The Ukrainians didn’t break. Wars are fought by soldiers, but they are also fought with weapons and intelligence. Even brave soldiers would fail without these and other material. This is where the Russians experienced their own intelligence failure. They knew that the U.S. had the capacity to deploy world-class weapons but believed the deployment would take time. So it had to be a short war, and when they failed to gain a quick victory, the Ukrainians were armed with an extraordinary array of state-of-the-art weapons, delivered in expanding type and number, with losses replaced.

The United States bought time for the Ukrainian army to evolve from the light infantry force that started the war into an army resembling, in many ways, a great power. Anti-air systems forced the Russians to exercise caution, anti-armor systems caused them to focus on infantry movement, and American artillery meant the Ukrainians could win artillery duels. Russian President Vladimir Putin on several occasions said that the war was not against Ukraine but against the United States. In a real sense he was right, even though he meant it only as propaganda.


All of this is both true and misleading. The war is not over, and Ukraine has not won, although recent advances are significant. No one would have believed that Ukraine could survive the Russian onslaught in the first months. But it did. The Russians reorganized their command structure, introduced superior armor and imposed harsh discipline on their troops. They paid a staggering price, but in time, they redefined the war.

They must now regain their balance. On one hand, they are in far better condition than in 1941. Outright defeat is very unlikely, and they can choose the time and place to attack from a large menu. On the other hand, they are in much worse shape. They are not in a life or death struggle against a monstrous enemy. The troops are not defending their wives and parents from unspeakable fates. The soldiers are not consigned to their own deaths. But it can sometimes destroy an army to fight for ends that are not personal to the soldiers. Throwing away their rifles is not an affront to their families.

The Russians are nevertheless fighting with all of this in mind. They are not simply fighting to postpone the inevitable because the longer a war lasts, the greater the price leaders pay. Putin cannot afford to lose this war, nor can the many others who helped plan it. So before celebrating, the Ukrainians and Americans must calculate their next move, assuming that Russia’s next move is to collapse or capitulate, both of which are unlikely.

One thing the Russians may be counting on is a very cold winter in Europe, which could lead to a European capitulation. But at this stage of the war that doesn’t matter much. Europe’s support is heartening but has minimal military meaning. The U.S. and Ukraine will not stop fighting to keep Europe in the war.

Another strategy the Russians might attempt is to ask China for help. But they are already allied with China, and China has made no move to help. China could support only a small contingent in Ukraine, which they would have to supply because of Russian limits. China is also aware of the economic war the U.S. is waging against Russia, and given its own economic condition, China does not want to face that.

A third strategy might be to negotiate peace. But the Russians cannot return to the Russian border with nothing but dead soldiers to show for it. The Ukrainians will not cede part of their country, viewing any settlement as temporary. A negotiation on either side would now be a capitulation.

The fourth strategy is the only one that seems like a real possibility. One side must defeat the other. Neither side can afford the cost of failing such an attack. The Russian advantage is manpower. There are reports from multiple sources, including American ones, of large numbers of Russian troops training in the Russian Far East. The Russians need more troops, so these reports are believable. Russia is not going to defeat an army armed with American weapons with the number of forces it has deployed thus far. The Russians face a choice of attacking with overwhelming force or losing the war. They will choose the former.

The Russians are protected by a political and military reality. The U.S. is not interested in hitting Russia directly, either with conventional or nuclear weapons. Russia can hit back. Neither side wants a direct Russo-American war. Reinforcements can be hit upon crossing into Ukraine, but the Russians will send a vast number of trainees because heavy casualties at every stage is inevitable.

So long as Putin is president, every effort will be made to win, because he cannot afford anything less than victory. And I don’t see any other possible strategies except the manpower one, which I assume will happen very soon or after the winter. It does not seem to me that the current forces deployed by Russia can do more than hold on to some areas. There needs to be reinforcement. Putin may have other strategies, but they are hard to envision.