Once again the United Kingdom and Argentina have started their latest tango over the Falkland Islands, called the Islas Malvinas in Spanish. This week the U.K. commenced regularly held military exercises around the islands. Argentina proceeded to file official complaints over perceived military aggression and to reassert that Buenos Aires is the rightful sovereign of the islands. The exercises will continue through their scheduled completion and then both sides will calm down until it’s time for the next act. 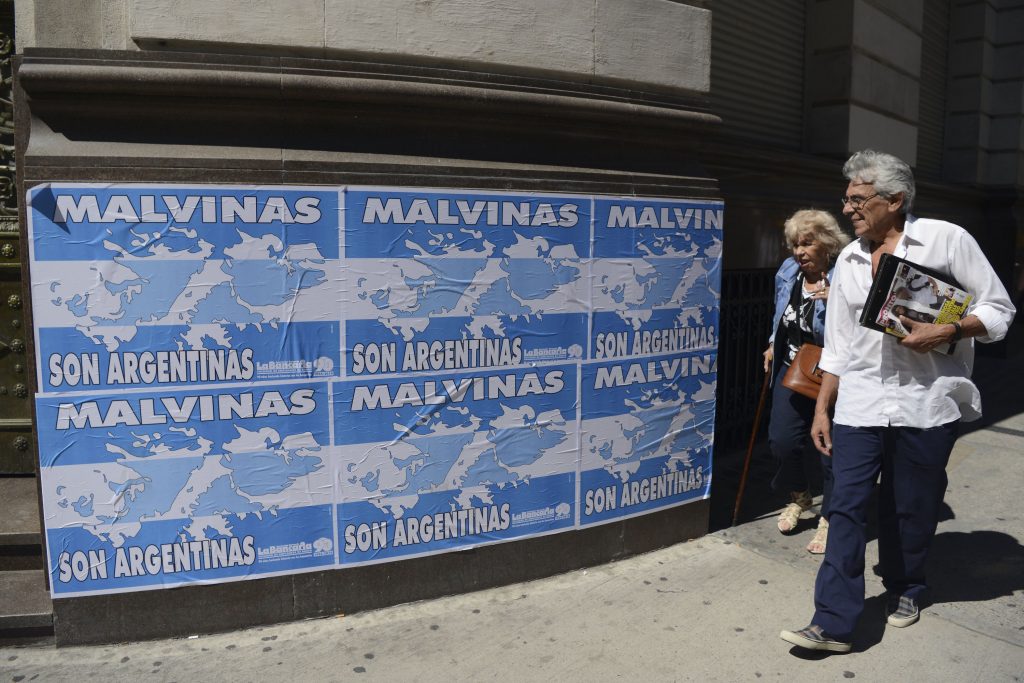 People walk past posters that read “The Malvinas (Falklands Islands) are Argentine” in downtown Buenos Aires on March 31, 2016. The Falkland Islands on March 29 rejected Argentina’s claims that a maritime border judgment by U.N. experts had strengthened its hand against Britain in their dispute over the South Atlantic territory. EITAN ABRAMOVICH/AFP/Getty Images

The political tensions between the two nations have been going on for decades and even escalated into a war in 1982. While brief – it lasted 74 days – the war involved mobilizations of ships, troops and fighter jets from both countries. The islands in question have a surface area of about 4,700 square miles (about the size of Connecticut) and are located nearly 8,000 miles from the U.K. One has to ask, what about these islands is so important that the U.K. regularly holds exercises here and is willing to go to war to keep them under its power?

The U.K. did not fully claim sovereignty over the islands until 1833. Prior to that year, the islands passed through the hands of several countries. After the wars of independence in South America, the British seized the opportunity to lay claim to territory they saw as strategic. At this time the U.K. was in the early years of its imperial century (1815-1914), during which London expanded its territorial reach to unprecedented levels.

Compared to other bodies of water – the Mediterranean, the South China Sea, the Black Sea – the southern part of the Atlantic Ocean appears, on the surface, to be uneventful. Since the 1970s, there have been six major interstate disputes – all over maritime borders and island claims – in the ocean, with the Falkland/Malvinas War the most intense. Of the remaining five, three were resolved through mediation or by international courts and two remain diplomatically contentious.

But the U.K. finds strategic value in maintaining a presence in the South Atlantic. The Falkland/Malvinas Islands provided the U.K. with a stopping point for various maritime routes connecting its territories. These islands were also part of a larger chain of islands that the British claimed in the South Atlantic (Ascension, St. Helena, Tristan da Cunha, South Georgia and South Sandwich) along with some territory in Antarctica. The British navy – and allies with whom it shares a close relationship – can use these islands as refueling stations or for staging military operations, should the need arise. The U.K. insists on keeping the Falklands/Malvinas because they are part of a large strategic hold that expands London’s reach from the North Atlantic well into the South Atlantic.

Over the course of the 20th century, the South Atlantic played a very strategic, though understated, role in some of the world’s major conflicts. During the outset of World War I, the Royal Navy’s victory against Germany’s Pacific Cruiser Squadron at the Battle of the Falkland Islands prevented the German fleet from decimating merchant shipping in the Atlantic as had be done in the Pacific.

In World War II, islands in the South Atlantic – especially the Ascension and St. Helena Islands – were essential for staging anti-submarine missions as German U-boats sank both Allied and neutral merchant and civilian ships in the South Atlantic. During the Cold War, the South Atlantic once again became a vital theater for security as the Soviet presence in West Africa gained strength, especially in places like Angola, and opened the possibility of Soviet power projection into the Atlantic Ocean.

And once again, Africa is gaining the interest of global powers and corporations for its natural resource wealth, untapped investment potential and work force. As competition there grows, the presence of foreign powers along the shorelines could shift balances of power in the region. For example, there have already been rumors about Chinese interest in establishing a military facility near Walvis Bay, Namibia.

Lastly, there is Antarctica. While this continent is currently protected by environmental rules and does not belong to any nation, one must never rule out the long-term possibility of that land and untapped resources being up for grabs. This type of geopolitical thinking and foresight prompts the U.K. to fight for and keep its control over the Falkland/Malvinas Islands.