The British recently finished building two new aircraft carriers, the Queen Elizabeth and the Prince of Wales. Last week, Britain announced that one of the carriers would be based in the Pacific. Obviously, the timing of the announcement had to do with the Chinese actions in Hong Kong. Hong Kong had been a British possession, which under a treaty with China would eventually revert to full Chinese control. China’s repression of Hong Kong is seen as violating guarantees China made concerning the preservation of rights in Hong Kong during the transition, and therefore Britain views that repression as a violation of China’s commitments to Britain. Thus, the decision to base a carrier in the Pacific.

The carriers are nearing the end of their testing, but as the Chinese know as well, building a vessel is a far cry from having an operational aircraft carrier. The carrier must be supplied with aircraft and the crews trained in operations. Supplying a carrier is enormously difficult, as it consumes vast amounts of material during operations. A logistic vessel, carrying huge amounts of everything from fuel to ammunition, must accompany it, and crews must be trained in the fine art of resupply at sea, and potentially while in combat. The new carriers are supposed to be equipped with F-35s, and that means training on that aircraft. Carriers do not sail alone. They are accompanied by vessels equipped with air defense capabilities and with ships to protect against submarines. Operational doctrine must be developed, and staff trained. Having built an aircraft carrier is very different from having an operational carrier battle group, and perhaps the most important part is not the hardware, but a trained captain and crew. China has also built two carriers, and the ships can sail. How close they are to having a combat-capable carrier battle group is as questionable as how close the British are.

The deployment of an aircraft carrier is occasionally a political and not a military matter. The British understanding of the future of Hong Kong has been shredded by China. Britain has both an interest in Hong Kong and an interest in being regarded as a force to be reckoned with. As has been the case for centuries, the act of deploying a warship during a significant dispute is meant to be a signal to the other side that, while no military action is intended, the intention can shift depending on circumstances. More important, it is a signal that disregarding Britain carries with it risks.

In Britain’s case, the decision to build carriers and to base one in the Pacific involves more than Hong Kong or China. The British have, through Brexit, reverted to their historical norm of being part of Europe but distinct from the nations of the European Peninsula. The English Channel, culture and interests divide them.

Ending the relationship with the European Union returns Britain to its prior state, and it was the Royal Navy that guaranteed that prior state and defended British sovereignty against the dangers always incubating on the Continent. Britain is seeking to regain its identity as something other than simply European, and naval force symbolizes that Britain is returning to its foundations. Building aircraft carriers, although discussed for years before Brexit, turned into an adjunct of it. Britain has not only left Europe but returned to itself, a nation with a Royal Navy.

Britain in 2020 is not likely to stand alone against its enemies. It has always sought to meld its naval power with alliances of convenience, and the current circumstances make that essential. It can symbolically threaten China for its actions, but in truth it cannot wage war, nor does it want to. Brexit was part of a process of Britain redefining itself as both a significant power and a dangerous one. The latter is more difficult than the former, and Britain cannot in this sense stand alone. The decision to send a carrier into the Pacific is certainly about Hong Kong, but it is also, as Winston Churchill had to do, drawing Britain closer to the United States.

The United States is in an adversarial position with China. There can be long discussions of relative power, but such discussions ultimately are concluded after the war is fought. Until then all matter of claims on the nature of power can be made. As Colin Powell put it, no war was ever lost because too much force had been deployed on the battlefield. The U.S. has a vast navy and, far more important, a long institutional memory of naval warfare, a memory China lacks. The U.S. also has a strategic advantage. China’s interest is in establishing control over its littoral waters. The U.S. interest is in not controlling the waters but merely denying control by China. The Chinese task is far more ambitious than mere sea lane denial. This is one of the reasons the adversarial relations have not become hostile. The U.S. merely wants to impose risk on China’s use of its waters. China wants to expel the U.S. from the region. The latter is a vastly more ambitious and risky undertaking.

The U.S. operates through alliance systems. NATO has atrophied because the threat to Europe has abated. Another, informal alliance system has emerged. Japan, South Korea, Taiwan, the Philippines (this one is uncertain at times), Indonesia, Australia, Singapore and increasingly India are either formally or informally aligned with the United States, and most have been aligned for decades. China, on the other hand, has no formal allies, and at most has significant cooperation with Cambodia. In other words, where the U.S. force in the Western Pacific ranges from the Aleutians to the Strait of Malacca, the Chinese stand alone, isolated by geography and politics. Although it is strange to speak of a billion and a half people standing alone, that is the practical reality and it weighs on China. 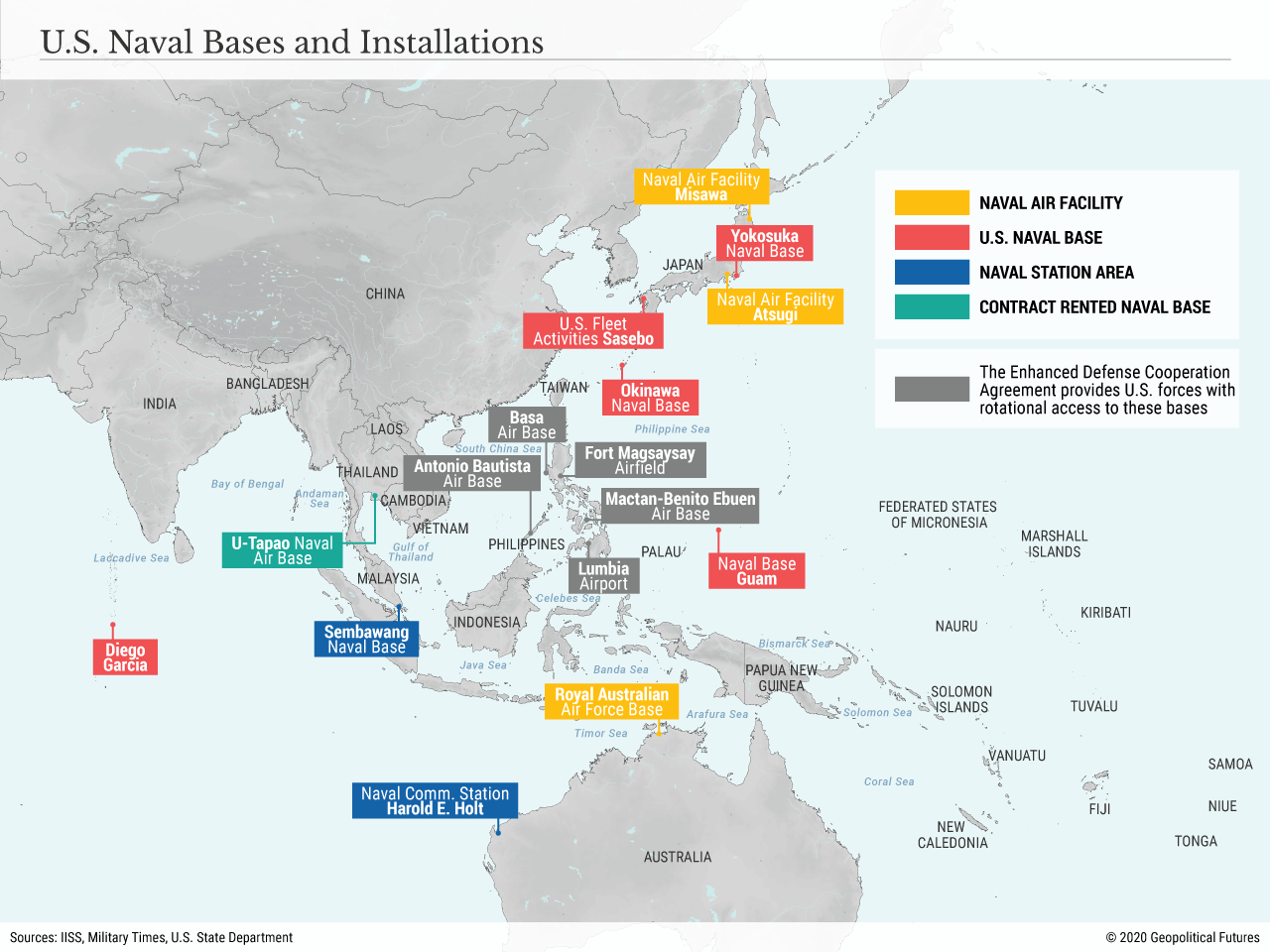 For Britain, making itself part of this coalition does more than simply signal its anger about Hong Kong. It also allows it to pursue its historical goal of a global navy and global allies. At this historical moment, the British can not be first among equals in this alliance, but membership in the alliance will demonstrate that the Royal Navy is global. It shows Britain to be a significant power, if not a superpower, which in turn makes its significance to Europe somewhat greater, even as it leaves the EU.

But there is another critical consideration: Britain’s relation to the United States. British military relations with the U.S. range from close to intimate. Since World War II it has become lopsided. Britain cannot correct the imbalance of power, but it can demonstrate that it is prepared to increase that force, build the most valuable of ships, and send one to join the anti-China coalition in the Pacific. Britain cannot return to its old role of full self-sufficiency, but it can have a close relationship with the alternative to a Brussels-led Europe: the United States. This is of course obvious, but the British also know that coming to the table as a mendicant does not generate American generosity. Bringing carriers to the table and deploying them in a region the U.S. is most concerned with now is significant, no matter how unprepared the carriers are for battle. It increases China’s sense of isolation, and also forces it to consider how far it will go. The British will be able to sit at the American table and expect consideration, and they will get it.

The carriers are not the issue. The issue is what Britain will be now that it has returned to its historical role, and how it will deal with the global interests it still has, including China. And it helps define its relations with the United States, which is next on its menu of things to do, after U.S. politics settle down. The risk is low, but the price is high. Carrier battle groups do not come cheap, nor does the ability to be a global power.

The Battle of Norway