On Aug. 6, 1945, the United States dropped an atomic bomb on Hiroshima. The U.S. remains the only country to have ever used nuclear weapons. As part of our project to review major World War II battles, I will examine the reasoning on both sides that led to the use of this weapon.

The Japanese had entered the war because of the effectiveness of U.S. economic sanctions imposed after the Japanese had invaded Indochina. As an industrial power devoid of its own resources, Japan had to import nearly all of its resources, mostly from Indochina and the Dutch East Indies.

The United States feared that Japan, after dominating the Western Pacific, would soon threaten its interests in the central and eastern Pacific. Japan had treaty agreements with France and the Netherlands guaranteeing shipments of commodities. When both were overrun by Germany, it became uncertain who would control their Pacific colonies, and Japan could not live with that uncertainty. When the U.S. tried to restrict Japan’s access to certain resources in order to limit Japanese expansion, Japan had a choice: It could continue expanding and face war with the United States, or it could allow itself to become completely dependent on the United States for access to minerals.

The United States saw Japan as an international outlaw that needed to be heeled by peaceful sanctions. The Japanese saw the United States as using sanctions to crush Japan’s economy. The result was war.

The United States had two strategic goals. The first was to disrupt Japanese access to Southeast Asia supplies without invading the Dutch East Indies or Indochina. This meant intense submarine warfare. The second goal was to bring itself into range of Japan so that it could conduct a strategic bombing campaign. By 1945, the submarine campaign had dramatically reduced the flow of supplies, and the capture of Saipan and Tinian had brought B-29s within range of Japan.

The Japanese strategy strategic goal in 1945 was to prevent the occupation of the Japanese homeland and retain the existing regime, particularly the position of the emperor. The primary strategy for this was to create a defensive system that would potentially impose unacceptable casualties on the United States.

During the Pacific campaigns, the Japanese had learned that American pre-invasion bombing and bombardment were of limited value. The U.S. succeeded by forcing land battles that had high casualty rates but low casualty totals, relative to other battles in World War II, since these battles were comparatively small. This worked in the Gilberts, the Marianas and the Marshalls. What this proved, however, was that the U.S. would incur a high casualty rate in an invasion of Japan, which would require a substantially larger force.

The U.S. Navy suffered the greatest casualties due to the kamikazes. The Japanese strategy therefore focused on using the kamikazes to attack the Navy and on forcing battles of attrition by layering forces, including civilians, into the interior. Although this imposed catastrophic casualties on the Japanese – estimates say a quarter million died in Okinawa – American troops also suffered severe casualties. 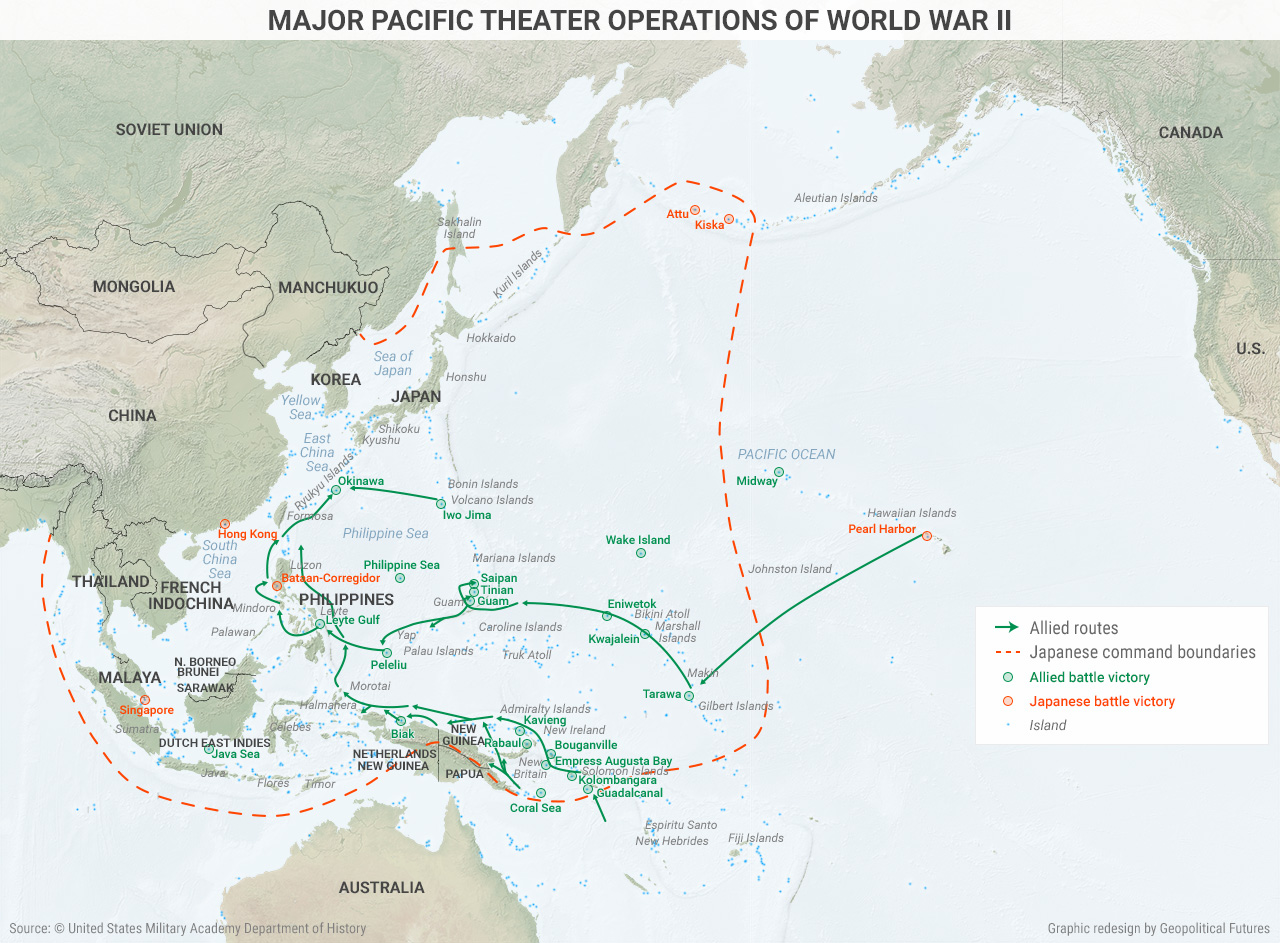 The Japanese were betting on asymmetry of interest. They were fighting for their homeland and for a regime that was far from delegitimized. The Americans were fighting for an increasingly marginal goal – dismantling the Japanese regime. The Japanese believed that the U.S. would give up first and agree to a truce rather than requiring Japan’s unconditional surrender.

This was a reasonable assumption given that the United States’ most experienced troops were already exhausted from war in North Africa, Italy, France and Germany, and its most seasoned Marines had been fighting since Guadalcanal. If the U.S. did invade Japan, the troops that would be sent were the draftees from 1944 and 1945 who were inexperienced and not yet blooded. Instead, the U.S. hoped that bombing and submarine warfare would have forced capitulation.

It hadn’t. Most cities were devastated, and the condition of the economy had reduced the country to penury. But the Japanese wouldn’t capitulate. While they did send out peace feelers, they didn’t include an offer to surrender – merely an offer to negotiate a settlement. The agreement among the Allies was that only unconditional surrender was acceptable, since the U.S. did not want a repeat of Versailles after World War I. They wanted to end Japanese expansion, and a prolonged negotiation would have exacerbated the ongoing bloodshed in China. Besides, Japan had already lost credibility with respect to peace negotiations, as it had previously been engaged in such talks while its fleet was preparing for Pearl Harbor. The argument for a negotiated settlement was not nearly as obvious then as it is now.

Still, the U.S. was caught in a bind. It couldn’t afford the potential costs of invading, and it also couldn’t accept anything less than total capitulation, which the Japanese weren’t willing to offer. It was this strategic situation that led to the use of atomic bombs. The atomic project was driven by German scientists and those who feared that Germany would develop a nuclear weapon. But the Germans didn’t have the resources necessary to both define the concept and create the weapon; only the U.S. was capable of such a massive undertaking during the war. But the Americans were unaware of the limitations of the German program and therefore launched the Manhattan Project, the U.S program to develop an atomic bomb.

Years later, some would argue that the United States dropped the bomb to frighten the Soviets or keep them out of Japan. But the Soviets couldn’t have invaded Japan anyway; they lacked the capability to send a massive number of troops there. The Soviets, moreover, already knew about the bomb, although the U.S. didn’t realize that at the time. If the U.S. wanted to impress the Soviets, it had many ways to do it that didn’t involve bombing Hiroshima and Nagasaki. 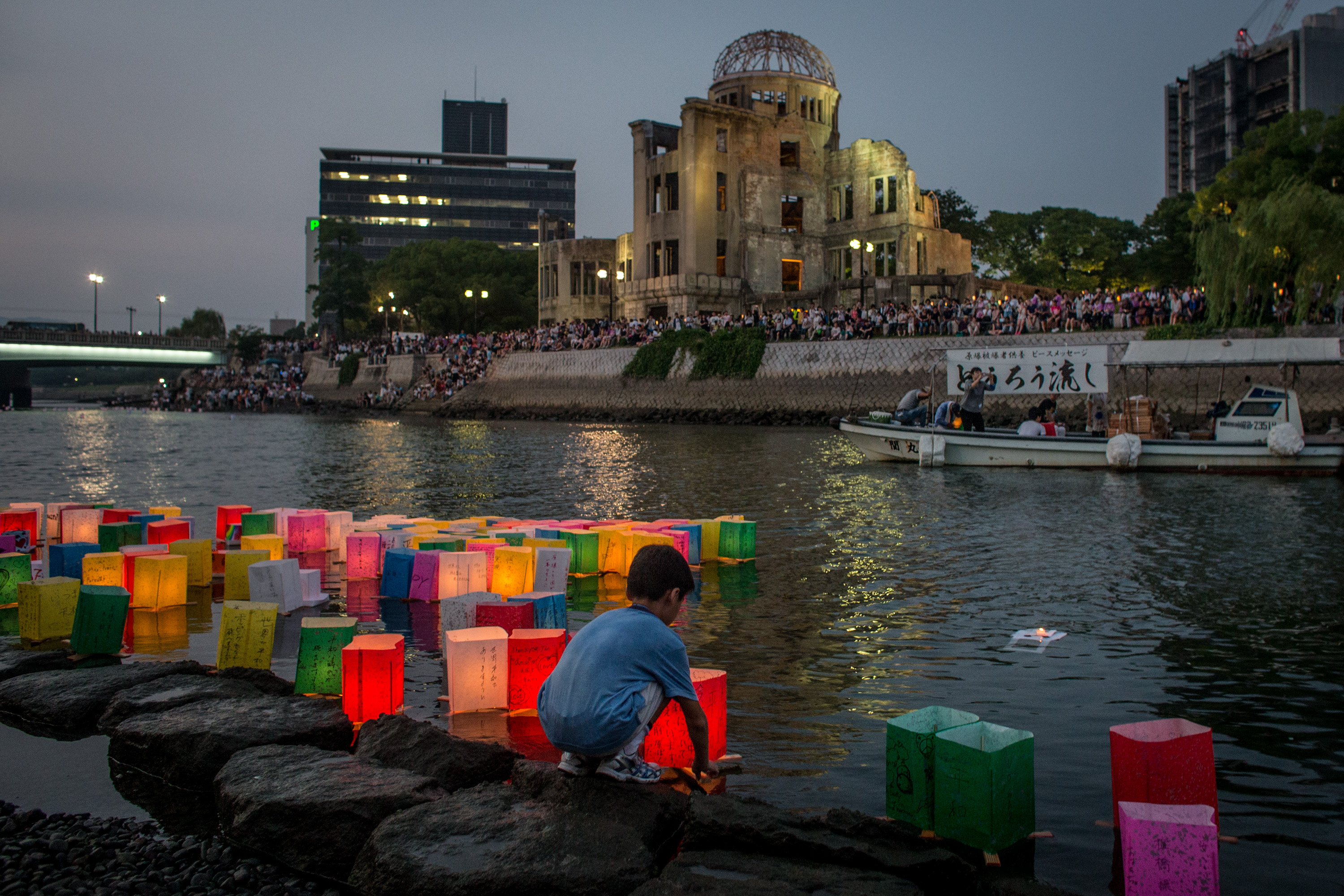 A boy floats a candle-lit paper lantern on the river in front of the Atomic Bomb Dome during 70th anniversary activities, commemorating the atomic bombing of Hiroshima on Aug. 6, 2015. Photo by Chris McGrath/Getty Images

The first test of the bomb took place in July 1945, in the midst of the American strategic conundrum. Would the country accept the cost of occupying Japan when it would turn out that there was a potential alternative to massive American casualties? It’s unclear what Harry Truman would have done if the bomb wasn’t an option, but he would have been pilloried had he invaded or had he not. The country, the troops included, was tired of war and wasn’t willing to pay the cost of invasion. But a peace treaty that allowed the Japanese regime to stay intact would have left the fundamental issues that started the war unsettled. This is not an argument as to which side was more just. It is simply to say that a peace treaty wouldn’t have been a conclusive end to the war.

But the atomic bomb presented another potential scenario. Although Japanese cities had faced devastating attacks before, this threat was different because a single bomb could do the damage of a thousand. Moreover, the extent of the casualties from an atomic bomb was still unclear, in part due to the uncertainty of injury caused by nuclear fallout. But the Americans were focused on the psychological effect it would have. While the Bombing of Tokyo had a devastating impact, the means of death was not a mystery.

The atomic bomb worked terrible magic. The suddenness and totality of the strike created a unique sense of helplessness. It was instantaneous, and it came from nowhere. There were some in the pro-war faction who argued that the bomb used on Hiroshima was simply another massive air attack and not a new weapon. The deaths and destruction were, from their point of view, bearable because it was part of a known pattern.

They refused to surrender. Some even attempted a coup, which came close to success. But for some leaders, Hiroshima immediately tipped the balance to surrender. But capitulation only came after Nagasaki and after the U.S. acknowledged that the emperor would remain as a figurehead, causing him to shift his position.

Ultimately, the atomic bomb ended the war, partly because of the psychological shock and partly because Japan realized that the bomb could be used against Japanese defensive forces massed to face a potential invasion. We can only speculate how many American casualties or how many more Chinese casualties this move prevented.

Eight other nations have acquired nuclear weapons: the United Kingdom, the Soviet Union, France, China, Israel, India, Pakistan and South Africa. (South Africa has subsequently given up these weapons.) North Korea has developed nuclear devices but it’s unclear whether it has a deliverable nuclear weapon. None of these countries has used their weapons, though some have found themselves in circumstances where using them would have made sense. Some, particularly Mao’s China, raved about what they would do with nuclear weapons once they had them. But they didn’t end up doing what they said they would do. In a sense, they aren’t weapons designed to fight armies. (Tactical nukes might be an exception, although they have also not been used.) They seem to have a sobering effect.

The question today is whether the magic of these weapons might sober North Korea or Iran. Some argue that it would sober North Korea, the more immediate and more important case. Human history, and specifically the 20th century, are filled with nations that committed acts of political depravity – but not, even in the case of Stalin or Mao, nuclear depravity. The problem is that it’s hard to build a national policy on the assumption that nuclear weapons moderate the depraved.

In making the decision to use a nuclear weapon, the U.S. faced some tough choices. It had to balance its moral responsibility to American troops and those who were still being slaughtered by the Japanese against the lives of those who would be killed in a nuclear attack. But the idea that Japan was ready to surrender is a myth. It was ready to negotiate a peace deal; it wouldn’t accept unconditional surrender. This could have opened the door to another war, allowing the slaughter of Americans who had already fought and survived a long war.

But it did deeply sober the United States. It opened an abyss the U.S. and all the other nuclear powers looked into and recoiled from. Their use may well have prevented a global nuclear war between the U.S. and the Soviet Union. But will the sobering effect of nuclear weapons extend to other countries like North Korea? Or will a nuclear North Korea embrace the abyss? This is not a geopolitical question as much as a psychological one.

Editor’s note: An earlier version of this report misstated the date Hiroshima was bombed. We apologize for the error.

North Korea and the Threat of ICBMs