Now that the Islamic State has been forced out of Mosul, Iraq’s Sunnis and historical leaders appear to be coming out of the shadows. Iraqi Sunni leaders held a conference July 15 in Baghdad to discuss the future of their community. Attendees included political blocs, tribal chiefs, lawmakers, ministers and governors. Predictably, the Shiite political forces that dominate the government were concerned about the gathering. What is more significant, however, is that the meeting laid bare the divisions within the Iraqi Sunni community.

The incoherence of the Sunni Arabs, the majority population of the Middle East, is at the heart of the region’s chaos. Their rifts have only widened since the 2011 uprisings in the region and made space for the emergence of groups like the Islamic State. So long as Sunni Arabs are at odds with one another, the Middle East will be in conflict.

Ever since the British created Iraq as a sovereign state in 1920, Sunni Arabs have dominated it. First came the Hashemite monarchy, which was overthrown in 1958 and replaced with a republican regime dominated by the Baath Party and the military. Even though Shiites make up the majority of the population in Iraq, this Sunni-led system was able to survive because it suppressed religious politics of all kinds until 2003. The old order came tumbling down when the U.S. overthrew the Baath Party and Saddam Hussein.

Iraq’s Shiites and Kurds rose up in place of Saddam’s fallen regime to assume control of the new democratic order that Washington sought to build. Sunnis initially resisted the new republic, but the resistance was divided and collapsed upon itself. No longer united under the Baath Party, the Sunnis split along tribal, ideological and partisan lines. The discord allowed the Shiites to consolidate power, but another group benefited just as much: jihadists. Over time, jihadists grew in strength and in number to become the most potent force among Iraq’s Sunnis. 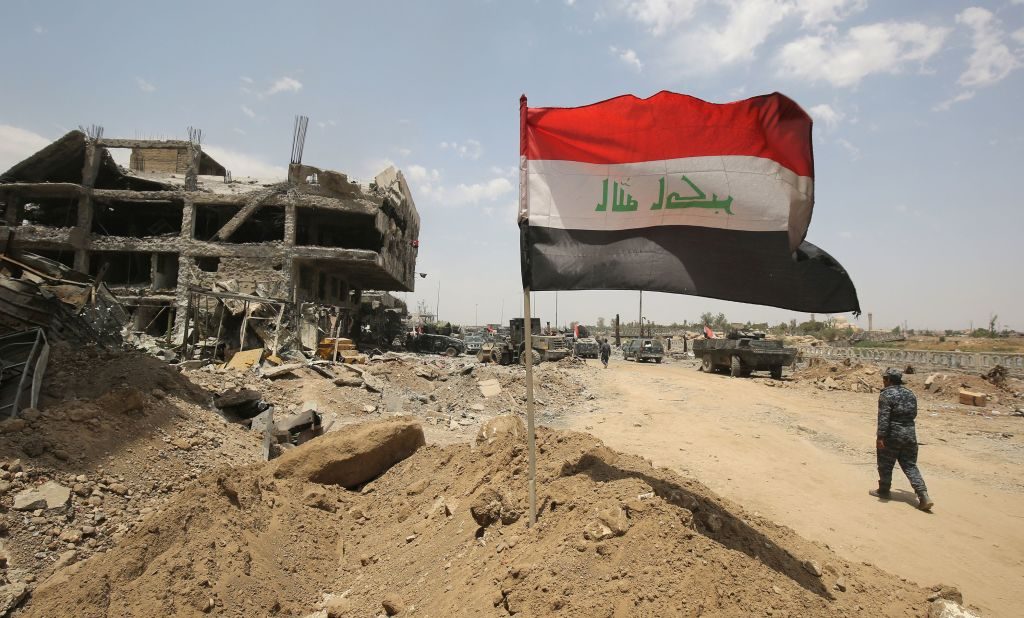 A member of the Iraqi federal police walks past his country’s national flag put up in celebration in the Old City of Mosul on July 8, 2017. AHMAD AL-RUBAYE/AFP/Getty Images

The jihadists were actually helped by the fact that the Shiites exploited the Iraqi Sunnis’ internal differences. Some Sunnis joined the Shiite-dominated political system, while others opposed it. Shiite efforts to marginalize the Sunnis undermined mainstream forces within the community. The predecessors to IS filled the vacuum, and the transnational caliphate project gained appeal among the Sunnis, pushing out the traditional political forces that were still hoping to be a part of the Iraqi national government.

The conditions were similar in Syria when popular uprising gave way to civil war. The rebels were mostly Sunnis but were deeply divided in every way except in their desire to topple Bashar Assad’s government. But an aspect of Syrian Sunni division that doesn’t receive much attention is that a significant number of Sunnis have not just refused to join the rebellion – they still support the Assad regime. This regime is dominated by the minority Alawite community, an offshoot of Shiism.

Three years later, IS has been pushed out of Mosul and driven back into its rural desert habitat. This isn’t the first time the jihadists in Iraq were weakened, and yet they keep coming back – usually stronger. That’s because the social, political and economic conditions that allowed IS to emerge in the first place have not improved.

In fact, those conditions are poised to get worse. The Middle East’s religious and ethnic sects are growing ever more polarized. The cost of liberating Mosul has been that, for the first time in Iraq’s history, the mostly Sunni city is under the control of a mostly Shiite military force. It is only a matter of time before the Sunnis’ disdain for the Islamic State is redirected toward the Shiites who now occupy territory that has historically been theirs.

The Shiite-Sunni rivalry does a good job of explaining why Iraq, Syria and the wider region have an Islamic State problem. But the Shiite-Sunni struggle itself is the direct result of the Sunnis’ own divisions. After all, the Shiites are a minority in the Arab world. The only way the Shiites – led by an ethnically Persian power, Iran – could enhance their geopolitical fortunes is if the Sunni Arabs were weak and divided. They have been for a long time now, and it’s nearing a breaking point.

There is no Sunni Arab center of gravity. Saudi Arabia, the wealthiest player, is trying to offer leadership. But its source of power is being drained every day that the price of oil, the lifeblood of its economy, is low. Even if that was not the case, the Saudis have historically relied on the United States to guarantee their national security. How could they provide for regional security and protect Sunni Arab interests if they cannot protect themselves? The Saudi-led war in Yemen is a prominent example of Riyadh’s inability to impose order in its own backyard. But perhaps the most glaring example is Qatar, a tiny Gulf Arab state that refuses to subordinate itself to Saudi Arabia’s strategy for the region.

Egypt is the other major Sunni Arab power. It has a far more robust state than Saudi Arabia and a formidable military. But Egypt’s economy is weak, and it actually depends on the Saudis and its other rich Gulf Arab allies.

The greater problem, however, is that these states don’t offer a viable political-economic model for the Sunni Arab world. It is this poverty of thought that has allowed IS to sell its caliphate model to many Sunni Arabs in the region, a clear majority of whom are youths. Though its fighting force is on the defensive right now, IS will resurrect itself in some shape or form. All the while the Sunni Arab world – the Islamic State’s major base of fighters and support and the one force that could overwhelm the group’s ideology – will fail to move beyond antiquated religious-leaning monarchies and secular republican regimes.