Earlier this week, on Nov. 30, we identified a shift from the old liberal-conservative model to an internationalist-nationalist model. This new model is predicated on the European, American and Russian experience in and response to World War II. Despite its name, the war did not reach all corners of globe. No major battles or military campaigns took place in South America. Given that South America’s experience in World War II was drastically different than that of Europe, Asia, North Africa, Russia and the United States, it should come as no surprise that the region’s reaction to the aftermath of the Second World War would also remain unique. South America did not fully experience the dangers of nationalism the way Europe did leading up to and during World War II. While internationalism became a moral imperative for Europe, and to a lesser degree the U.S. and others, it still remained a question of national strategy for South America.

Compared to the rest of the world, South America remained largely on the sidelines and unscathed from the battles and devastation of World War II. The region remained largely neutral throughout the war and many countries held out until the last few months to declare themselves with the Allies. Brazil was the most active of South American countries due largely to German U-boats sinking Brazilian vessels. It sent a small number of troops to Italy in 1944 and collaborated with the U.S. in securing Mid- and South Atlantic waters. Colombia and Ecuador also cooperated with the U.S. The former served strategic interests due to its proximity to the Panama Canal and the latter provided the U.S. military with a base on an island in the Pacific. 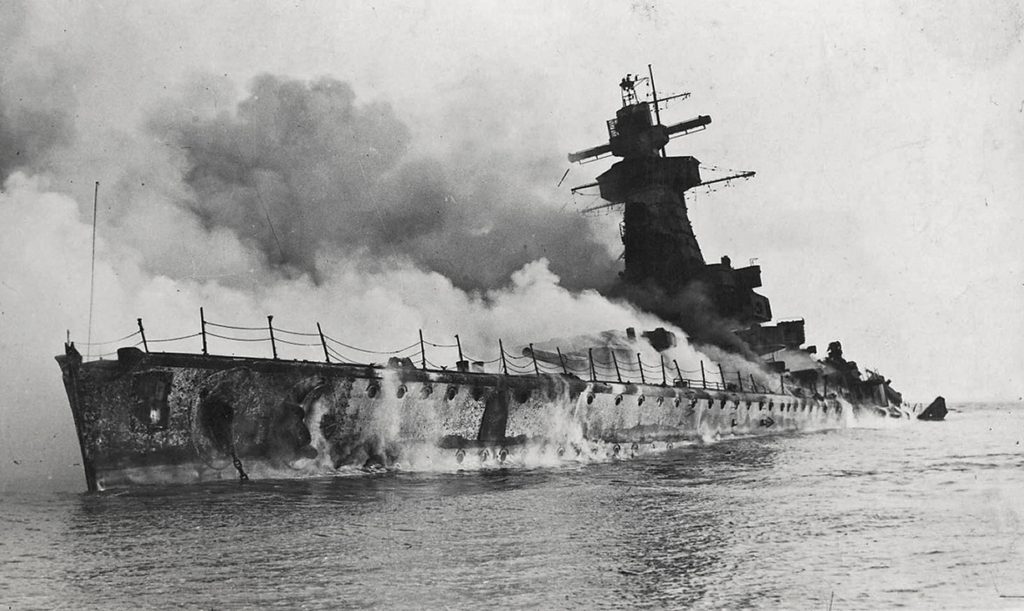 German pocket battleship Adm. Graf Spee burns before sinking on Dec. 17, 1939 near Montevideo, Uruguay. The 12,000-ton vessel was scuttled off the port of Montevideo after battle with British cruisers. STR/AFP/Getty Images

South America has a fundamentally different relationship with interstate warfare than Europe. Interstate warfare has been absent in South America for over 80 years, while in Europe it has historically been commonplace. Demographics and geography explain why. Roughly 739 million people live in 50 countries in Europe, which cover 3.93 million square miles. Natural barriers do not always demarcate nation-state borders in Europe, and some countries, such as Poland, remain extremely vulnerable to invasion due to broad plains. In contrast, South America’s 422.5 million inhabitants are spread among 12 countries that occupy a landmass more than double Europe’s, at 8.89 million square miles. Natural barriers – such as the Andes, desert, swamplands and rainforest – coincide with nation-state borders, helping further protect countries from invasion. As a result, nationalism in South America was not scorned in the same way it was in post-World War II Europe.

Europe is a much older continent than South America. For centuries, warfare and conquests have retaken lands and redrawn borders many times. Historically, war in Europe lasts for several years; the same conflict often recurs and on a scale that devastates the countries. Meanwhile, South America arguably only experienced two interstate wars of this proportion – a series of wars of independence and the War of the Triple Alliance. The few interstate conflicts that have occurred since then did not escalate to such a scale and lasted a few weeks to a few months. Also, the points of conflict did not reach major population centers.

In addition, the notion of increased integration – especially economic integration – has not always been beneficial for South America. The region was and still is viewed as a major source of natural resources. Since colonial times much of the trade activity consisted of the region exporting raw materials to more industrialized nations and serving as markets for future manufactured goods. These trade routes flowed predominantly North-South. This framework proved to be detrimental to the economic development of countries in this region, and continuing it was not in the region’s best interest. This also is one of the main impetuses behind the introduction of and experiments with import substitution schemes in the 20th century and to a lesser extent now.

As globalization took hold in the latter half of the 20th century, countries in the region began to realize that they needed to participate in order to not be left out of the global system. Countries began to rethink their strategies as they related to integration. The region had to overcome two major obstacles. First, it needed to create economies and markets large enough to compete with the U.S., Russia and Europe. To create this power in numbers, countries in the region began to revisit the idea of integration and found it to be potentially beneficial at the regional level. Trade groups like Mercosur and the Pacific Alliance not only opened regional markets but also gave members the ability to bring market size and weight to future trade deals.

Integration beyond the regional level and related to global affairs is not something that, on the whole, naturally happens in South America. The region’s perspective for viewing the rest of the world, in some ways, can be described as an outsider looking in. It is essentially a gigantic island floating between the South Pacific and Atlantic oceans, barely connected to the north by the isthmus of Panama, which is not passable by land. It is physically removed from major trade routes in the Northern Hemisphere and isolated from Europe and Asia. While the ramifications of major geopolitical events affect the global system, South America’s physical separation from major centers of gravity in the world have kept it naturally isolated to a certain degree.

As noted, the North finds itself in the first phase of the nationalist-internationalist battle and neither side knows exactly how to proceed. But how this battle plays out in the North will be markedly different from South America’s reaction to a new model. Integration is used still as a strategic political tool in South America, rather than a moral imperative. Nationalism exists in South America, but without the strong negative connotations that existed in Europe in the aftermath of World War II. This fundamentally different relationship between nationalism and integration in South America is the foundation for the region’s distinct response.