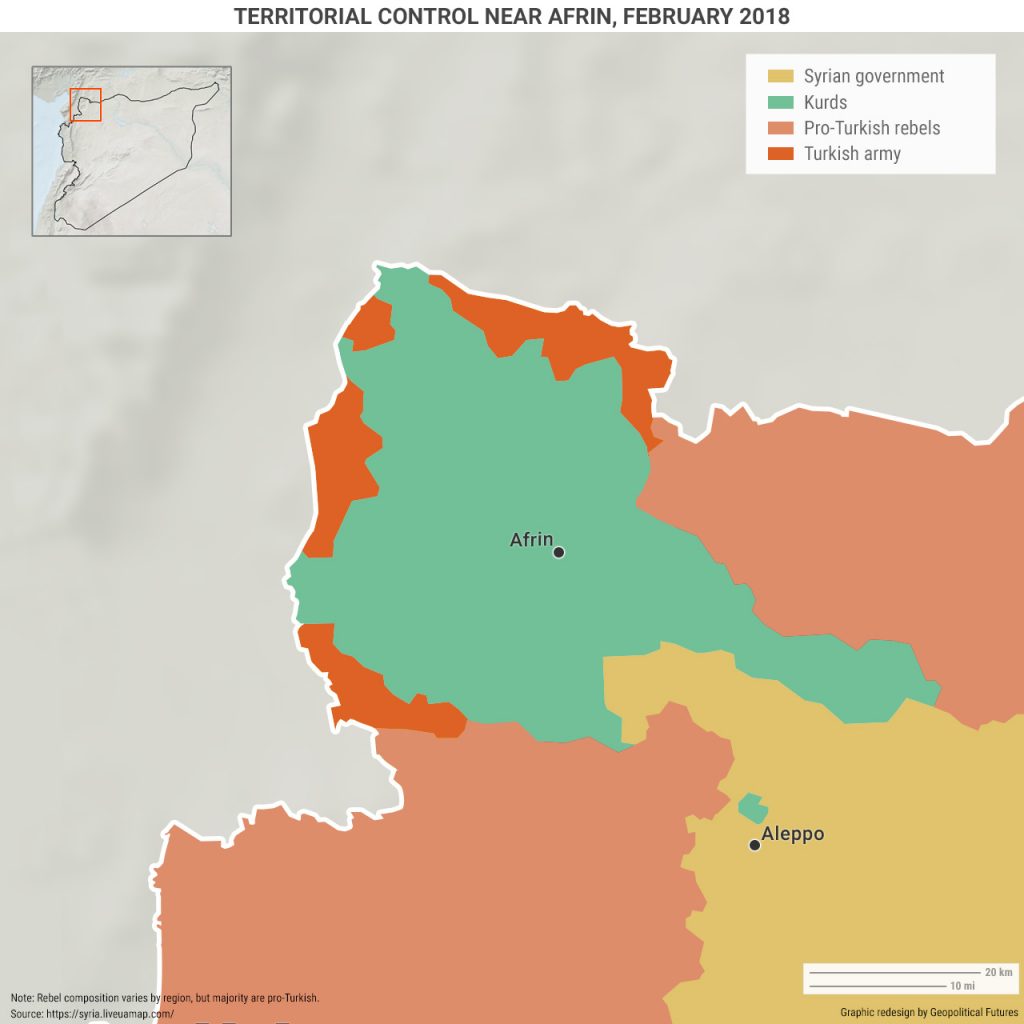 With Turkey joining the fray in Afrin and inching closer to Aleppo, a critical city over which Syrian forces have already fought a bloody battle, Bashar Assad has a choice: either escalate his military conflict with Turkey and its proxies, or come to a settlement. To win a military victory in the region, Assad would need to move his forces along the southern edge of Afrin until they reach the Turkish border in the west and then turn farther south until pro-Turkish forces in Idlib – a region largely controlled by another Turkish proxy, Hayat Tahrir al-Sham – are surrounded. Assad will try to encircle Turkish proxies in Idlib and cut off their supply routes to Turkey.

From the regime’s perspective, therefore, working with the Kurds makes sense. It can use the 8,000-10,000 Kurdish fighters from the People’s Protection Units, or YPG, in Afrin to repel the Turkish invasion and avoid expending its own resources. It also makes sense for the Kurds, who are facing a Turkish assault with few allies, since the U.S. has said it will not support the YPG in Afrin.

But Turkey has its own plans to surround the YPG and cut off access to its allies. On Feb. 20, Erdogan announced that the Turkish military will in the next several days attempt to envelop Afrin, blocking the YPG from receiving support from pro-Assad forces. Turkey and Assad are therefore applying the same strategy to different regions, while trying to avoid a confrontation that could draw in more outside powers and escalate the conflict.

This situation could give rise to a tactical settlement in Afrin. Faced with the risk of a far bloodier battle than it anticipated, Turkey may be willing to halt its advance if the Syrian regime – and by extension, Iran and Russia – agrees to move the Kurds out of Afrin and Manbij to an area east of the Euphrates, and if it could also guarantee to control the Kurds’ actions thereafter. The Syrian government could then take control of areas that have been held by semi-autonomous Kurdish entities for several years. The Syrian Kurds might also agree to this arrangement – it would allow them to avoid even more bloodshed, and they could negotiate a role for themselves in the Syrian government. Iran, an Assad ally, might also accept an agreement because it would reverse Turkey’s advance east. Such a settlement wouldn’t end the Syrian war, but it would help temper the conflict in Afrin.