The notion that the best defense is a good offense is gaining traction among Japanese decision-makers. On Aug. 4, newly appointed Defense Minister Itsunori Onodera said Tokyo would begin considering whether to allow its military to carry out pre-emptive strikes against overseas targets. Such a move would be a substantial reinterpretation of Japan’s post-World War II defense policy, which has generally abided by constitutional stipulations limiting the use of force to self-defense. Prime Minister Shinzo Abe quickly walked this back, saying he had no plans to consider the issue. Japan’s 2017 Defense White Paper, released the following day, made no mention of such a policy shift. But Abe did note that escalating threats from China and North Korea have made Japanese defense guidelines effectively obsolete — a sentiment echoed in the white paper.

Despite Abe’s dismissal of the issue, there’s enough smoke around pre-emptive strikes to suggest that Tokyo is taking the possibility seriously. In March, a research commission (of which Onodera was a member) set up by the ruling Liberal Democratic Party called for Japan to arm itself with long-range weapons to address the growing threat from North Korea. In May, following a visit to the Pentagon, Onodera said Washington had given Tokyo tacit approval to do so. Shortly thereafter, several reports alleged that Abe’s government was in discussions to buy Tomahawk cruise missiles from the U.S., potentially giving Japan the capability to pre-emptively disrupt a North Korean missile launch.

Japan has a fundamental desire and ability to project power and to give its military freer rein to operate abroad. A push for the Tomahawks would show how the emerging crisis on the Korean Peninsula is creating a sense of urgency in Tokyo to do so. But at the same time, Abe’s apparent unease with saying so publicly underscores the stiff domestic political currents that will, at least for now, keep Japan’s drive for a modern military from moving too fast. 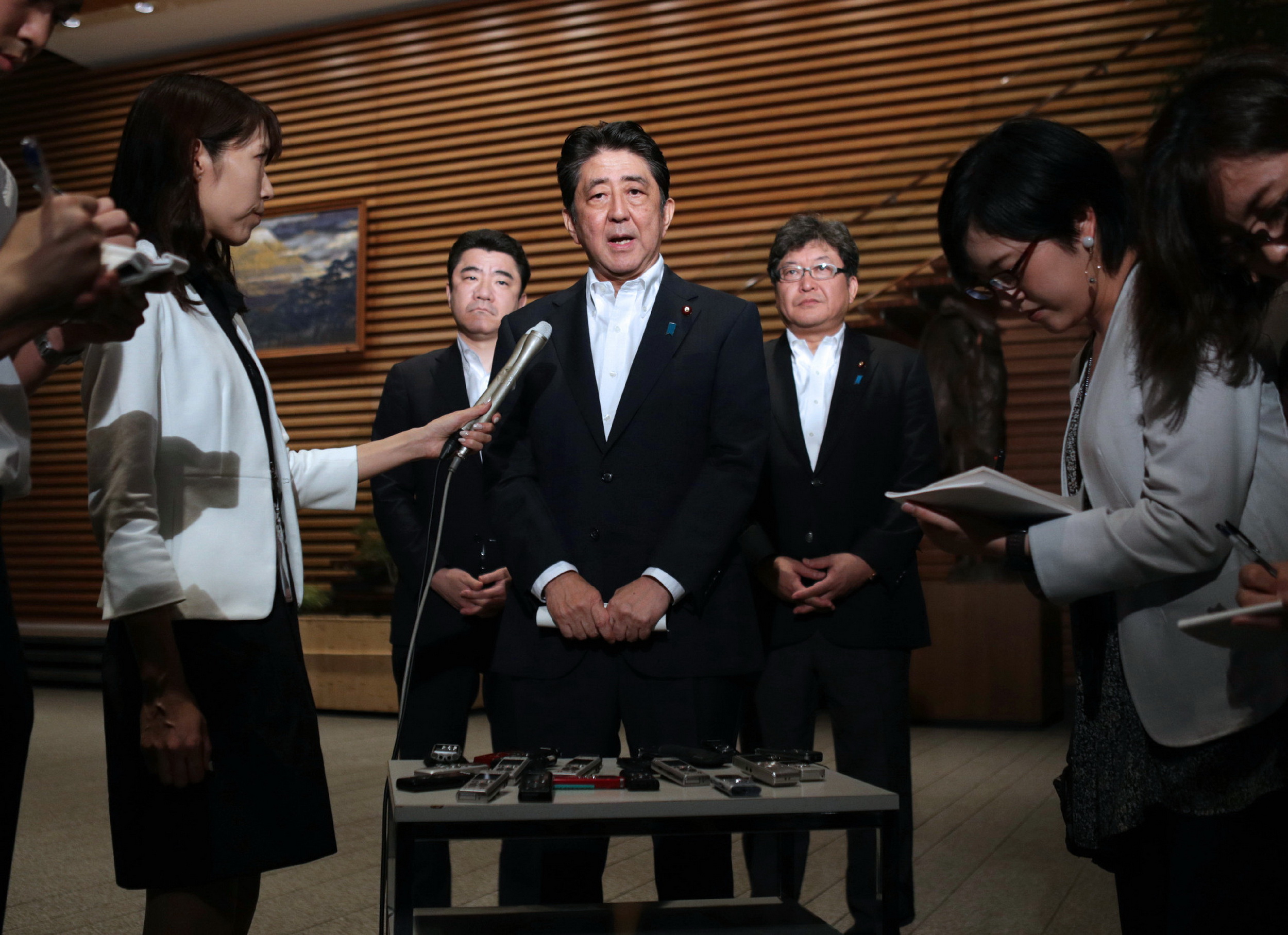 Japan has been toeing the line on remilitarization for years. Following World War II, U.S. security guarantees gave Japan room to channel most of its energy into economic development. But they also allowed Japan to build up substantial defensive capabilities, laying the groundwork for a force that could eventually project power. And though Japanese policy still bans offensive weaponry such as long-range bombers or missiles, many of Japan’s recent procurements are capable of playing more than purely defensive roles.

In 2008, for example, Japan began procuring a fleet of aerial refueling tankers, signaling an interest in longer-range missions. The Izumo-class helicopter carrier it launched in 2013, which is seen as a possible precursor for a future homegrown fixed-wing aircraft carrier, has spent much of this year participating in joint drills with the U.S. and other regional powers far from Japanese waters. Tokyo is reportedly planning to purchase at least three high-altitude long-endurance drones from the U.S., which would give Japan the ability to conduct pro-operational surveillance and post-op damage assessments over foreign airspace — say, as part of a pre-emptive strike across the Sea of Japan.

Under Abe, meanwhile, the government has been methodically working to lay the legal groundwork for a more pronounced break from its pacifist constraints. In 2014, the government approved a reinterpretation of the war-renouncing Article 9 of the Japanese Constitution. This granted the military powers to exercise the right of collective self-defense — essentially allowing Japanese forces to come to the aid of allies under attack during operations deemed necessary for Japanese security. Two contentious security laws implemented in 2016 formalized the reinterpretation and expanded the scope of the type of operations that the Japanese military can support. Abe’s government also removed a ban on weapons exports, indirectly boosting the country’s capacity to produce its own arms.

Japan’s primary motivation for remilitarization stems from China’s ability to threaten it from further afield. Japan must import nearly all the oil and raw materials it requires to function both economically and militarily and, thus, needs open, unfettered access to critical shipping lanes in the East and South China seas. The robust defensive capabilities Japan developed during the latter half of the 20th century may be sufficient to deter an invasion of the homeland, but they cannot secure Japan’s vital lifelines further afield or even eliminate the North Korean threat on its doorstep. For this, Japan relies overwhelmingly on the United States, the dominant naval power in the Pacific, and no nation wants to be fully dependent on another for its core strategic interests.

The U.S. has been cautiously supportive of Japan’s shift in strategic thinking. Over the long term, the U.S. wants its allies to shoulder a greater portion of the burden of regional security, allowing the U.S. to manipulate events from afar without overextending itself.

The U.S. also sees Japanese activities in the Asia-Pacific and Indian Ocean basin as broadly aligned with American interests. Countries that see the U.S. as too distant and prone to distraction to be relied upon in perpetuity find Japan’s vital interest in regional stability reassuring. With governments wary of U.S. power or intentions, Japan can serve as something of a proxy (memories of Japanese imperialism notwithstanding). Japan’s growing maritime security assistance to South China Sea littoral states is illustrative in this regard.

This underscores another, subtler factor in Japan’s strategic thinking — one related to the peculiar mechanics of the U.S.-Japanese defense alliance. While it’s inaccurate to describe Japan as fully free riding on U.S. defense guarantees – its hosting of U.S. military bases remains indispensable to the U.S. extended deterrence posture in the Western Pacific – the alliance is nonetheless heavily imbalanced. Whereas U.S. allies like Australia have routinely participated in U.S. combat operations in distant lands, Japan’s Constitution has allowed it to avoid entangling itself in U.S. engagements abroad without endangering the U.S. security umbrella.

Notably, the white paper released this week included a heavy emphasis on the threat North Korea poses to the U.S. and the benefits of the alliance to the U.S. This reflects a deep-rooted concern in Tokyo that the U.S. may be less inclined to come to Japan’s defense if doing so puts, say, Los Angeles at risk of a North Korean counterstrike. So Japan is developing the ability to project power as a way to both keep the U.S. close and give itself freedom of action if and when U.S. attention strays.

The problem for Japan, then, is that where Article 9 once allowed the country to enjoy U.S. security guarantees without sharing much of the costs, it’s now hindering Japan’s ability to pivot at a time when the need to do so is becoming more acute. The Abe administration wants to amend the constitution to prevent the courts from holding up future efforts to rearm. But this would require public approval in a referendum, and its prospects here remain uncertain.

At this point last year, coming off a landslide victory in general elections and poised to become the longest-serving prime minister in Japanese history, Abe and the LDP appeared to have the political capital to push through Article 9 reforms by the end of 2017. Today, due to a series of scandals and the failure of his economic agenda to live up to its billing, Abe’s approval ratings have sunk into the 30s. Public support for Article 9 reform has dwindled as well. Over the weekend, Abe signaled that his Article 9 push would be delayed until he had support from the opposition.

One scandal, which felled Japan’s last defense minister, centered around allegations of misinformation around Japanese peacekeeping activities in South Sudan — a deployment considered a test of public willingness to support an outbound military. This environment may explain Abe’s hesitancy to openly support Onodera’s pre-emptive strike proposal. It also explains his administration’s rhetorical emphasis on the severity of the threat on Japan’s doorstep.

We tend to downplay the role of domestic politics as a factor shaping the geopolitical landscape. This is because political currents are fickle, and campaign pledges typically give way to the realities that drive the behavior of states and shape the international system. But on shorter timelines — like the windows ahead of a pivotal referendum or a decision on whether to participate in a specific combat operation abroad – domestic political factors have more potential to play a decisive role in geopolitical outcomes. In the Japanese context, even if Tokyo can expand its offensive capabilities without Article 9 reform, public uneasiness with remilitarization is likely to suppress defense spending — currently at roughly 1 percent of GDP annually — and hinder Japan’s ability to lay the groundwork needed to act decisively in a crisis.

Still, Abe is not the first Japanese prime minister to lose the support of his people; his own first stint as prime minister ended after just two years in 2007. And yet Abe has managed to guide Japanese defense policy in the direction he wants to take it anyway. Japan has the technological and industrial base and national cohesion to pivot relatively quickly if and when the public consents to it. The current bout of political instability may slow Japan’s military normalization, but it will not derail it. In the meantime, the North Korean threat has firmly aligned U.S. and Japanese interests and underscored the value of the alliance once again. Somewhat paradoxically, this gives Japan time to come to terms with its emerging geopolitical reality at its own pace.