Japan is a quiet place, at least from a geopolitical standpoint. It makes few political demands on other nations, and no military ones. Article 9 of its constitution forbids it from maintaining any military force. Article 9 has been reinterpreted to mean that it can maintain a substantial military for self-defense, under the principle that self-defense is a natural right, but that force cannot engage in offensive military operations – and it certainly can’t do so unilaterally. Since its banking crisis in the late 1980s and early 1990s, global financial markets have expected that Japan will face a financial crisis that will create domestic upheaval. It hasn’t happened. Instead, Japan grows slowly and sometimes not at all, but compared to much of the rest of the world, it is seemingly at peace with itself.

It has not always been this way. In the first half of the 20th century, Japan sought to take control of the Western Pacific and China. It had defeated the Russian navy in 1905, and then challenged the United States and European powers in the Pacific. It temporarily claimed an empire in China and in the littoral islands of Asia, ranging from Taiwan to the Dutch East Indies to the gates of India. This lasted for only three years, but for the first part of those years it appeared that Japan had permanently reshaped the balance of power in the Pacific and in Asia.

Nor was it a quiet power in the decades leading to its economic crisis. Japan was the China of the 1960s, 1970s and 1980s, paying low wages and enjoying remarkable growth. The Japanese were well educated and experienced in industrial processes, and the process of rebuilding Japan’s economy kicked off a wave of low-cost exports that flooded Western, and particularly American, markets. During the 1980s, this created substantial political crises with Japan, with Americans seeking both to limit Japanese exports and to emulate Japanese management techniques, and the Japanese clinging to free trade principles and hinting that the problem with American workers was that they were lazy. The Japanese surged into American markets, dominating many, until the economics of high exports took their toll on the rate of return on capital. Huge exports and diminishing profits can go hand in hand.

Internally, Japan wasn’t at peace for most of the 20th century either. After World War I, the Japanese army became a political force and sought to control foreign and domestic policy, tied to an ideology that purported to represent the military ideas of historical Japan. Whether that was true or not, Japanese internal politics were poisonous in between the two world wars, with assassinations, coups and threats. It was as far from contemporary Japan as possible.

Japan is remarkable for its ability to change its behavior. It did so after its surrender in 1945 and was thoroughgoing in almost every respect. But this wasn’t the first time it had remade itself. In the 1850s, when Europe and America were probing the country, Japan lacked any powered tools. It was an agrarian society of farmers and craftsmen, with clans waging a perpetual war of all against all while their leaders engaged in endless political maneuvering. Japan seemed ripe for the picking by Western imperialism.

Between 1860 and 1900, Japan transformed itself even more radically than the United States had. It went from being a war-torn agrarian country to a rapidly industrializing one, with a navy that it purchased from Britain and an army trained by Germans. It absorbed the technology and the knowledge of the Europeans to build a navy that defeated the Russians in 1905 and that challenged the world for control of the Pacific. The speed with which Japan industrialized was stunning. Equally stunning was the political shift from barons who ruled themselves to a centralized government under the guardianship of an emperor, who, although considered a descendent of a goddess, was not decisive until industrialization required national unity and a symbol. Politics continued, but the country united, overcoming regional differences sufficiently that a modern national government could be created.

In 1945, Japan underwent its second massive change in less than a century. It shifted from being an aggressive power, politically dominated by the military, to being institutionally opposed to a military-based foreign policy. With the military banished from political life, Japan adopted a liberal democracy.

This is worth repeating. In less than 100 years, Japan went from an economically backward but culturally advanced nation on the edge of the world, to a nation that challenged everyone around it, to a peaceful mercantile state. What is most important here is that for all the changes and all the political friction, it did this without any significant social upheaval.

The Industrial Revolution in England accompanied the decline of power of the nobility and the rise of industrial and commercial power, along with the rise of demands from the masses for social adjustment and political participation. France did the same, with the addition of Maximilien Robespierre’s Reign of Terror. Russian industrialization involved this plus a holocaust. In almost all industrialized nations, industrialization was accompanied by social upheaval. The transition from agrarian feudalism to industrialism came with blood.

Japan is the one major exception. It never underwent a social revolution, despite the speed of its transformation and the massive discontinuities that came with it. In Japan, the nobility became the industrialists and advocates of war. The industries they created continue today to support the policy of mercantilism and increasing domestic consumption – as well as embracing Japanese democracy.

The great Japanese agglomerations, the keiretsu, trace their heritage to nobles in the 19th century who founded businesses. These nobles did not hesitate to engage in commerce as some of Europe’s nobility did. They eased Japan from agrarianism to industrialism, and from feudalism to capitalism.

To be more precise, the Japanese feudal system remained, changing along the way. But in essence, the feudal estates became feudal industries, and the feudal industries treated their workers in many ways as serfs. The workers were supposed to give their loyalty to the company, and in turn, the company was supposed to take care of the worker. In Japan, it was not simply an economic relationship; it was a social relationship of mutual obligation. Japanese workers pride themselves on the prestige of the company they work for, and they work for that company, in many cases, for a lifetime. The industries, in turn, have as a policy retaining workers even in hard times, even at the cost of maximizing profit. But if austerity is needed, the workers share in the austerity. 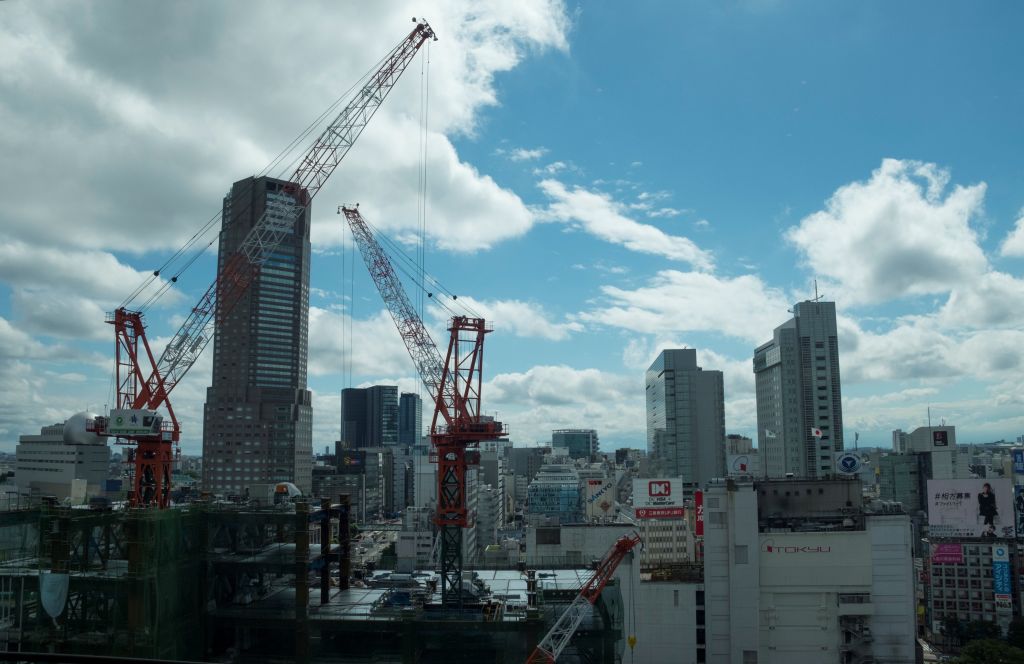 Economists have been surprised at how Japan has avoided collapse, but it is explained at least in part by the fact that there was never a social upheaval in the country. Much of Japan’s national debt is held by the public, in part as savings, in part as duty. Sluggish growth does not translate into ruthless cuts, even if this turns into even more sluggish performance. Imagining Japan as industrialized feudalism – in the full and not pejorative sense – gives us a hint of how it has sustained itself through its dramatic rises and falls.

This isn’t to say that the Japanese are incapable of agitation. There was great agitation in 2011 after the earthquake, tsunami and nuclear leaks. But it was deflected to the state. The Japanese state appears to be a liberal democracy, but it is more complicated than that. The bureaucracy that evolved from the old imperial bureaucracy remains in place and works in concert with other ministries, private banks and other institutions. The democratic institutions serve an important purpose of absorbing the passion of the public on various issues, the ministries of finance and foreign affairs have a hold on what Japan does, and the public accepts their authority. What binds the ministries together are the universities that their personnel graduated from. Japan is a meritocracy with universities informally but rigorous ranked, and the graduates work together throughout their careers. It is what the British civil service used to be.

This has meant three things. First, Japan is able to make sudden shifts as necessity requires, and then remain on a new course for a very long time. Apart from occasional passion, the system has a degree of trust and acceptance not found in Euro-American society. Second, the financial crisis of the 1980s could be navigated without the expected social and political upheaval. Sluggish growth was accepted and even welcomed, since flat growth and a declining population means higher per capita income. And third, the idea that the Japan of today is the one that we will know for the rest of the century is possible but unlikely. It’s as unlikely as the idea in 1860 that Japan would be a major economic power in 50 years, or that it would take Singapore from Britain in 80. It has been 72 years since the end of World War II, and Japan has followed a clearly defined road. Do not assume that another 72 years will pass before it changes.

The United States caused both of Japan’s radical changes. It was the approach of U.S. Adm. Matthew Perry that triggered the frantic industrialization. It was the defeat by the United States in World War II that triggered the shift to mercantile pacifism. That isn’t unreasonable. The U.S. and Japan entered modernity at about the same time. And as they touched, they both feared and fascinated each other. No one had dominated the Pacific in history – it was much too large and empty. But Japan and the United States were both nations built on hubris, on the idea that they were ordained by God and history to rule. In time, it was inevitable that they would wage a desperate war that one – most likely the United States – would win. It was in its way certain that the United States would help resurrect Japan, leaving much of it alone. The Americans had a new enemy, the Soviets, and they wanted Japan to help. Besides, the Americans were always interested in commercial relations.

Japan suffers from the disease bred by industrialism. It needs oil and other industrial minerals that it cannot supply domestically. Those come from far away. Since 1945, Japan has happily relied on the United States to protect Japan’s access to them. Japan prefers this by far. But in this world, relying on any other nation is risky, and without the U.S. keeping open the sea lanes, Japan’s industry grinds to a halt. Facing China, and the persistent danger of North Korea, Japan continues to put its trust in the United States. So once more a change in Japanese direction will depend on the United States. If the U.S. changes interests or falters or becomes hostile, Japan will, with sincere regret, change direction again. It will change with the same national unity that has been its strength ever since its industrial revolution.