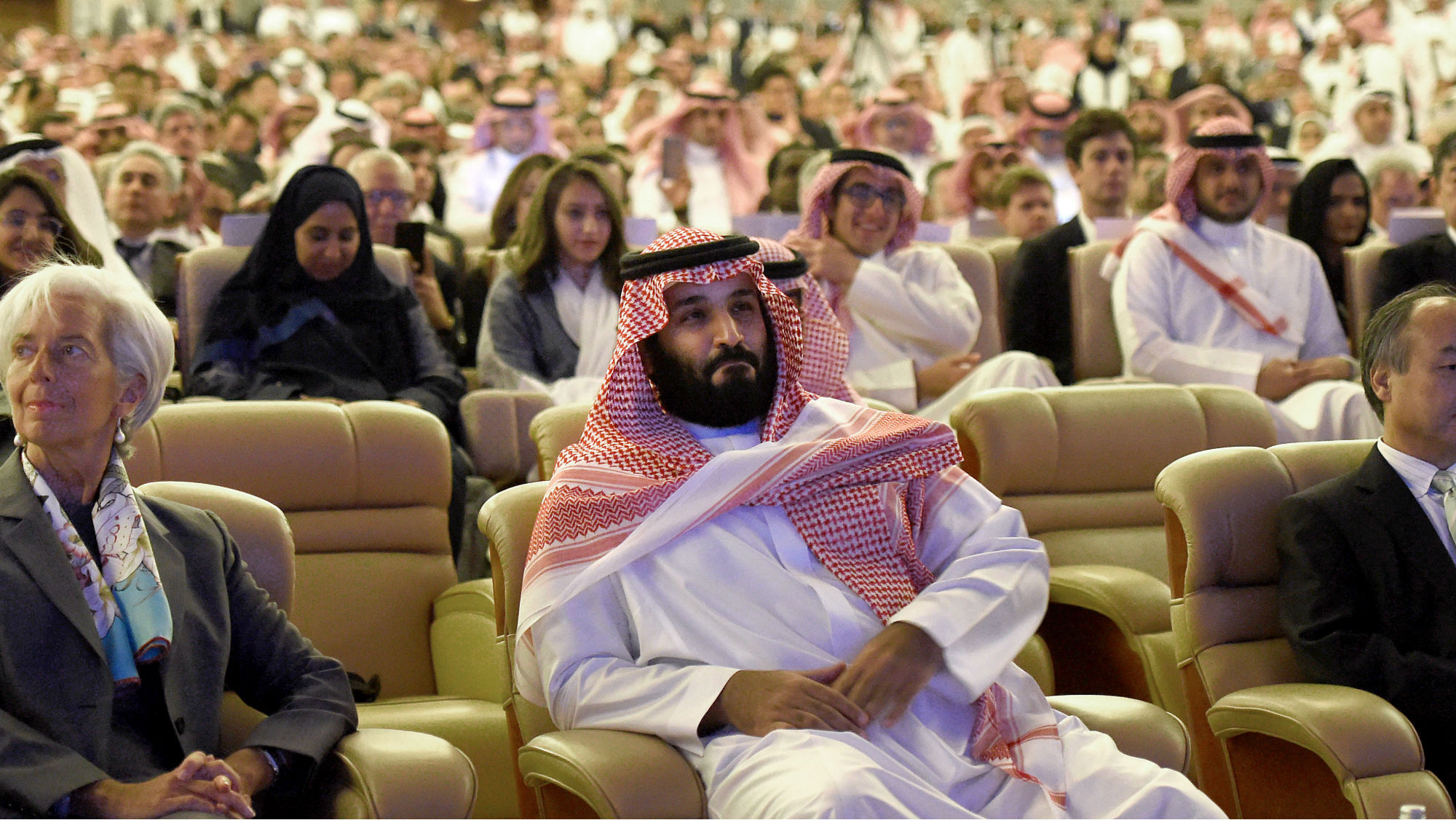 For nearly a century, Saudi Arabia has been ruled by the elders of a royal family that now finds itself effectively controlled by a 32-year-old crown prince, Mohammad bin Salman. He helms the Defense Ministry, he has extravagant plans for economic development, and last week arranged for the arrest of some of the most powerful ministers and princes in the country. A day before the arrests were announced, Houthi tribesmen in Yemen but allied with Iran, Saudi Arabia’s regional rival, fired a ballistic missile at Riyadh. The Saudis claim the missile came from Iran and that its firing might be considered “an act of war.”

Saudi Arabia was for a long time the unchanging, even rigid, center of the region. But things changed after 2008. Saudi Arabia, like Russia, had counted on oil revenue to maintain the stability of the regime. The financial crisis pushed the world into an extended stagnation where even 2 percent growth in gross domestic product was considered a boom. This of course put a cap on industrial production, which ultimately cut the ground out from under oil prices. The increased capacity developed while oil was nearly $100 per barrel – including the stunning transformation of the United States into an oil exporter – also forced prices down. OPEC, Saudi Arabia and Russia all tried (and continue to try) to boost prices using various schemes. The problem was that, whenever production was cut, some producer, desperate for oil revenue, rushed in to a fill the vacuum. This placed the Saudis in a terrible position.

Saudi Arabia was created between the two world wars under British guidance. In the 1920s, a tribe known as the Sauds defeated the Hashemites, effectively annexing the exterior parts of Saudi Arabia they did not yet control. The United Kingdom recognized the Sauds’ claim shortly thereafter. But since then, the Saudi tribe has been torn by ambition, resentment and intrigue. The Saudi royal family has more in common with the Corleones than with a Norman Rockwell painting.

The Saudis maintained their rule partly through financially supporting particular segments of Saudi society. For the House of Saud, cash was a strategic weapon. Spread around prudently, most of it to the royal family but a generous amount to other groups in the kingdom, it bought stability, hiding but never eliminating the malice that was always there. Among the most critical recipients of money were the Wahhabi clerics, the gatekeepers of Saudi Arabia’s ultraconservative brand of Islam. When the Sauds conquered Mecca and Medina, they became the protectors of the holy cities. This was an honor, a singular responsibility and a political burden. The Saudis had to fund the Wahhabis and became trapped by them. The royal family and others knew how to have a good time in London, Paris and other European cities. Some, though not all, clearly didn’t take conservative Islam seriously. But others in the kingdom did, and this became a fault line in Saudi Arabia, one that was buried under money.

Money, however, eventually ran short, and a faction of the royal family began to grasp their vulnerability. Oil on the global market was plentiful, and the United States was less than solicitous of Saudi needs, particularly while the Saudis – the Wahhabi side of the royal family – was underwriting jihadist groups. With oil prices low, the Saudis also lost their lever within the peninsula. Countries like Yemen that had historically been overawed by the Saudis destabilized. In Iraq, the Sunnis allied with the Saudis were on the defensive – and losing.

Low oil prices demanded an alternative strategy. For the Saudis to survive, they would need to generate income from an additional source. Thus, King Salman handed the keys to the kingdom to his son, Mohammad bin Salman. In one of his first moves undertaken while he was still deputy crown prince, he unveiled a staggeringly ambitious plan called Vision 2030 to transform Saudi Arabia from an oil-based economy to an advanced industrial power. For this to work, two things had to happen. First, the members of the royal family and others had to align their economic interests with the Saudi state. The crown prince had to squeeze out money from inside and outside Saudi Arabia. The plan to sell part of state-owned oil firm Saudi Aramco was such an attempt, and it also symbolized the fact that oil could no longer be king.

Second, the crown prince had to break the Wahhabi clerics’ hold of Saudi culture. Building an industrial culture was not compatible with Wahhabism. The Wahhabis were committed to fixed social and gender relationships. These were consistent with an economy built on oil sales, but industrialization requires a dynamic culture with social relations constantly shifting.

The resistance to the new plan was intense but quiet, as the culture required. Mohammad bin Salman obviously reached the conclusion that he had to confront this opposition openly lest it quietly undermine his plan. His first major open move was to allow women to drive. That represented a direct attack on the clerics and caused a great deal of upset. His second move was to go forward with the stalled Saudi Aramco initial public offering. He will select the exchange where the shares will be traded in 2018.

The direct attack was undoubtedly met with threats of a coup. Whether one was actually planned didn’t matter. He had to assume these threats were credible since so many interests were under attack. So he struck first, arresting princes and ex-minsters who constituted the Saudi elite. It was a dangerous gamble. A powerful opposition still exists, but he had no choice but to act. He could either strike as he did last Saturday night, or allow his enemies to choose the time and place of that attack. Nothing is secure yet, but with this strike, there is a chance he might have bought time. Any Saudi who would take on princes and clerics is obviously desperate, but he may well break the hold of the financial and religious elite.

In the midst of this, an external enemy saw an opening. A day before the strike, a missile was fired at Riyadh from Yemen by the Houthis – a Shiite sect allied with Iran. Saudi officials say the missile was produced by Iran, although the Iranians deny this. It was a serious attempt to strike Riyadh, but the Saudis intercepted the missile.

The Trump administration has placed heavy emphasis on Iran’s missile program. The Iranians have been doing well since the nuclear deal was signed in 2015. They have become the dominant political force in Iraq. Their support for the Bashar Assad regime in Syria may not have been enough to save him, but Iran was on what appears to be the winning side in the Syrian civil war. Hezbollah has been hurt by its participation in the war but is reviving, carrying Iranian influence in Lebanon at a time when Lebanon is in crisis after the resignation of its prime minister last week.

The Saudis, on the other hand, aren’t doing as well. The Saudi-built anti-Houthi coalition in Yemen has failed to break the Houthi-led opposition. And Iran has openly entered into an alliance with Qatar against the wishes of the Saudis and their ally, the United Arab Emirates.

Iran seems to sense the possibility of achieving a dream: destabilizing Saudi Arabia, ending its ability to support anti-Iranian forces, and breaking the power of the Sunni Wahhabis. Iran must look at the arrests in Saudi Arabia as a very bad move. And they may be. Mohammad bin Salman has backed the fundamentalists and the financial elite against the wall. They are desperate, and now it is their turn to roll the dice. If they fall short, it could result in a civil war in Saudi Arabia. If Iran can hit Riyadh with missiles, the crown prince’s opponents could argue that the young prince is so busy with his plans that he isn’t paying attention to the real threat. For the Iranians, the best outcome is to have no one come out on top.

This would reconfigure the geopolitics of the Middle East, and since the U.S. is deeply involved there, it has decisions to make. The U.S. needs regional counters to the Iranians. The Saudis are the major force, but if they cannot play a role as regional leader, the U.S. will have to look for alternatives. One option is to engage in another intervention in the Middle East, something that hasn’t work out well for the U.S. in the past. The U.S. obviously backs Saudi modernization because it would weaken the Wahhabis, but this is a long-term project.

Saturday night will stand as the beginning of a new Saudi Arabia or as the end of the experiment. Either way, the Saudis are weakening. That is good for Iran and bad for the United States. Encouraging the Saudis to make these changes might seem like a good idea, but it has every opportunity to leave the U.S. position in the region much worse.

The Resurgence of Tribalism in Saudi Arabia

Struggling to Find the Exit From War