India is the world’s largest secular democracy – but for how much longer? The rise of right-wing Hindu nationalism is pitting the country’s Hindu majority against its minorities. This trend threatens the stability of what will soon be the most populous country in the world.

India’s stability has made it one of the exceptions in Eurasia. The European Union, Russia, the Middle East and China have been marred by all manner of crises. India’s own region, South Asia, has had as many problems as any, but India has stood in stark contrast to the rest of the region. And changes underway in Indian society and politics could spell trouble in the next decade.

Mob violence against minorities, especially Muslims, has spiked in recent months. Dubbed “cow vigilantism,” the attacks – carried out by Hindu nationalists who support the ruling Bharatiya Janata Party, or BJP – seek to prevent the consumption of beef, given the sanctity with which Hindus hold cows. In response to the violence, protests were held in a dozen cities across India on June 28, including Delhi, Mumbai and Kolkata.

Reports on the size of the protests vary from the hundreds to the thousands per city. Either way, these numbers are insignificant for a population as large as India’s. Still, they point to a deeper problem: the retreat of secularism in a notoriously secular state. For a country with such ethnic, linguistic, religious and cultural diversity, this is a dangerous trend.

The Rise of Hindu Nationalism

Since it gained independence in 1947, India has indeed been hailed as the most important secular democracy outside the Western world. For decades, under the rule of the center-left Indian National Congress party, secularism and democracy helped to hold India’s diverse population together. But since the 1990s, right-wing Hindu nationalism has steadily grown alongside the rise of the BJP. In 2014, when the BJP won a major victory in general elections under the leadership of populist candidate and current prime minister Narendra Modi, the BJP consolidated its power.

The Indian National Congress party had been losing support for years. It was seen as stale and corrupt, incapable of meeting the political and economic challenges of the day. In contrast, Modi’s BJP was seen as being able to make the radical changes necessary to uplift the Indian masses from poverty. The base of the BJP’s support, however, comes from its Hindu nationalist allies. These groups have grown even stronger at the grassroots level since the BJP’s victory in recent major state elections. (Modi doesn’t encourage this type of violence, but his politics has catalyzed a dynamic he cannot really control.) 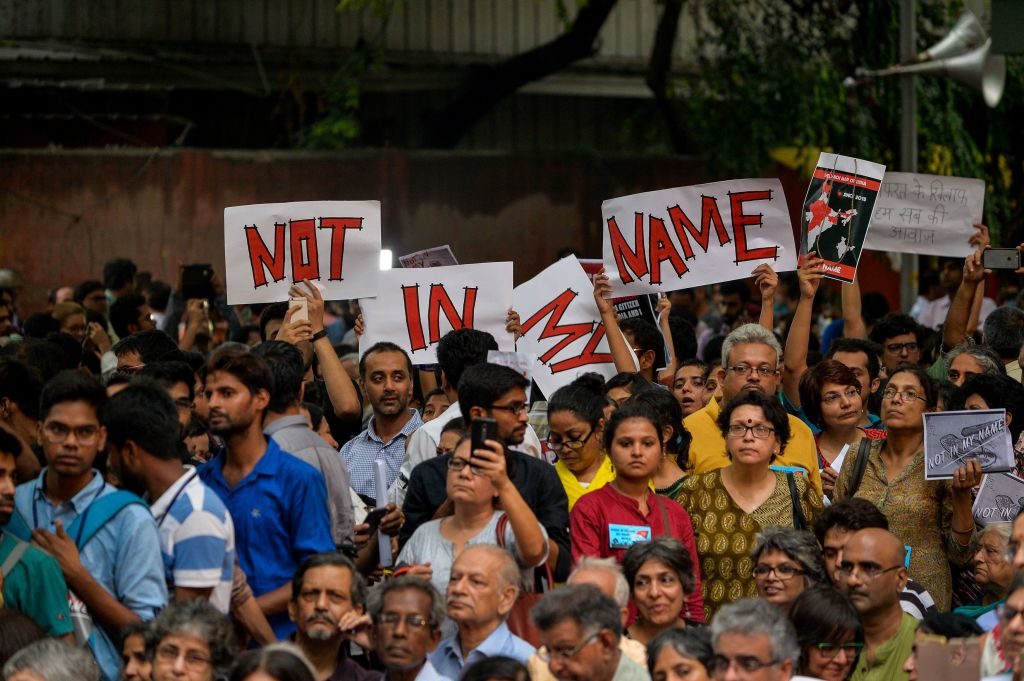 Hindu nationalism is based partly on its antipathy to Islam. Hindu nationalists believe their religion and culture were suppressed by the Muslim who invaded India from Central Asia and ruled the country from the late 900s to the mid-1800s. The British then took control of India and ruled it for about another century. And so India became a secular republic – which, for Hindu nationalists, is just a continuation of the suppression of India’s Hindu character.

From their perspective, secularism is a weak national ideology that can’t protect the country from rising Islamism in Muslim-majority countries, especially in neighboring Pakistan. Hindu nationalists see the roughly 200 million Muslims of India as a potential fifth column; they worry that Muslims are sympathetic to Pakistan and that they intend to undermine the Hindu majority. The longstanding conflict between India and Pakistan over the Kashmir region, and the subversion of Kashmiri separatism in recent decades by Pakistan-based jihadist forces, has greatly contributed to the growing Hindu nationalist wave in India. In this way, Hindu nationalism and Islamism feed off one another.

The political and economic failures of the Congress party and the populism of the BJP under Modi mean that this trend of waning secularism is not about to reverse itself anytime soon. Polls show that support for the BJP remains high, while the Indian National Congress party, the country’s main secular political force, has a long way to go to become relevant again. Even when it recovers, getting Hindu nationalism under control will be a tall task.

Between India’s demography and the geopolitics of the region, it won’t be difficult for right-wing Hindu nationalism to maintain its appeal. This is bad news for a country whose minorities already feel vulnerable. These are the precise conditions in which jihadist groups tend to find the most success in recruiting.

The Islamic State already has a strong presence in neighboring Afghanistan, Pakistan and Bangladesh, and there are now reports that it is expanding its footprint in India. Past attacks in India by Islamist militants based in neighboring Pakistan have brought the two rival nuclear powers to the brink of war on three separate occasions (2002, 2008 and 2016).

For jihadists, unrest and war are good for business. These are the types of conditions that IS, al-Qaida and other groups – many of which are or were supported by Pakistan before striking out on their own and embracing transnational jihadism – seek out to advance their strategic objectives. Historically, India’s Muslims have been well integrated into the national fabric because of India’s secularism, hence why jihadists have not had much success in penetrating the country beyond Kashmir. Now that nationalism is tearing the fabric apart, however, the jihadists know that their attacks will provoke a backlash against India’s Muslims from Hindu nationalists, which will only make recruitment easier.

These are realities that have long threatened South Asian security. But the rise in Hindu nationalism is creating opportunities for jihadists in India that didn’t exist when the country was more secular. Over the next decade, the instability inside India is likely to grow — to the detriment of the entire region.