I’ve often written about chokepoints – those narrow passageways, on land or at sea, that are essential for the movement of goods and people – in the context of waging war. They can be blocked by military means or by natural forces or, as we’ve recently seen, by human error in times of peace.

There are two types of chokepoints. There is the type that nature creates, and the type that humans construct, normally to create a route to a desired objective, a route that had not been there before. In general, those that are created by humans are less robust than those created by nature. Human-designed chokepoints are normally narrower and easier to block than natural ones because engineering is forced, by the vastness of the task, to create a passage of minimal width due to the tremendous amount of labor and cost necessary to build it. Nature is more generous. 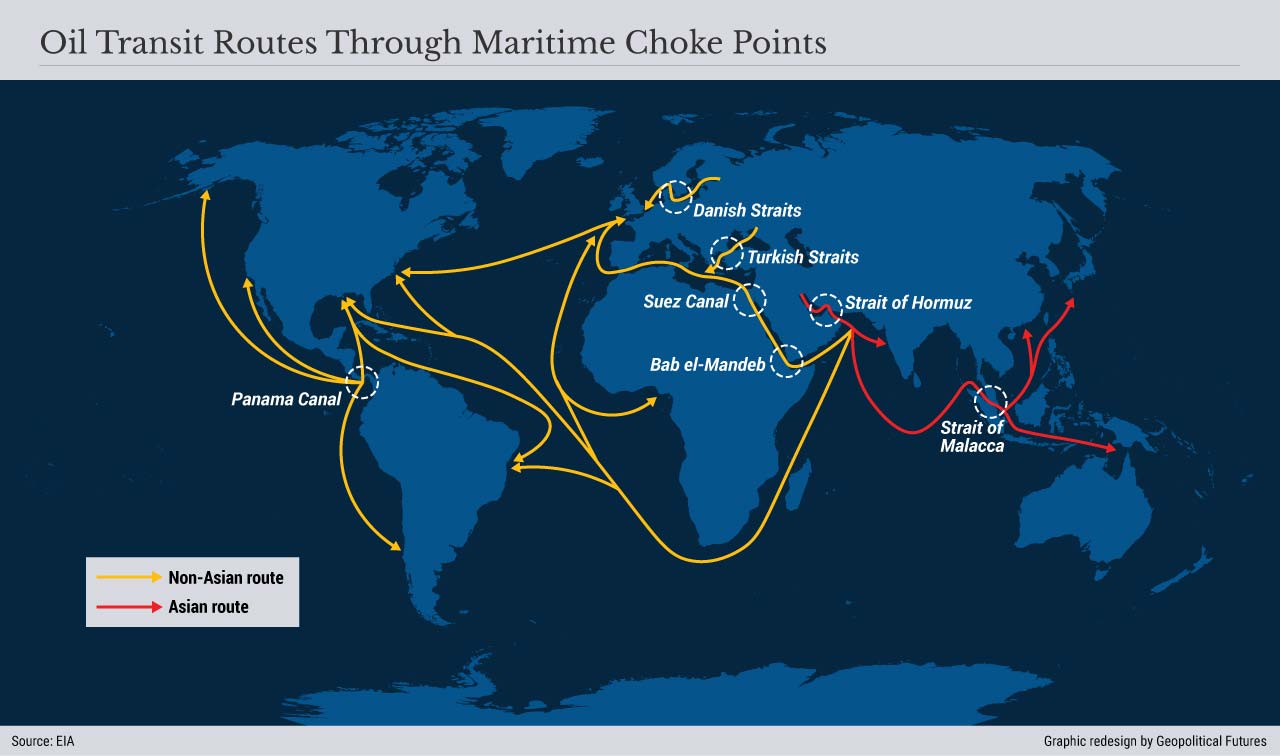 The important element of a chokepoint is time. The permanent closure of a chokepoint can have extreme consequences, depending on the importance of what passed through it, and who was dependent on the things that were passed. A short closure may have limited consequences by comparison. The ease of closure and the amount of time to reopening is critical. On the whole, maritime chokepoints tend to be more significant than their terrestrial counterparts, especially because of modern economics and warfare, global maritime trade, the dependence of nations on that trade and the increased power of naval forces. In short, chokepoints are central to geopolitical thinking.

For military planners and high-level strategists, chokepoints are always close to mind. But in the commercial world, critical as business is to national interest, there has been an implicit assumption that the various chokepoints are merely geographic features that will be permanently in place. What they know perhaps in a vague sense was driven home painfully with the blockage of the Suez Canal.

The Suez Canal is an artificial passage between the Mediterranean and the Red Sea. It was developed by a private corporation in which British and French interests held the majority of shares. In being the highway between the Mediterranean and the Red Sea, it shortened the distance between the United Kingdom and its vast interests in the Indian Ocean basin, and between France and its holdings in Indo-China. The Suez Canal was the foundation of the European empire in Asia and its closure would have been a disaster. Securing the Suez, and its sister chokepoint at Gibraltar, was a geopolitical imperative for the empires, and shaped their strategic and commercial strategy. In World War II, Field Marshal Erwin Rommel intended to take the canal, hoping to destroy the flow of goods from India and of troops from Australia and New Zealand. In 1956, when Britain and France (aided by Israel) invaded to prevent Egypt from nationalizing the canal, the United States, hostile to British and French imperial interests, compelled them to withdraw.

The argument they made against ceding the Suez Canal to Egypt was that Egypt lacked the expertise to maintain it. The United States, having owned the more complex Panama Canal for some time, was confident it could oversee its management. The Egyptian shift to the Soviet camp undermined these efforts, and the condition of the canal became somewhat more tenuous. In 1967, the canal closed after the Six-Day War and was reopened around 1980, after the Camp David Accords. There is much more to the tale, but suffice it to say that the canal, an artificial and therefore narrow waterway, has been a geopolitical pivot since it was opened, and that the fate of empires has turned on it.

Its importance has been made clear by the Ever Given, the ship that was until Monday stuck in the canal. It created a worldwide traffic jam for cargo traveling between the Mediterranean and Indian Ocean. The Suez is open for business again, but in some ways the damage is already done. Syria, for example, has announced that it is running out of oil. Other countries the world over will likely soon claim likewise for any number of other goods. Economic uncertainty, it seems, is here to stay.

Of course, no one came to blows over the Suez. But in looking at other important chokepoints, that may not always be the case. The Strait of Malacca, for example, through which passage between the Indian Ocean and the Pacific takes place, is absolutely critical for China, as are the chokepoints created by nations and smaller islands east of China. China’s fundamental fear is that the U.S. might close both Malacca and the island chokepoints, which would utterly cripple the Chinese economy.

The world is filled with these kinds of bottlenecks, with some nations more beholden to them than others. Suez has demonstrated the fragility of manmade chokepoints, but mines, submarines, cruise missiles and the like can effectively close off any chokepoint at any time, even the vast system of multiple chokepoints. Any future war will be based on this reality, as past wars were. The Suez should remind us of our vulnerability not to accident alone, but also to the nature of wars that for humans are always on the horizon.