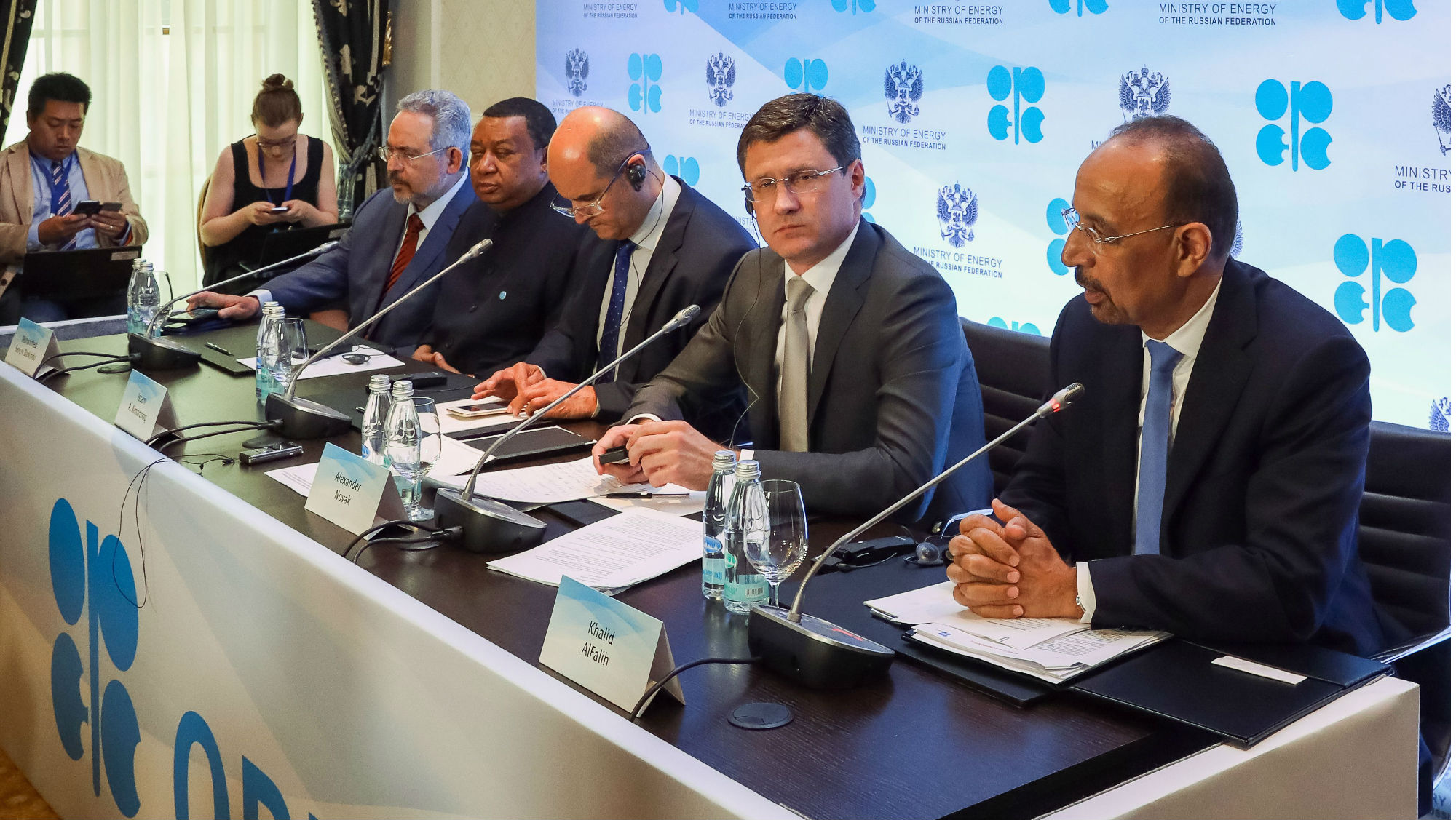 Brent crude oil prices have reached their highest level since May 2015, hovering around $69.90 per barrel as of this writing. On Jan. 9, when prices surpassed $68 a barrel, the number held a special significance for Russia because $68 is the price around which Russia can balance its budget. The questions now become whether these prices can hold, and whether the economic problems that have plagued Russia since 2014 will abate as a result.

The answer to both questions is: probably not.

First, oil markets, like all markets, are fickle. Daily price movements are only loosely based on price fundamentals, which is why they are so notoriously difficult to predict. They are based as much on human psychology and speculation as on supply and demand. Though there has been a string of incidents that have buoyed oil prices, there is little reason to think prices will remain at the current level or much exceed it.

Oil prices have risen about 11 percent since the beginning of December 2017 because of a combination of factors. A larger-than-expected decline in U.S. crude stocks appears to be the main reason, but it is hardly the only one. The OPEC-Russia agreement at the beginning of December 2016 to cut production has not been honored by all the parties, but Saudi Arabia and other Gulf countries continue to maintain significant cuts to their individual production. Supply disruptions in Venezuela and uncertainty in Iraq and Iran put upward pressure on prices. Cold weather led to an increase in demand worldwide for petroleum products. U.S. production fell slightly the past two weeks, ending a run of nine consecutive weeks of production increases.

There is, however, little reason to think prices will remain this high ($68-$69 per barrel) in 2018. On Jan. 9, the U.S. Energy Information Administration published its Short-Term Energy Outlook, forecasting Brent crude to average around $60 a barrel in 2018 and $61 in 2019. The EIA expects that total global crude oil production will be greater than total consumption in 2018 and 2019.

More notable, however, is EIA’s prediction that crude oil production in the U.S. will increase by roughly 11 percent to 10.3 million barrels per day, which would mark the highest level of production by the U.S. in history and would also represent a larger increase in production than in any other country for the year ahead. (In the past, the EIA’s forecasts about U.S. production have been conservative. Last year, the EIA predicted that U.S. production would average 8.7 million bpd. Instead, the U.S. averaged 9.3 million bpd.) 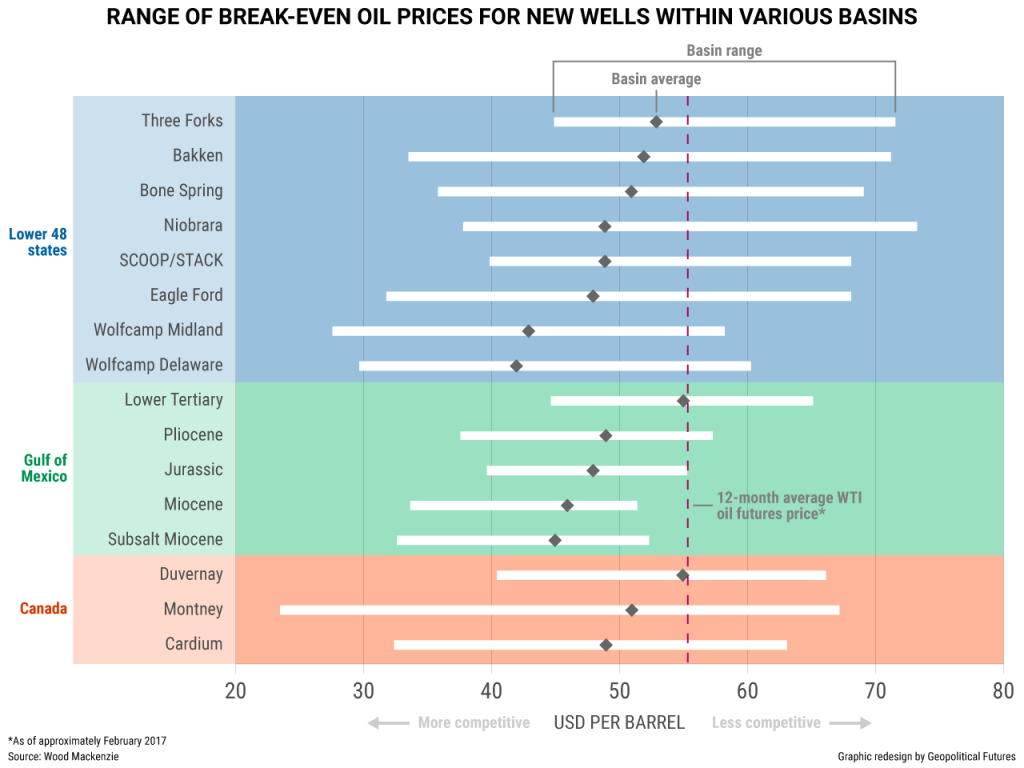 The reason U.S. oil production has steadily increased, even as prices dipped as low as $28 a barrel in 2015, is because of technological innovation. U.S. shale oil producers have reduced their per-barrel costs significantly, enabling them to compete in global markets at price points that before were unimaginable. In the early 2010s, oil prices had to be between $60 and $80 a barrel for U.S. shale companies to maintain viability. That range is now estimated to be between $40 and $60 a barrel, or even lower for some new oil wells. In practical terms, this means that, absent a crisis that would take production completely offline in a major oil-producing country like Saudi Arabia or Russia (which we don’t see happening), there is a ceiling on how high oil prices can rise.

This leads us to the second question: what this means for Russia. The current price levels are unlikely to hold, and most forecasts see oil prices averaging around $60 a barrel in 2018 and 2019. When we initially calculated that Russia needed prices around $68 a barrel to balance its budget, the situation was far more dire. Oil prices in December 2016 were around $43 a barrel, which meant that without spending cuts, Russia was looking at a budget deficit in 2017 of almost $50 billion. Perhaps, then, if Russia tightened its belt, it could get by at $60 a barrel. Unfortunately for Russia, however, balancing the budget can’t help the country recover what it has already lost. 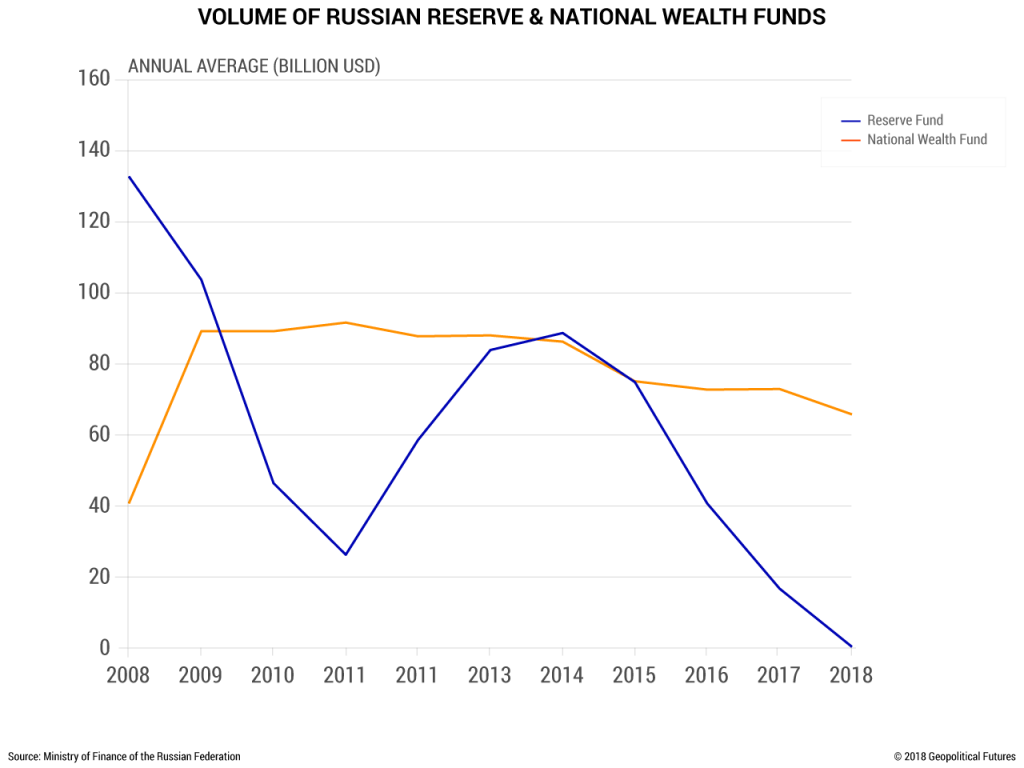 In February 2008, Russia’s Reserve Fund had $125.2 billion, or 7.4 percent of Russia’s gross domestic product. At its peak, the Reserve Fund had $137.3 billion – 12.5 percent of Russia’s GDP. The Finance Ministry announced Jan. 10 that the fund was depleted. The last $17 billion or so that had been there in December 2017 was spent, as planned, to cover budget shortfalls. Russia is now tapping into its National Wealth Fund, the value of which dropped 9 percent in the past year and 2.7 percent in the past month. The original purpose of this fund was to support Russia’s pension system, not to cover budget deficits. But it will be more difficult to pull money from the National Wealth Fund than from the Reserve Fund, making it a less reliable fallback. Further, Russia has already been forced to make cuts to pensions and benefits in recent years, creating a certain degree of domestic dissatisfaction. Russia has managed this dissatisfaction by a combination of adventurism abroad (the war in Syria) and consolidation of central government power at home via arrests, forced resignations and political reshufflings. But managing is not the same as eliminating, and the threat to the regime remains.

None of this is to say Russia is on the brink of economic catastrophe. Russia’s total international currency reserves, for example, are around $432 billion, so even when the National Wealth Fund is exhausted, Russia will have some cushion to fall back on. But spending its reserves risks devaluing the ruble, were its reserves to run low or out, and Russia has already struggled to maintain the strength of its currency. As the rapid depletion of the Reserve Fund has shown, cash can be spent very quickly, especially in times of crisis and considering Russia’s broad social requirements and defense needs. Though Russia’s economy is not in danger of collapse, it is still under serious pressure.

Russia’s economy remains overly dependent on oil prices. Manufacturing in Russia has grown in absolute terms but not enough to offset the country’s dependence on oil sales. Russia has netted important gains by getting creative with its tax code in recent years, but there are limits to how tightly the central government can squeeze and maintain loyalty from the rest of the federation.

Only two things can solve Russia’s economic problems. One is a return to $100-a-barrel oil, which would be enough not only to reverse Russia’s deficit but also begin to replenish its reserves. That is extremely unlikely. The second is a massive transformation of the Russian economy. That is also extremely unlikely, though Russia is trying hard to convince anyone who will listen that it can be done (Moscow will use the upcoming World Cup as evidence). Moscow’s current challenge, like the Soviet Union’s and like the czars’ before it, is ruling a country of immense size and diversity. Russia can take some solace from oil prices rising beyond their disastrous 2014-2015 trough, but the underlying problem that renders Russia a weakening power remains: Oil reaches its highest price since 2015, and the next day Russia reveals it has spent the entirety of its Reserve Fund to pay its bills.