Germany’s export-dependent economy is highly vulnerable as China slows down and a crisis of exporters unfolds. Last week, all eyes were on Volkswagen as the German company reached a preliminary agreement with the U.S. government following its emissions cheating scandal. The company has to pay $18.28 billion as a result of the scandal and might end up facing even higher costs. Nevertheless, it is the financial status of another German automaker, Daimler, that points to an even more serious problem for Germany’s economy. Daimler’s first-quarter report indicates that German exporters may be struggling to adjust to a global economic slowdown and may be using unsustainable business choices to keep export volumes high in the near term.

According to the World Bank, exports amount to about 45 percent of Germany’s GDP. Last year, Germany was somewhat able to compensate for falling demand in economies like China with increased exports to European markets and the U.S., as well as with domestic demand. But there are now growing indications that domestic demand and exports to alternative destinations are no longer shielding Germany from the global exporters’ crisis. Official data from Germany’s Ministry for Economic Affairs has shown that in February factory export orders fell 2.7 percent compared to the previous month. Notably, orders from the rest of the eurozone fell by 3.7 percent. Domestic orders rose merely 0.9 percent. At the same time, German businesses are beginning to grasp the extent of the challenges facing the country’s economy, with a business climate index compiled by the Ifo Institute for Economic Research showing that confidence has fallen for four out of the past five months. 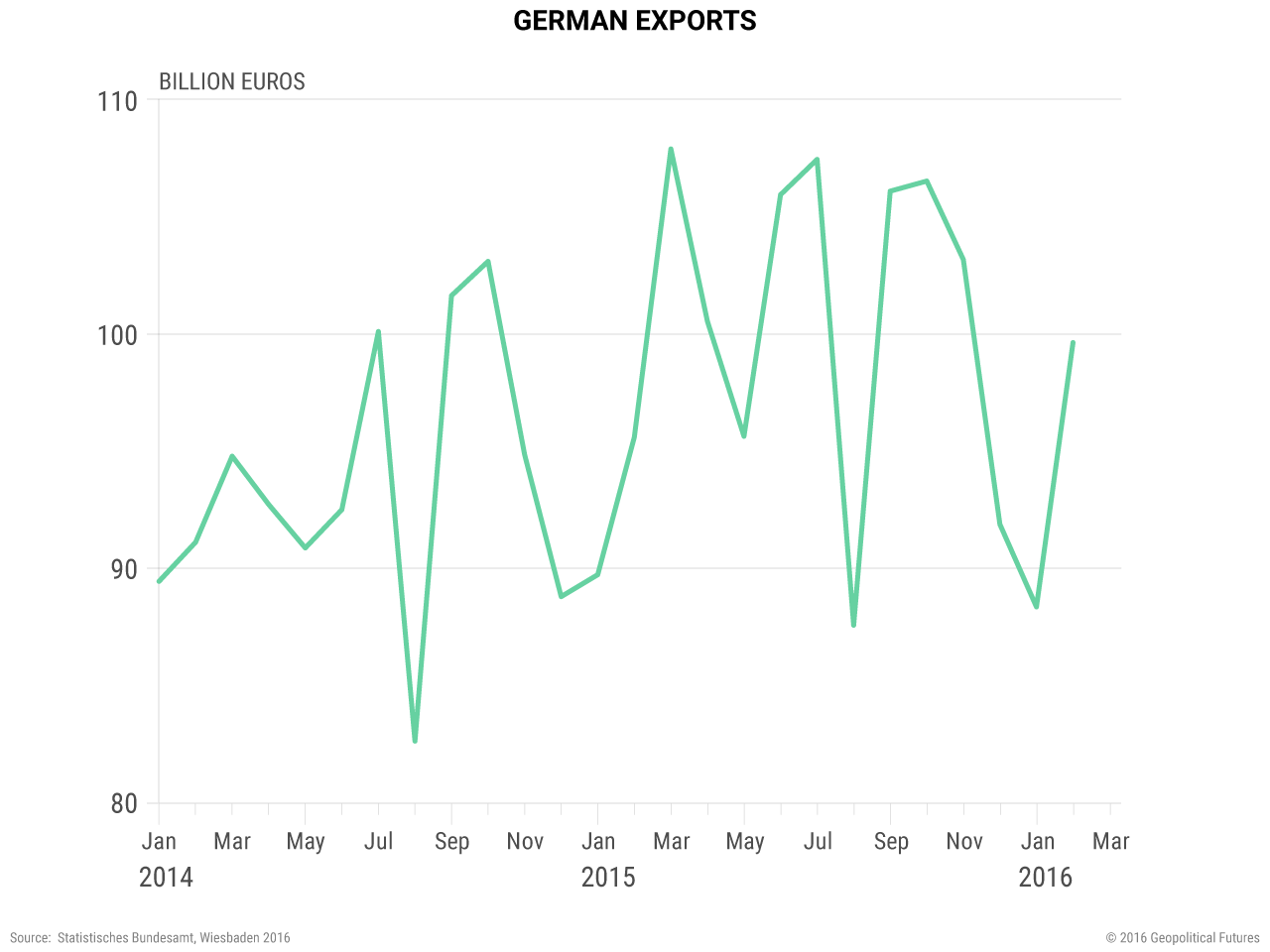 Daimler’s quarterly report, published on April 22, signals that German exporters may be failing to avoid the problems plaguing other global exporters and are possibly using short-term tactics to mask the full extent of their troubles. The report reveals that, while unit sales rose by 7 percent in the first quarter of 2016 compared to the previous year, revenues increased by only 2 percent. At the same time, earnings before interest and taxes (EBIT) fell by 26 percent year-on-year and net profit decreased by 34 percent. This shows a divergence between the company’s sales performance and its financial state. Daimler presented several reasons for the decline in EBIT, including low sales volumes for Mercedes’ S-Class and E-Class models and exchange rate fluctuations. Nevertheless, these challenges do not fully explain why the company’s revenue growth is not keeping up with sales growth. Mercedes Benz still sold 8 percent more cars by volume in the first quarter of this year than the previous year, and adjusted for exchange rate, Daimler’s overall revenue grew by only 4 percent.

It is possible that the discrepancy is due in part to Daimler selectively slashing prices or using other short-term tools to keep sales up as global demand slows down and the company’s financial prospects worsen. For example, while Daimler does not publish official global pricing statistics and offers a variety of pricing options across different markets, China’s economic troubles have led carmakers in the Chinese market – both domestic and foreign – to slash prices. Economic challenges may also be changing consumer preferences when choosing among Daimler brands. 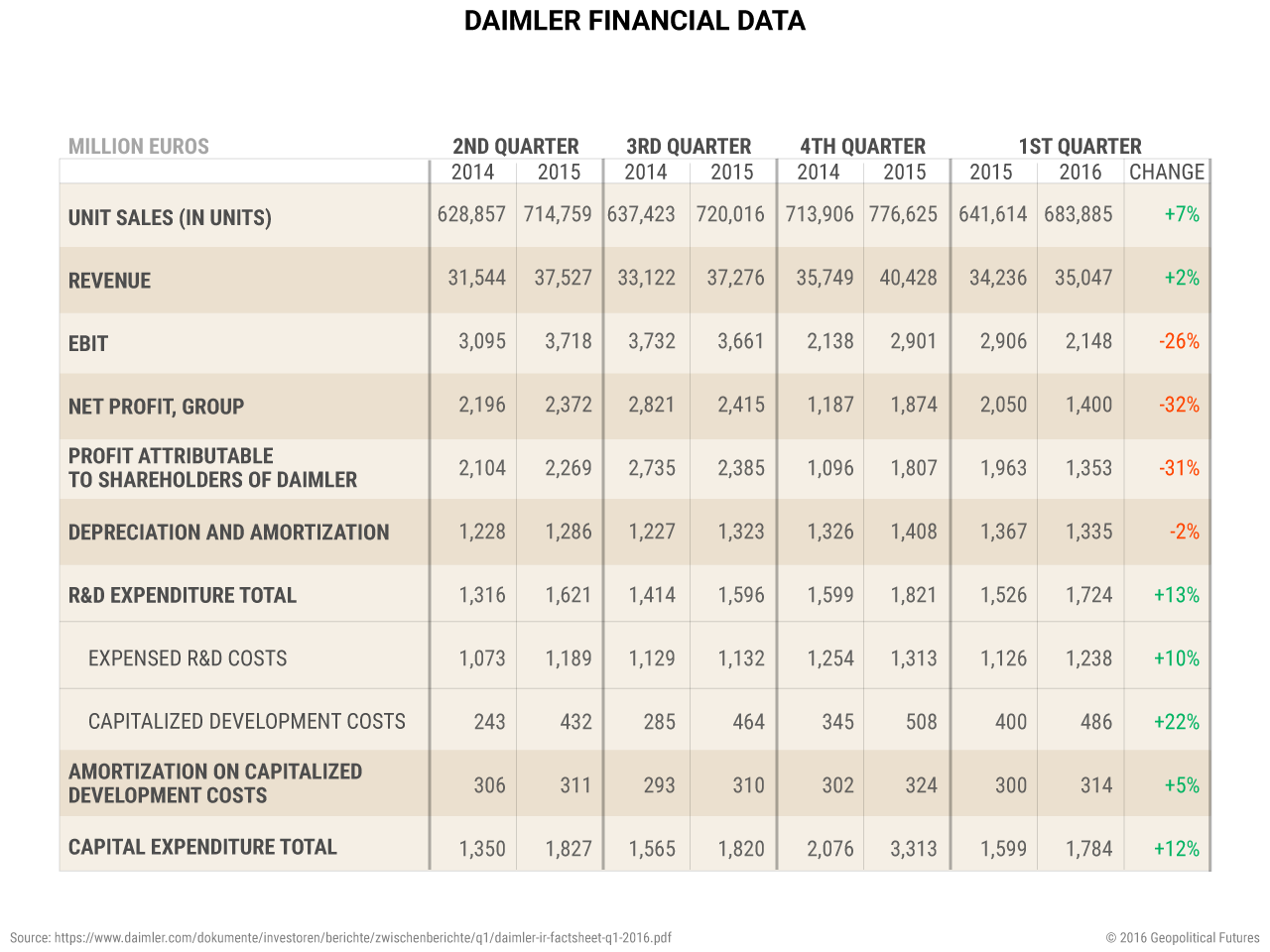 The gap between Daimler’s sales figures and its revenues is significant because it raises the possibility that German exporters are facing a more difficult business environment than what Germany’s official trade statistics imply. Trade statistics are compiled over time and sometimes mask key shifts, while company-level figures for important exports can at times provide early warning signs that macro data misses or has yet to reflect. Germany’s exporters are major sources of employment, as well as investment and tax revenues. In the short term, sacrificing net profits in order to compete for market share in a difficult business climate may be a useful tactic. However, we do not expect Chinese demand to revive or for the exporters’ crisis to recede any time soon. As a result, layoffs, cuts in funding for investment and innovation, and lower tax contributions to the German government will follow if German companies like Daimler begin experiencing regular decreases in net profits.

With nearly half of Germany’s economy dependent on exports, the impact of falling profits will reverberate not only inside Germany, but across the European Union. Germany is Europe’s economic powerhouse, and its economy and banking sector are closely intertwined with those of other European Union members. Germany is a major investor across the bloc. Moreover, several countries, especially in Central Europe, are heavily tied to the German economy because they export car parts and other components that are used in German exports. As a major EU economy, Germany contributes disproportionately to the EU’s budget. In 2014, according to the European Commission, Germany contributed 14 billion euros more to the EU budget than it received from the bloc. A crisis of German exporters would not remain merely a German problem for long, but would quickly become a European problem. Europe is already very divided, and economic challenges are mounting in Italy, Greece and elsewhere. A crisis in Germany would exacerbate both the political and economic fragmentation of the continent.

Germany’s future economic stability and position on the Continent depend in large part on the financial well-being of the country’s exporters. It remains to be seen whether German exporters other than Daimler are maintaining export volumes while experiencing shrinking net profit rates. Export volumes are important to watch, but the underlying financial health of major exporters is key.