One of Geopolitical Futures’ most controversial forecasts is that by 2040, Japan will rise as East Asia’s leading power. Many readers often ask for an explanation of the logic in this forecast. They understand that GPF is bearish on China. And while some readers may disagree on that point, they usually see that the reasoning is sound and that China will face serious problems in coming years… problems that will strain the Communist Party’s rule.

Japan, however, seems a bridge too far. Its population is less than a tenth of China’s size (and it’s not just aging but shrinking). Japan also has a debt-to-GDP ratio over 229%. So, how is it that Japan will emerge in the next 25 years as East Asia’s most powerful country?

A full answer would require more space than we have in this article. But a good place to start is a broad comparison of the structure of China and Japan’s economies (the second and third largest economies in the world, respectively). This analysis will reveal strengths and weaknesses for both and will aim to bring our forecast into sharper relief. 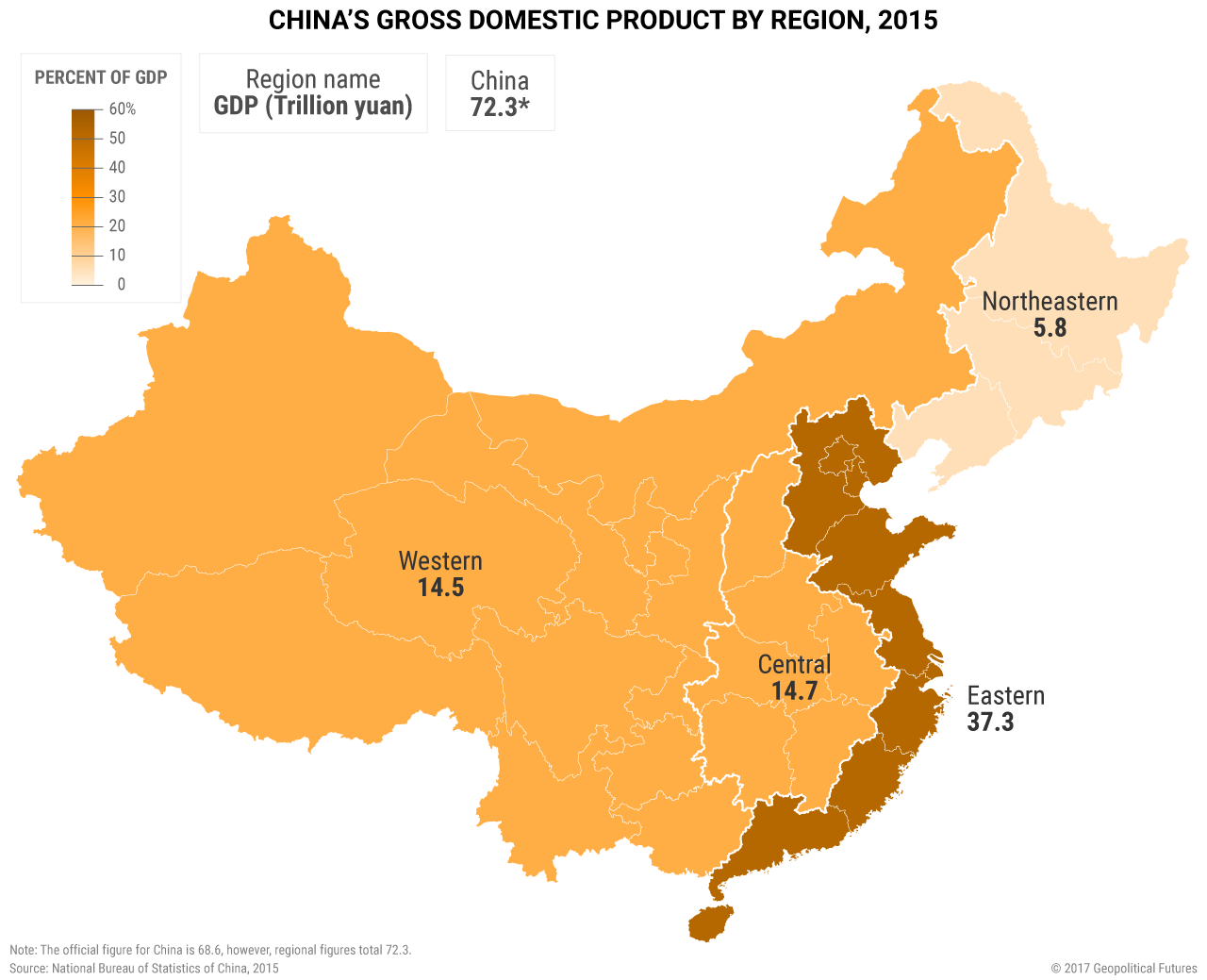 The map above divides China into four geographic regions by contribution to China’s national GDP. These regions do not have any official administrative function, but China’s National Bureau of Statistics sometimes uses these divisions to understand how China’s economy is performing at a regional level. It also must be noted that these figures are likely manipulated for political purposes.

The data are taken from the annual yearbook of China’s National Bureau of Statistics but contain notable discrepancies. For example, the regional figures do not add up to the national figure—adding the regional numbers yields a GDP that is roughly 5% (approximately $54 billion) greater than China’s reported national figure.

Accepting that some of these figures may be inflated or downplayed for various reasons, they still reveal much about China’s economic weaknesses. The coastal Eastern Region accounts for more than half of all economic activity in China. Stated another way, nine of China’s 34 provincial administrative units produce more than half of the country’s total wealth.

The Central and Western regions, in turn, each produce about 20% of China’s economic wealth. But that is somewhat misleading. The Western Region accounts for more than half of China’s total land area. When compared to other regions, it produces less than half the economic activity of the Eastern Region and produces the same amount as the Central Region, which is less than half its size.

The Northeastern Region appears to be an outlier. It accounts for just 8% of China’s GDP. Most of this region’s economic activity is heavy industry and has been under severe pressure as China attempts to increase internal demand and decrease dependence on exports.

In practical terms, this means that China’s biggest economic weakness… and its most potent enemy… is poverty. Regional economic disparities exist in many countries in the world. But in China, they have always been particularly acute, causing massive wealth disparity between China’s coastal provinces and its other regions.

China’s sheer size magnifies this problem. According to the World Bank, in 1981, roughly 1 billion Chinese people lived on less than $3.10 a day (at 2011 purchasing power parity). The World Bank’s latest data (from 2010) show that the number dropped to 360 million that year.

That is an awesome accomplishment—not in the present-day colloquial sense of the word “awesome,” but in the sense that it is worthy of awe and wonder. The problem is that it is also insufficient. China has been growing at a remarkable rate for the past 30 years, but that growth is slowing down, and 360 million people still live in abject poverty. Most of China’s economic success is enjoyed by the coast… not the rest of the country.

China is the most populous country in the world and the fourth largest in terms of area. This is a source of great power for China, but it is also a double-edged sword.

On the one hand, it means there are great advantages. China can deploy huge armies. It is buffered from enemies by vast territory or harsh geography on all sides. It can also mobilize human capital like no other country. (India possesses a similar population, but its government is far weaker and less centralized than China’s.)

On the other hand, it means that China often spends more on internal security than it does on the much-vaunted People’s Liberation Army. It also rules over many regions that are not ethnically Han Chinese and that want greater autonomy (if not independence). And China must maintain a robust capability to guard its borders.

China is a formidable land-based power, but China has never been a global maritime power in its long history. It has always been susceptible to internal revolution and, at times, external conquest.

Size is not always the most important part of power. In this case, distribution of wealth may not be sexy, but it is more important. 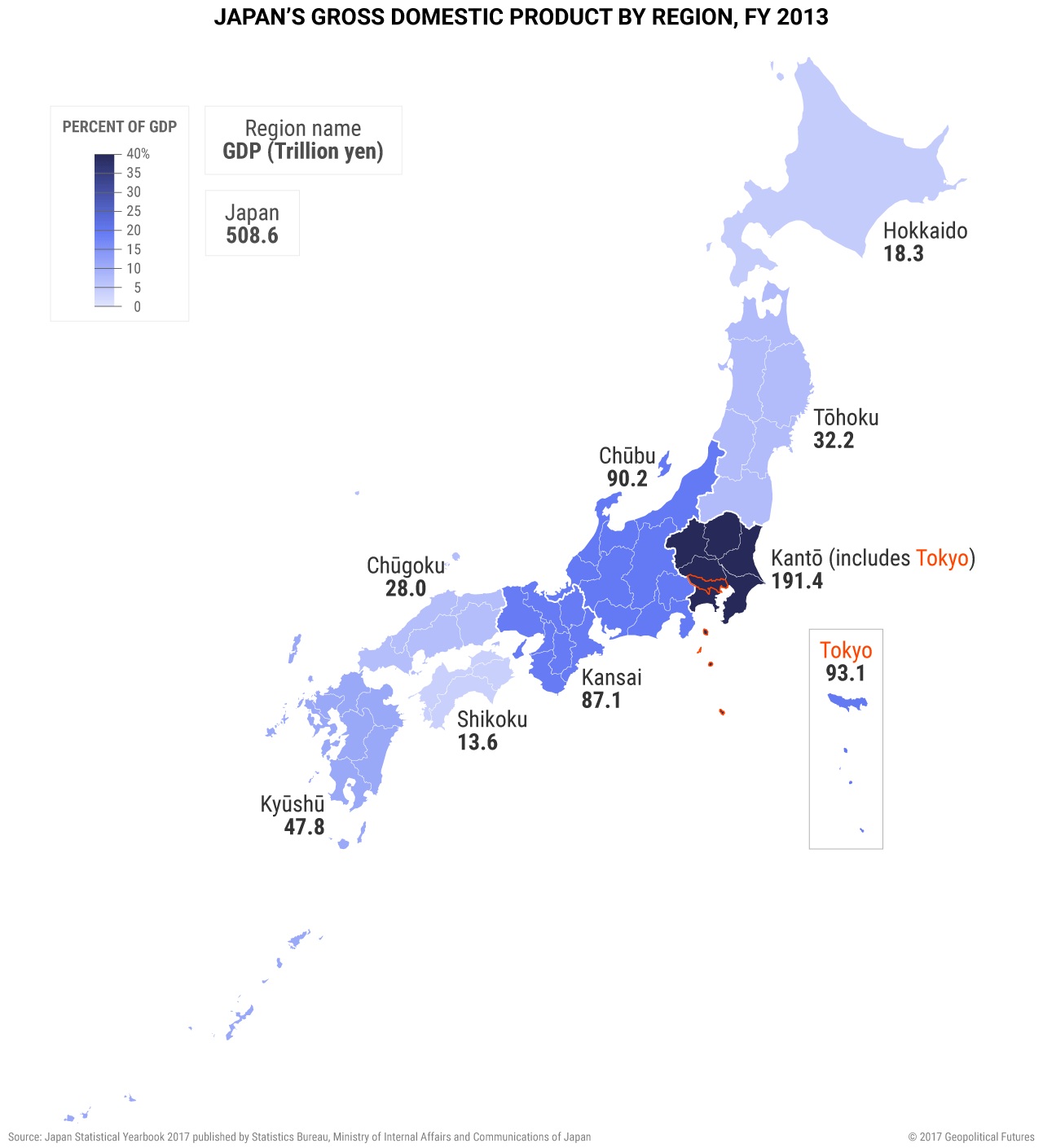 At first glance, this map of Japan would seem to imply a similar level of wealth concentration in certain regions. Like China, Japan is informally divided into regions and sometimes reports data at the regional level. Japan is made up of four main islands: Kyūshū, Shikoku, Honshu, and Hokkaido (there are other small islands, but these four mainly compose the Japanese nation-state).

Kyūshū, Shikoku, and Hokkaido constitute regions of their own. Honshu, by far the largest and most populous of the Japanese islands, is subdivided into five additional regions. Together, these five Honshu regions account for 87% of the Japanese economy. About 43% of that economic activity comes from the Kantō Region’s seven prefectures. Stated another way, seven prefectures of a total of 47 generate 37.6% of Japan’s economy.

Factoring in the Tokyo greater metropolitan area increases this figure. According to the latest available data from the Organisation for Economic Co-operation and Development (from 2012), Tokyo had the largest GDP of any city in the world at $1.48 trillion. (Seoul was second with a GDP of less than half of that.) That means that greater Tokyo accounts for almost a third of Japan’s total GDP.

The disparity of wealth between China’s coast and interior is striking, but arguably it is even more pronounced at first glance when looking at this map of Japan.

The latest per capita GDP data available at the prefectural level in Japan is from 2013, but it paints a different picture. The gulf between the prefectures with the highest and lowest per capita income is stark. Tokyo’s GDP per capita is 4.5 million yen ($40,000), while Okinawa’s is 2.1 million yen. But Tokyo is a significant outlier in this regard. In the China example, almost every coastal province could be compared with an interior province and a similar gulf would exist. In Japan, only Tokyo is significantly above the mean per capita income of 3.1 million yen for the entire country, and that is due, in part, to the higher cost of living in the city. There is wealth disparity in Japan to be sure, but the disparity is not on the same scale as that which exists at the provincial level in China.

Japan’s greatest challenge has little to do with regional wealth disparity or poverty. Japan’s great weakness is its dependence on imports for food and raw materials. According to Japan’s Ministry of Agriculture, Forestry and Fisheries, the country’s total food self-sufficiency ratio based on calorie supply was just 39% in 2015. Based on production value, it was just 66%. According to last month’s import data released by the same ministry, Japan imported 24.3 million tons of cereals, of which Japan was self-sufficient only in rice. Japan relies almost entirely on imports for staples like wheat, barley, corn, and soy.

Energy is another example of this dependence on imports. One of the main reasons Japan entered World War II was to protect its access to oil. Today, Japan remains reliant on foreign sources of energy. Even before the Fukushima nuclear reactor accident in 2011, Japan relied on foreign sources for close to 80% of its energy supply. Since 2012, that number has risen to almost 91% (according to the US Energy Information Administration). For mineral resources like copper, lead, zinc, and others that are important for an industrialized economy, Japan is also highly dependent on imports.

Some will argue that Japan’s bigger problem is demographics. It is true that Japan has a rapidly aging population. But so does China: The number of working-age Chinese has been declining since 2013. Most European countries also face this issue… Germany most prominent among them. Demographics are notoriously hard to predict, as are the effects of demographic changes.

What can be said is this: Japan is one of the top investors in the world in artificial intelligence research, automation, and robotics technology in order to maintain productivity. And while Japanese society is homogenous and relatively unfriendly to outsiders, desperate circumstances could call for desperate measures and necessitate changing policies on immigration. The broader Asia-Pacific region also offers opportunities for Japan to find workers if it needed.

The point here is that Japan is facing a demographic problem, but so is much of the industrialized world. There are tangible things Japan can do to improve the situation. The same is not true of Japan’s lack of natural resources—there is no magic solution to not having enough copper at home.

Japan is the 62nd largest country in terms of area. Countries like Uzbekistan, Yemen, and Botswana are all bigger in size. It is the 11th largest in terms of population—Indonesia, Pakistan, and Bangladesh all have much larger populations than Japan. Neither of these facts disqualify Japan from rising as a regional power. The United Kingdom ruled the world with a small population and a country slightly smaller in area than Japan. Japan’s ability to dominate the region, therefore, cannot be ruled out based on size and demographics alone.

Unlike China, Japan has no land-based enemies—it is an island nation. Unlike China, the Japanese government has no concern about its ability to impose its writ throughout the entire country. Nor does it have to contend with a huge gulf in wealth disparity between different parts of the country. Japan has already managed a transition from a high-growth economy to a low-growth economy without revolution.

To be clear, China is still an immensely powerful country relative to most in the world. In addition, much of GPF’s writing remains focused on understanding how economic problems in China are manifesting in political challenges. For now, Japan is less dynamic and important… though it will become more so… and our writing will increase as it does.

For now, what happens in China has a major impact on the global economy, and a great deal is happening. China is also pouring money into developing its military capabilities—especially its navy—to be better prepared to assert Chinese power at a global scale, and these capabilities must be constantly tracked. The problem for China is that it is unclear if the country can pull off the kind of politically stable economic transition that Japan managed when its high-growth “miracle” ended in the early 1990s.