On May 8, 1945, Germany formally declared defeat in World War II. As others have said, there was one war in Europe that began in 1914 and ended in 1945, with a 20-year truce in between. Both wars pitted Germany against France, Russia and Britain with increasing involvement of the United States. It is not an overstatement to say that it was a war of Germany against the rest of Europe, with lesser European powers scattered in minor coalitions with one side or another. The wars began in the deep structure of Europe, but they were initiated on a broader scale by Germany and ended when Germany surrendered. The two wars might collectively be called the German War, laying the groundwork for asking how much of the Germany that was crushed in 1945 remains today. It’s therefore safe to say that 76 years ago, the Germans collapsed and, with that, the European war that began in 1914.

Germany did not unite as a country until 1871. The unifying principle was not religion or culture, as there were significant variations, but a common language that enveloped a common myth of the German past, a myth quite at odds with its reality. Emerging from this complex mix was a single powerful reality. Germany created an extraordinary economy. It passed France quickly and then surged past Great Britain, becoming the economic powerhouse of Europe.

The economic surge threatened to exhaust German raw materials, turning the country into a hostage of its suppliers. It was also exhausting the appetite for German goods in Europe. There were scant markets in play, but Germany was forced to both look beyond Europe and box European competitors out of Europe’s markets. That problem was not economic but political, and the political problem was ultimately military.

Max Weber, a famous and still admired sociologist, said during unification that Germany had become a nation-state too late. France and Britain had empires from which to draw. Germany had only Europe. Thus, he said, economics dictated that Germany secure its own empire. He did not mention that the good parts had been taken, the rest were of lesser value, and empire therefore meant war. His thinking became common, and Germany began building a navy.

Europe was attentive to but not horrified by German unification. It was stunned at the speed at which Germany became an economic power, but most saw ways to take advantage of it. But as it became Europe’s dominant economic power, and as it began to modernize its military, concern grew. Germany sought to create a continental alliance. The Austro-Hungarians bought in but were not the key. Russia, with its vast resources, ultimately said no. France and Britain were not prepared to be Germany’s junior partners.

Germany understood the military panel. Russia, France and Britain were reaching clear understandings. A simultaneous attack by France and Russia, accompanied by a British blockade, would break Germany. The only counters to this were to curb their economic and military power, thereby reducing the military threat but leaving them dependent on the others’ goodwill – never a good position to be in. Alternatively, the Germans could take military action, forcing at least one of the three powers to capitulate. Its choice was to crush France, execute a holding action against Russia, and then deal with British naval power at a later date. The key to Germany’s reality is that if alarm over its economic power grew, the pressure on the triple alliance to act would grow, and Germany would lose its agency. Therefore, it executed its plan before the others could strike. Germany would have won, I think, if it had made a deal with Russia. Instead, it was forced to fight three armies, and it lost.

The description of World War II is the description of World War I. It was the same war. Germany surged economically after Hitler came to power. It had a need to expand, and the same coalition of forces – Russia, France and Britain – were potential enemies. Political solutions were tried, but the same need to avoid a two-front war trapped Germany into the same strategy. After various political maneuvers, it attacked France, this time defeating its army, occupying it and forcing Britain off the Continent. It then attacked Russia, once again underestimating the Russian ability to survive defeats and casualties that would break other countries. And totally left out of the equation was the United States, so great that Hitler declared war on it, forcing it into war.

May 8, 1945, found two significant powers in Europe, neither of which were fully European. One was the Soviet Union. The other was the United States. Germany was no longer a united nation-state but an occupied territory. Its economy was a wreck, its military not fully under German command. 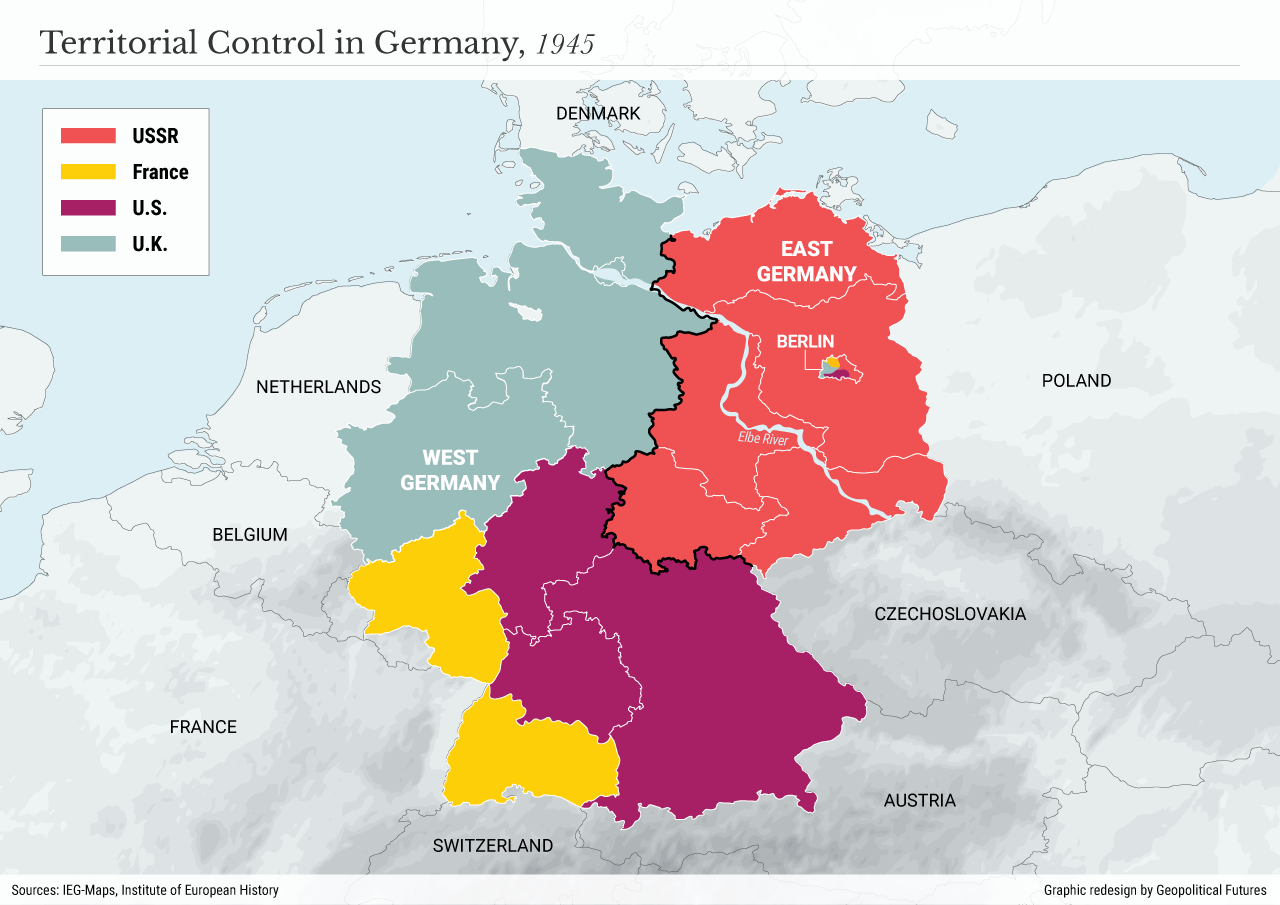 In 1989, nearly 120 years after the first unification, Germany reunited. Its economy, surging before and continuing to surge after reunification, is today the leading power in Europe, particularly now that Britain has left the European Union. Germany has learned from its past. Its strategy is not to maintain military force. It searched to find a basis for working with the Soviets. Its historic competitor, Britain, is out of the EU, and the economic alliance of which it is only one member pivots around German economic power. Germany has sought to avoid the threat of war while dominating Europe by making certain that Russia is not hostile and that France doesn’t seek alliance with it.

Some 76 years after its surrender, Germany is again the economic pivot of Europe and the fourth-largest economy in the world. It underestimates no one, but the truth is that no one underestimates Germany. Britain has seceded from the German-led union. Russia courts Germany, and the Germans have mastered coyness. France searches for its place in the sun, which is often blocked by Germany. And the United States lurks in the distance happily indifferent to Europe’s problems.

Each had a mortal fear of the other. Now each has mild unease. And geopolitics is not shaped by good intentions, of which there are many. May 8, 1945, was certainly a comma in history. It remains to be seen if it was a period.