The U.S. Congress is close to passing a resolution increasing sanctions on Russia, along with Iran and North Korea, and it’s likely that President Donald Trump will approve it. The bill passed the House of Representatives with overwhelming and bipartisan support, revised primarily to give some leeway to energy companies involved in joint ventures with Russia. The bill takes authority away from the president to suspend sanctions except in specific cases. Since any rapprochement with Russia would have to include a suspension of sanctions, this effectively takes a great deal of control over U.S.-Russian relations out of the hands of the president and shifts it to Congress. This is not unprecedented; Congress did something similar over Iran during Barack Obama’s presidency.

The new sanctions primarily tighten existing ones and extend them to joint energy ventures. It should be remembered that sanctions on Russia were put in place in 2014 in response to Russia’s annexation of Crimea in Ukraine. At the time, there were demands that the West take some sort of military action in Ukraine to block Russia. Sanctions were adopted as a more modest alternative. In some sense they were merely a gesture, sanctioning individuals and particular companies rather than Russia as a whole. The view in the West was that this signaled the West’s will. What it signaled to Russia was a lack of will. Neither side budged, and the sanctions went from interim step to permanent reality. What this new sanctions bill does, as far as the United States is concerned, is cement them into place, addressing the most sensitive pressure point in Russia: its energy industry.

The Russians did not see Ukraine as an isolated affair. They saw the various color revolutions in the former Soviet Union as an orchestrated attempt by the West, and particularly the United States, to surround Russia with hostile governments. They saw the U.S. government acting through nongovernmental organizations to stage political movements under the cover of democratization, with the goal of undermining Russian national security. For Moscow, Ukraine was where the most important U.S. and European intrusion into Russia’s sphere of influence was taking place. The Russians alleged that these NGOs were rigging elections and the political systems in target countries.

The Russians didn’t capitulate to the sanctions – doing so would have only emboldened the United States. Instead, they decided to do what they accused the West of doing in their sphere: They attacked Western political processes. The Russians lacked the ability to organize pro-Russian NGOs of any substance in the West. They chose to respond in a very different way, using social media, hacking and more conventional misinformation campaigns. The goal, as in all such campaigns, was to influence the target political system, or failing that, to destabilize it.

The Russians would of course deny this, just as the West would deny that it was using NGOs for strategic purposes. Nevertheless, when you step back and see how the Russians regarded the West’s behavior in Ukraine, and consider that they would have to respond to that and the sanctions, the destabilization and disinformation campaign was the logical outcome.

This sort of campaign has deep roots in Soviet history under the rubric of agitation and propaganda, or agitprop. The Soviets would send agents to recruit notable figures who would then set in motion organizations consisting of what Lenin called “useful idiots” – people who actually believed the propaganda. Through this they hoped to shape the political discourse – and with luck, governments – in the direction they wanted. Failing that, they hoped to create tension and even chaos in some countries.

Vladimir Putin read the primarily U.S. support of human rights and democratic forces as the American version of agitprop. He had to respond, but his response was not traditional. It involved agitation on the internet, theft and forgery of electronic documents, and the quiet recruitment of operatives. We should remember that one of the Soviet Union’s cutest tricks was to create a framework that made it appear that someone wanting nothing to do with them was actually working for them, leaving the victim discredited.

Was Trump or any of his staff linked to this operation? I don’t know, but I do know that it is both possible that some were, and possible that the Russians have made it appear that they were. Western destabilization campaigns built on NGOs, whose members are oblivious to the strategic purpose they are serving, completely and sincerely focused on their moral quest. Russian operations create a vast realm of uncertainty as to what the truth is. On the internet, they created a world of confusion and enveloped the political system with a similar uncertainty. 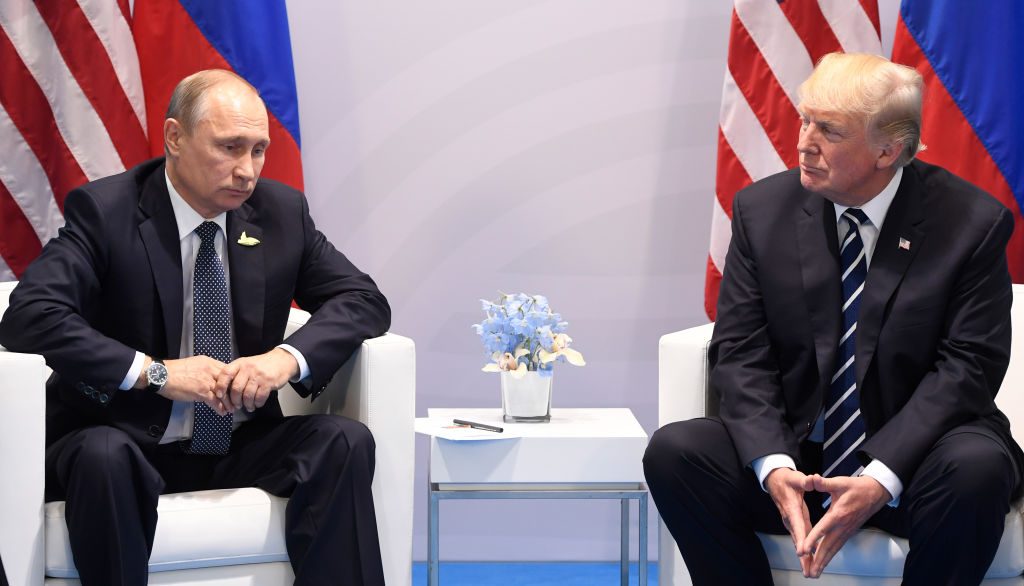 U.S. President Donald Trump and Russian President Vladimir Putin shake hands during a meeting on the sidelines of the G-20 Summit in Hamburg, Germany, on July 7, 2017. SAUL LOEB/AFP/Getty Images

It is difficult to imagine that they had control over Trump, because if they had sufficient information to control him, they would have protected him from any hint of connection to Russia. There are too many trails leading from the Russians to Trump to believe they had him. Phone calls and meetings would not have taken place, and contact with his staff would not have existed. But perhaps the Russians are getting clumsy, and perhaps they were seeking to discredit an American president. At the very least they hoped to generate a movement in the United States that saw Russia as an ally, and end American pressure on them. They didn’t care who was elected, so long as that person was crippled from the start – Clinton through hacked emails, Trump through random contacts by members of his staff with the Russians. In agitprop, real influence is desirable, but sometimes it’s enough to create mistrust within the target country. What matters for Russia is whether the outcome helps it achieve its foreign policy goals.

It is possible the Russians wanted Trump to become president, anticipating he would usher in a softer stance on Russia. Or it may be that they wanted to destabilize the U.S. by making it appear that they were instrumental in making him president. In this maze of mirrors, who can tell? But whatever they were doing, it had an obvious end. First, the Russians wanted the sanctions lifted to eliminate some small part of their economic problems. Second, they wanted the U.S. to stop supporting color revolutions in the former Soviet Union and not even fantasize about staging one in Russia. Finally, they wanted the United States and the West to recognize a Russian sphere of influence in the former Soviet Union, or at least most of it.

They managed to create distrust. But with the passage of this bill, there is the first indication that they have failed not only in permanently destabilizing the United States but also in achieving their foreign policy goals. Instead, they generated a massive systemic backlash, with the House voting overwhelmingly for the bill and Trump having no choice but to sign it. The Democrats supported it because it took power over U.S.-Russia relations away from the president and gave Congress a degree of control. The Republicans voted for it because they could not appear to be soft on the Russians. The president will sign it because all the investigations of Russian-generated chaos raised the question of his complicity with Russia, and vetoing would be politically untenable.

The bill leaves Russia in a worse position than before. The sanctions extend themselves to Russia’s most vulnerable point: They make American participation in Russian energy projects – and in finance – more difficult. As important, because congressional approval is required to remove them, they are mostly locked in place. The U.S. has not eliminated the NGOs on Russia’s periphery, and it has certainly conceded nothing to the Russians concerning a sphere of influence.

Most important, the bill brought everyone together on the one thing the Russians didn’t want: suspicion of and hostility toward Russia. It isn’t fair to say this gambit has blown up in Putin’s face, but it has evaporated major support in the U.S. for a rapprochement with Russia. The group in the Democratic Party that supports entente with other nations excepts Russia. The faction in the Republican Party that wants an understanding with Russia has its hands tied and lives in an air of suspicion. Russia, having played its hand, must now return to reconsider the economic situation in its country, a far grimmer reality than manipulating the world.

Those who believe in vast conspiracies miss the truth, which is that manipulating and controlling millions of people is difficult. People are unruly, and even if they don’t see through you, they tend to go in unexpected directions. Agitprop is better at destabilizing the target than in creating a stable client state or ally. The endless mirrors of the spy novel tend to confuse the spies as much as the targets. In the end, no one knows exactly what is going on, and frequently the engineers of manipulation forget their original point. Whatever the intent of all the propaganda on the internet, all the hacks and all the meetings, the Russians are back where they started, except that getting out is harder now than before. Their effort will leave a long-lasting scar on American society and tarnish its president, but the republic will survive.

Now it is the Russians’ move. Whether they see these developments as a failure is unclear. Whether they hold Putin responsible is similarly uncertain. And whether anyone in the U.S. wants to touch the third rail that Russia has become is doubtful. The Germans have expressed concern with the U.S. sanctions, but they are embattled with Britain to the west, Poland to the east and the United States all over. The next play might be Germany and Russia aligning, but that is a huge step for Germany with very unclear benefits. In the meantime, Russia must consider the frost coming from outside and especially from within.