One of the arguments I have been making about President Donald Trump is that he is neither the devil nor the messiah. In spite of the passions that he has generated on all sides, Trump is merely the president of the United States, and the president is not particularly powerful. What he wants to do is far less important than what he can do.

Trump’s strategy toward the presidency focused on his ability to negotiate. Negotiation skills are important, but a good negotiator must have not only tactics but also power. In business, that power comes from money. In politics, that power comes from the ability to act. Presidents are not good negotiators because they have power only to the extent that they can organize support from the country as a whole, not just from Washington. That means the president is normally weak. 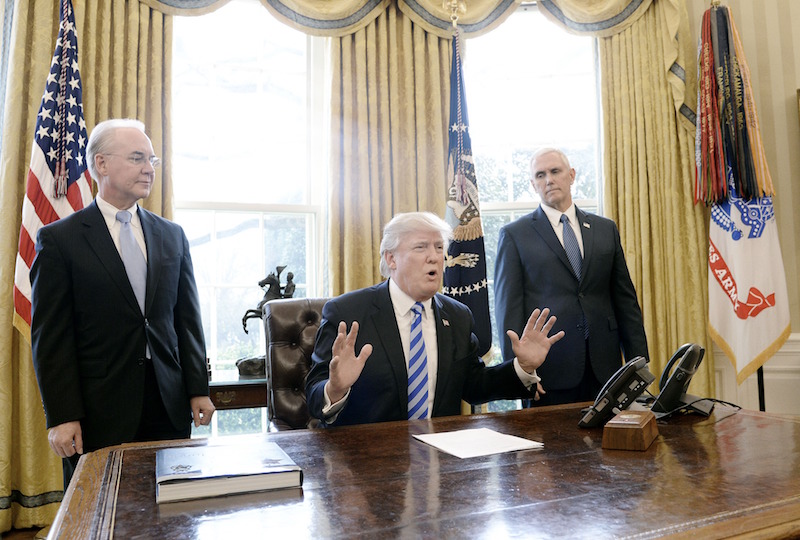 We have seen this play out since Trump’s inauguration. He has been able to reverse some of the executive orders that former President Barack Obama had signed, at least those that the courts had not already repealed. Trump has issued some executive orders himself. However, the most important one has been bogged down in the courts, and now his promise to quickly transform health care has been blocked in Congress.

Some have said that Trump has had a bad month, but in reality, it has been a normal month for a president. The founders did not want a powerful president. The entire point of the Constitution was to avoid despotism, and toward that end, the president’s ability to act unilaterally is severely limited. The Constitution, the federal courts and Congress all limit his power. Congress has the authority to pass or reject the president’s initiatives and to appropriate money to fund them. And that most assuredly means that Congress controls the purse strings of the commander in chief, and therefore is as responsible for war as he is.

In addition, he must deal with civil servants, who are institutionally conservative. They are in charge of implementing the government’s decisions, and they understand the fragility of that implementation far more than senior government officials, who operate echelons beyond reality. Civil servants are often so mired in detail that they can’t see the forest for the trees. Thus, legislation and implementation are not always clearly connected, frequently because the legislation was poorly thought out, and sometimes because the implementers don’t want it to work.

The president must contend with experts as well. They work in and out of government and believe that they should govern, and sometimes do. They normally have contempt for the president’s intellect, unless he appoints them to an office, of course. The experts come from Washington think tanks (a bizarre term if there ever was one), academia, journalism and such (not me of course), and they believe that in a just world they would rule because they are experts. If they disapprove of a president, they can cripple his initiatives by creating doubt in the upper reaches of government. These people know each other well and seek each other’s favors and approval. They are also inherently conservative. Any policy that has been in place for a long time must be preserved and can’t possibly be obsolete.

Despite these groups’ ability to weaken the power of the presidency, we Americans are amazingly passionate about our presidents, whether we support them or not. Congress sees a potential ally or enemy, the Supreme Court pretends to see nothing, the experts see someone who can give them a job, and the civil service sees another irritant who will soon be gone. Yet the American public sees the face of the nation, for good or bad.

The founders knew that the state had to be personalized. That was the point of the monarchy. A state as abstract as the founders envisioned could not survive. The president was to be elected not only by the majority of people but by the majority of states. Every other government official represents a fragment of the country or no one. But the president represents the whole.

We are obsessed with the president because he is the only person in the United States who speaks for the country. But there is a vast difference between speaking for and acting on behalf of the United States. This was Theodore Roosevelt’s point when he spoke of the presidency as a “bully pulpit.” The president, regardless of how many votes he won in the election, is the public face of America. And in a system so complex most cannot fully understand it, the president represents the American government to the people, foreign governments and too frequently himself.

We use the term imperial presidency as if it were a recent invention. But it was always an imperial presidency, as this was our solution for the public’s need for a personality to take responsibility for the government’s actions, though the president had little control over them. The vast system of government continues as it had, out of his sight and mind. And the changes he tries to enact must please not just the people but the other branches of government and the informal layers of power that have developed.

Trump, like most other presidents, thought that he would be in charge of the U.S. government. How, after all, can faceless congressmen or a judge in Hawaii stop someone whose name is on the lips of the world? In short order, presidents realize that they have more power than Queen Elizabeth, but only if they are very skillful in managing the system. Presidents are rarely that skillful. Harry Truman is now very popular. He was not popular when he was president. We remember him as the British remember Queen Victoria. He is a face for a time that seems better than our own, and the details of his presidency, as out of control as any other, are long forgotten.

The president is a symbol designed not to unite us but to define our divisions. Thomas Jefferson, Andrew Jackson, Abraham Lincoln and Theodore Roosevelt all did that. They clarified our differences and set the stage, not for reconciliation, but for the political debate that the founders knew to be eternal. Presidents can be either loved or hated, but by representing the country as a whole, they hopefully limit conflict. But they cannot get things done on their own. Changes rarely happen the way presidents intend.

Iranian and American Strategies After Soleimani