Sign in
Try FREE for a Month!
Log in to your account
Forgot your password? Get help
Create an account
Privacy Policy
Create an account
Welcome! Register for an account
A password will be e-mailed to you.
Privacy Policy
Password recovery
Recover your password
A password will be e-mailed to you.
Home Analysis Daily Memo: US and China Face Off Over Iran, Coronavirus
Iran sanctions. The United States is reportedly considering punitive measures against Iran for delivering fuel to Venezuela. On Wednesday, an Iran-flagged tanker carrying fuel reportedly set sail for Venezuela, despite U.S. sanctions against the country. Venezuela and Iran have tried to circumvent trade restrictions imposed by Washington to keep their economies afloat. As the U.S. tries to scale down its presence in the Middle East, it’s strengthening its use of economic tools against Iran. On Thursday, China rejected a U.S. plan to extend a United Nations arms embargo on Iran that’s set to expire in October. China’s U.N. Mission said the U.S. had no right to extend the embargo and that maintaining the nuclear deal with Iran was the only way forward. The U.S. Treasury also expanded its Global Maritime Advisory, which outlines suggested best practices for private industry to mitigate exposure to sanctions against Iran, as well as Syria and North Korea. Turkey undeterred. Turkey may be on the verge of a currency crisis, but President Recep Tayyip Erdogan’s plans to turn the global pandemic lemon into lemonade are moving ahead. In Syria, the Turkish military established yet another outpost, this time in the al-Zawiya mountain chain in southern […] 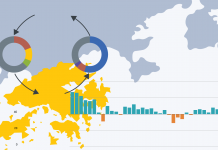 Daily Memo: Antitrust in Europe, Australia Strikes Back at China