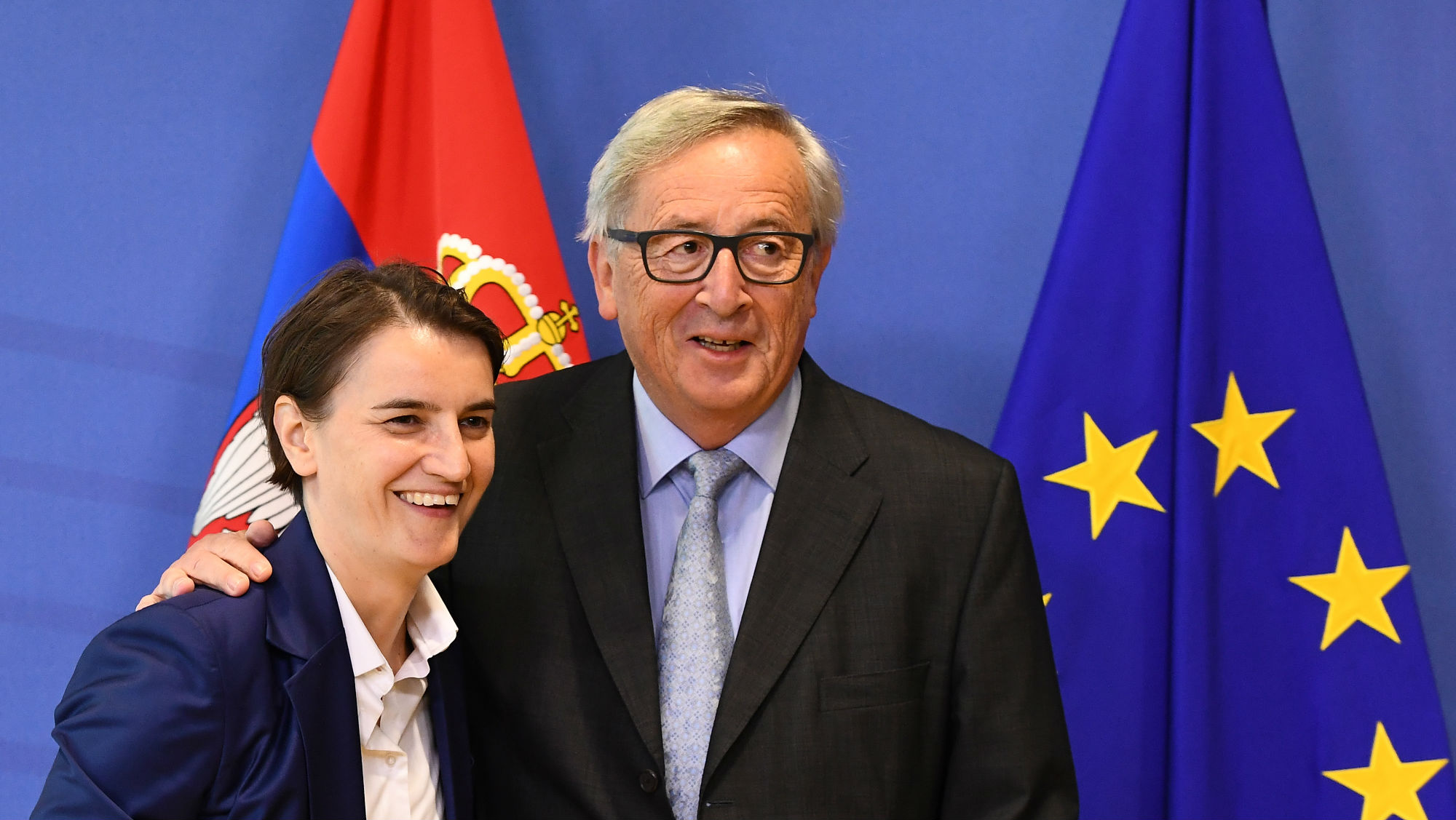 Finally, the EU is getting serious about the Western Balkans. At least, that’s the implication of its new strategy for the region, aptly titled “A credible enlargement perspective for an enhanced EU engagement with the Western Balkans.” Its name is a tacit admission that the old policy, launched in 2003, lacked credibility. The old way promised Brussels’ unequivocal support for the Western Balkans’ accession, but that never materialized (except in the case of Croatia). Missing were solutions to problems like the rule of law, basic human rights, intra-regional cooperation and macroeconomic stability. This time, the EU will coordinate with NATO to increase its influence in the region. In fact, at the same time that Brussels released its new strategy document, NATO was discussing its own enlargement process in the region. Macedonia and potentially Bosnia could receive membership invitations as soon as this year.

The EU has an ambitious agenda for the Western Balkans. First, it wants to secure its help stemming the flow of refugees from the Middle East and North Africa into Europe. Second, it wants the region – the “powder keg of Europe” – to resolve its internal disputes peacefully. And finally, it wants to reduce the influence of Russia and Turkey in the region as much as possible. None of these objectives will be easy, but given Russia and Turkey’s deep historical roots in the Balkans, the third is the most daunting. 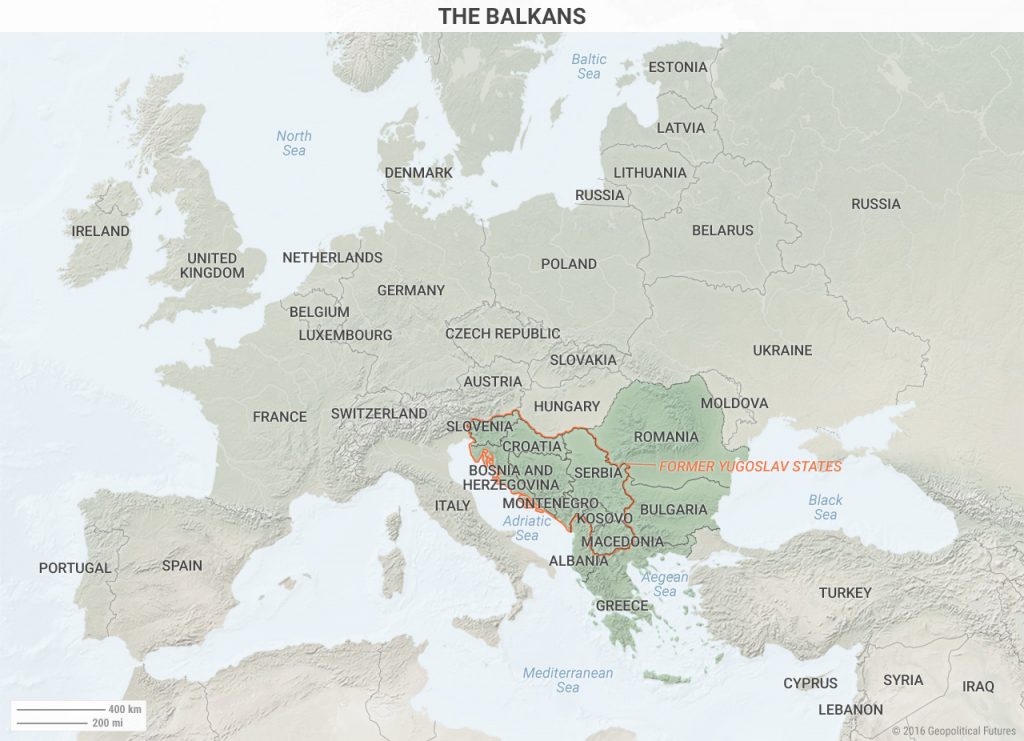 But for the past several years, Russia and Turkey have been preoccupied with their own socioeconomic problems, and therefore their investment (and consequently, their influence) in the Balkans has not been a priority. This has opened a window for the EU to increase its influence by funding the Western Balkans’ development.

This opening is what the EU’s strategy document is trying to exploit. It’s a reversal from Brussels’ stance in 2014, when European Commission President Jean-Claude Juncker said there would be no EU enlargement in the foreseeable future. Under the new policy, Brussels has set 2025 as the target for Serbian and Montenegrin membership. It also pledged “enhanced enlargement” in the region to help prepare the other countries (Albania, Bosnia-Herzegovina, Kosovo and Macedonia) for membership.

Montenegro’s membership was a foregone conclusion once the country joined NATO in June 2017; an unspoken rule among NATO and the EU since the Cold War ended is that membership in one group comes with membership in the other. Serbia, however, may be an exception. It has little interest in NATO membership (though it has improved relations with NATO since 2015, when they agreed on an Individual Partnership Action Plan). But Germany wants Serbia in the EU, which is the same as saying Brussels wants Serbia in the EU. Berlin recognizes Serbia as the most important state in the region because of its strategic location, and so in 2014 it established the so-called Berlin Process to keep ties alive during Juncker’s five-year freeze on enlargement. Germany had hoped that through the Berlin Process, conceived the same year that the refugee crisis began, the Balkan states and the EU would work together to better manage the refugee flows through the region. Progress was slow, however, because there were few incentives for the Western Balkans to cooperate.

The new plan reads like a framework document for Germany’s goals in the region – basically, the Berlin Process – but includes a funding plan for the Western Balkans and a clear deadline for accession: 2025. Of course, nothing is guaranteed; 2025 is a long way away, and a lot can happen in both Brussels and the candidates’ own governments between now and then. But Brussels’ promise – especially in light of its close coordination with NATO (and thus the U.S.) – is a clear message to Russia and Turkey about German and U.S. intentions. Serbia is the key, and the EU hopes that by recognizing its importance, giving it a deadline to work on accession (something Belgrade has long wanted), and promising more development funding, the pro-Western factions in Belgrade will strengthen at the expense of the pro-Russian political forces.

Serbia at the Center

The EU also put Serbia at the center of its policy because it recognizes the country’s critical role in disputes that have become an obstruction to the rest of the EU’s goals for the region. If relations between Serbia and Kosovo and between Serbia and Bosnia were settled, then Kosovo and Bosnia’s own relations with the West could move forward, and it would go a long way toward securing peace in the region. (There is also the fact that Turkey has tried to slowly grow its influence in Kosovo and Bosnia in the past decade, to the West’s discomfort.)

Kosovo declared its independence from Serbia nearly 10 years ago to the day, but Belgrade still does not recognize it. Both the EU and NATO have effectively refused to allow Serbia’s accession talks to proceed until Kosovo’s status is resolved. The three main ethnic groups in Bosnia, meanwhile, do not agree on the country’s future with the West. Though the Croat and Bosnian regions favor NATO and EU membership, Republika Srpska has broadly followed Serbia’s foreign policy, becoming increasingly anti-Western and moving closer to Russia. If Serbia’s EU membership progresses and relations with the U.S. and NATO improve, then Republika Srpska may reconsider its stance as well.

Brussels doesn’t say in its new strategy document how it intends to resolve Serbia’s disputes with Kosovo and Bosnia. Funding projects in Serbia will provide examples of how the EU can help grow the economy in the entire region. Security cooperation to manage refugee flows into Europe will benefit the region’s security forces. But just because Brussels helps the Western Balkans solve the issues of concern to the EU doesn’t mean the countries of the Western Balkans will want to work with one another – the one area that Brussels sees as the key to EU accession.

One thing Brussels’ new policy kept from the old strategy document is that the countries in the Western Balkans must show a level of cooperation and mutual dependency that, in Brussels’ view, fuels economic prosperity and regional peace. The EU and NATO are betting on institutions and the economy to provide the foundation for regional cooperation. But building institutions and strong economies is not the same as building strong nations and societies. Nations are more than their governments and economies. NATO and the EU have missed the nuance. Russia and Turkey, on the other hand, have cultural and historical binds to the region, and they won’t just disappear if NATO and the EU move in.

What We’re Reading: Errors and Uncertainty