The International Monetary Fund (IMF) released a report yesterday in which it increased its forecast for China’s GDP growth by 0.3 percentage points to 6.5 percent. However, the IMF report also warned that “slow progress in addressing corporate debt” posed a risk to the forecast. China has been attempting to dispel such fears. The chairman of the state-owned China Construction Bank said at the Asian Financial Forum in Hong Kong yesterday that China’s system is healthy and out of the woods because the rate of non-performing loans (NPLs) had already peaked. On Jan. 12, business news magazine Caixin reported that a subsidiary of the Industrial and Commercial Bank of China (ICBC), the world’s largest bank, had reached deals with seven Chinese state-owned enterprises to convert approximately 60 billion yuan ($8.7 billion) of unpaid loans into equity shares. In our view, however, the fears expressed by the IMF are warranted. 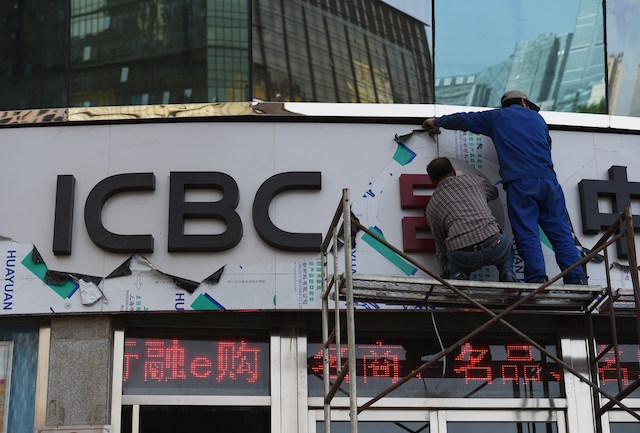 This photo taken on May 5, 2015 shows workers installing a sign above the entrance to a branch of the Industrial and Commercial Bank of China in Beijing. GREG BAKER/AFP/Getty Images

The news about debt-for-equity swaps and China’s claims to be over the worst of its corporate debt problems all sound good until one remembers that it was only in October 2016 that the Bank for International Settlements (BIS) reported that China’s corporate debt was 121 trillion yuan, roughly 169 percent of China’s GDP. The IMF in a separate report the same month noted that the problem wasn’t simply a high rate of growth in Chinese corporate debt since the 2008 global financial crisis, but the fact that corporate profits have steadily declined since 2009 while the leverage ratio has increased.

One of the obvious side effects of such unrestrained credit growth is a rise in NPLs. China currently reports NPLs at 1.7 percent of total loans, but we have always taken Chinese statistics with a grain of salt. Our own bearish estimate on China’s NPLs last March was that the true figure was somewhere between 3 and 7 percent. However, the IMF in the aforementioned report suggests that the number of loans at risk of default is much higher, estimating that non-performing and special-mention loans have risen above 5 percent, while loans potentially at risk account for 15.5 percent of all commercial bank loans to the corporate sector.

The debt-for-equity swap issue has seen its fair share of controversy in China. Last March, Chinese Premier Li Keqiang publicly floated the idea that debt-for-equity swaps could be a key tool in the government’s strategy to reduce risk in the financial system, aid Chinese companies facing “temporary difficulties,” and maintain growth targets. Last May, an article in the People’s Daily newspaper criticized many of the main planks of Li’s plans. The identity of the so-called “authoritative insider,” who was interviewed for the article and eviscerated some of Li’s policy proposals, is still unknown. But it is now generally believed that the “insider” was someone close to President Xi Jinping and that the article was part of a series of moves by Xi to undercut Li’s authority.

In the end, China decided to go forward with pushing debt-for-equity swaps, but with certain conditions attached. China’s State Council published the guidelines for debt-for-equity swaps in October, not coincidentally amid a flurry of reports (including the IMF and BIS reports) that call attention to China’s corporate debt problem. A State Council announcement said that the government-backed debt-for-equity program would be launched “under market principles.” The State Council said it was forbidding “zombie enterprises” from participating; only companies facing the “temporary difficulties” described by Li and those that could demonstrate “long-term potential” would be allowed to exchange their debt for stakes. Furthermore, unlike the last time China engaged in debt-for-equity swaps in the late 1990s, banks would be prohibited from directly exchanging their loans for equity.

China’s State Council says market principles are governing these debt-for-equity swaps. So let’s take a closer look at the companies involved in the program. Two of the companies with which ICBC recently reached agreements are BBMG Corporation and Taiyuan Iron & Steel (TISCO). BBMG is a Chinese cement producer and property developer that saw profits in 2015 fall by 17 percent. Figures available for the first half of 2016 look much better, but only because the first half of 2016 was the height of an overheated Chinese property market, which artificially propped up demand for cement. Now that China is taking steps to rein in property prices, BBMG’s prospects are uncertain at best. TISCO is in a far worse position; it finished 2015 in the red, to the tune of 3.36 billion yuan.

The point is that these are not good investments, and if the market was functioning without government interference, many state-owned enterprises in China would fold because they aren’t profitable. Those investing in the debt of these unprofitable enterprises either have both an extremely high tolerance for risk and an exuberant optimism, or are counting on some other kind of political or financial benefit in exchange for their investment. The propping up of unprofitable state-owned enterprises is a catch-22, because if China lets the companies fail, the Communist Party risks its legitimacy and setting off unrest throughout the country. But not letting the companies fail means continuing to shuffle debt around until the banking system can no longer handle it. The end result will be much the same in both scenarios. Without its high growth rates, China cannot count on economic growth to solve this problem, and unlike Japan, which faced a similar challenge in the ’90s, wealth inequality in China is still extreme. Hundreds of millions of people in China’s interior regions have not enjoyed the same economic advancement as those on the coast. Eventually, some sectors will have to pay up.

There is an irony that should not be lost in this debt-for-equity swap plan that China’s State Council published and that China’s five main state-owned banks are now executing. We have concluded that Xi’s control over the state’s levers has increased markedly in the last six to eight months, which means support for these debt-for-equity swaps must be coming from the top. It also certainly means that the emphasis on “market principles” is coming directly from the top as well. Yet this is the same Chinese president who in front of a large crowd of Chinese Communist Party officials last May said, “turning our backs or abandoning Marxism means that our party would lose its soul and direction.” Xi is trying to reinvigorate the communist ideology of the party, and yet the medicine he is prescribing for China’s corporate debt problem is based on free market principles. The disjuncture between ideology and constraints is rarely so obvious.