We are at a moment when all the pressures that have built up over the months and years have finally begun to tear the global system away from its familiar map, to a very different place, as our model predicted. There is much to tell, but for today I will mention only three countries: China, Saudi Arabia and Germany.

Let’s begin with the moment the post-Cold War world ended, in August and September 2008. In August, Russia went to war with Georgia and all the assumptions about what Russia had become were proved wrong. In September, Lehman Brothers collapsed and the assumptions about the post-Cold War global economy, in which the United States, China and the European Union were the immutable pillars, proved simplistic. The seven weeks in 2008 between the war and the collapse were like a serious heart attack from which the patient never fully recovers, but lives on as well as he can. The consequences of the Russo-Georgian war are still playing out in Kiev and Damascus, Warsaw and Washington. The consequences of Lehman Brothers’ collapse, of the financial crisis of 2008, have been slowly playing out over the last seven years, but have now come to the fore.

As I have written before, 2008 kicked off a crisis of exporters. From 1991 until 2008, the accepted wisdom was that the more efficient the exporter, the stronger his economy. This was true, as many things are, until it was no longer true. The exporter is only as strong as his customer’s appetite and ability to buy what he sells. When that fails, what had been seen as strength becomes weakness.

The recessions in Europe and the United States were the first step in this shift. They hurt China’s ability to export enough to disrupt the stable functioning of its economy, which had been built to expect massive inflows of cash. This ate away at China’s economy for years, as the Euro-American appetite for Chinese goods never quite returned and new competitors emerged that undercut Chinese prices. China’s growth rate declined, and with it, its consumption of industrial minerals. The producers of these minerals lived in a fantasy world where they refused to recognize that 2008 had diminished the appetite for Chinese industrial products. The illusion kept commodity prices high until it could no longer be denied that China’s industrial output would not require the fantastic amounts of minerals that had held high the prices and hopes of the oil markets, for example. Then reality set in, as world oil supplies increased and the price of oil and industrial minerals collapsed. 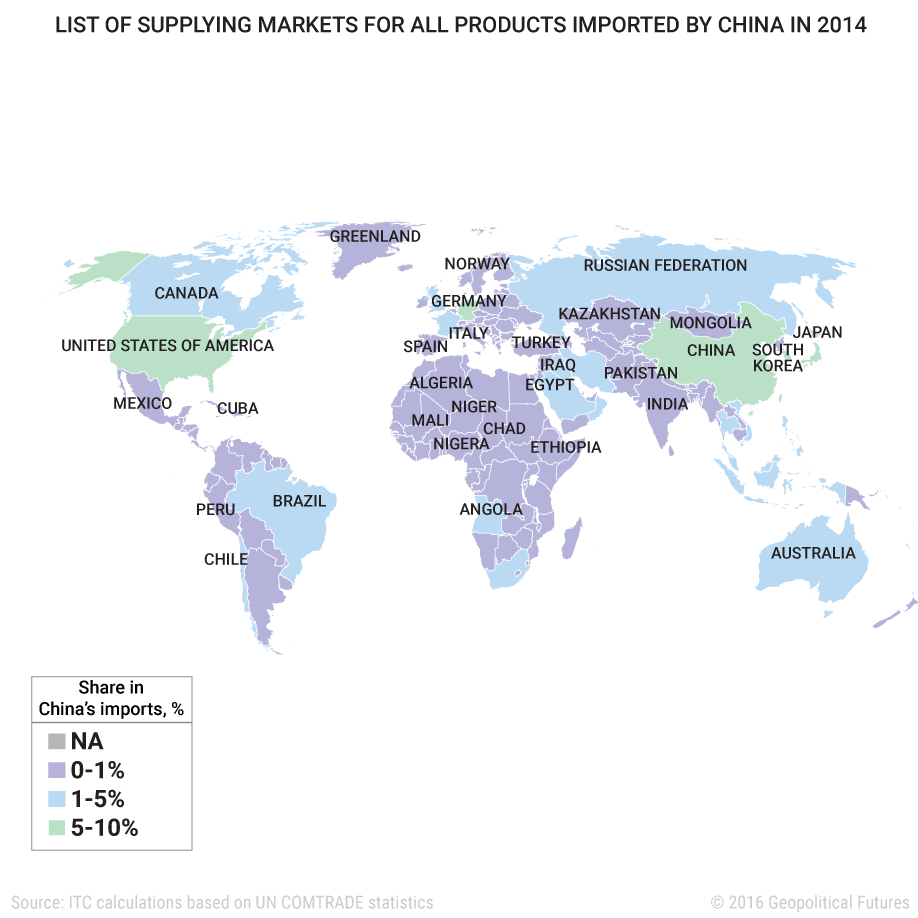 All exporters – but first those who sell products to Europe and the United States, followed by suppliers of raw material – faced a long-term degeneration in their positions that, while it has not destroyed them, has caused them to change the way they operate and compelled them to face their mortality. As with many illnesses, there is a day when reality must be faced and, in many ways, yesterday was that day.

The People’s Bank of China announced that in 2015, their foreign reserves declined for the first time in 22 years. The steady growth of foreign exchange capital, for which the Chinese had no immediate need or even use, had defined the Chinese economic miracle, as it had defined the Japanese economic miracle before it. China today announced that this is no longer the case. It has not been the case for some time, but the tests finally came back; the disease is no longer deniable. Fortunately for China, it still has $3.31 trillion in reserves as of Dec. 31, although a trillion dollars is not what it used to be. It means that China must go on a diet, and the question is now political: who will be forced to consume less, who will be permitted to consume more? The panic in the Chinese markets this week and the massive capital flight that has taken place for several years were the response to and the anticipation of the news. The Chinese purges of corrupt officials are the first course of treatment.

In Saudi Arabia yesterday, Deputy Crown Prince Mohammed bin Salman announced in an interview with the Economist that Saudi Arabia was considering selling shares of Saudi Aramco to private investors. Saudi Aramco was fully nationalized in 1980 by a Saudi government swimming in petrodollars due to massive hikes in oil prices – prices that it could command because of the Organization of Petroleum Exporting Countries’ powerful position and the lack of alternatives available to oil importers. Nationalizing Saudi Aramco was a triumph for Saudi Arabia in two ways. It put the Saudis in the leading position in the Arab world (pushing aside the secular, socialist Nasserites) and for the first time since the Ottomans, they were the sole owners of their own key resources. They were no longer owned by Europeans or Americans.

Therefore, announcing that the centerpiece of the Saudi system may be put up for sale, besides being shocking, reveals two things. First, the Saudis need money. They maintain their kingdom through lavish spending. With oil prices what they are, something has to be sold to raise enough money to continue. Second, the Saudis do not want all their assets tied up in oil if oil prices remain low. The upside may not be there. So selling part of Saudi Aramco and buying other assets makes sense.

It also means that Saudi Arabia is shifting away from the reality in which it has operated since 1973, toward a new model where the assumption that an oil-based economy will solve all problems no longer holds true. This is on the same order of magnitude as the change that China is making. China used to depend on its efficiency in producing exports. Now it will have to find a new way to operate. Neither China nor Saudi Arabia can depend on the economic model it had adopted. Recent events haven’t created this reality, but have merely made it obvious.

This opens up a unique position for another massive exporter: Germany. Germany is the fourth largest economy in the world and almost 50 percent of its gross domestic product comes from exports, half of which go to Europe and half to the rest of the world. It is even more dependent on exports than China was. And many of its exports can’t be tracked. They are components that are part of an extended and complex supply chain. It is hard to tell who the final customer is. So far, German economic growth has slowed but has not yet declined. That tells us that the story is not over with China and Saudi Arabia. There is a final class of economies – massive exporters in relatively well-balanced economies – that still have not had to face the crisis. Of these, Germany is the leading figure. And if the fourth largest economy in the world, a country that cannot absorb all it produces, moves into economic crisis and must change its behavior, the cost will rival that of the shifts we’re now seeing in China and Saudi Arabia.