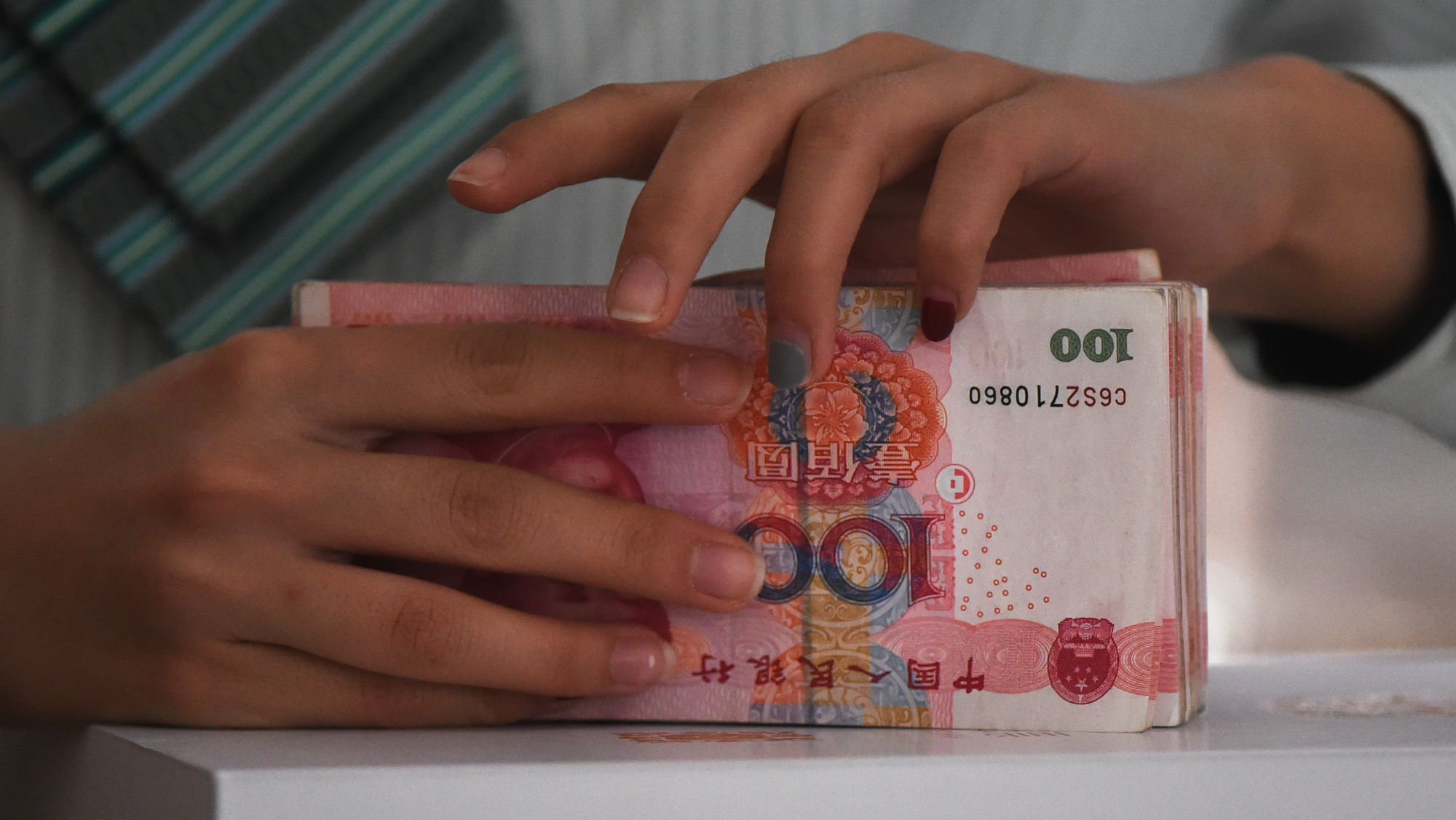 The level of debt owed by African governments in countries such as Kenya, Uganda, Mozambique, and Tanzania has increased markedly since the 2008 financial crisis. Problematic though sub-Saharan African debt may be, debt levels vary country by country and therefore mitigate the possibility of a continent-wide crisis. Still, widespread default could create opportunities for outside powers that covet the region’s natural resources.

In the wake of the 2008 financial crisis, global interest rates were low, and money was cheap. Investors who sought greater returns turned to riskier investments, including African sovereign debt. Countries across the continent took on debt to fund infrastructure and other development projects. Countries such as Nigeria and Botswana still have debt burdens of under 50 percent of GDP—the level at which debt is generally considered high for developing countries. Other countries such as Mozambique and South Africa have debt burdens of more than 100 percent of GDP. Median public-sector debt in sub-Saharan Africa was 48 percent in 2016. 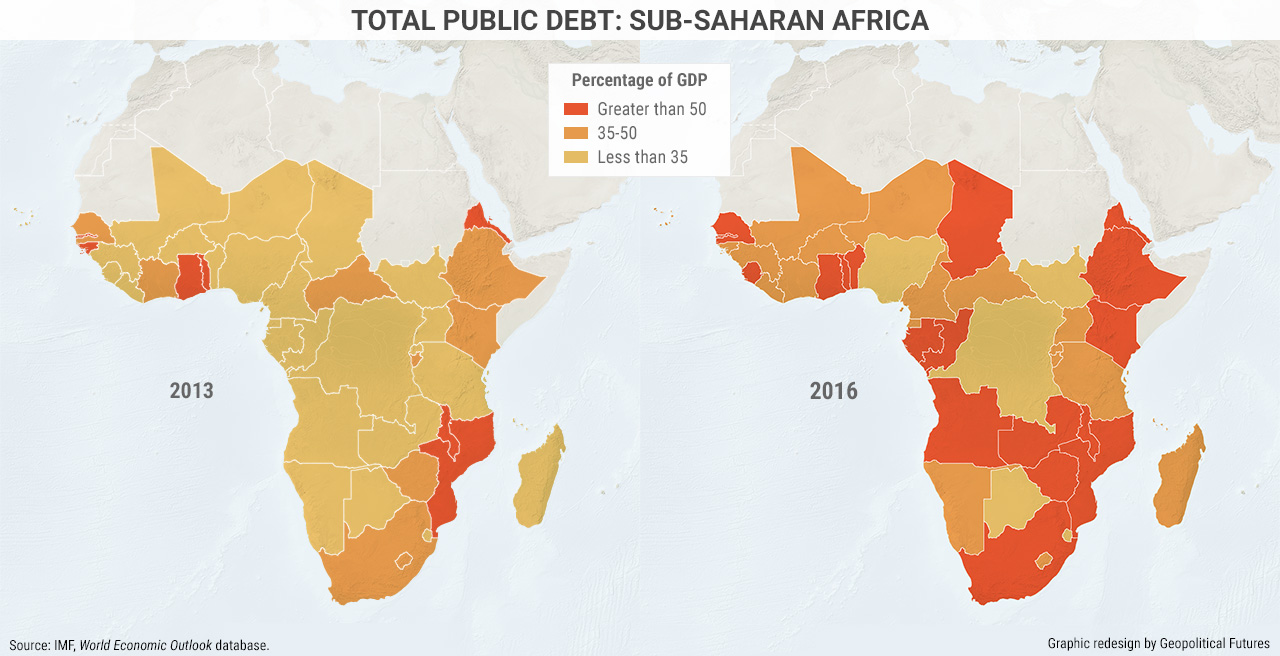 The current situation resembles the African debt crisis of the 1980s. In the time leading up to the debt crisis, many sub-Saharan African countries similarly took advantage of lower interest rates and took on more debt. When Western central banks raised interest rates to combat inflation, the cost of servicing this debt grew. The fact that many of the loans were denominated in foreign currencies made things worse. When interest rates in the United States went up, the dollar appreciated relative to local currencies in sub-Saharan Africa, making repayment even costlier. Meanwhile, the price of the commodities on which so many of these countries depend fell, decreasing the amount of money they had to pay back their loans.

Over the past 10 years, amidst an environment of low global interest rates, African governments have likewise accumulated more debt. As the US and EU economies recovered, central banks have begun to raise interest rates. As much as 70 percent of this debt is denominated in foreign currencies, according to S&P, though the figure is much lower for Nigeria and South Africa, which together constitute a large portion of total sub-Saharan African debt. A decline in global demand for commodities—say, if China were to enter a recession— would once again put pressure on these government revenues, many of which are still dependent on natural resources. 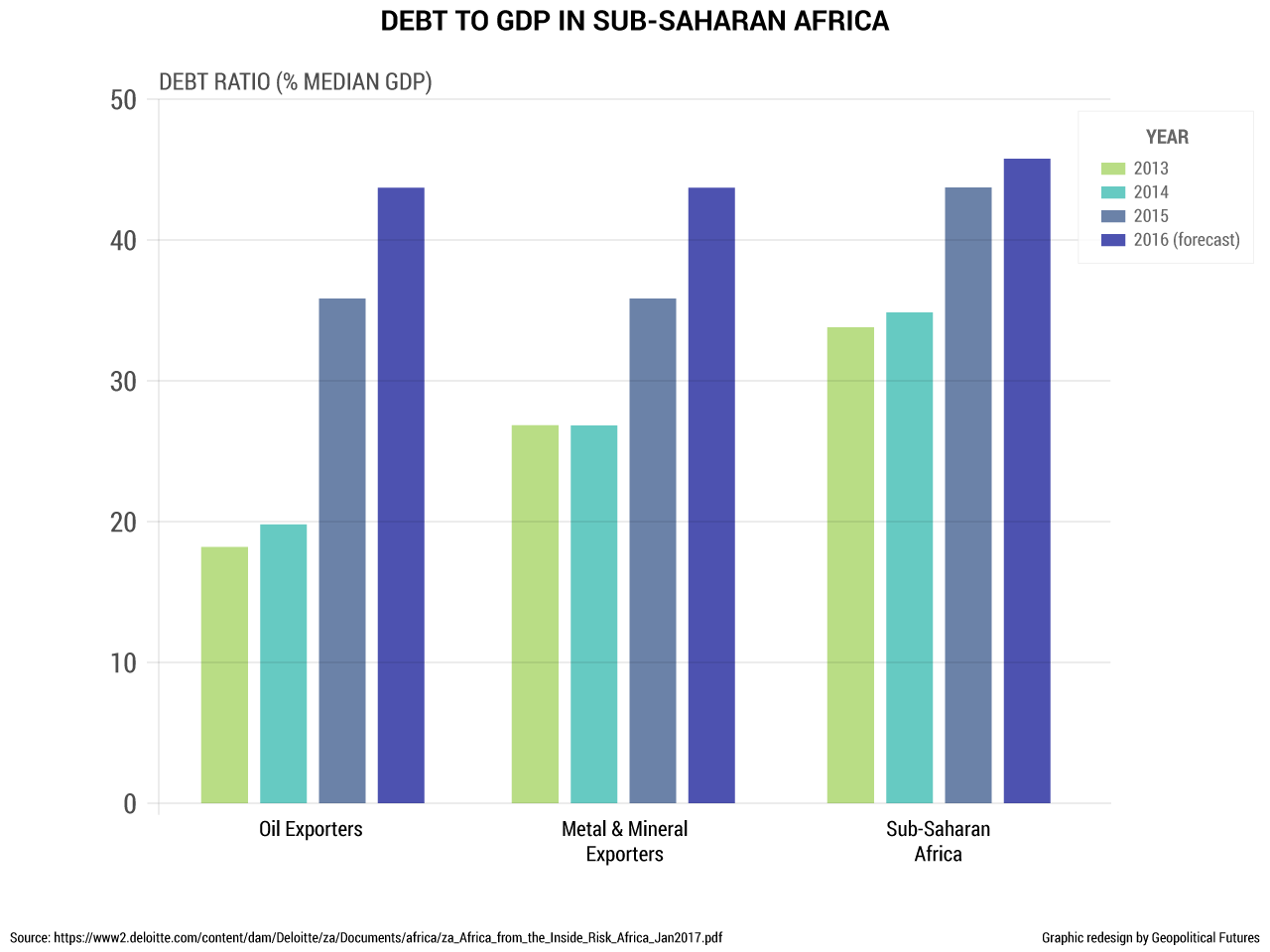 There are two important differences, however, between Africa’s prior debt crisis and its current one. The last one was fueled by a greater share of concessional debt—that is, debt loaned by the International Monetary Fund, the World Bank, or other multilateral institutions that generally have better-than-market terms for the borrower. Today, more of sub-Saharan Africa’s debt is private debt (roughly $325 billion of $450 billion total debt, according to S&P).

The second and more important difference is that China was not a major power in the 1980s. China’s remarkable industrial growth has required an equally remarkable amount of natural resources for fuel. So, China has been investing more capital in Africa through vehicles like its Export-Import Bank, building infrastructure, and developing trade relations.

China has used a form of financing that functions like a bartering system: In return for investment capital and infrastructure development projects, some sub-Saharan African countries grant China resource concessions. (Such was the case with the Sicomines copper project in the Democratic Republic of Congo and in various oil projects in Angola.) The arrangements differ. Sometimes Chinese entities take an ownership stake in the newly constructed infrastructure project. Sometimes loans are secured against resources as a form of collateral. Sometimes debt service is paid in resources instead of money. But just because a loan is backed with an asset—in this case, commodities—doesn’t mean loans can’t turn sour if the borrower struggles to extract or sell enough of its natural resource to service the debt. These terms can also leave the borrowing country with little left over from their commodity production to generate their own revenue. Angola and Congo have both encountered this problem.

This kind of financing enables China to invest in places such as Congo, Eritrea, Guinea, and Zimbabwe—countries where the rule of law is relatively weak. And it has a certain logic to it: If a lender needs to be repaid in currency, it needs to ensure that the borrower remains solvent. If a lender is willing to accept payment in the form of a commodity that it can reliably measure, then it can lend to borrowers with riskier credit profiles.

Still, these types of deals are fairly rare, the media’s over-reporting on them notwithstanding. Estimates vary wildly—data on Chinese financing is scant and must be collected indirectly—but a report written in 2016 by Deborah Brautigam, a professor of international political economy at John Hopkins, estimated that Chinese banks, contractors, and the government lent approximately $86 billion to Africa between 2000 and 2014. About $29 billion of that was loans backed by natural resources.

That’s not such a large amount, considering it covers a 14-year period and nearly 50 countries. In terms of foreign direct investment, China still spends less in Africa than the United States, the United Kingdom, and France, whose FDI stocks in Africa were $64 billion, $58 billion, and $54 billion, respectively. (However, Chinese investment accelerated more quickly than the others between 2010 and 2015.)

Africa is a minor player in geopolitics. Unfortunate as it may sound, its relevance stems from how stronger countries interact with it and manipulate it. So while its current indebtedness may not shape the course of international affairs directly, it may, in fact, benefit China. Defaulting on their debt would cause foreign investment to dry up. China’s willingness to accept repayment in commodities would leave it as one of the few remaining options for countries struggling to build infrastructure. Beijing could, therefore, drive as hard a bargain as it wanted. China will continue to mine Africa for its resource needs. The only thing that will constrain its behavior in that regard is its own capital needs. It will, in other words, have to determine how much to spend as its own economic problems continue to mount.

Were this to transpire, it’s possible that China’s rivals, noticing how much Beijing benefits from its relationship with Africa, would begin to follow suit, generating a renewed Great Game competition on the continent. This could take the form of other resource-dependent countries that are opposed to China, such as Japan, seeking similar quasi-barter deals on the continent in exchange for secured access to commodities.

But what is possible is not particularly likely. A debt crisis would have social implications that would make doing business extremely difficult, limiting the upside to China and decreasing the likelihood of other powers opting to compete with it. Even if it did, the arena would be peripheral to great powers’ core interests. Unlike the colonial economies of the 17th–19th centuries that drove European competition in Africa among other places, the scale of modern-day economies and their supply chains rely on a global market rather than sequestered mercantilist ones. China’s presence and influence in Africa is real, but in terms of global geopolitical consequence, it is likely to remain limited.

The US Narrows Its Focus in Southeast Asia