In my latest book, “The Storm Before the Calm,” I predicted that the U.S. would go through a massive social crisis in the 2020s. That prediction has obviously come to pass. I also forecast that America would go through its fourth institutional crisis. The previous three all followed existential wars and transformed the governing institutions.

We are now 80 or so years removed from World War II, and the nature of this new institutional crisis is becoming clear. It started when the COVID-19 pandemic revealed how ineffective a federal technocracy is in imposing solutions over a vast and diverse continent. As I argued in “The Storm Before the Calm,” experts are essential but insufficient when it comes to governance. Their fundamental weakness is that expertise in one area can be insensitive to or ignorant of the problems their solutions create. Medical institutions did the best they could do under the circumstances, but their solutions disrupted the production and distribution of goods and alienated people from one another. Governance is the art of seeing the whole. Physicians tend to see only their own domain. The federal government responded to expertise in one area without creating systems of competing expertise, and it often failed to recognize the variability of circumstances that the founders envisioned.

Now another important dimension of the institutional shift is taking place: the crisis of universities. Universities have been central to the moral functioning of the United States since Thomas Jefferson required that all new states admitted to the republic fund universities. He saw them as essential in the cultivation of expertise and in creating an educated elite armed with varied knowledge essential to the regime. Over time, universities, and especially elite universities, tended to exclude prospective students and teachers who were not already part of the elite, and thus tended to suppress ideas offensive to elite values.


The GI Bill disrupted the system by welcoming soldiers into universities regardless of background. Many of them already had elements of technical expertise, thanks to their time in the armed services, and they knew too much about life not to doubt the self-certainties of their professors. This development helped create a massive professional class with highly specific areas of knowledge. That notion of expertise fed the emerging principle of government. It accepted diversity as a principle, except that its proponents weren’t always aware of, let alone concerned about, those their definition of diversity excluded. The university was therefore the pivot to the elite. It always develops cultural idiosyncrasies that overlay its function, but it also remains a foundation of the institutional structure. The university has again developed strange dynamics, but it has also developed in a direction that is deeply linked to the federal system. The problem is that students must take out outlandish loans to pay for the outlandishly high price of higher education. Given the existence of a federal lending program that linked available credit to the cost of education, universities had little incentive to control costs. The lending program was linked to cost, and the cost could rise because the available loans, in general, increased in tandem.

At the time that I wrote “The Storm Before the Calm,” student debt stood at about $1.34 trillion. This was roughly equal to the amount borrowed by subprime homeowners prior to 2008. A massive default on student loans would create problems at least on the order of the subprime mortgage crisis. The government control system was used warily, not wanting to upset an unqualified class of borrowers for political reasons or lenders who were reaping substantial profits before the collapse. The government wanted to be as inclusive as possible; it couldn’t risk excluding an “unqualified” class of people from borrowing, and it wanted to take advantage of the large constituencies endemic to large universities. The debt burden assumed by students was staggering, and universities kept increasing costs, and thus increasing the debt, hoping to ride the train as long as they could. The recent decision to bail out students, then, is the least of the issues. How the government allowed the situation to get to this point is the issue.

Ohio State University charges $23,000 a year for in-state residents, including room and board. Harvard University charges nearly $100,000 per year. These prices (which do not include financial aid outside of loans) reached this level in 2019 on an intensifying curve, a curve made possible by the government acting like a subprime lender. The likelihood of repayment was questionable at best, but it went on anyway.

Why is college so expensive to begin with? First, there is the lavish campus replete with things like tennis courts and other features disconnected from education. I went to the City College of New York many years ago, when it was bare bones but sported superb professors. I then went to graduate school at Cornell. I loved it and still love going back. The campus is beautiful, and seeing the Finger Lakes and hearing the chimes is a great pleasure. But the fact is that the land on which Cornell is situated and the buildings are worth a fortune, and the pleasure I got from this did not address the fact that professors are essential to a university and the rest is marketing to get students to spend their borrowed money there rather than elsewhere. Columbia University is in Manhattan, some of the most expensive real estate in the world. If it sold its facilities there and moved to let’s say Queens, with the money placed in a trust, it could lower the cost of tuition dramatically.

The university has become a central part of the social crisis demanding fealty to values rather than inviting debate over those values. But that’s a discussion for a later date. The student loan crisis is the result of a major institution running out of control with the tacit permission of the government. This was partly political in that borrowers had parents, and parents voted. But there was a deeper problem: The experts running the student loan system focused on the benefits of education without measuring the costs. Those charged with charting the development of the economy had as their constituency banks, which, of course, love loans.

The basic argument in my book is that technocracy is built on experts, and that experts, while necessary, tend to have a narrow focus. To lack generalists is to lack common sense, and a lack of common sense gave us another train wreck, one that will end with a transformation of how government works.

It should be noted that the systemic shifts of the past required major wars to compel change. All were existential in the sense that the republic was at stake. The war in Ukraine does not have that much weight for the United States. With only three prior institutional shifts, we don’t have enough examples to be certain war is required. Or there is a nasty one coming.

The Crisis of the University and the Liberal Arts 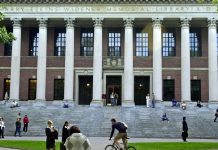 American Universities Are in Crisis