The price of Brent crude fell to less than $32 per barrel on Jan. 11, pushing the value of the Russian ruble to 13-month lows. Meanwhile, in an extensive interview with German newspaper Bild, Russian President Vladimir Putin conceded that decreasing energy prices have led to “dangerous revenue losses” on Russia’s oil and gas exports. In the interview, despite repeating long-held grievances against NATO, Putin adopted a conciliatory tone toward Germany (one of Russia’s top trading partners) and noted that Russia rushed to France’s aid in the fight against terror. Putin is aiming to revive relationships in Western European capitals—especially in Berlin—as the prestige of Moscow’s involvement in Syria erodes and as the Kremlin faces a growing risk of instability at home.

On Nov. 26, following the terror attacks in Paris earlier that month, French President Francois Hollande met with Putin to discuss cooperating in the fight against the Islamic State. Russia had begun conducting airstrikes in Syria two months earlier, in support of the Bashar al-Assad regime, and this limited intervention in the Syrian conflict was designed to both enhance Moscow’s prestige as a military power and give the Kremlin extra leverage in its negotiations with the United States and Western European governments, especially pertaining to Ukraine.

However, Russia’s force in Syria is relatively small, and can only offer defense against the rebels and limited support for the regime’s offensives. Russia is unable to commit significant new resources to the Syrian battle, and any prestige Moscow may have received is reaching the point of diminishing returns. At the same time, the German government has become increasingly preoccupied with the refugee crisis at its doorstep, shifting its focus toward debates over the intake and integration of refugees and away from the root of much of the crisis — the fighting in Syria.

For Russia, reaching out to Germany is designed to convince the European Union’s largest economy to reduce or altogether lift sanctions. In fact, Putin may be using Germany’s preoccupation with the refugee crisis and growing pressures on the government in Berlin to get German support for better terms when it comes to the status of Ukraine. As Berlin focuses on internal stability and safeguarding the future of the eurozone and the European Union amid several interlocking crises, it does not have the will or capacity to take an assertive stance on Ukraine.

At their core, much of the Kremlin’s moves — whether wooing Western European governments or staging high-profile military interventions — should be seen through the prism of Russia’s growing weaknesses. Russia’s budget for 2016 was formulated under the assumption of oil prices at $50 per barrel and even then still required significant cuts. Low oil prices are increasing the risk that the Kremlin will break its social contract with the Russian population, raising the specter of a weaker Russia and domestic instability.
Russia is a vast land mass that has always been difficult for Moscow to control. In order to maintain power and legitimacy, the Russian government uses a mixture of coercive power, patronage relationships with local and national elites, and an informal social contract that involves the distribution of services and resources to the population.

According to the latest opinion polls, Russians are largely confident that Russia will remain stable in 2016. When asked by the independent Levada Center whether there will be mass discontent and protests in the coming year, only 27 percent of Russians thought this was probable, and a mere 4 percent replied that they believe there will definitely be such disturbances. But these numbers mask another reality.

Russians do care about their country’s prestige abroad, and Putin remains personally popular, but ultimately ordinary Russians care most about economic stability and the access to government services and benefits that stability affords. Over the past two years, Russians have grown highly worried about the state of the country’s economy. The same Levada poll found that 36 percent of Russians believe an economic crisis similar to the one in 2008 was likely this year and another 11 percent believe such a crisis would “definitely” occur. Nearly a majority of Russians, therefore, are starting their year with the expectation of major economic problems — fewer than in 2015, when 62 percent expressed concerns regarding the economy, but much higher than any previous year since Levada began asking the question in 2006. 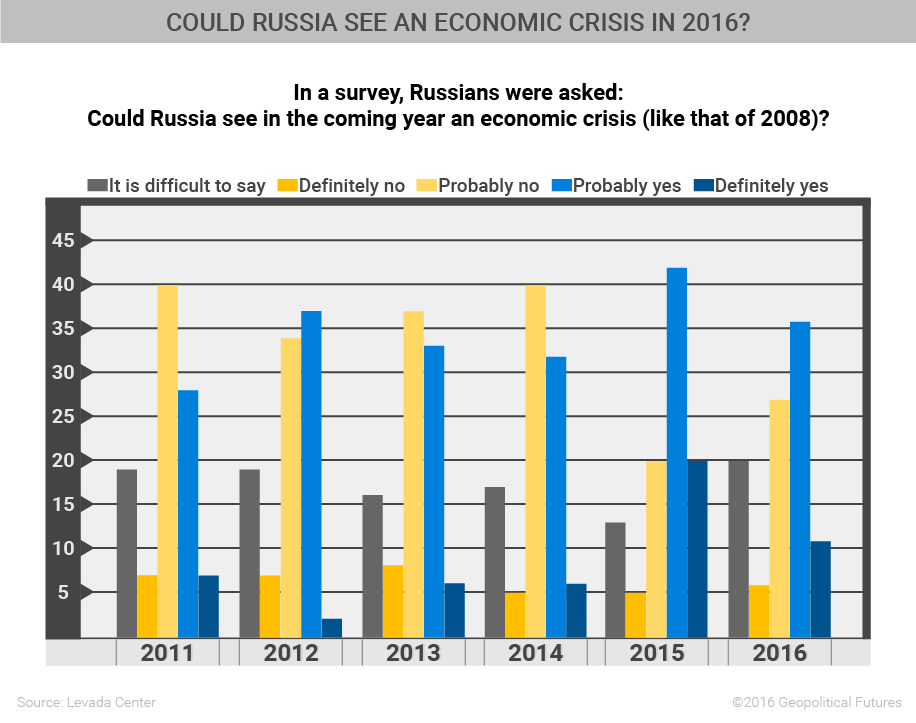 It is no coincidence that economic problems that affect the daily lives of Russians have contributed to every regime change in Russia over the past century. Before the Russian Revolution broke out in 1917, the country was experiencing inflation, food shortages and low wages. Similarly, the Soviet Union’s economic problems were accentuated by Gorbachev’s reforms before its collapse. This does not mean that economic difficulties always lead to regime change — the people of the Soviet Union underwent significant hardships, especially in the USSR’s first decades, without toppling the regime. But the Soviet Union was different from today’s Russia. Soviet power depended greatly on the security services and the Communist Party. And while today’s Russian regime does use coercive measures, it relies more fundamentally on its social contract with elites and the population to maintain power. It does not possess the kind of political or internal security apparatuses that the Soviet Union did for much of its history.

In 1905, in what later became known as “Bloody Sunday,” workers in St. Petersburg marched to present a petition to the tsar, asking for political reforms and better wages. When the tsar’s soldiers opened fire and killed 200 marchers, the legitimacy of the tsar was forever tarnished. The Russian government today is aware that even though it has a security apparatus at its command, and even though it has successfully undermined opposition and protest movements in the past, there is a line that, if crossed, could undermine even Putin’s popularity.

As Russia weakens, so does the government’s ability to fulfill its end of the social contract. In the short term, we can expect further budget cuts and some protests. But as Russia uses more of its financial reserves and world energy prices remain low, it will be slowly destabilizing. A weak Russia may reach out more to wealthier European countries like Germany. However, the danger is that a fearful Kremlin may try some desperate moves abroad, becoming more aggressive externally as it weakens internally.