Michael Roth, Germany’s Minister of European Affairs, made some striking comments about the United Kingdom’s relationship with the European Union yesterday. Roth said, “Given Britain’s size, significance, and its long membership of the European Union, there will probably be a special status which only bears limited comparison to that of countries that have never belonged to the European Union.” This contradicts the previous official German position on what will happen when the U.K. eventually triggers Article 50 and begins the formal process of leaving the European Union, and underscores just how overblown the ramifications of Brexit have been.

German Chancellor Angela Merkel has been quite clear formally that the EU should take a firm stance in future negotiations with the U.K. Speaking to the Bundestag shortly after the U.K. voted to leave, Merkel made it clear that the vote meant that the U.K. had left the “European family” and that it would receive no special treatment, nor would it be allowed to “cherry-pick” the privileges it wanted to retain. European Commission President Jean-Claude Juncker was even more frank on the eve of Britain’s vote, saying simply that there would be no future renegotiation with the U.K. – “out is out.”

There was a great deal of hyperbole both in the media and in the words and actions of politicians surrounding Brexit. Those supporting “remain” in the U.K. pointed to government studies saying that leaving would result in immediate and catastrophic consequences for the British economy. Donald Tusk, the current President of the European Council, actually suggested that Brexit was a harbinger not just for the destruction of the EU, but for “Western political civilization.” The idea that Great Britain’s vote meant that the U.K. would turn its back completely on Europe and that Brussels and London would not find common ground on which to work out a relationship is similarly preposterous.

Despite the rhetoric, the U.K. is part of Europe whether it wants to be or not. Great Britain can no more ignore its connection to Europe today than it could ignore Europe’s “hatred and its armaments” in 1934. Over 40 percent of British exports go to the European continent. Almost 12 percent of Britain’s GDP comes from the financial sector, and London’s role as a European financial hub is a crucial part of that. Besides economics, anyone familiar with British history also knows that conflict on the Continent will inevitably threaten to cross the English Channel. Even if Great Britain is changing the terms of its relationship with the European Union, it remains intrinsically linked to Europe: politically, economically and militarily. The U.K. will leave the EU. It will never leave Europe.

It is also true, however, that when it comes to the economics of it, Europe needs the U.K. No fewer than nine different EU member states rely on Great Britain for more than 5 percent of their total exports. For Germany, whose economy is completely dependent on the exports, the U.K. is not just its third largest market (7.4 percent of all exports), but also its parachute. Demand for German goods in Europe and in China has slowed, and it has been the U.S. and the U.K. that have picked up the slack thus far. Merkel said essentially that Great Britain will not be able to choose its terms in negotiations with the EU. That is a negotiation tactic. The fact that Merkel even had to say it is indicative of just how weak Germany’s, and by extension the EU’s, position is. 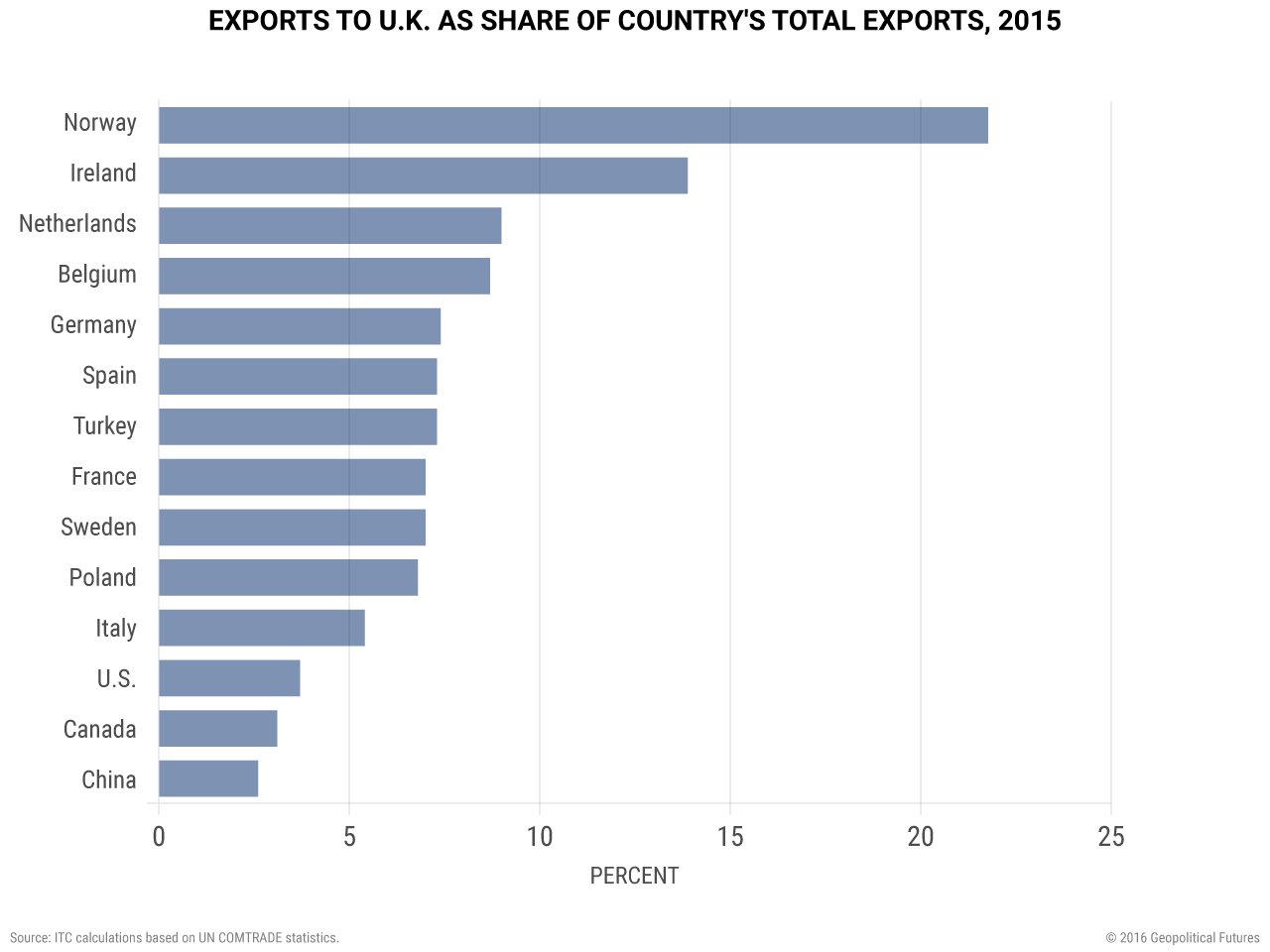 The oddity in all this is why a junior partner in Merkel’s governing coalition would come out now and make comments that so directly contradict previous German statements and reactions to Brexit. Roth is not a very important figure at the moment, though his star is on the rise in the Social Democratic Party. But German Foreign Minister Frank-Walter Steinmeier sometimes relies on Roth to voice not quite official ideas. Steinmeier’s overall tone on Brexit has been less strident than some of his German counterparts; last month he said that cooperation with Britain in Europe’s current moment of crisis was indispensable.

One potential explanation is that the Germans have accepted the inevitability of Brexit. At first there were calls within Britain to hold another referendum, and then doubts about whether London would actually trigger Article 50 at all. New British Prime Minister Theresa May has thus far been coy about precisely when she plans to invoke Article 50. All she has said is that she will not do it this year. The BBC reported that it is widely believed she will trigger Article 50 at the beginning of next year. The Sunday Times meanwhile said over the weekend that Autumn 2017 is the new target for enacting Article 50. Either way, it is doubtful that the U.K. can or will ignore the results of its referendum.

With this in mind, Germany would prefer to rip the bandage off rather than let the situation fester in ambiguity. This is the part of Roth’s comments that have gone less emphasized: that the process of Britain’s exit should start early in 2017. Brexit is going to happen; the only question now is whether it happens in 2019 or 2020. All things being equal, Germany says the sooner the better.

The tenor of the conversation is moving away from denial toward how to accomplish Britain’s exit in the shortest time possible and in a way that is best for all sides. Since Merkel has come out strong against any concessions to Britain and has a domestic constituency that supports that position, Germany’s new position is being communicated publicly on a more junior level. It allows Merkel to begin the process of saving face but also gets the message across.

That message is one that we have been writing about for some time. Brexit or not, Great Britain was and will remain a European country. That fact has always been more important than all the various political statements that have been and will be made about Brexit. What’s new is that Germany is signaling that it has accepted that and is done with the atmospherics. Better to end the political melodrama and get back to work.

Daily Memo: Protest at the US Capitol

FRIEDMAN: Energy Prices Will Hit These Two Nations Hard in 2017...