The pilots who were involved in shooting down a Russian aircraft in November that briefly intruded on Turkish airspace have been arrested by Turkish authorities. A Turkish official said the arrests were in connection with the failed coup. With this, one of the main outcomes of the coup attempt is becoming obvious. President Recep Tayyip Erdoğan has decided to repair relations with Russia and is using the attempted coup to demonstrate to the Russians that he was not involved in ordering the downing of the aircraft, but that his political enemies were responsible.

There are some problems with this version of events. The intercept of the Russian fighter jet took place after a number of incursions into Turkish airspace. According to multiple sources, including Turkish ones, the Russian plane that was shot down was over Turkish territory for a very short time. The tactical air defense controllers did not have time to query the national command authority (their bosses) for permission to shoot. The decision to shoot down a Russian plane entering Turkish airspace had to have been made before the incident. The alternative is that the tactical controllers on the ground, not the pilots, acted without authority. That would mean that the command to shoot came from at most a colonel in tactical ground control. 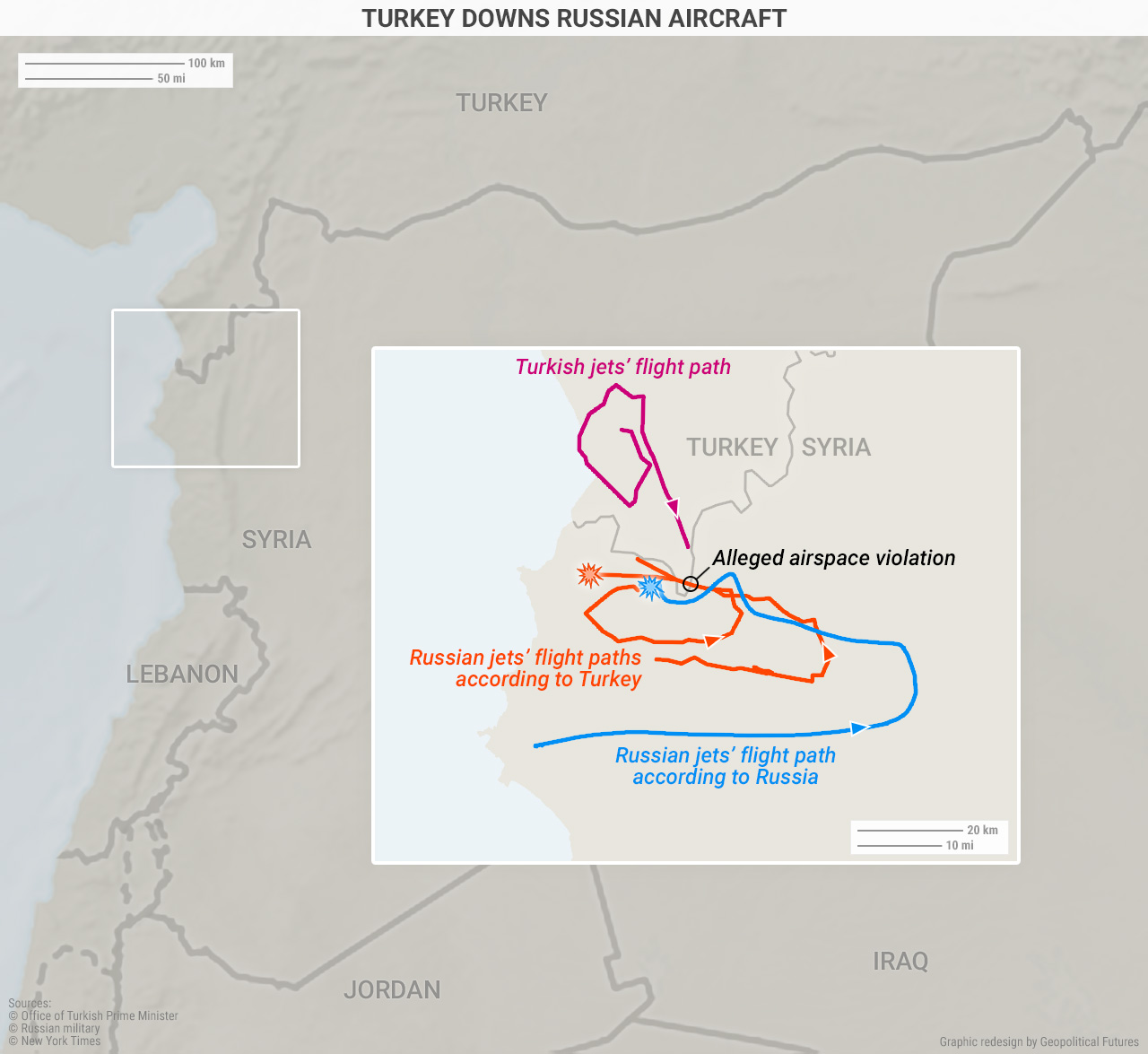 The Turkish government, including Erdoğan, reacted immediately and without hesitation charging that the incursion was not the first and that the Russians had been constantly violating Turkish airspace. They vigorously condemned the Russians. There was never any official or unofficial leak indicating that there was anything amiss with the shoot down, no one in the air or on the ground was relieved of their duties and there was no indication of an investigation.

Given that Turkey is a NATO country and its personnel cooperate constantly with the personnel of other countries, any discipline taken against those responsible for the shoot down would have become known. Stories of investigations and heads rolling spread like wildfire through a military organization and the likelihood of it not being picked up by NATO personnel and Russian personnel is low. Relieving a tactical sector commander and some pilots over the biggest military event for the Turkish Air Force in years would have filled the cafeteria of every Turkish Air Force base with gossip for months. It didn’t happen. What did happen was Turkey’s vigorous condemnation of the Russians.

The politics also don’t make sense. The Russian intervention in Syria was designed to bolster the Bashar al-Assad regime. The Erdoğan government opposed the Assads for the killing of Turkmens in Syria. This had been a blood feud for years. The Turks were furious at the Russian intervention, which made Turkey look weak at the same time questions were being raised about possible Turkish support for the Islamic State. The Russian intervention put Erdoğan in a difficult political situation and its penetration of Turkish airspace without response would have made him look even weaker. He was under pressure to respond somehow. Erdoğan could not appear afraid to act in the face of Russian provocation.

Shooting down the Russian plane made political sense and it is extremely unlikely that a general order had not been issued authorizing rapid interdiction of any intruding aircraft. Anyone issuing that order without clearance from the highest echelons — this would go to Erdoğan himself — would have been court-martialed in any air force. Hostility to the Russian presence in Syria was deep seated, political and not a passing whim. Nothing Erdoğan did after the incident indicated that he did not authorize the attack and did not approve of it. He held the Russians responsible. The idea, months after the incident, that it had been part of a coup is hard to fathom.

It, however, makes sense to make this claim in the context of current Turkish strategy. The Turks are claiming that Fethullah Gülen was behind the attempted coup. He lives in the United States and Erdoğan demanded that the U.S. hand him over if the U.S. was really Turkey’s “strategic partner.” The U.S. can’t simply hand him over, given extradition treaties with Turkey and U.S. law. But embedded in the demand is the hint that the U.S. helped engineer the attempted coup. Middle Eastern newspapers have been filled with the charge. While many are questioning whether it was actually a coup attempt, another claim is emerging that the U.S. was behind it.

When the plane was shot down and Turkish-Russian relations collapsed, it forced Turkey into a closer relationship with the United States. Turkey was not strong enough to be hostile to both Russia and the U.S. But Turkey was not altogether comfortable with having closer ties with the United States. First, it did not want to take a major military role in Syria, particularly in engaging in extensive combat with the Islamic State. The Americans wanted the Turks to play a stronger role but the Turks believed it would become an endless occupation that they were not ready to undertake.

Erdoğan did not want to become the junior partner of the United States and the downing of the jet led Turkey in that direction. He made a sudden move to normalize relations with Israel and almost simultaneously issued an apology to Russia over the shoot down. The move toward Israel was intended to placate the U.S. Erdoğan didn’t want to go too far in defying the U.S. The second move indicated that he wanted to end the confrontation with Russia and, therefore, wouldn’t be drawn into any American defensive plan against the Russians.

Erdoğan was never satisfied with having to make an apology. The coup attempt gave him an opportunity to redefine the apology. The attack on the Russian aircraft was not authorized by him but instead was authorized by the people carrying out the attempted coup. Erdoğan was as much a victim of the shoot down as Russia. By punishing the coup plotters, he is repairing any harm done to the Russians. And by withdrawing from the confrontation with Russia, he recovers his room to maneuver and frees Turkey from American pressure.

The attempted coup, or whatever it was, had to do with a great deal more than this of course. But its aftermath is in part about regaining Turkey’s space, lost as Turkey became dependent on the United States following the shoot down. The discovery that the people who planned the coup also planned the shoot down neatly creates the opening and makes it appear that Erdoğan was not at fault. Some people will buy this, particularly in Turkey, which is the intended audience. In the meantime, Erdoğan is pushing hard on the United States and shifting his weight toward Russia, a classic balance of power move.

The Maghreb and Its Challenges for Europe

Uruguay in the Spotlight

What We’re Reading: Swordplay and Cake

The Posh Versus the Blokes in the UK