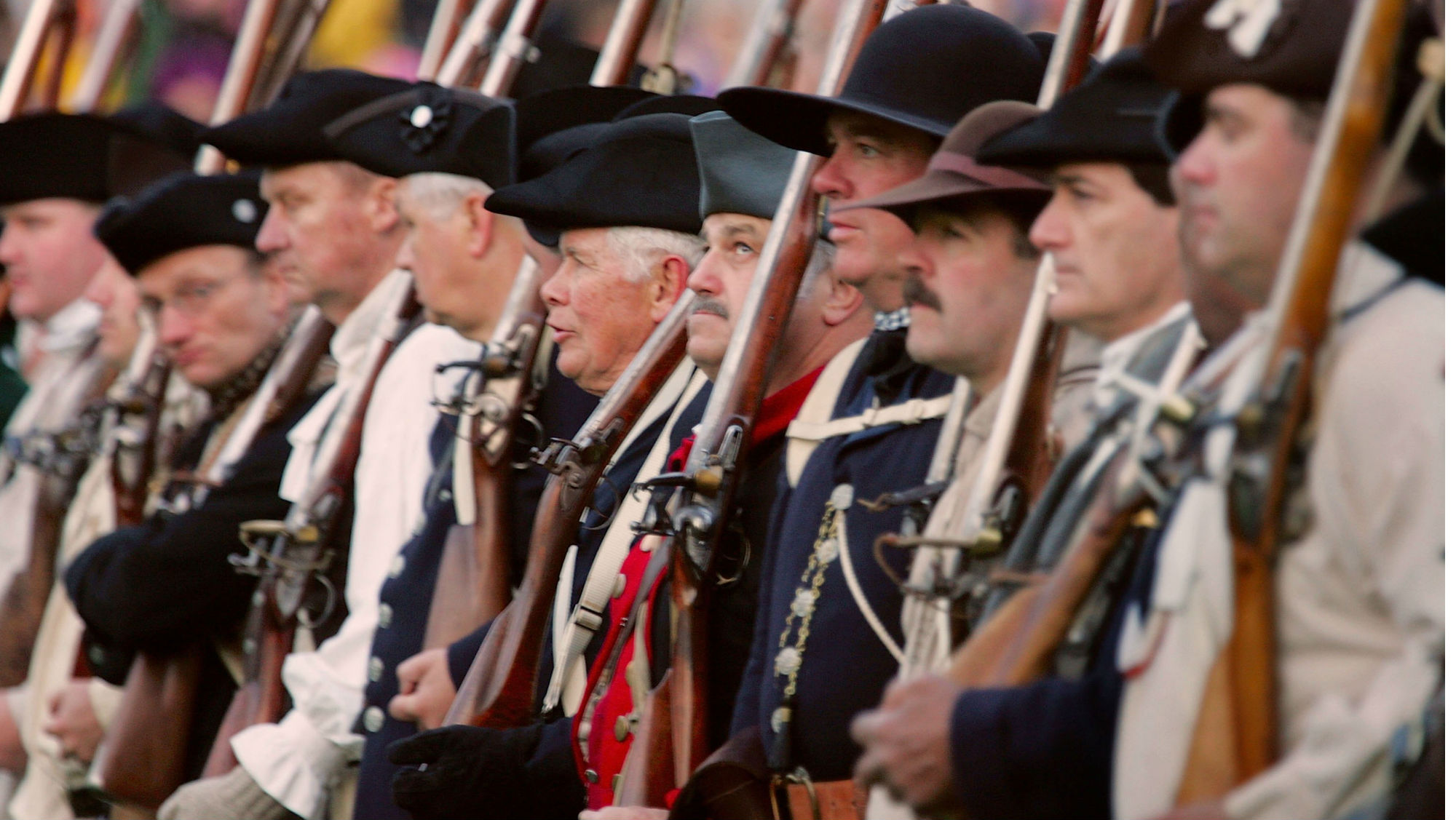 This past weekend, I attended a re-enactment of the Battle of Lexington, the battle that started the American Revolutionary War, in Massachusetts. The pleasure of being with children and grandchildren was my primary motive. But as I watched the superb re-enactment, an obvious question came to mind: Why did the Americans defeat the British, not just at Lexington but in the war itself? The British forces were better armed and better trained, and there were potentially far more of them. On a purely military basis, the British should have won, yet they didn’t.

A phrase came to mind: asymmetry of interests. The concept of asymmetrical warfare has become commonplace in recent years. It refers to warfare in which different types of technology and tactics confront each other, like improvised explosive devices against armored brigades. Sometimes, the force with what appears to be inferior technology can compel the force with superior technology to withdraw. This is what we see in the American Revolution. We need to consider why.

About 56,000 British troops were deployed at the height of the Revolutionary War, supplemented by 30,000 Hessian mercenaries in a kind of coalition. The Americans deployed about 80,000 regular and militia forces. The British forces were far better trained and, most important, had more and better artillery. The Hessians were professional soldiers. The Americans had a core of trained soldiers, but the militia troops were a mixed bag. During the war, 25,000 American troops died in battle or from disease compared to 24,000 British. The British losses were a fraction of the global British force, but for the Americans, this was 5 percent of the free white male population, according to the website Foxtrot Alpha‏.

The British forces were united. The American population was divided. A little less than half of all Americans were committed to the revolution. A fifth were loyal to the British. Thus, both sides were fighting on a terrain in which substantial parts of the population opposed them. The British drew their supplies from Britain, while the Americans had to draw their logistics from the population – with some help from the French.

When you look at the disparities, the losses and the disunity, the Americans should have lost. It is true that the final battle involved the French fleet, but the Americans stayed intact as a fighting force for eight years to reach that point. So even leaving the French out, the Americans were not defeated. And to keep fighting, the Americans had to absorb tremendous casualties without a decisive break in cohesion and morale.

They were able to do it because of the asymmetry of interests. The Americans were fighting for their homeland. Defeat would subordinate the United States to British power for a long time. They had no interests that could compete with the interest to defeat the British. The British, on the other hand, were simultaneously engaged in a struggle with France for domination of Europe and control of the oceans, a contest that would lead to global empire. For the British, the American Revolution was not a matter of indifference, but neither was its outcome decisive in determining Britain’s place in the world.

The British were prepared to deploy a substantial force in North America, but having done that, they went on with their nascent industrial revolution and their global concerns. The amount of time and casualties they could rationally devote to North America had to be seen in the context of broader interests. They could absorb casualties, but the war could not be an absolute imperative.

World War II is on the other end of the spectrum, a rare war in which all major powers had absolutes at stake. Britain, Germany, Japan, the Soviet Union and the United States all faced, or could face, existential consequences from the war. Their interests were symmetrical. It was therefore a war in which no effort was spared by anyone to avoid defeat and attain victory. In a sense, the war, once commenced, ceased to be political. It became a purely military conflict in which anything less than total military and industrial commitment would be irrational. There was precious little political maneuvering once the war got fully underway in 1941.

For many Americans, the WWII model, which I will call “absolute war,” ought to be the model for fighting all wars. Instead, none of the U.S. wars since WWII have been absolute. As a result, since that time the U.S. has been unable to decisively defeat enemies that are militarily inferior. Korea resulted in stalemate. Vietnam resulted in stalemate, withdrawal and the defeat of America’s Vietnamese allies. The wars against jihadists have not resulted in a decisive, positive outcome for the United States. The only conflict since WWII in which the U.S. achieved its strategic goal was Desert Storm, where the Iraqi army was defeated in Kuwait. Many blame strategy or insufficient public support or a host of other reasons for this.

There might be truth to all these reasons, but I think the fundamental reason was an asymmetry of interest between opposing forces. Consider Vietnam. Vietnam was on the periphery of American strategic interest. The U.S. was less concerned with Vietnam than with the consequences in the region and elsewhere if North Vietnam were to unite the country under communism. Those consequences were hypothetical – even if they occurred, they might not undermine U.S. interests substantially. On the other side, the North Vietnamese were fighting for fundamental national imperatives, chief among them the unification of Vietnam under the ideological and political control of Hanoi. From this, they might control all of Indochina and emerge as a major regional power able to counterbalance China.

In other words, the outcome of the wars in Vietnam – French and American – went to the heart of the North Vietnamese national interest. The wars from the French and American points of view were not insignificant but were still on the margins of national imperatives. The unification of Vietnam under a communist regime was essential to North Vietnam. Blocking North Vietnam’s ambitions was of interest to the United States, but not an absolute imperative. It was part of a mosaic of interests.

The British were not prepared to devote all the resources they had to fighting American rebels. Doing so would have been irrational. Even defeat at the hands of the heavily committed Americans was more palatable than throwing their fleet into battle with the French at that time and place. For the British, there was nothing absolute in North America. It was a political war, not an absolute one. The same has been true of the United States in Korea, Vietnam, Kuwait, Afghanistan and Iraq. Thus, only one of these wars was won, while over time, the imperative that led to war dissipated.

In a democratic society, sacrificing lives without an absolute commitment to victory is unsavory. All of the wars since World War II have left a bad taste in the mouths of Americans. Sacrificing lives for tactical advantage, rather than for the direct defense of the homeland, is unpalatable. Sacrificing them for tactical advantage that is abandoned over time is worse. Absolute war is moral; political war designed to bring temporary advantage has the air of immorality.

In watching the re-enactment of Lexington, I could imagine British planners thinking, “We can’t abandon North America, but we can’t ignore the French, and the French are more important.” They must have spent many hours being briefed on the French and far less on the Americans. In due course, since the Americans were prepared to die far out of proportion to the interests of the British, their notional helicopters lifted off their notional embassies and left with their global power surging in spite of defeat.

Great powers have multiple interests, and not all interests are the same. That means a global power is prepared to initiate and withdraw from wars without victory, for tactical and political advantage. Over time, paying the cost of the war becomes irrational. Great powers can “lose” wars in this sense and still see their power surge. Fighting in a war in which your country’s interest is not absolute, and therefore the lives of soldiers are not absolute, is difficult for a democracy to do. In most of the world, the great power will encounter an asymmetry of interest. Those who live there care far more about the outcome of the war than the great power does. And so, the great power withdraws from Syria when the price becomes higher than the prize. Given the string of defeats, it is expected that the great power is in decline. Like Britain after its defeat in North America, it is not in decline. It has simply moved on to more pressing interests.

A Major Contraction in Jobs