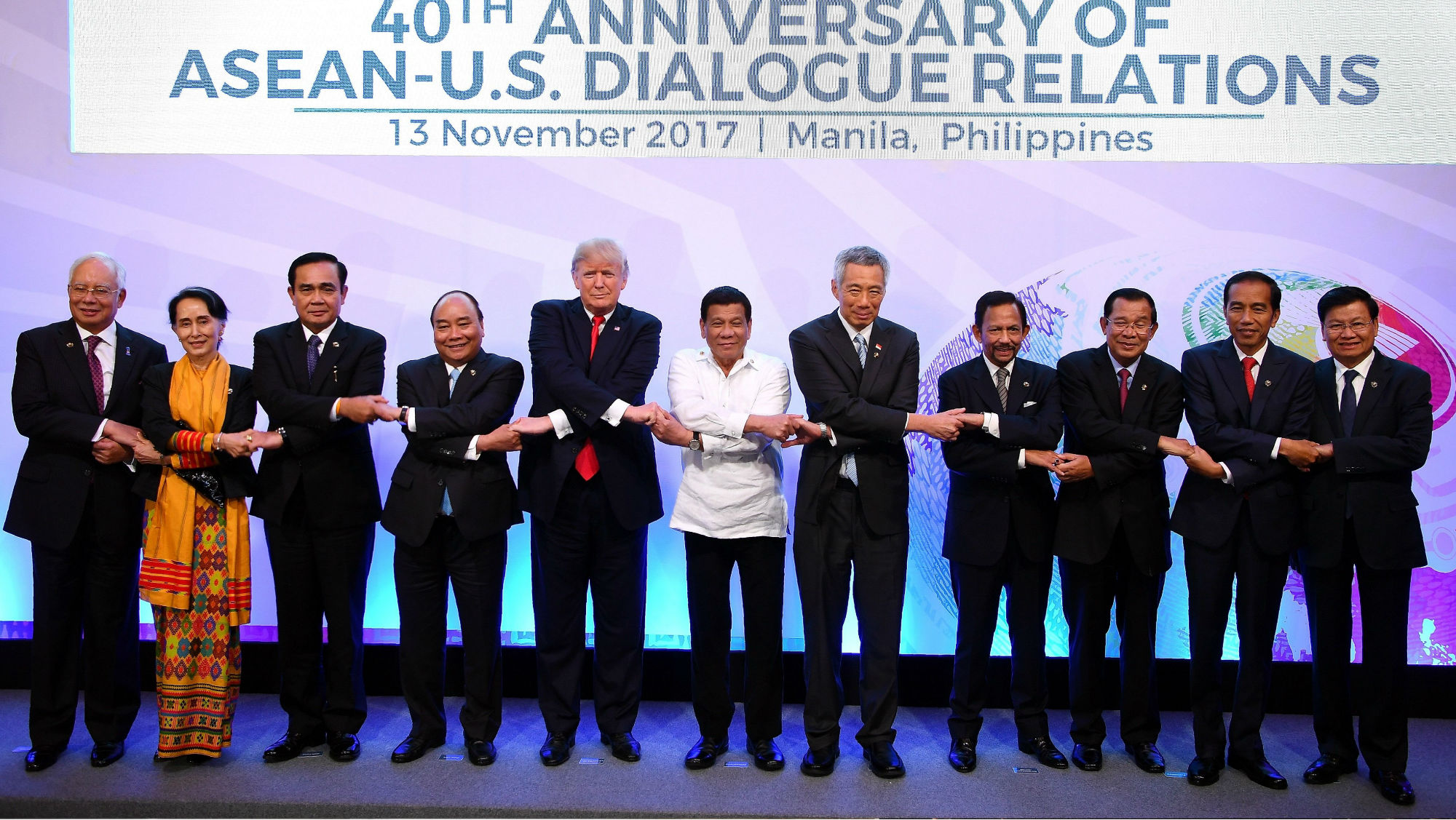 During his five-nation tour of Asia, U.S. President Donald Trump has repeatedly employed a phrase that some observers have taken as a glimpse into his administration’s approach to the region. Whereas his predecessor labeled the region the “Asia-Pacific,” Trump has made the subtle but noticeable shift to calling it the “Indo-Pacific.”

In many ways, however, U.S. strategy in the region hasn’t changed. Consistent with Barack Obama’s “pivot to Asia,” it still focuses heavily on freedom of navigation and overflight, cementing a rules-based economic order, and the need to help regional states deter coercion from expansionist powers (read: China). Some aspects of the U.S. approach certainly have shifted. As could have been expected, Trump explicitly denounced multilateral trade pacts – a major component of past U.S. strategy – and hinted at a somewhat more hands-off approach to managing flashpoints like the South China Sea. But the underlying message in Trump’s broad strategy for the region was that the U.S. is not withdrawing from Southeast Asia, despite regionwide uncertainties about future U.S. engagement; it’s just not going to entangle itself in commitments that stray from core U.S. interests. 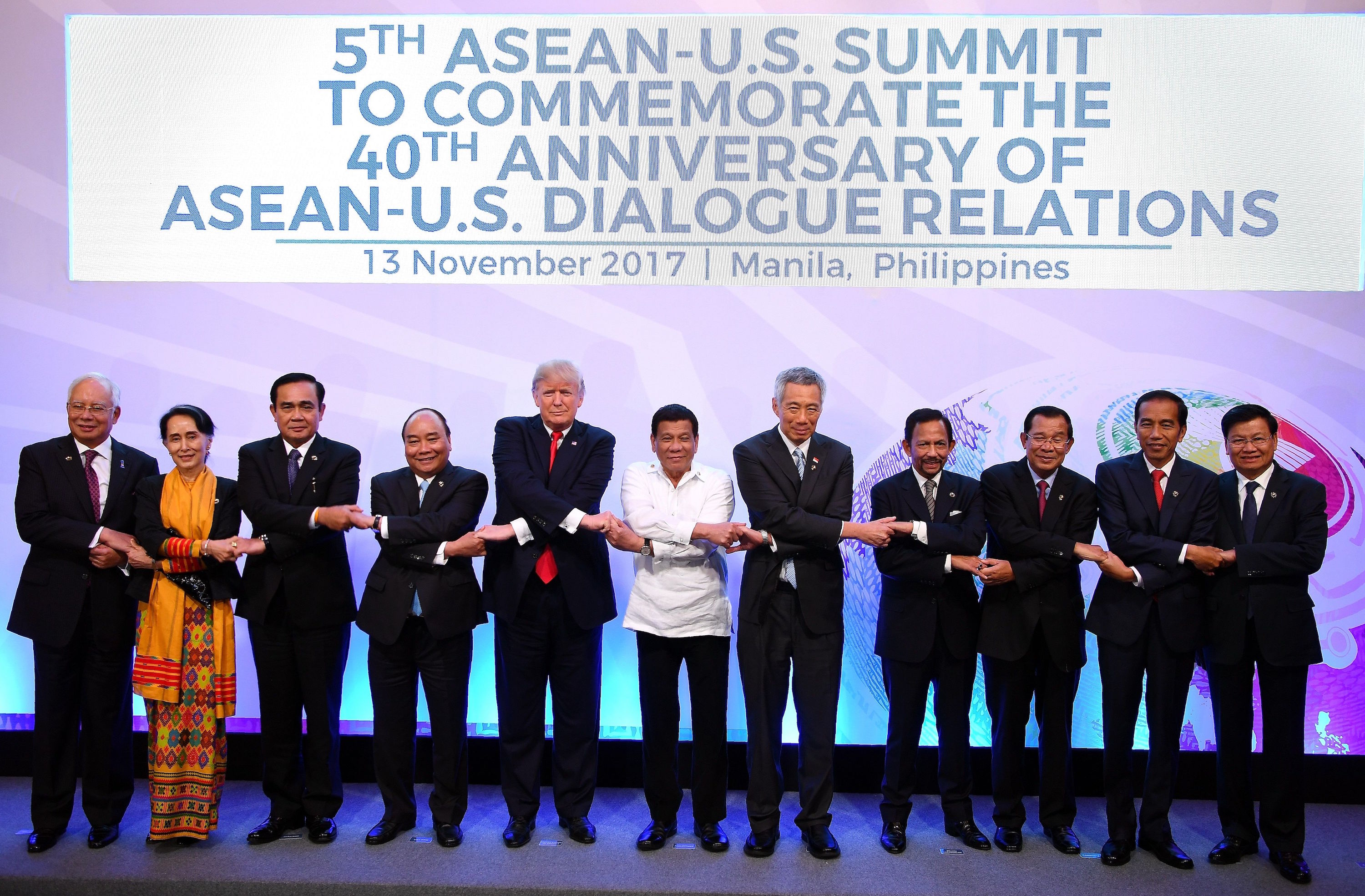 Leaders from Malaysia, Myanmar, Thailand, Vietnam, the United States, the Philippines, Singapore, Brunei, Laos, Indonesia and Cambodia pose for a photo during the ASEAN-U.S. 40th anniversary commemorative summit on the sideline of the 31st Association of Southeast Asian Nations Summit in Manila on Nov. 13, 2017. MANAN VATSYAYANA/AFP/Getty Images

The U.S. as a Mediator

The underlying drivers of the U.S. strategy were reflected in an offer Trump reportedly made to mediate disputes between China and Southeast Asian states over the South China Sea. The U.S. cannot be the peacemaker in the South China Sea dispute, primarily because China’s moves in the waters are largely motivated by the U.S. position in the Western Pacific. So long as the U.S. maintains a significant military presence along what’s known as the First Island Chain – Japan, Taiwan, the Philippines and Indonesia – it is a threat to block sea lanes that are critical to China’s export-dependent economy. China’s only viable strategy to ensure its access to the Pacific is to reach a political accommodation with a country in this chain that China can be certain wouldn’t side with an outside naval power during a major conflict.

Its assertiveness in the South China Sea is thus a means toward that end, but also a contingency, in case that strategy fails. In other words, Beijing is betting that its overwhelming superiority compared to weaker Southeast Asian states will diminish the appetite for confrontation among its southern neighbors and turn their attention toward the tangible benefits of cooperation, particularly on the economic front. But even if such an arrangement proves elusive, this strategy still enables China to build up its maritime defenses in an effort to raise the costs of an attack on the Chinese mainland. Although this strategy risks driving these states toward the U.S. and its allies, China has little choice but to pursue it.

Trump’s offer to mediate should not be taken at face value and should instead be seen as an expression of two things. The first is that the U.S. capability and willingness to secure core strategic interests in the Western Pacific is permanent – and China can’t challenge that – effectively making it the arbiter of maritime issues that it decides merit its involvement. The second is that China’s goals in the South China Sea shouldn’t be automatically at odds with those of the United States, meaning China should fear containment only if it gives the U.S. and its allies little choice but to contain it.

The main U.S. interest in the South China Sea dispute is preventing a conflict or an erosion of maritime law that threatens to disrupt seaborne trade. Some 30 percent of global maritime trade and about half of global oil tanker shipments pass through the waters each year. The U.S. is signaling to Beijing that it’s willing to help shape a settlement between China and other claimants in the region that both eases Chinese anxieties and complies with international law and maritime norms. But for China, this would amount to ceding its claims in the disputed waters, undermining its overriding strategy. The U.S., therefore, is also indicating that continued Chinese expansion will come at a cost. For example, this weekend saw the first meeting in 10 years of the so-called Quadrilateral Security Dialogue – a loose coalition involving Japan, India, Australia and the U.S. intended to prepare for the possibility of future Chinese aggression. The U.S. is also leaning on its allies – Japan, in particular – to offer security assistance to Southeast Asian states.

The drawback for the U.S. is that if it appears to be washing its hands of the territorial disputes in the South China Sea altogether, it will heighten the sense among claimant states like the Philippines and Vietnam that the U.S. is unreliable. This plays into the Chinese narrative that Southeast Asian states would be wise to accept as a fait accompli its ascension as regional hegemon. Notably, the leaders of both Vietnam and the Philippines appeared to dismiss Trump’s offer out of hand. Philippine President Rodrigo Duterte rejected potential U.S. military involvement on the issue, while Vietnam moved forward with bilateral negotiations with Beijing. Both countries will cautiously boost military cooperation with the U.S. and rest on assurances that a major crisis would threaten the U.S. interests and thus compel an intervention. But the fact that they don’t want to antagonize Beijing by involving the Americans in negotiations with China underscores the limits of U.S. influence and leverage over how the disputes play out.

The current U.S. position on trade is also difficult to square with broader U.S. goals in the region. The strategic impetus for the original Trans-Pacific Partnership, which fell victim to domestic politics in the U.S., was to deter Chinese economic coercion in Asia, solidify U.S. partnerships in a trade-focused region, and cement an open, rules-based and U.S.-centric economic system. Trump wants to replace it with a series of bilateral trade deals. In addition to security cooperation, the Quad is expected to focus heavily on coordinating infrastructure investments to balance China’s One Belt, One Road investments. To an extent, Japan is filling the void on the economic front as well by balancing the surge in Chinese investment in Asia and spearheading efforts among the 11 remaining TPP members to revive the trade pact. Indeed, TPP-11 countries struck a broad agreement in principle on reviving the deal this weekend, leaving the door open for Washington to return if the political environment in the U.S. reverts to the broadly pro-trade orientation it has maintained since World War II.

But all these alternatives are works in progress, at best. Trump spent much of the past week pressuring regional states, including close allies, to narrow their trade imbalances with the United States. At this point, there’s not much political or economic logic driving a multipronged trade push.

Overall, however, Trump’s trip to Southeast Asia has underscored the reality that the new “Indo-Pacific” strategy isn’t really that much of a departure from what the U.S. was already doing in the region. The U.S. has always been loath to risk getting dragged into a war not of its choosing by entangling itself in the South China Sea dispute. As a result, it has limited itself largely to symbolic moves like so-called freedom of navigation operations (where a U.S. warship discredits Beijing’s territorial claims by sailing near Chinese-occupied islands), while quietly bolstering its military footholds along the First Island Chain and around the Malacca Strait. Shifting security burdens to allies has been the U.S. strategy for a decade now. What’s different is that the U.S. is more openly narrowing its focus to the core interests that were the main drivers of its regional strategy in the first place.

In Europe and China, a New Status Quo