Something is quietly stirring in the Horn of Africa. Over the past month, the United States seems to have shown a renewed interest in Somalia and the security threats that emanate from it. On April 15, U.S. Africa Command confirmed that several dozen troops from the 101st Airborne Division would train and equip Somali forces to more effectively combat militant Islamist group al-Shabab. Shortly thereafter, U.S. President Donald Trump signed an executive order giving AFRICOM more autonomy in its missions against the group. Then, on May 5, Washington announced the death of a U.S. Navy SEAL outside the capital of Mogadishu – and, in doing so, acknowledged that the United States was participating in local military operations there. U.S. Secretary of Defense James Mattis is even slated to attend a conference in the United Kingdom on May 11 over the future of Somalia.

These events raise an obvious and important question: Why does Somalia warrant such a military commitment from the world’s only superpower?

The answer to that question, as is so often the case, starts with geography. Somalia’s northern coast borders the Gulf of Aden, which leads to Bab el-Mandeb, a narrow chokepoint through which all maritime traffic from the Mediterranean Sea to the Indian Ocean must pass. Avoiding this strait would take all goods from the Persian Gulf – including oil – around the entire African continent to reach European and American markets. It is also a valuable staging ground for navies to project power on to the Arabian Peninsula. 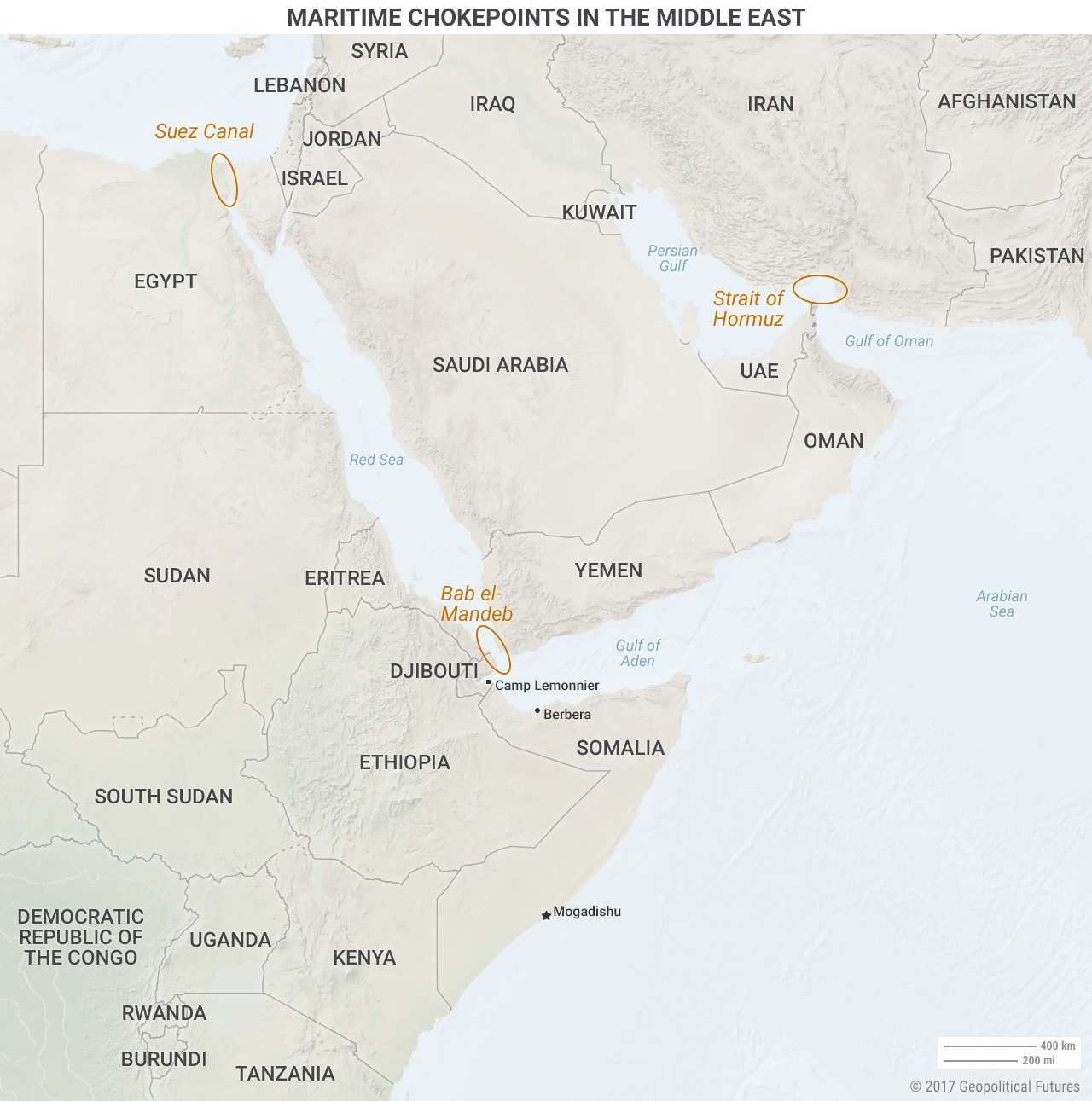 For this reason, Washington’s interest in Somalia remained steadfast even after the Cold War ended. After civil war erupted in 1991, the United States, in a testament to Somalia’s geostrategic importance, participated heavily in the U.N. peacekeeping mission there. (Washington would later reduce its involvement after sustaining casualties in 1993.) Among the groups fighting for power were Islamist groups, one of which, the Islamic Courts Union, actually controlled southern Somalia in the 2000s. An extremist wing of the Islamic Courts Union split from its parent group, donned the name al-Shabab, and continues to conduct terrorist attacks in the country. Al-Shabab also boasts ties with both al-Qaida and the Islamic State group. Formally, Somalia now has a central government, but it cannot control formally or informally such an untamed and fractured country, to which al-Shabab is a big contributor. 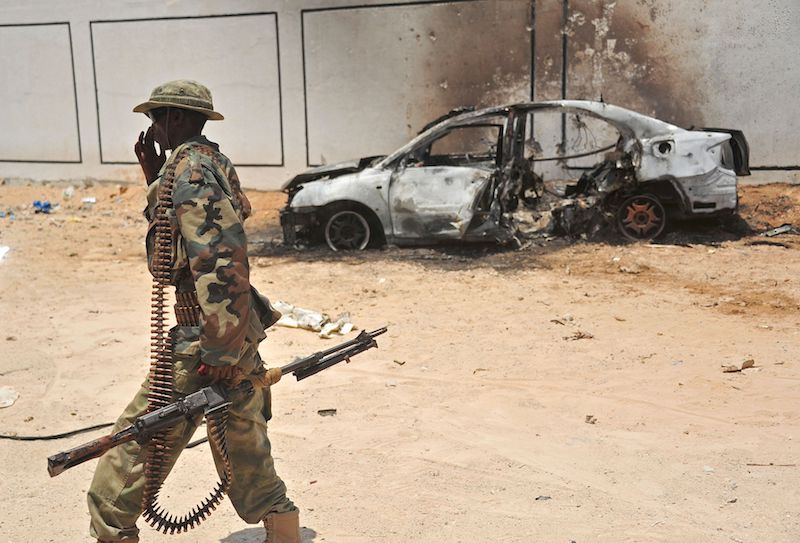 A Somali soldier patrols next to the burnt-out wreckage of a car that was used in an attack by suspected al-Shabab fighters on April 16, 2017. MOHAMED ABDIWAHAB/AFP/Getty Images

The United States, meanwhile, has been coming to terms with the costs of global hegemony. It has been trying to extricate itself from faraway military operations such as those in Iraq and Afghanistan. The Horn of Africa is no different. Washington understands that it does not have the resources or political capital to fight every war in the world. But it still needs to be active in places like Somalia to protect its global interests. It has therefore pursued a strategy that involves a limited use of resources necessary to achieve an acceptable result as opposed to decisive, clear-cut victory.

Such is the case in Somalia. Over the past few years, Washington has selectively developed a military presence throughout the Horn of Africa that features drone technology, special operations forces and cooperation with other regional actors. The East Africa Response Force, an outfit comprising members of the U.S. Air Force, Marines and Navy tasked with crisis response and personnel recovery, returned to Camp Lemonnier in Djibouti (the largest U.S. base in Africa) in April 2014. Plans are also underway to add new facilities to the U.S. special operations compound at Lemonnier. In addition, U.S. 3rd Special Forces Group were sent back to Africa in late 2015 after serving in Afghanistan. The U.S. government was also privy to the negotiations for DP World’s plans to develop Berbera port in Somaliland along the Gulf of Aden, as well as plans by the United Arab Emirates (a strong U.S. ally) to establish a military base near there.

Central to this strategy, however, is the inclusion of local forces to share security responsibilities. To that end, the United States has been delegating to regional leaders who have a more vested interest in stabilizing the internal conflicts and terrorist threats coming out of other countries. Given their shared border with Somalia, not to mention their comparatively mature militaries, Ethiopia and Kenya appear as the two most natural candidates. 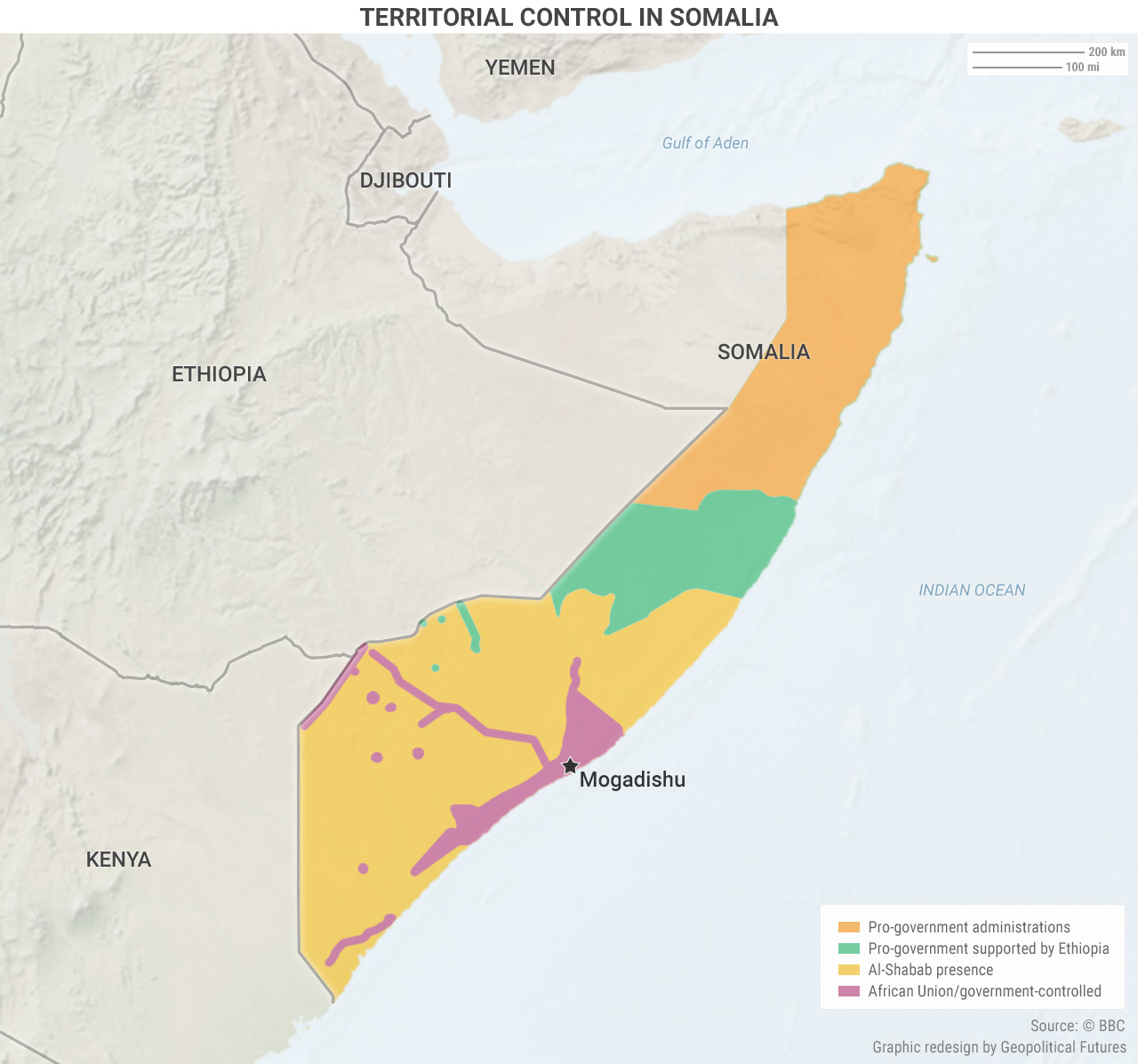 Ethiopia, however, is undergoing a period of nationwide unrest and is not in a position to be a viable partner. The country recalled some of its troops from Somalia citing financial restrictions, but the more likely explanation is that more security forces were needed to help quell domestic political unrest.

Kenya appears to be more reliable. The country has a direct incentive to help, considering al-Shabab has conducted attacks on Kenyan soil. Recent U.S. gestures to help Kenya play its regional role include increased military training programs, inclusion in regional military drills, and the sale of 12 new U.S.-made light attack helicopters, 24 heavy machine gun pods and accompanying systems, 24 rocket pods and some 4,000 M151 high-explosive rockets. With so much time spent fighting insurgencies, moreover, the United States has a lot of experience it can impart to Kenya that it cannot get from other countries.

There may also be economic motivation to helping the United States. Kenya is an emerging East African economy, and its main strategy for increasing basic manufactured exports is to take advantage of the United States’ African Growth and Opportunity Act, which gives Kenya preferential trade status with the United States. For this reason, in late April, the Kenyan government sent Foreign Affairs Cabinet Secretary Amina Mohamed to Washington to discuss security cooperation, economic agreements and investment opportunities with U.S. officials.

Ideally, the United States would like to see al-Shabab, and indeed all radical Islam, destroyed. But to achieve this requires the United States to use vast resources for results that are far from guaranteed. Instead, the United States will settle for keeping the world’s sea lanes off the Horn of Africa open and safe for passage. This is the U.S. imperative in the region, and a containment approach to al-Shabab in Somalia achieves that goal, particularly since the group is relegated largely to the south, separated from the strategic north by vast deserts and poor transportation infrastructure. The United States will try to use its allies to help it keep al-Shabab there, a sufficient outcome for a country trying to strike a balance of power in virtually every corner of the world.