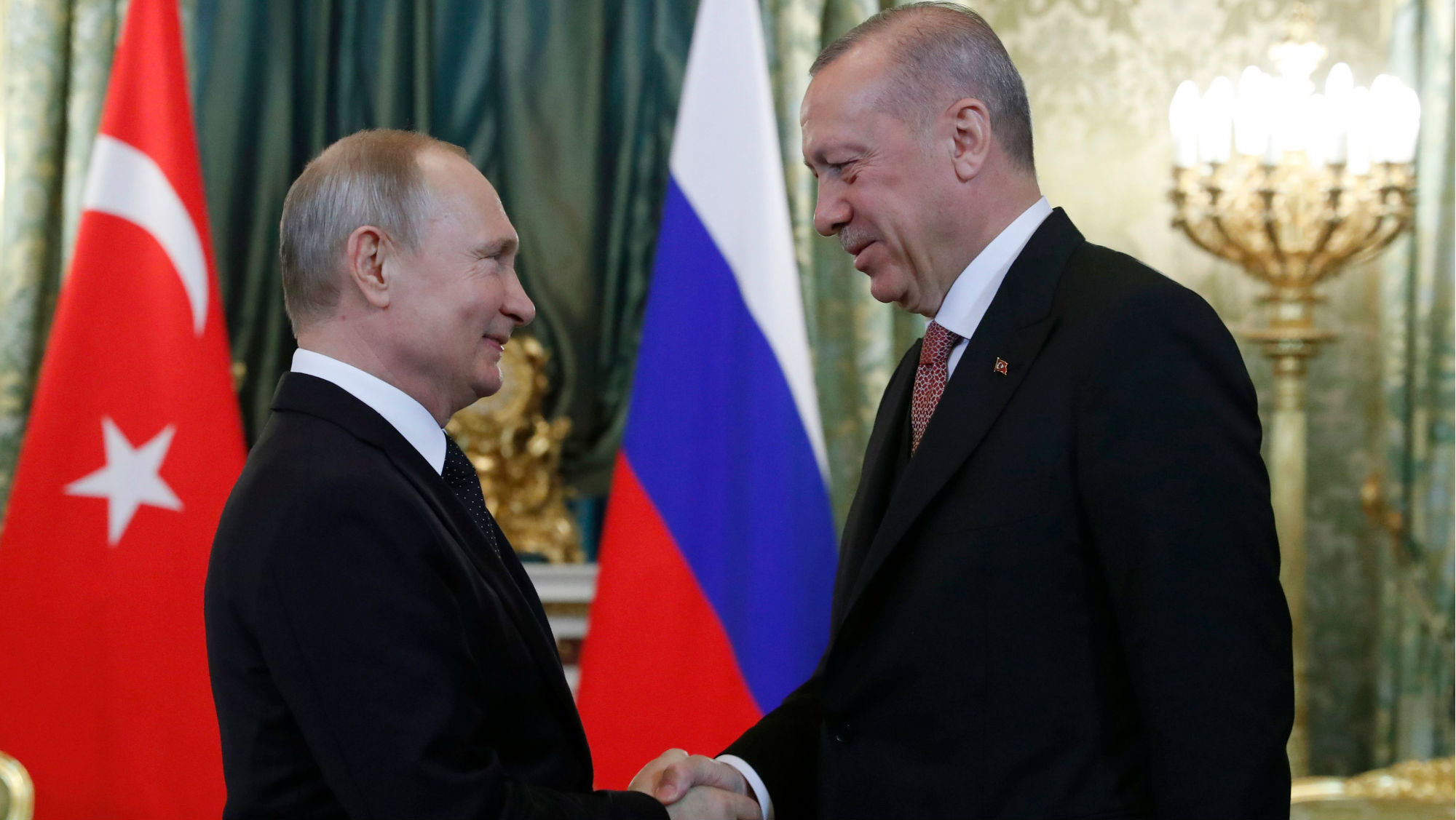 Over the past year, many observers have suggested that Russia and Turkey appear to be setting their historical differences aside and building an unlikely but mutually beneficial alliance. As evidence, they would point to Russia’s tacit approval of Turkish operations against Kurdish militias in northern Syria, their cooperation in creating a demilitarized zone in Idlib, and Turkey’s continued defiance of the U.S. and NATO in pursuing its purchase of Russian-made S-400 missile defense systems.

But appearances can be deceptive. There are still myriad issues standing between the two countries, most recently their support of opposing sides in the Syrian war. Alliances require shared interests – not just opportunities for temporary cooperation but a long-term convergence on issues of vital importance. Forming new alliances, therefore, requires countries to adopt new interests or, at least, new strategies for pursuing their interests. In the case of Russia and Turkey, there’s little evidence this has happened.

A History of Conflict 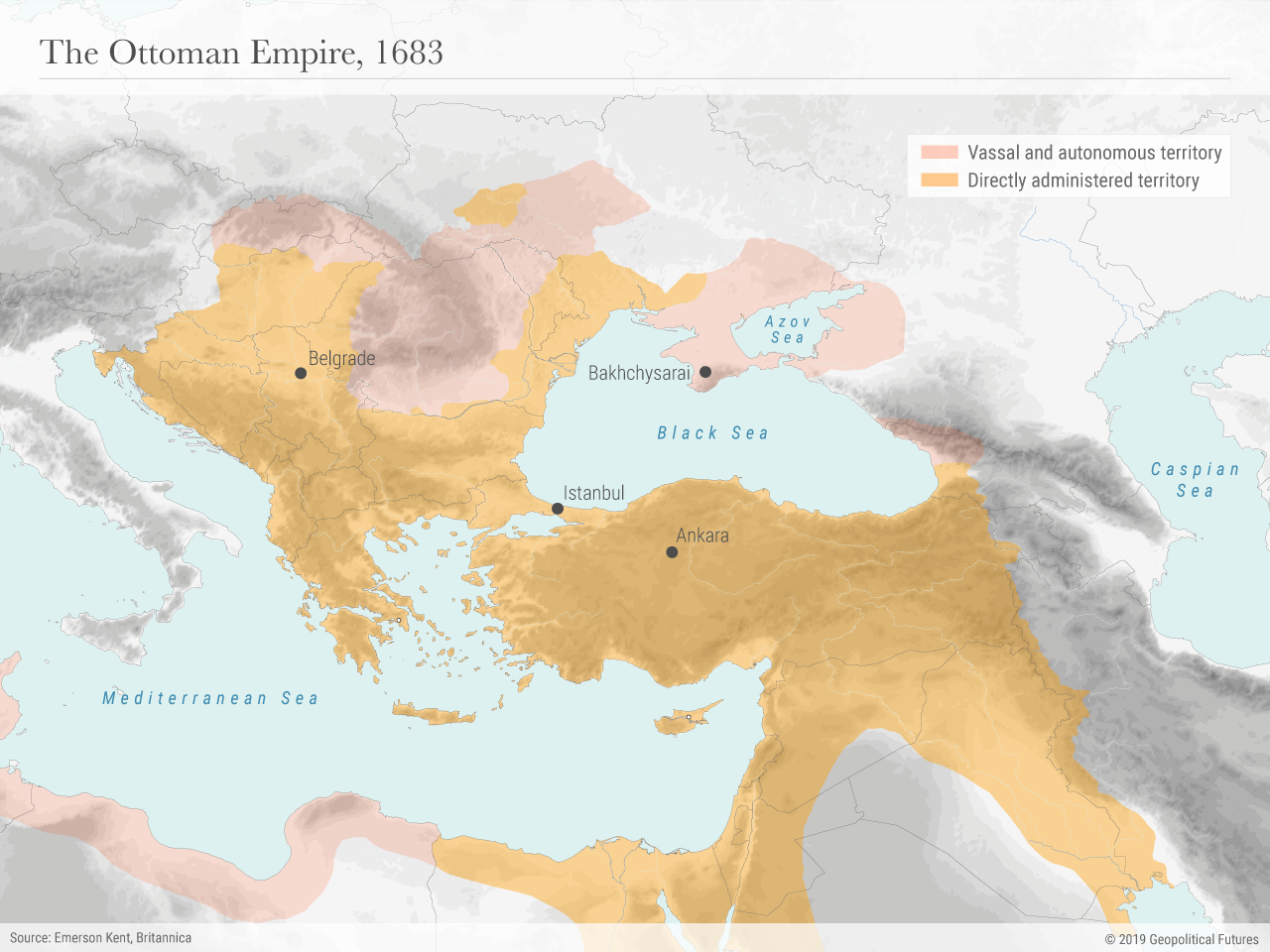 Today, their relationship is as complicated as ever. Ankara and Moscow have cooperated on some fronts, including the Astana peace talks and establishing de-escalation zones in Syria. Turkey is also heavily dependent on Russia for its natural gas supply (over 50 percent of which comes from Russia) and the two countries have a growing trade relationship and tourism links. But this isn’t new; throughout history, Russia and Turkey have found ways to develop economic ties despite their repeated conflicts. For example, in the Treaty of Kucuk Kaynarka, which ended the 1768-74 Russo-Turkish War, Russia gained merchant shipping rights throughout the Black Sea as well as easier access to trade in the Ottoman Empire.

But despite the fact that the two have reached accommodation on certain issues, their interests still diverge on two key geopolitical flashpoints. The first is the Black Sea. Here, Russia and Turkey have long competed over the Bosporus and Dardanelles; the narrow waterways are the only routes from the Black Sea to the Mediterranean. The Bosporus in particular has been a point of contention; Turkey controls the waterway, and Russia has long feared its access could be cut off. In addition, since Russia seized Crimea in 2014, Turkey has refused to recognize the peninsula as part of Russia, believing Moscow’s expanded presence in the Black Sea could pose a security threat. 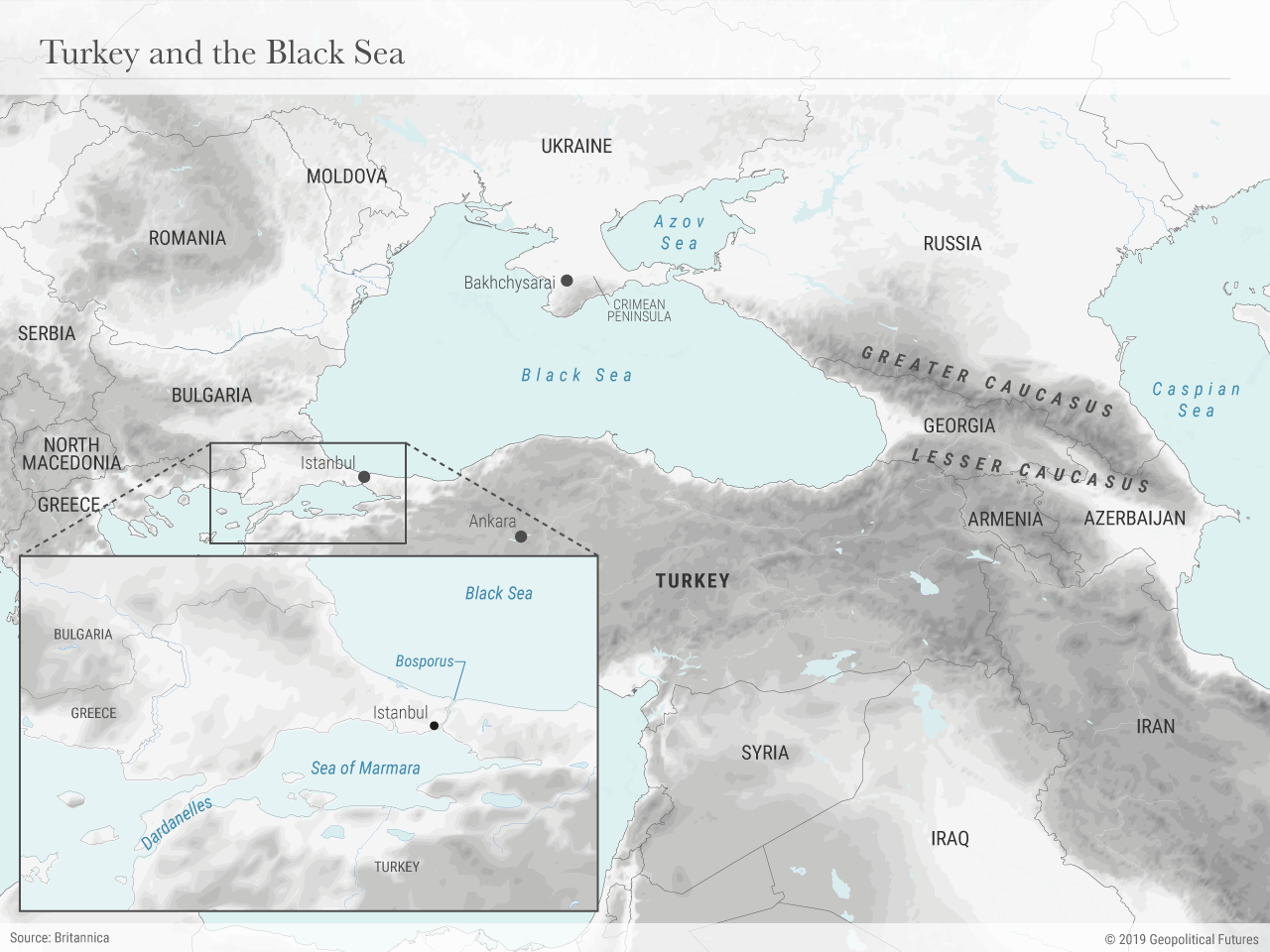 The second flashpoint is the Caucasus. If the narrow mountain passes in the South Caucasus were to fall into the hands of Russia’s adversaries, it could threaten the North Caucasus and, therefore, the Russian heartland. Thus, Russia has tried to keep other foreign powers out of the region. It maintains a military base in Armenia, for example, in part to deter a Turkish invasion of the South Caucasus, which nearly occurred during the Nagorno-Karabakh conflict in the early 1990s. In response, Russia stationed its own forces along the Armenia-Turkey border, which threatened to ignite yet another Russo-Turkish conflict just a few years after the end of the Cold War. But Russia also has a broader objective in Armenia: to prevent a union of Turkic peoples in Turkey and Azerbaijan, which could disrupt the balance in the South Caucasus. 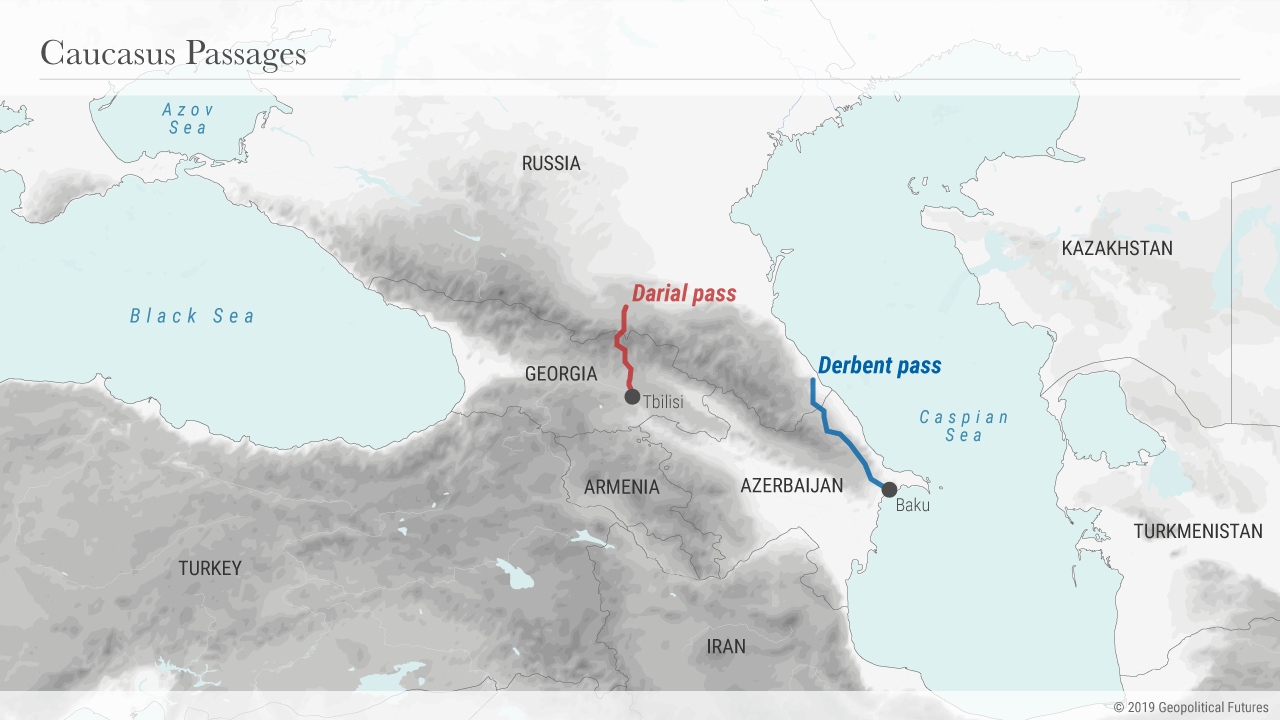 Then there’s the Middle East. In this region, Russian and Turkish interests have clashed most recently because of their backing of opposing sides in the Syrian war. Since the beginning of the conflict, Turkey has supported various rebel groups in their fight against Bashar Assad, who counts Moscow among his top supporters. While Turkey has won control over parts of northern Syria, its proxies have largely found themselves on the losing side of the war. With Russia’s help, Assad was able to take back much of the territory Turkish proxies had fought for – save for some small pockets in Idlib province that remain surrounded by pro-government and Kurdish forces. Turkey continues to support these groups in Idlib, but it has effectively lost the proxy war to Russia, making it clear the two countries are far from forming an alliance with one another.

Turkey also intervened in January 2018 in Afrin province, but that operation targeted the Syrian Kurds, not government forces. Here, Russia effectively greenlighted the Turkish air force’s operation, as did the U.S., which publicly stated that it did not support the Kurdish People’s Protection Units stationed in that province. But Turkey wants to bring more of northern Syria under its control, while Russia would prefer to see this territory returned to government control through a political settlement between the Syrian Democratic Forces and Damascus.

Considering their history of conflict and competition, why would Turkey want to purchase S-400 missile defense systems from Russia and risk endangering its relationships with key allies?

The answer lies in part in Turkey’s precarious past relationship with the United States. Turkey joined NATO in 1952, as a critical component in the Western containment line. Following Turkey’s 1974 invasion of Cyprus, which led to the establishment of the Turkish Republic of North Cyprus, the U.S. imposed an arms embargo against Turkey. Ankara responded by blocking U.S. access to military bases on Turkish territory. The key lesson for Turkey in all this was that it could not depend on foreign countries to supply the arms it needed to defend itself. Since the 1980s, therefore, Turkey has made a concerted effort to develop its domestic military industry.

But Turkey still needs to import certain technologies so that it can develop and produce its own arms and defense systems, and the U.S. has been resistant to sharing its technology with the Turks. In 2013 and 2017, Turkey passed on offers to purchase U.S. Patriot air defense systems because they included minimal or no technology transfer. Turkey then decided to purchase the China-made HQ-9, in part because of its lower price but also because of the technology transfer component of the deal, though the U.S. intervened and prevented Turkey from acquiring the Chinese systems.

Turkey signed the Russian S-400 agreement after turning down the second Patriot offer, even though, according to some reports, the S-400s were Turkey’s last choice when it initially took bids in 2008-10. Some outlets have reported that Ankara is getting access to Russian technology as part of the deal, though details of the agreement haven’t been made public. Moscow has denied that the deal includes any transfer of missile technology, but Russian state-run news site Sputnik reported in January that Moscow had indeed promised Ankara both joint production and access to certain technology.

But Turkey may also be using the Russian deal as leverage to try to secure better terms with Washington on a Patriot agreement. The U.S. has shown in the past that it’s willing to negotiate; in December 2018, it came back with a counteroffer, after Turkey had already decided to purchase the S-400s, although Ankara said it rejected the American proposal. And acting Defense Secretary Patrick Shanahan said earlier this month that he expects the impasse with Turkey over F-35s and Patriots to be resolved, an indication that negotiations are ongoing. In addition, Turkish Defense Minister Hulusi Aakar made an unannounced trip to Washington Wednesday to discuss the S-400 deal, a day after Finance Minister Berat Albayrak, who also happens to be President Recep Tayyip Erdogan’s son-in-law, met with U.S. President Donald Trump to discuss the same issue.

Still, the S-400s are expected to be delivered this July. The U.S. has threatened to block Turkey from purchasing F-35 fighter jets and participating in their production if it goes through with the S-400 deal. This may impede cooperation between the U.S. and Turkey on some levels, but it wouldn’t reflect a strategic shift toward Russia. It’s entirely possible that this is simply an example of a middle power trying to play bigger powers off each other to get the best possible deal. Even if Turkey doesn’t get everything it wants, at least it’ll get something.

And it’s not hard to see why Turkey may be prioritizing missile defense over fighter jets. It faces potential threats from Iran and Syria, both of which have fired or threaten to fire missiles into Turkey in the past. Air defense may also prove useful in the Eastern Mediterranean, where Turkey is competing with Greece, Israel and Cyprus for natural gas resources. Stronger area-denial capabilities could compel other countries to limit their exploration of the region and help Turkey secure natural gas reserves around Cyprus, and Turkey can’t depend on NATO for these capabilities because Greece is also a member.

There’s no doubt that the S-400 deal complicates Ankara’s relationship with Washington. But Turkey’s purchase of Russian systems, and even its cooperation with Moscow in Syria, is not indicative of a broader strategic realignment. It’s a convenient solution to an immediate problem and shouldn’t be interpreted as anything more.