The referendum in Turkey on Sunday was about increasing the powers of the president. But on a deeper level, it was about the relationship between secular and religious segments of society. When Mustafa Kemal Atatürk founded modern Turkey, his guide was European culture. That meant Turkey needed a secular political order. Creating one in a predominantly Muslim country was not an easy matter. He solved this by making the military the constitutional guardian of the secular state, protecting it against the power of the religious.

Almost a century after Turkey’s founding, the Kemalist formula has become untenable. The religious in the Muslim world have reasserted themselves in a number of divergent streams. This has inevitably energized the Muslim masses in Turkey. The secular, European culture that had dominated the country is confronting the increasingly powerful claims of the religious. The fundament political and social question is how to create a single polity built around two divergent cultures. Neither can be dismissed. Turkey is a Muslim country that was modernized by secularism. If you destroy the secular, you demolish the accomplishments Turkey has made thus far. If you attack the Muslims, you inflame a religion that, having been aroused, cannot capitulate. Turkey has become a republic of mutual contempt and distrust. Whoever governs Turkey will be riding a tiger. If he falls off, Turkey will be torn apart. If he stays on, the tiger – simultaneously secular and Muslim – will have to be afraid of the rider. 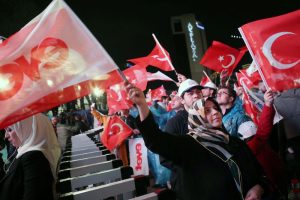 Supporters of Turkey’s president celebrate as they wave Turkish national flags during a rally near the headquarters of the Justice and Development Party on April 16, 2017 in Ankara after the initial results of a nationwide referendum that will determine Turkey’s future. ADEM ALTAN/AFP/Getty Images

Secularism’s way of accommodating religion is to create a radical distinction between public and private. Religion is to be part of private life, while the public sphere should stay neutral on religious matters. To put it differently, public life would be secular and people would be free to choose how they want to live their private lives. The problem is that secularism is not neutral. It is a vision of a just world. It is built on the extraordinary assumption that a radical distinction between public and private life is possible. If you believe that the universe has a divine purpose and that your life is part of that purpose, how can you confine that belief to the hidden realm of the private? How can a culture banish its ancient beliefs from public life but remain unified?

Secularism asserts that it is neutral because it does not incorporate any of the traditional religions. But the problem is that secularism, while not a traditional religion, nevertheless maintains moral claims, and with them a belief in the nature of humanity and its purpose. It does this by asserting the centrality of the individual and his right to make choices. None of us develop or live our lives as individuals, separate from social influences. Secularism takes a leap of faith when it asserts that a society can be built around the individual – he is born to a family in a place with a past, a language and a culture, yet he is expected to be autonomous. Even the idea of human autonomy is a moral claim. In other words, secularism is not neutral but a competitor to other religions, lacking any God but the individual.

At first, the secularists see the re-emergence of self-confident religiosity as merely the rise of the unwashed. Then, they see it as an enemy of freedom. In failing to understand that the secularist claim to moral superiority needs to be justified and not asserted as self-evident, secularists find themselves on the defensive. In assuming that the privatization of religion is in itself a stable solution, they undermine the foundations of secularism. Unlike Thomas Jefferson or Giuseppe Garibaldi, modern secularists are bad politicians. They don’t know when they have to cut a deal.

Secularism has achieved extraordinary things. Its handmaiden is science, and science has delivered. It has doubled life expectancy in advanced countries in a century. It has made traveling between continents in an evening possible. It has created patterns of life never seen before. Religions could not achieve these things because they did not see them as essential. Religions did not search for the meaning of the world, as they believed it was already revealed.

But secularism also brought horrors. It gave rise to ideologies – visions of what humanity ought to be. These were not only expressed in writing but put into action. Fascism, communism and liberal democracy were all spawns of secularism. The regimes that some of these ideologies inspired in the 20th century make al-Qaida’s abilities, if not intentions, pale by comparison. A secular vision of humanity – coupled with the power of technology that secularism had released – created a global reign of terror. Liberal democracy defeated the other ideologies. I think the most moral won, but it set the stage for another challenge. The claims of our fathers’ faiths remain. It is much like the relationship between Judaism, Christianity and Islam and the paganism they crushed. That paganism has never stopped haunting, and in some limited ways secularism is the modern incarnation of paganism.

Turkey is not the only region dealing with the struggle between the rule of secularism and the claims of religion. Europe and the United States are also facing this issue. At the same time that the religious increase their assertiveness, secularists become more aggressive. They seem to believe that, as a Jew, I am deeply hurt by a Nativity scene in the town square or by someone saying Merry Christmas or Ramadan Mubarak. The more radical secularism becomes, the more powerful its critics will become. Deeply held suppressed beliefs are far more dangerous to me than the state acknowledging what we all know, which is that the United States has Christian roots but is now a nation of many beliefs.

This struggle is particularly evident in Turkey. It is the place where Christianity and Islam met, merged and created something new. Istanbul is, after all, the seat of Constantine, who was the political founder of Christianity. It is the city of European secularism, confronting the renewed authority and power of the old religion. Secularists view that religion as primitive. The religious view themselves as the keepers of ancient truths.

Turkish President Recep Tayyip Erdoğan is seen as a monster by secularists in and particularly outside of Turkey. They are making a huge mistake. He is the leader who is not only petting the tiger but riding it. If he cannot reconcile the secularists and the religious, what will come after him will be far worse. The rule of the secularists in Turkey backed by the army is over. At the same time, we are seeing a transformation of secularism from a system of toleration that accommodates private beliefs in public life, to an attempt to exclude those beliefs from the public sphere.

All ideologies tend to the “reductio ad absurdum” because they are driven by ruthless logic. For secularism, the distinction between the public and private must be maintained at all costs. In the 21st century, the past is reasserting its claim on the public sphere. At the same time, secularism is proclaiming that God must be kept out of public life and that the secularists are his only prophet. This will lead to more Erdoğans and, if they lose, to worse yet.